How can u help these very needy light brahmas?

I have two three week old light brahmas. I think a boy and a girl just by the way they act. I’m going to keep both but they’re very needy. At night when the lights in their room go off, I have grow lights in there for my plants that they also sun bathe under, they freak out. The lights are on a timer. To turn on when the sun comes up and go off when it sets. They start cheeping like crazy, so loud, until someone goes to sit with them. They have a brinsea heat plate and stuffies that keep them company. The stuffies are under the heat plate and they roost on them. They also have a mirror. But it doesn’t seem to be enough. They want a person to sit with them. I thought they were cold at first but the room stays at 80F and they have the heat plate. Anything I can do besides sit with them all night? 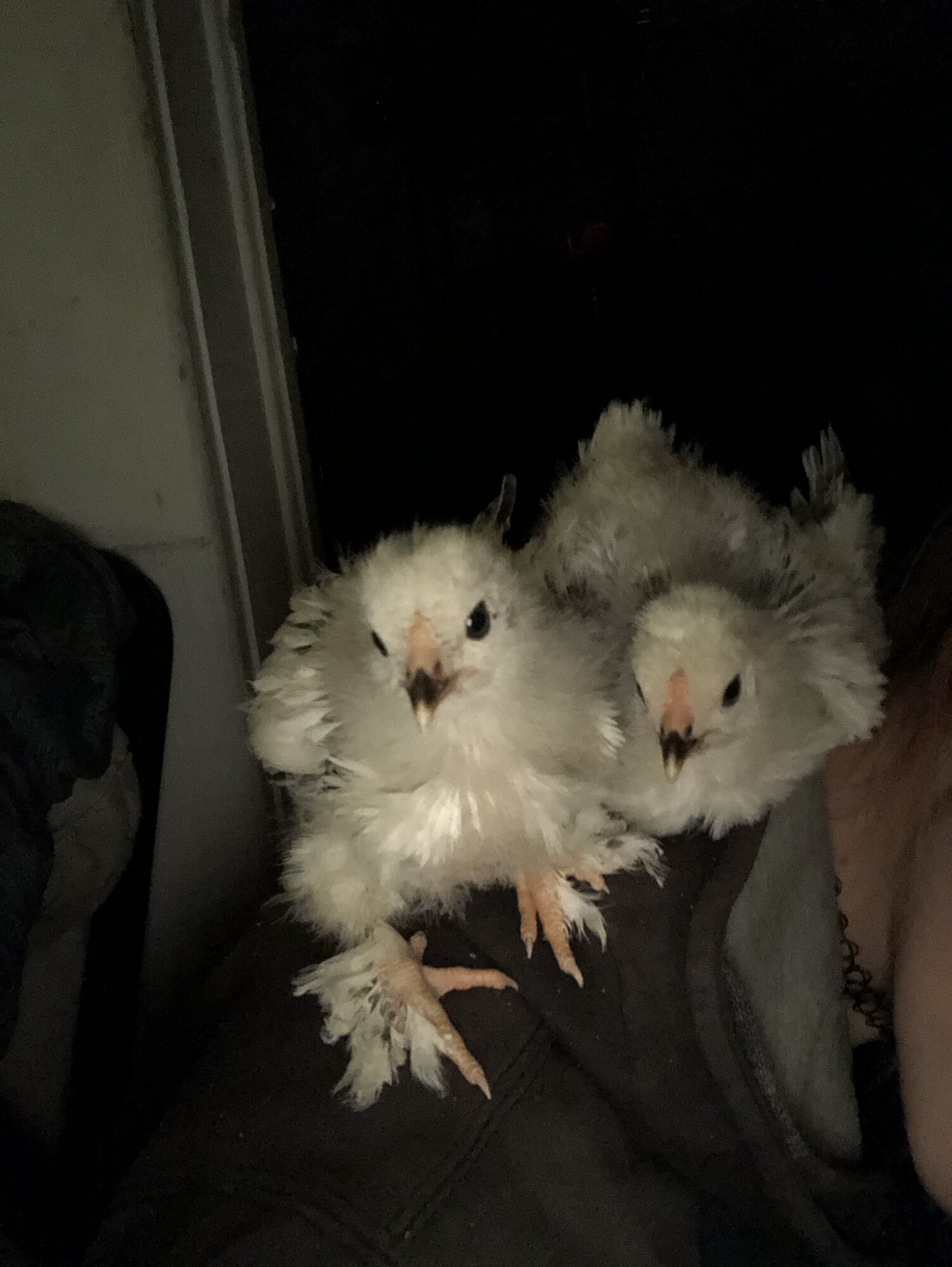 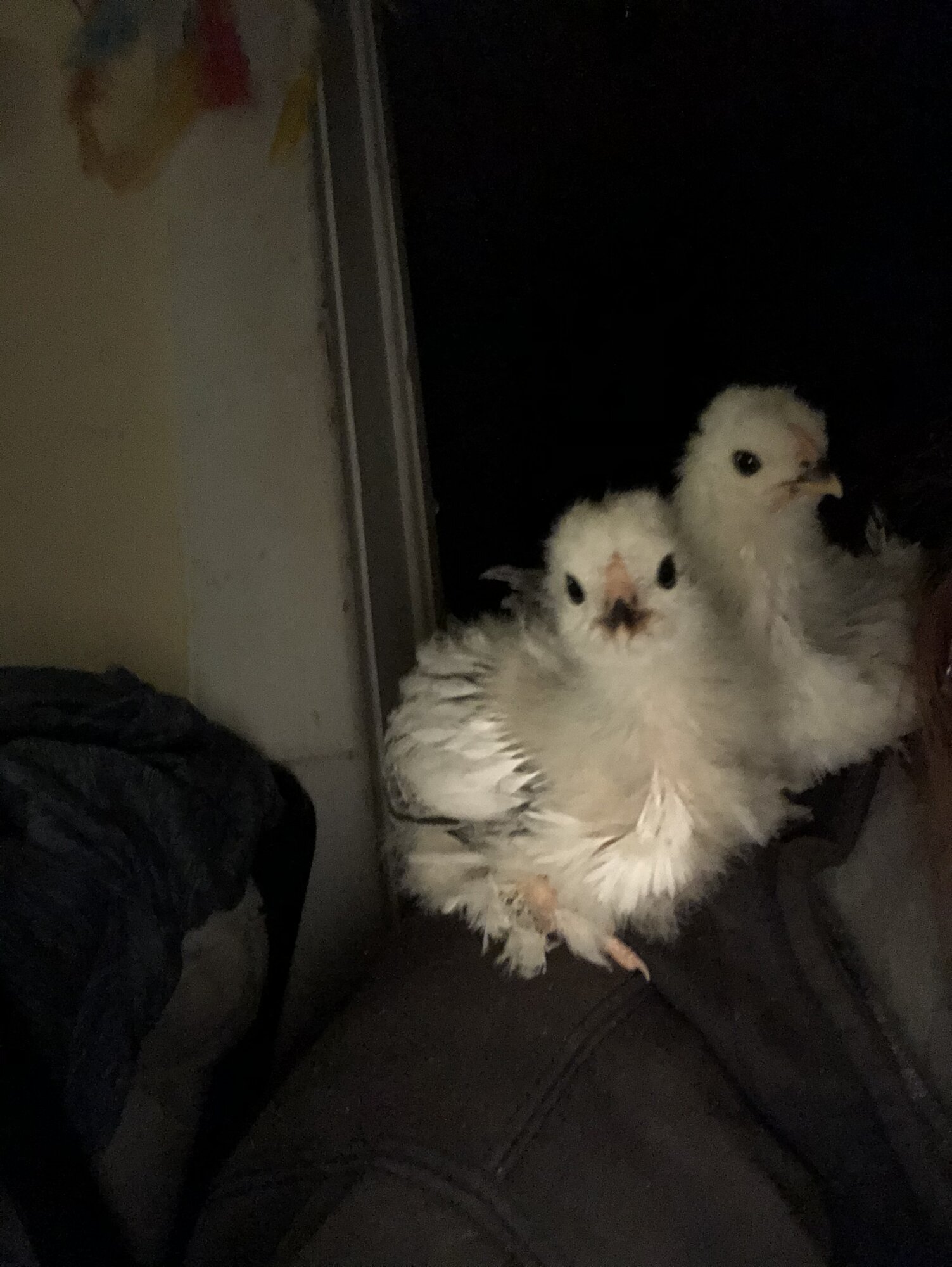 It's probably the fact that lights suddenly go out. They should calm down eventually, it's just a sudden change and they can't see well at all in the dark, so they may not be able to find the heater easily if they were far out in the brooder

JacinLarkwell said:
It's probably the fact that lights suddenly go out. They should calm down eventually, it's just a sudden change and they can't see well at all in the dark, so they may not be able to find the heater easily if they were far out in the brooder
Click to expand...

That’s what I thought it was too at first. So I left a heat light on for them instead of the heater and they got more upset. Maybe because the light was new they got upset? They seem to calm down if I leave them. But it takes so long. And when I hold them they do a snuggling thing with their head into my elbow. Are they looking for a place to hide? I’ve had other chicks do this and couldn’t find an answer for it even with those chicks. I just assumed it was to get under the hen.

the bird on the right is a cockerel and the other is a pullet. i agree with @JacinLarkwell about the lights

chickenhappy1233 said:
the bird on the right is a cockerel and the other is a pullet. i agree with @JacinLarkwell about the lights
Click to expand...

I had a feeling he was a boy. He’s much bigger than the other and postures much more. My husband loves him though, so far, and we plan on keeping him. I also want to breed them. Would a night light help? Or just confuse them more? I’ve thought about putting one in because I figured it was the lights. But turning on the red heat lamp seemed to upset them more. Maybe a white light night light?

So I gave them a night light and it seemed to upset them more. They were louder than ever. Could it be too hot in the room I have them in? It stays between 80 and 90F. Is that too hot for now 4 week olds? When they yell they stay by the door to the room.

Pretty babies! Try dimming the lights for ten or fifteen minutes before you shut them off. Making the change gradual may help them adjust.

I think 80 to 90 is too warm for them at 4 weeks. Decrease the heat. If there is a heat plate they will go under it if they are chilled.

I had the same problem, but was too soft to let them cry it out!

I would move the entire brooder (a storage tub) into the hallway, which was darker than the living room, but not completely dark. I'd let them snuggle on my arms until they fell asleep, then would gently put them back in the brooder. They'd generally wobble over to the heating plate, and fall asleep again. I also kept a cardboard piece on top to cut down on light.

It sounds like a chore, but they were so cute. They vied to snuggle in my elbows, too. In the end, it worked out, because it was really easy to transition to the coop. They'd still snuggle, and I would just put them on the ramp, and in they went.

love when they snuggle.

I'm thinking it's the change that upsets them. They should get used to it. They seem to be feathering nicely. I think anything higher than 80degrees might be too hot, since many of their feathers are starting to come in already.