I got really bored a few days ago...(Pic included!)

...so I decided it was time to use my everyday-life chicken drama to create a new drawing! So, okay, a few WEEKS ago I made this, but still, I only just uploaded it now. 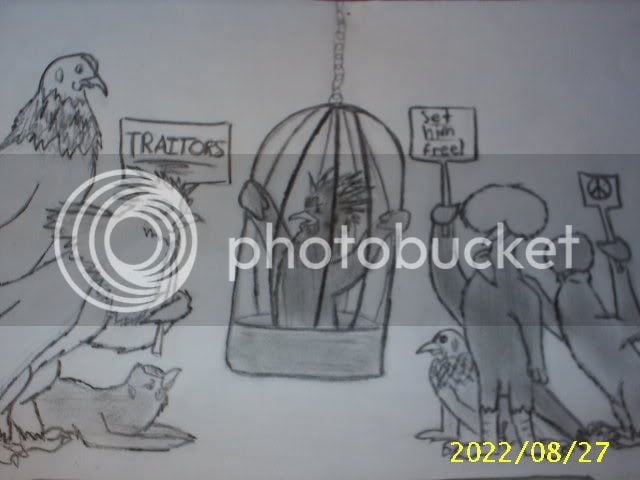 This is, basically, about my chooks taking sides over our newest addition, Dash. (The one in the cage.) Fuz, the spiffy Sultan roo on the left, was currently in a big fight with him at the time (and is now sadly 6 feet under, due to a freak accident.) Cae, the Silkie roo bending down is eyeing Dash with a skeptical glare, as usual, because he is untrusting of just about everyone. Norma our Columbian Wyandotte really has very little say here. She's Dash's girl but still opposes to the constant mating.

Patty (Polish) and Tosca (Patty's and Fuz's daughter) are in favor of Dash's release. Both love him dearly. Woodstock (Brahma) also has very little say here.

Dash is leaving us in a few days due to the fact that every bone in his body is a mean one and we can't handle him anymore. Just attacked my younger brother and, I was told, CHASED him around the yard. This picture represents that he'll only be harmless when locked up, regardless of who opposes. He divides our whole flock.