Hello! I'm new to chickens and have 3 approx. three-month old pullets. Started with 4 but a raccoon ended up getting one and after a couple weeks we've finally got a new hen to replace the one we lost. I managed to find a pullet that is almost the same size as the other three but after putting her in the coop two of the other three are picking on her and she's relegated to standing in a corner (she did end up forcing herself into their little sleep huddle last night though). She is getting food and water when they move up in the roost (or when I let them out to run around) but she is a really sweet bird and I hate to see this happening. Does anyone have any tips? I'm just assuming that time is the only thing that works and that eventually they'll come around to accepting her... I'm hoping that someone will tell me that it shouldn't take too long though as I feel just awful about it!

I just went through this myself. I just put my two new ones in a cage in the coop for a couple weeks. They could see each other but not get to each other. Then removed the cage, there was some pecking at first, and still is a little, but it gets better every day. It was sad at first cause my two new ones were 2 weeks younger and they made such a big deal when the older ones came around. I think they were faking it for attention.

I had actually thought about putting her in a little cage in there with them but the coop isn't very big to start with and she'd have to be in something pretty small... Right now I was thinking that as long as it doesn't get any worse (for example I see two of them ganging up on her at once and maybe really hurting her) I'd let her stick it out in the cage with them. I think it would be going better but for the fact that one of my girls is kinda crazy (and the other likes to copy what she does). Look at this face and tell me this isn't a crazy little bird! 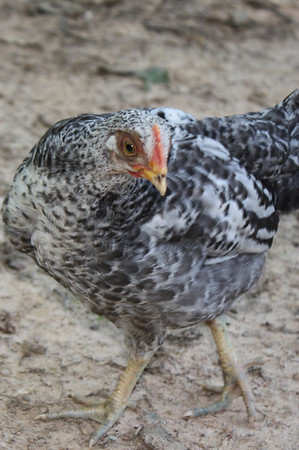 My BIL told me as long as they are not holding her down and pecking its head its ok. Just establishing the pecking order. He said let them work it out. It's so hard though....when I would go out in the coop my younger ones would jump up on me to get away from the older girls. I think they were way over reacting though.

So far they have been just hit and run kind of attacks. It seems like it is the case of them wanting to show who is boss. When we first put her in though we were amazed. The three surrounded her and just stood there staring her down - very intimidating chickens!

M
How long till they accept her?
2

New chicks and a bully