The main question up front - details why I'm asking to follow: Can I just put the six new 7 week old chicks (5 for sure hens, 1 maybe roo) in the coop/run tonight, hope they roost with the existing chickens, and then let them 'run' with the older (six month old chickens - 8 hens, 2 roos) and go out and free range during the day?

Now for the details: Chicks have, for many weeks, been out in the yard under a trampoline with hardware cloth around it during the day, and the existing flock has 'visited' them regularly. We have had no concerns about aggression of the existing flock toward the new flock. 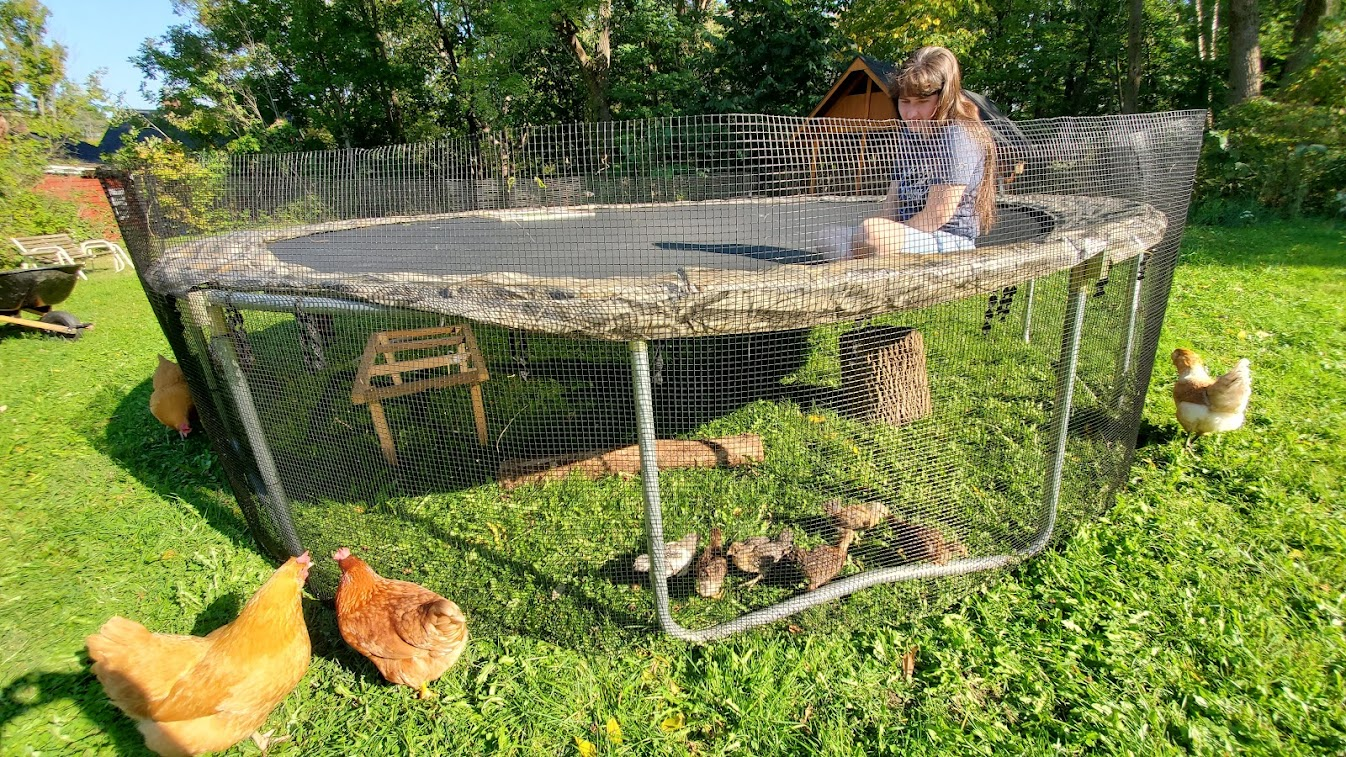 I ask the question, because when we put the original 10 out in the coop/run, we just kept the door closed for about a week so they would learn where their home was, and then let them out to free range during the daytime after that. It worked great!

So my questions are these: Do we keep all the chickens closed in together for about a week so the new chickens learn that it's their new home? Or will they just go with the flock when/if we let them out and come back when they come back?

I can't contain just the young chickens and close the door for the day - the older hens come in and out throughout the day to use the nesting boxes.

I know the older chickens will be miffed if they don't get their outside time, but I don't want to jeopardize the younger chickens, either.

We also keep the pop door open to the run for the 10 original chickens. Food and water are in the run - they are free to come and go from coop to run. Should we close the pop door at night to keep the younger chickens in - translation - to keep the bigger chickens from chasing them out? Would they do such a thing?
If we do close it, should we put food and water in the coop for the younger chickens who are used to having it in their brooder (we did this for the original 10)?

I'm also considering putting a cardboard box or two in the run for 'safe' places for the chicks. We'll also be adding a feeder to the run, and have a third feeder, if we need to add another. Two waterers are available now. 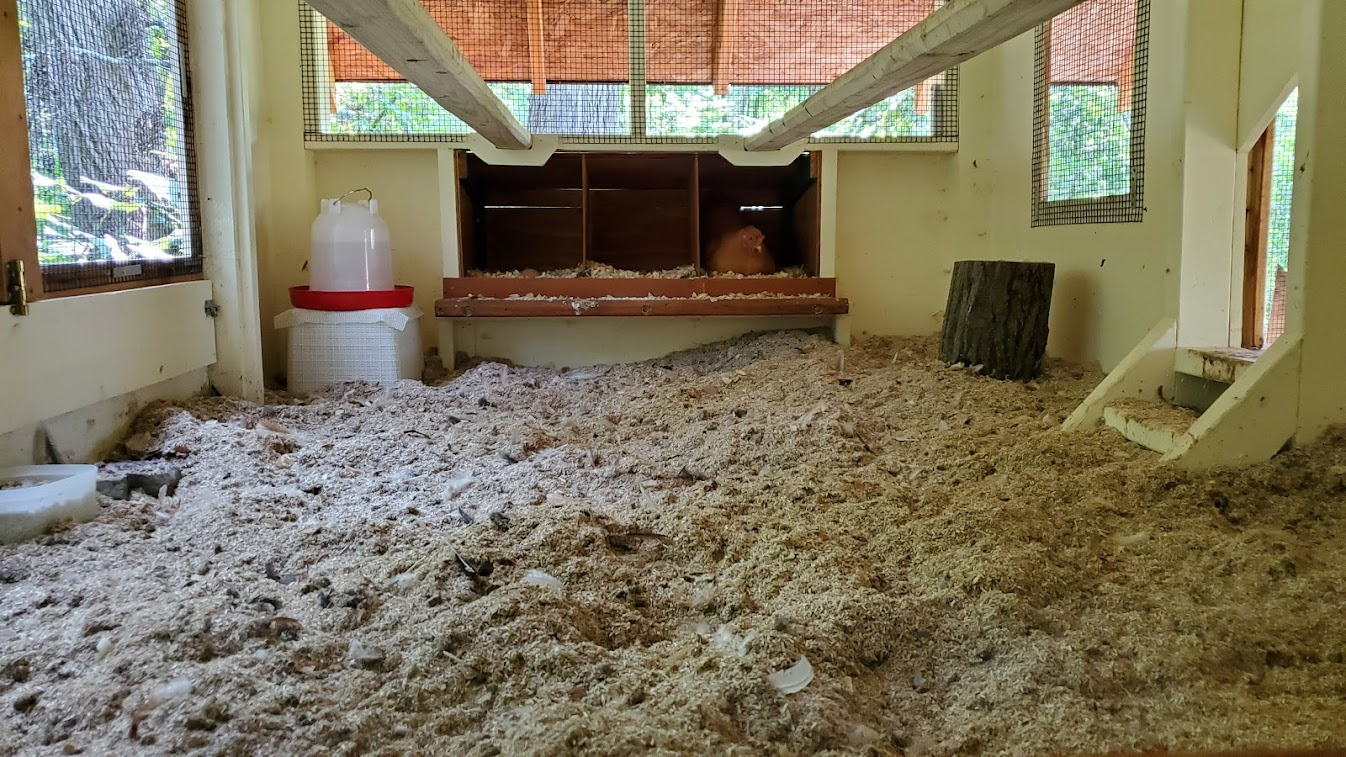 (Cardboard is currently on the windows for nighttime drafts. We've had Covid in our household of 8 this month, so we're behind on getting the windows installed - will be happening in the next couple of weeks) 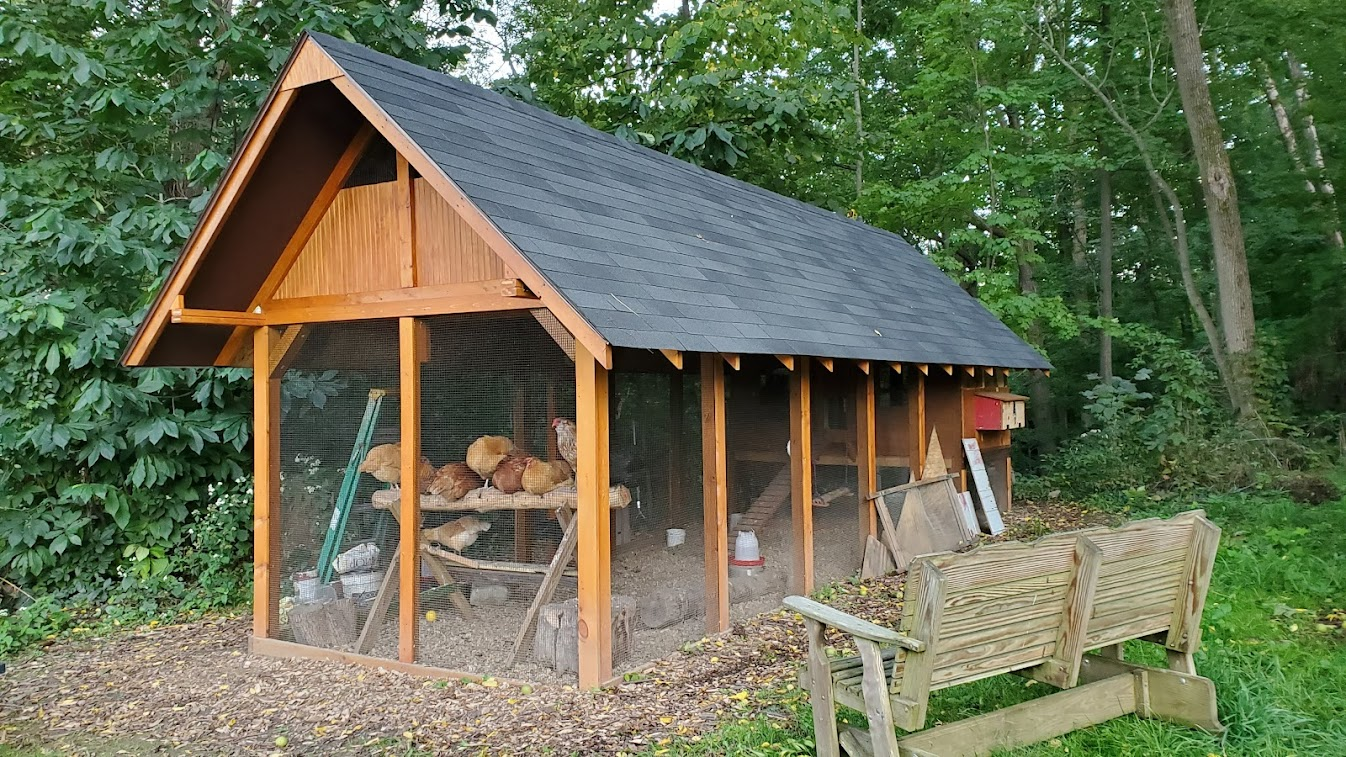 Wendy Bee said:
I ask the question, because when we put the original 10 out in the coop/run, we just kept the door closed for about a week so they would learn where their home was, and then let them out to free range during the daytime after that. It worked great!
Click to expand...

Yep, that works great...but integration is a much different scenario.


Wendy Bee said:
Chicks have, for many weeks, been out in the yard under a trampoline with hardware cloth around it during the day, and the existing flock has 'visited' them regularly. We have had no concerns about aggression of the existing flock toward the new flock.
Click to expand...

But they haven't shared space, feed, and water......correct?

Might be best to fence off under the coop for the chicks to live 24/7 for a week or two.
That will 'home' them to the run anyway.
How big is the coop, in feet by feet?

Too bad the chicks are probably too big for 'tiny doors':
https://www.backyardchickens.com/articles/integrating-new-birds-at-4-weeks-old.72603/

Here's some tips about.....
Integration Basics:

It's all about territory and resources(space/food/water).
Existing birds will almost always attack new ones to defend their resources.
Understanding chicken behaviors is essential to integrating new birds into your flock.

Confine new birds within sight but physically segregated from older/existing birds for several weeks, so they can see and get used to each other but not physically interact.

In adjacent runs, spread scratch grains along the dividing mesh, best if mesh is just big enough for birds to stick their head thru, so they get used to eating together.

The more space, the better. Birds will peck to establish dominance, the pecked bird needs space to get away. As long as there's no copious blood drawn and/or new bird is not trapped/pinned down and beaten unmercilessly, let them work it out. Every time you interfere or remove new birds, they'll have to start the pecking order thing all over again.

Multiple feed/water stations. Dominance issues are most often carried out over sustenance, more stations lessens the frequency of that issue.

Places for the new birds to hide 'out of line of sight'(but not a dead end trap) and/or up and away from any bully birds. Roosts, pallets or boards leaned up against walls or up on concrete blocks, old chairs tables, branches, logs, stumps out in the run can really help. Lots of diversion and places to 'hide' instead of bare wide open run.
Good ideas for hiding places:
https://www.backyardchickens.com/threads/a-cluttered-run.1323792/

What are the chicks sleeping in now? I would place that in the run of the coop/run at night. After they go into that where it is now, move it to the run. Let them out in the morning. I use a dog crate for this, and is easy to move. If you don't have something easy to move. Lock up what you are using where they are, and introduce a dog crate, so they home to that.

Put the crate on the floor in the run, move to the coop at night, repeat. Then when they seem to be confident with that ramp, leave the box in the coop. And then check at dark, to make sure they made it.

Okay, so here's how it's worked out, and it's going really well

aart had suggested putting the young chickens under the coop. That was a great idea - I could leave the run door open and the big chickens would still have access to coop and nesting boxes for egg laying and the rest of the run for food, water, and shelter. 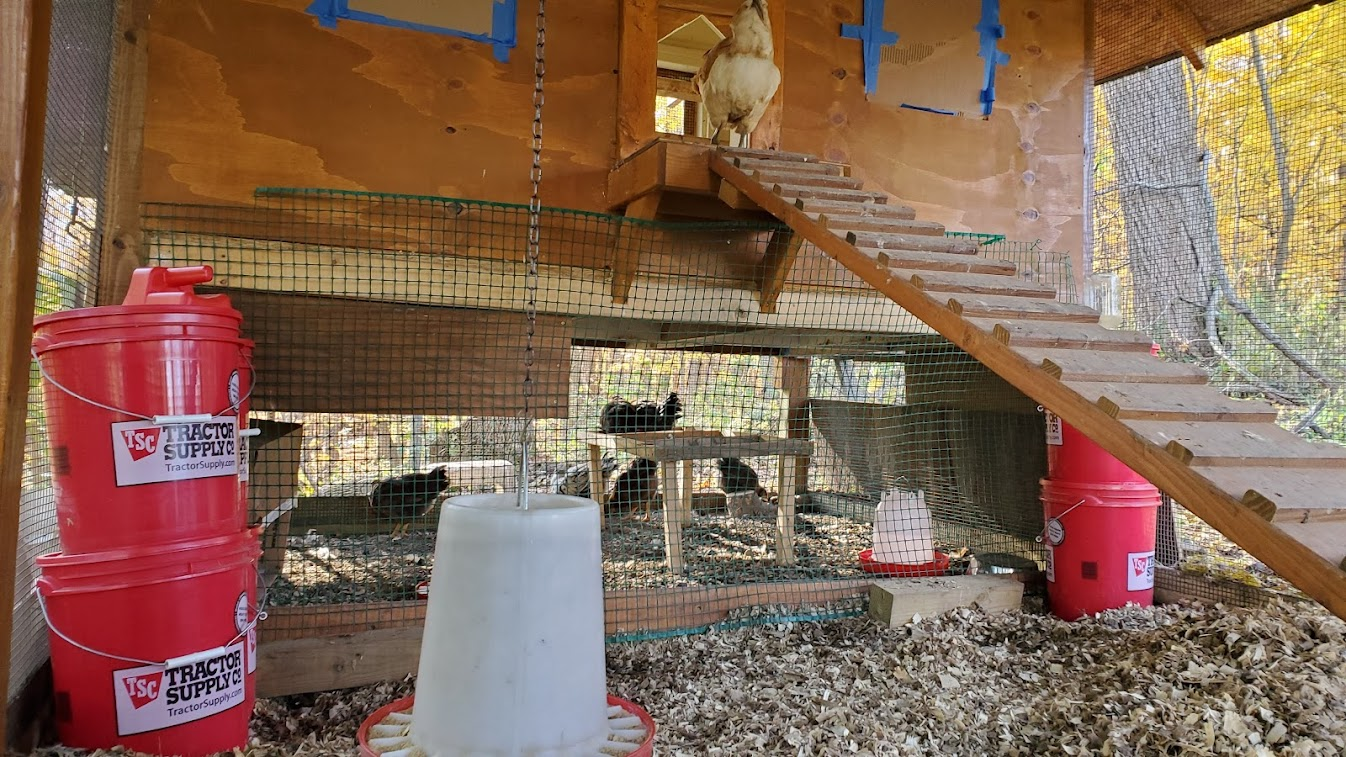 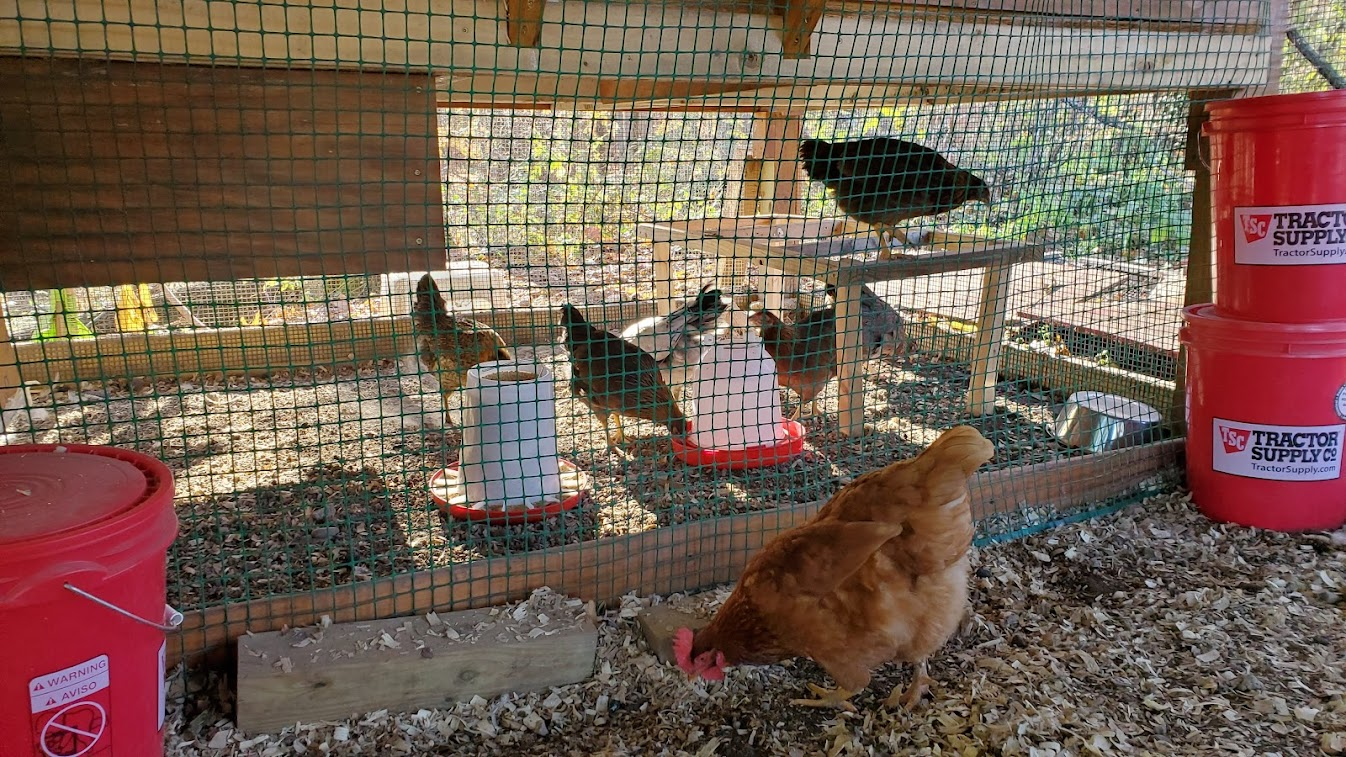 We're in Central NYS, so nights have been pretty cold here (30's and some 20's), so didn't feel like it would be warm enough under the coop (no real shelter for warmth/blocking wind). So the littles sleep in the coop with the big chickens at night. Here's how that's going:

So for the first week, at dusk, I went out to the coop/run and gave everyone some scratch, throwing some along the divider so the littles and bigs could eat together while not having access to each other. Then I let the big chickens go up into the coop on their own. They settle on their perches pretty quickly. Then I let the littles out from under the coop and let them have the run of the run for a few minutes. For the first week or so, I needed to put them up the ramp and into the coop. Now they go up on their own really well. I did have to go to the coop doors on the back and open them up and help the littles up on the perches, but almost all of them have the hang of it now. After the littles are in, I close the pop door, which usually I leave open, but I don't want the bigs chasing the littles out into the cold.

The littles kind of stick together, but every now and then, one will snuggle up to one of the big hens or roosters. The roosters are VERY tolerant; the hens - it depends on the hen. I make sure they're all settled and safe, close up the back of the coop and all is quiet!

I go out in the morning and open the pop door and they're all ready to run out. The littles don't exhibit any PTSD or injuries, so they're faring well through the night and until I get out there in the morning. The littles scurry around a bit and then go to their place under the coop. Once in a while I need to shoo a big chicken out of their space, and then I put up the plastic fencing barrier.

It's been about two weeks, now, and yesterday I started taking down the plastic fencing about an hour before dark and let everyone mix. Big chickens usually have wandered back into the run by then, and when they see me coming they know I'm going to give them scratch, so if they're not in, they come running

There have been a few squabbles, but nothing serious. I would consider those occurrences to be the start of the pecking order working itself out. We have a few sloppy cold days coming up, but after that, I think I will let the littles out without the barrier up and see how it goes. They have breached the barrier once or twice, and did go out of the run, but stuck pretty close (like the outside perimeter of the run).

So overall, I'm very pleased with how it's going. I'm even more pleased to have the brooder out of my house

After we winterize the run (clear vinyl just arrived), I'll likely leave the pop door open again and see how that goes.

Thanks for the tips, it's going really well!

Wendy Bee said:
so here's how it's worked out
Click to expand...

My littlies (just turned 5 weeks old) have given themselves free reign of our run with no real squabbles from the big girls, but are disinterested in going to the raised coop (quite similar to yours) in the evening, so still trying to work that part out. They won't follow the big girls in, but do play on the ramp from time to time.