It's official, her name is Peggy!

She was my girl who would refuse to go into the coop sometimes this past winter and either her feet got frostbite or she was the chicken found hanging upside down last fall in the coop, foot tied to a string (no idea how that happened, it was a bit freaky). I kept her in the house that night, fully expecting to have DH dispatch her to chicken heaven the next morning. Both of us are wimps when it comes to killing anything but he'll do it if he has to. She hopped around the house all evening, jumping in and out of her box. It was obvious that the dead foot was not slowing her down.

I checked her for any other problems. I found no infection, the 'live' section of her leg looked fine, had no redness and looked like it was separating from the dead area cleanly. I was shocked when the toe on the right foot fell off but looking closely, the majority of them were in good shape - just the two were damaged and only down to the first knuckle. Good thing Silkies have extra - she might not notice them gone.

We discussed killing the chicken and decided that if she had avoided infection and managed to survive in our flock of 100+ as long as she had that we'd let nature continue to take its course and see what happened. I've been watching her daily ever since - making sure she could access food and water. She was still able to jump up into the nesting box area and onto the lower, geriatric roost we have (made out of that plastic covered closet material).

When I found her today - out in the 'spa' - I noticed she wasn't balancing on one leg - the foot had fallen off and she is hopping around on it fine. The run area is muddy and I have to wait until DH comes home to catch her, so I haven't had the chance to make sure it is all healed. Tonight I'll wash it off, check it off and officially dub her Peggy.

If it isn't completely healed, I sort of hate to bring her into the house until it does because the other chickens aren't paying her any attention. I'd hate for her to have to go through 'pecking order' again when re-introduced to the flock. But no need to worry about something that might not have to happen.

Thanks to all who gave me their opinions and shared their experiences with this problem. Just wanted you to know that she is still surviving and looking ok.

Hooray! I'm glad she's so spunky! We had a canary with one leg that lived to be 12.
Good Luck PEG!

As long as there's no infection, Peggy should be hopping around for a long time.

Thats great news! They sure are a lot tougher than we think. I have a little silkie roo...his names is "Stubs" He is a rescue from last summer. He has NO toes! He was kept in a wire cage, in a lean to of a barn, standing on about 3 inches of poo and rotten feed. There were 15 of them total. Poor little stubs is 1 of the 2 roos left here. ( Need a little roo? )

They all had scaley leg mites something terrible. He he is...right after we got them home. 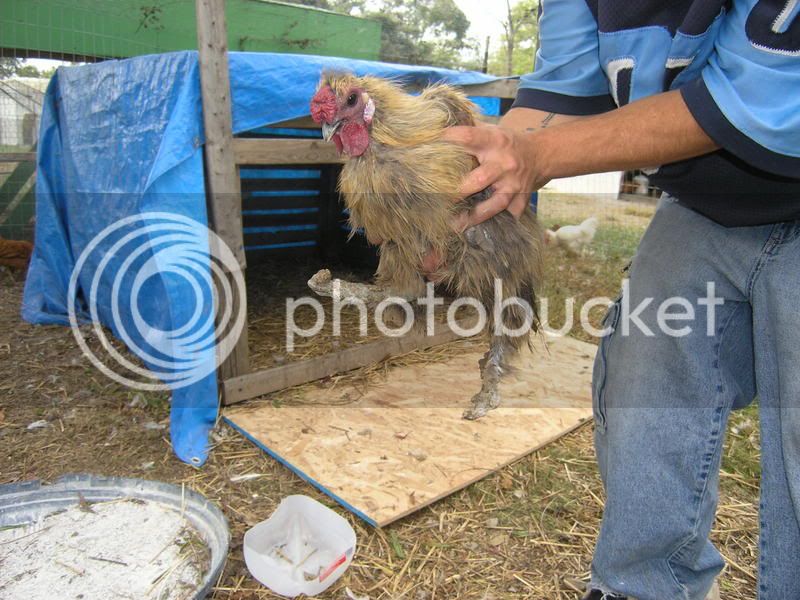 Today, he lives in a pen with 18 week old Langshans..and he IS the " cock of the walk"

When my son came home from work he helped me get her. I soaked her leg and took off the muddy covering. Who knows what was in that!. I put some antibiotic on it, covered it with a clean bandage and put her in a nice clean dog carrier for the evening. Tomorrow we'll change the bandage, let the stub soak in some good ol' Grapefruit Seed Extract water for a while and do the same. I don't think she'll be with the others for a while unless it dries up out there faster than I expect.

Glad to hear Peggy is doing well! Especially that the others are leaving her alone. I'd like to share my rescue chicken, Nefertiti, who only has one toe left on each foot. Her feet were badly infected, but they're healing slowly.

Here she is with her little bandages

That is one georgous bird!

Thanks! She knows it too, the little diva.

It would be great to see a new and improved picture of "Stubs" if you have one?

Hopefully others who have handicapped chickens will be able to connect with us so they will know an ax isn't the only option. That these birds can still live a good life.

I put a nesting box in with Peggy this evening to encourage her to get on with laying her eggs. I can hear her over there scratching around as I type.

I found the foot in the coop this evening when I was collecting eggs and giving them their evening meal. Yuck! But at least without it, she gets around a lot better. Hopefully, she'll remain infection free.

Only one chicken left - what to do?

C
Problem introducing a new chicken to my flock.

How many deaths is "Normal"?