1) Bird Age and Weight
The lethargic hen is an Ameraucana hen that's 2 years 4 months old (born in January 2018). She's lighter than our other two hens (a Rhode Island Red and a Plymouth Rock), but she's always been that way-- there's been no noticeable weight loss recently.

2) Behavior / Symptom Timeline
For the past several (5–6) months, the hen has been having problems with laying eggs. In the beginning, it was sporadic; she would lay mostly normal eggs throughout the week, but then have 1 or 2 failed eggs here and there during the span of a week. (A failed egg being just the yolk and egg whites, with either no shell or an incomplete/inner shell.) The frequency of the failed eggs increased and the frequency of successfully formed eggs decreased, and a month or two ago she stopped laying successful eggs, instead laying only failed eggs 2 to 3 times a week. About two weeks ago, however, she stopped all egg production, with no successful OR unsuccessful eggs anywhere. Since then, she's been pretty lethargic (although still eating plenty if the food is brought to her), and spends most of her day sleeping or laying down in a dark, shaded area. She's walking much slower than normal (she normally runs to food but now just waddles slowly), and she walks abnormally. Her tail is also VERY much pointed downward compared to normal, and she sometimes drags her butt on the ground when she eats and walks. She is also going to bed earlier in the evening and doesn't spend more time than necessary grazing beforehand. Additionally, she doesn't make noise or crow like she used to do constantly with the other hens. She used to jump over the fence of her pen multiple times daily (like clockwork), but for about two weeks now she hasn't done it a single time. It's clear that something is wrong with her egg production system and it's affecting her whole body, but we have no clue what it could be and/or how to fix it.

4) Other Birds
Our other two hens (a Plymouth Rock of the same age and a Rhode Island Red that's a couple of years older) seem to be just fine, very loud and energetic as usual.

5) Bleeding, Injury, Broken Bones, or Other Trauma
None known.

7) Eating and Drinking
I've seen her drinking successfully, and there's no regurgitation that's akin to sour crop (we lost a hen a few years ago to sour crop so I recognize that symptom when I see it). When I bring her food she eats just fine (she ate a bunch of corn this morning, and a bit of banana) but I haven't seen her go out to eat grass on her own nearly as much as she used to. I haven't seen her eating from the feeder (with triple-duty layer crumbles in it), but that could just be because I haven't paid much attention.

8) Poop
Not normal poop-- she hasn't done any solid poops recently that I can recall, and all seem to have traces and/or mixtures of egg in them (white/yellow). They also seem to be very small, liquidy poops that she struggles to excrete. There's also some trace of egg stuck to her butt.

9) Treatment Administered
None thus far-- we tried adding calcium (oyster shells) to the chickens' food a while back (and also recently) to try and fix the egg issue (since she was obviously having troubles creating shells) but she (and the others) would perfectly avoid the oyster shells and pick out the food from the mix. We have wormer (for gapeworms) and a spray for mites that we administer two to three times a year, and all the hens are up to date on that.

10) Treatment Plan
If there's some medicine or veterinary treatment she needs, we can go to the farm supply store or the local vet.

One of her "unsuccessful" eggs that she no longer lays: 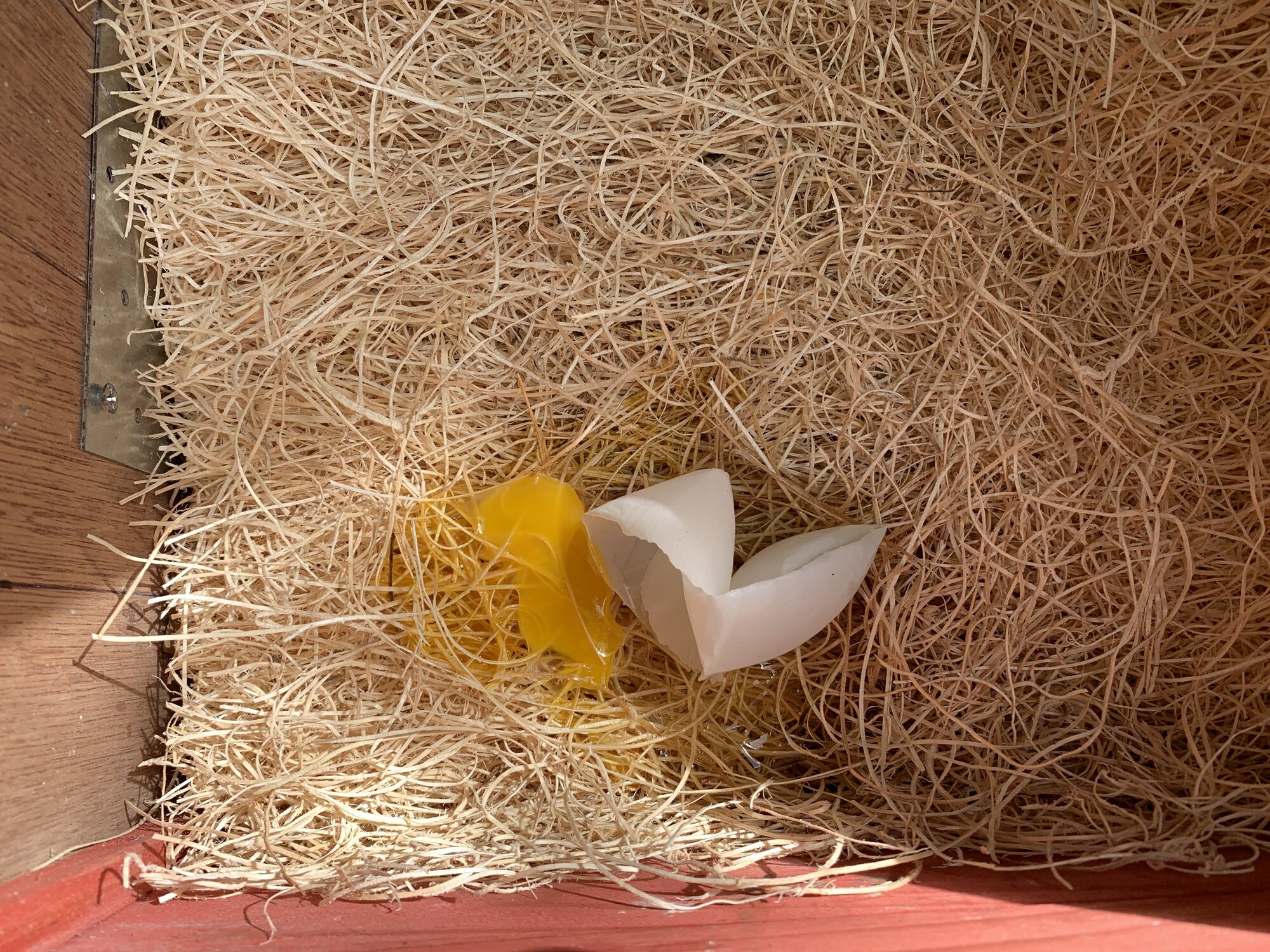 Eating a lizard while half-sitting with her butt on the ground: 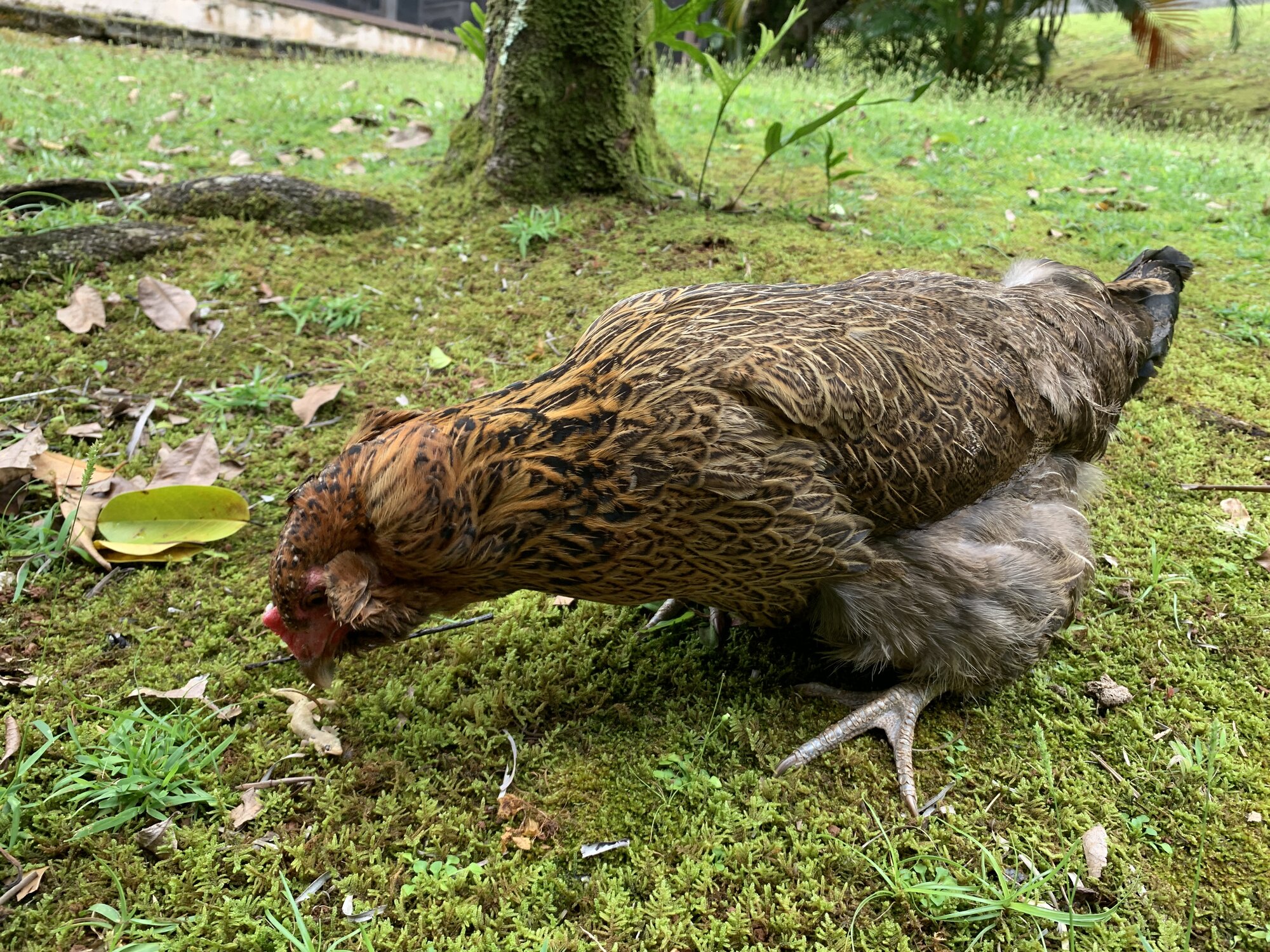 Continuing to half-sit after eating: 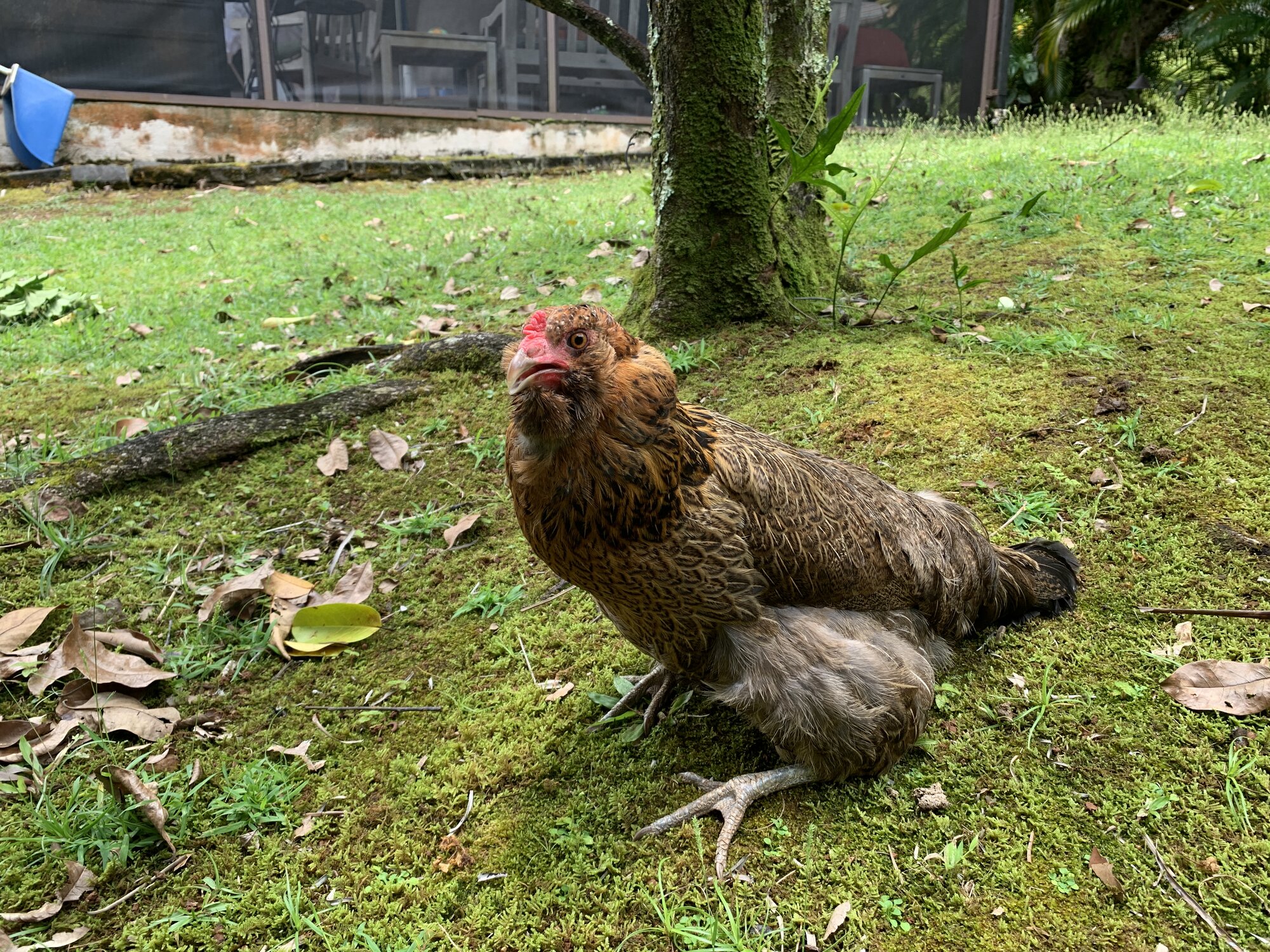 Sitting this morning with some yolky-type stuff on her butt, while the others happily forage:

12) Housing/Bedding
Our three hens sleep in a four-hen coop with sand bedding, although this hen as the lowest in the pecking order sometimes sleeps outside on the covered bar.

This is my favorite hen and I would appreciate any and all help that can be provided as to what could be happening and/or how we can help her recover and get better. Thank you!

It unfortunately sounds like a reproductive issue.
Salpingitis, egg yolk peritonitis, cancer, etc. Your best bet is to try antibiotics.

1) If you feel her abdomen does it feel squishy? If it seems like her belly/bum is dragging it could be ascites.

2) Is her crop emptying overnight?

3) How is her weight? If she loses too much weight, or gets dehydrated then organ failure could follow.

Hen lethargic, not eating or drinking