Apologies in advance for the long post, but my hope is to provide as much detail as possible, and get some suggestions for at-home remedies (or those that can be administered at home) to try and save my favorite bird!

My 1.5-year-old Barred Rock, Raven, has had some runnier-than-normal poops for a couple weeks now, but on Saturday (three days ago), I noticed that she was particularly lethargic. She was unable to jump up onto the patio with the other birds while they free-ranged in our backyard, and when she jumped down the steps back to the grass, she fell over, laid halfway on her side (both legs on one side of her body) and wouldn't get back up. When I picked her up, I noticed she was MUCH lighter than she should be, her head was droopy, and she kept closing her eyes.

We immediately brought her inside to the chicken hospital in our office (warm, dry, and free from the other three birds in my mixed flock). Raven is second from the bottom of the pecking order, but she's also my favorite, as she's the one remaining bird I raised by hand. (That's her on my head in my profile photo.) She is usually vocal, social, and friendly, and will come running to me and do tricks for dried mealworms. Here's her at her usual perky self: 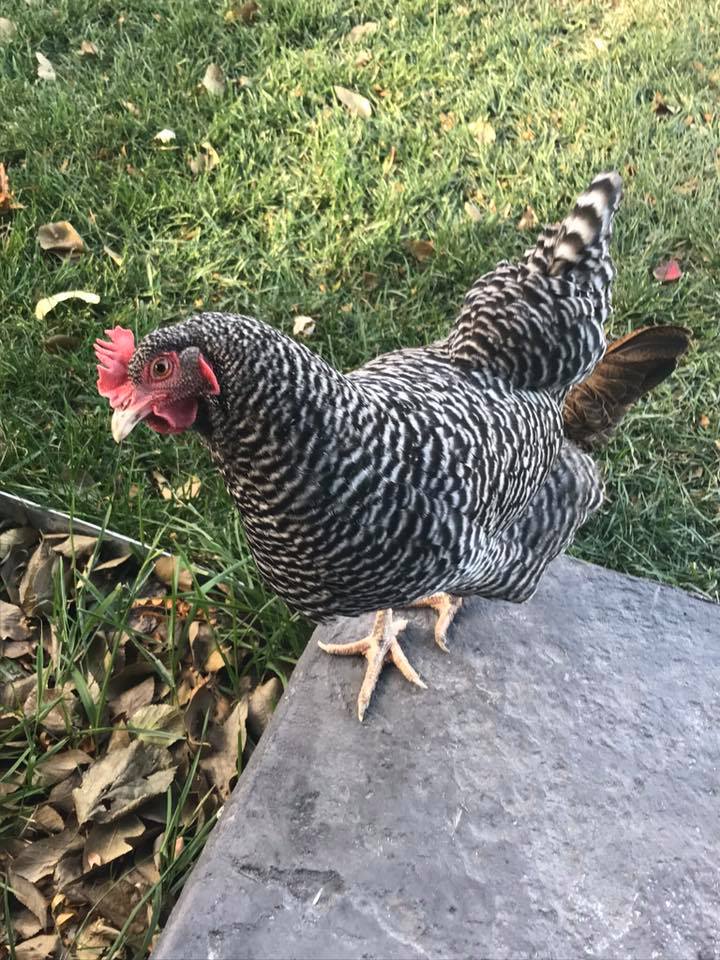 I checked her for visible wounds, and could not find any. Her comb and wattles are shriveled and dry, with a few black marks on her comb that look like they could be from other birds pecking her. Her legs seem dry and somewhat scaly. Her wings are droopy, and she is wobbly when she's able to stand. Her vent is clean, and her poops are watery, greenish yellow or dark brown, runny and VERY smelly, with a sour, pungent scent. When we first put her in her own room, she gobbled up the mealworms and strawberry tops we offered and drank fresh water when I dipped her beak in it, but has barely eaten since. Her feathers are consistently fluffed, despite her body feeling appropriately warm to the touch. Here's what she looks like now: 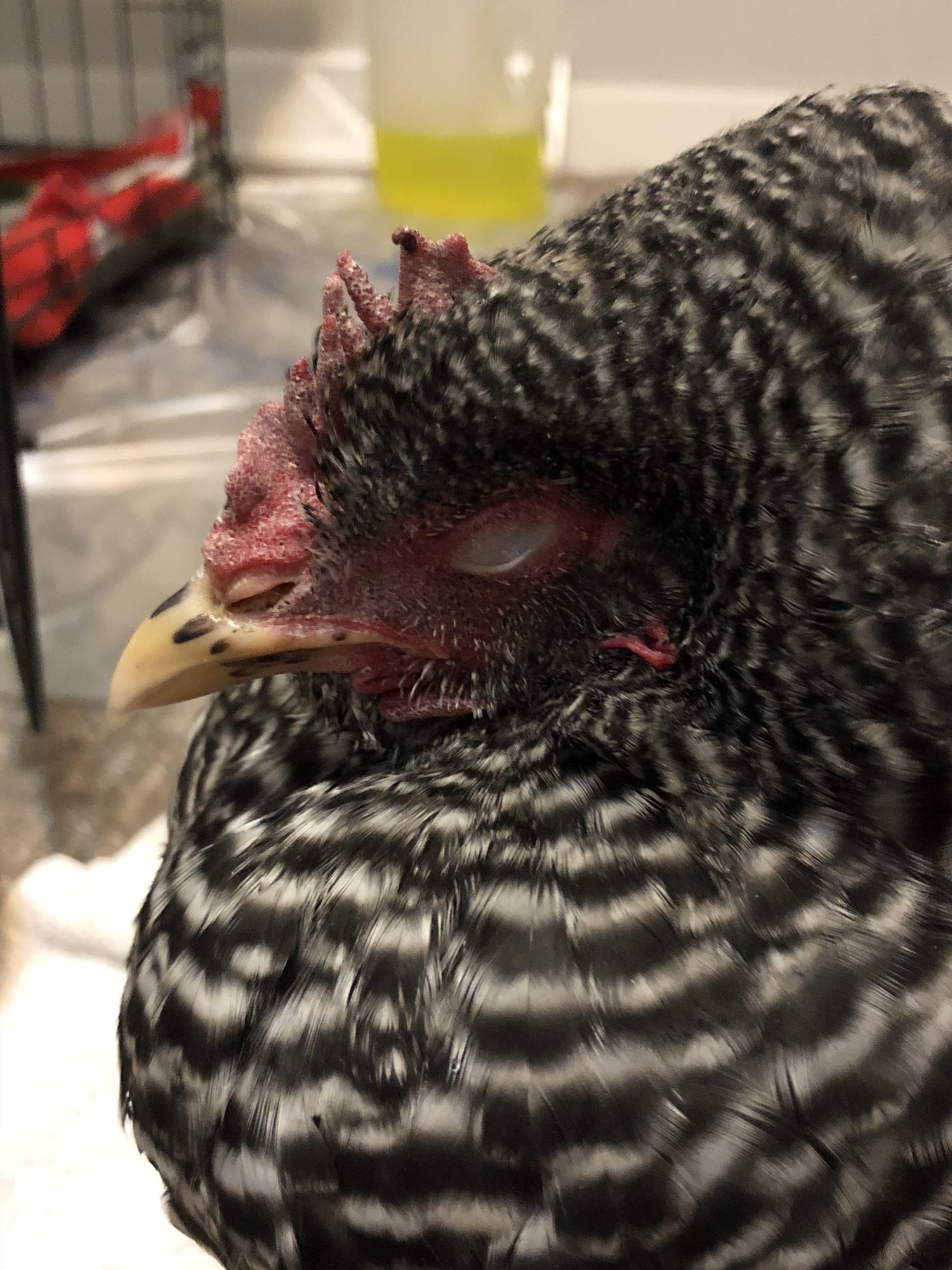 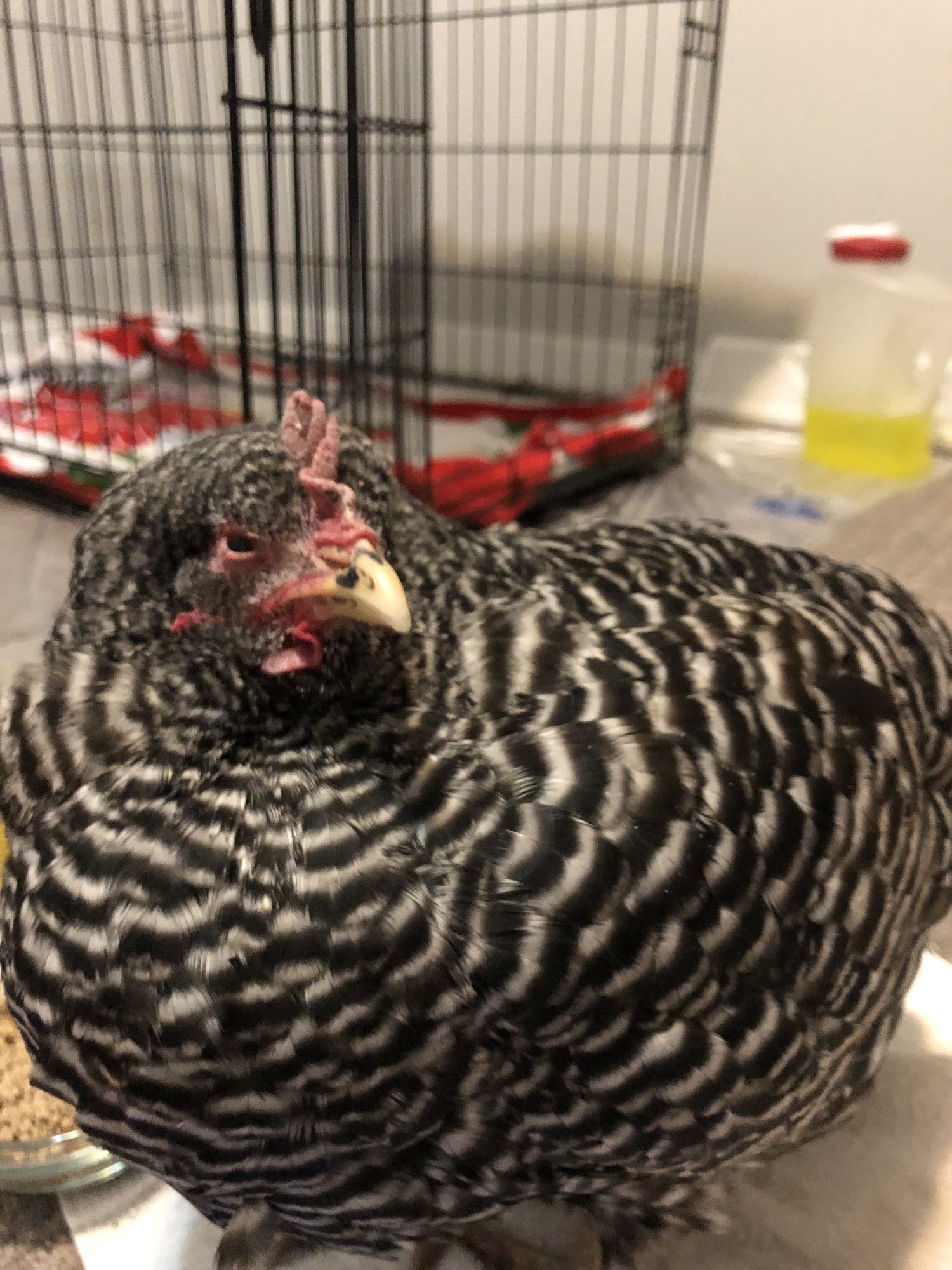 Suspecting that she is dehydrated and given her low weight, we have been giving her chick boost water (we had the mix from when she was a baby) twice daily, about 12ml administered orally, slowly in 3ml syringes. She is accepting that, swallowing normally, and has NOT vomited. Last night she took a few more bites of mealworms and drank several large gulps of water of her own accord, standing up, lowering her head to drink from the bowl, and guzzling with her head up as she usually does when drinking water.

While handling her gently over the past couple days indoors, I have found on my skin some small (maybe 1-2mm long) brownish-red bugs. At first I thought they were silver, but last night and this morning I found two that appeared to be full of blood. I cannot find clusters of these on her body, but the fact that they appear on my hands after handling her leads me to believe they may be the culprit. They appear to have four or six legs, an oval shaped, scaled body, and a rounded triangular head. Here's what they look like.
Live bug, seemingly full of blood: 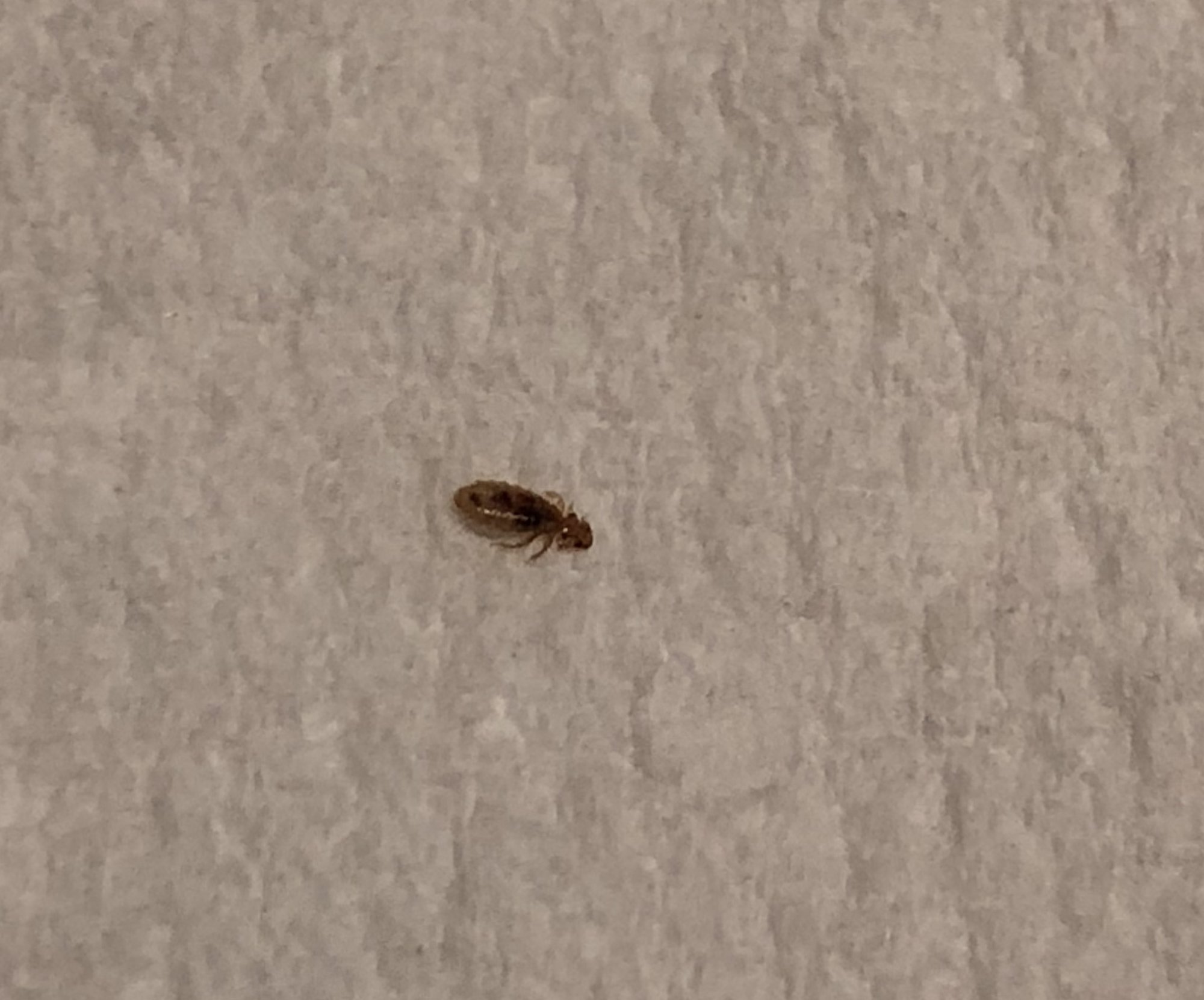 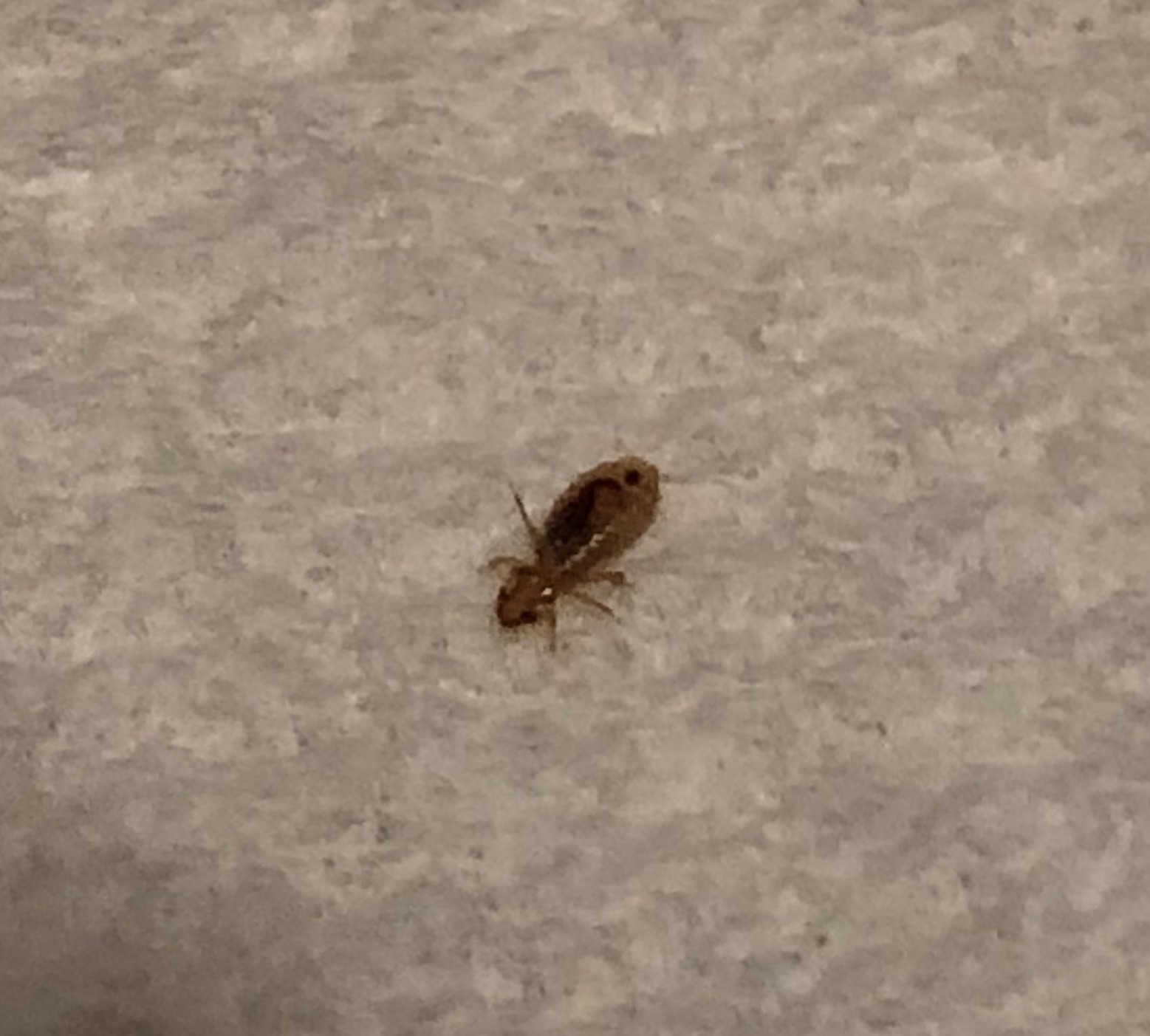 Dead bug, with blood spot(?) that oozed out of its back end after being squished: 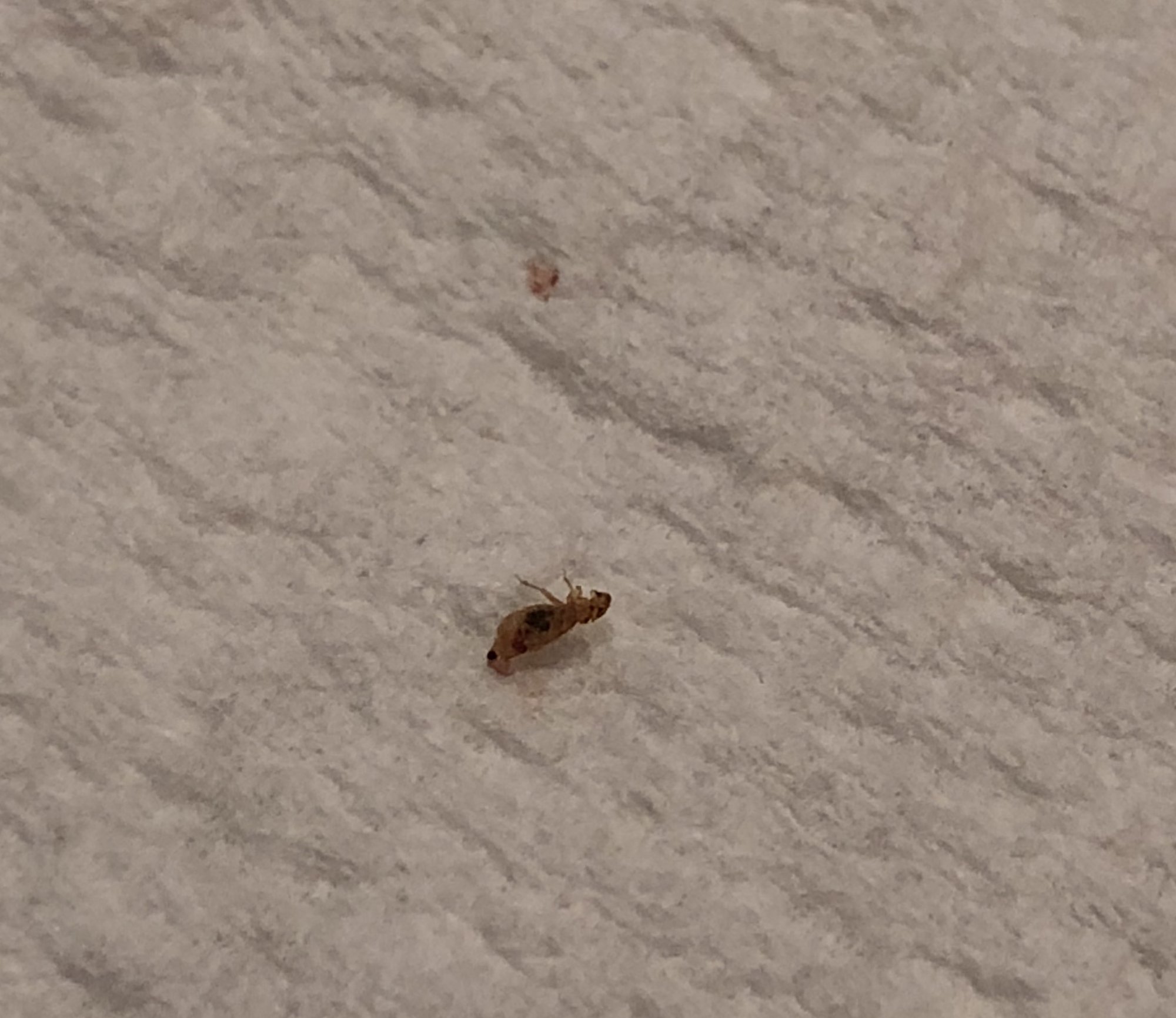 Dead bug with blood spot next to fine-point felt-tip pen for size reference: 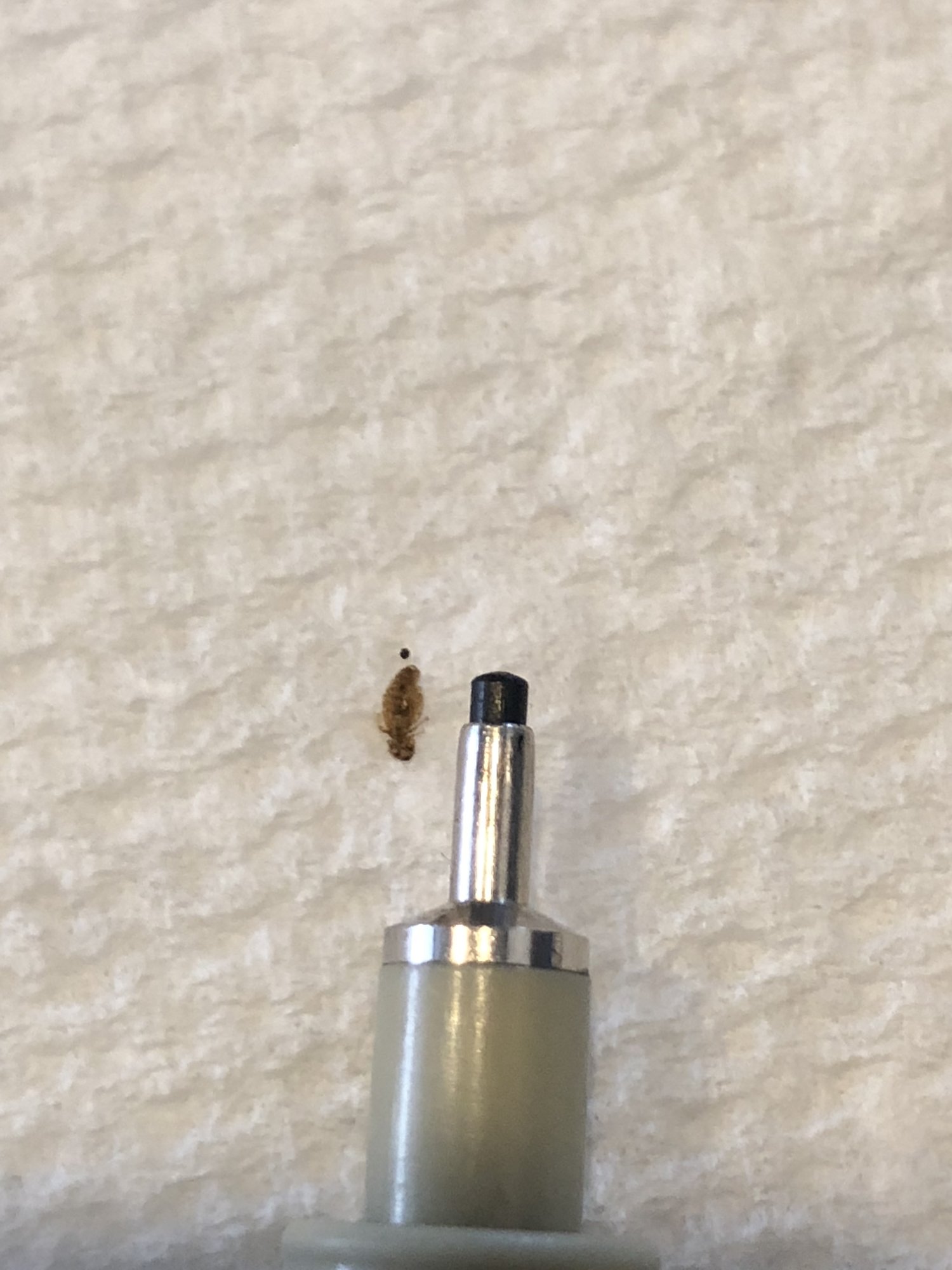 No other birds (two EEs, roughly 2.5 years old, and a year-old BO) are exhibiting any symptoms. All four birds are mid-molt, so they have not laid eggs in about a month, since the sun started going down at 4:30pm local time here outside Denver, CO. It's been cold but dry here, and while their run is filled with sand (mucked out monthly-ish), the coop is filled with pine wood chips that I fully change out at least weekly, and scoop daily. They all free-feed MannaPro Egg Maker crumble, with occasional treats of dried meal worms, and leftover fruits and veggies.

I love this bird, but I can't afford to get her to a vet right now. I'm looking for suggestions to treat the apparent bug problem and help nurse Raven back to health. She is a fighter, and I'm surprised she has lasted this long, given how lethargic she seemed on Saturday. But she is responsive to me, and will periodically stand up (she's wobbly, but can stand), and has been drinking water when she has the energy.

Thank you for reading and for any advice you can offer.

have you tried lice/mite powder? because to me, I might be wrong, those look like like lice or mites. try turning the lights off in the coop and shining a flashlight at the part where the roost connects to the wall, if you see bugs, you are going to have to clean the entire coop and probly keep them somewhere else and get rid of the bugs on them because I think they are draining too much blood from her.But still, I might be wrong

Thank you @silkiemother! Is there a special powder for mites, or can I use DE? I do use that in the coop periodically, but I can douse the place with something else if need be.

DE will not kill mites. here is a good link about mites https://www.backyardchickens.com/articles/mites-lice-treatment-and-prevention.64597/

Thank you @BarnhartChickens98. I also found this link, which appears to feature an image that looks exactly like the bugs I found on Raven. Does the treatment outlined here track with your understanding of how this issue should be treated?
https://pnwhandbooks.org/insect/livestock/poultry/poultry-lice-mite

They look like red mites to me. It's quite unusual to find them on a hen. They live in the coop and suck your hens blood at night.
You need to strip out your coop and get rid of the mites. Permethrin powder, or spray can be bought in the US if that's where you are. You need to spray the coop, pay particular attention to the ends of perches and any end grain wood.
However, the symptoms you describe I think are unlikely to be caused by a few mites. You would need a serious infestation to make a chicken that sick.
The greenish and yellowish poop is concerning, mites won't cause that.
I would give your hen a proper health check. Start with crop function (full at night, empty in the morning)
I would also worm her. Any worming product containing Flubendazole is fine.

I think they are fleas (six legs = insect) vs. mites (8 legs = arachnid). Regardless, she needs to be treated with permethrin powder. I’d be reluctant to wet her being that sick. Do they have access to a dust bath? If she’s been choosing not to bathe, she may have another illness. Will she eat egg to boost her strength? You can syringe raw egg if she won’t eat on her own. Good luck and please keep us posted.
Last edited: Dec 4, 2018

That's a great suggestion, @micstrachan. When she was outside with the others, she did dust bathe when they free-roamed (usually on weekends), though I hadn't been keeping a dust bath inside the run, since I tried to do so last spring and it got wet and buggy, and one of my other original hens ended up dying from gapeworm (confirmed by necropsy, along with failure of reproductive organ development). The last time Raven was out and about with the other girls before Saturday, she was dust-bathing in the dirt with her sisters.
For now, though, I can make a private dust bath for her in the chicken hospital. I've seen others suggest fireplace ashes as ideal for dust-bathing... Can these be used? We burn local wood and newspaper in our fireplace, starting the fires with fatwood. Would any of that create toxins that could harm her? If so, is there something else I should use to fill the dust bath? I have DE on hand, but I've heard that can cause respiratory issues for them if inhaled.

I will have my spouse pick up some permethrin this afternoon and dust her right away. I'm assuming I should treat the rest of the flock and the coop itself, per instructions in other threads/on the packaging?

And I will try the raw egg when I get home. She hasn't shown much interest in eating, but she will tolerate liquids syringed into her mouth, so I will give her raw egg tonight.

Follow-up: Should I be continuing to give her the chick boost water? (She has fresh water available 24/7 in the chicken hospital, chick boost is only syringed to her twice a day.) Will this hurt her at all? I just figured a boost of vitamins and probiotics couldn't hurt if her body is trying to fight off what these bugs are doing to her, but I don't want to load her up with more than she can handle.

OK, a quick search of my local feed/supply stores isn't returning any permethrin powder, but I DO see this option for "Martin's Pen & Poultry Chicken & Roost Insecticide Spray." It's a 0.5% permethrin spray that says it can be used in coops or directly on the birds. See the full label details here:
https://s3-us-west-1.amazonaws.com/www.agrian.com/pdfs/Martins_Pen__Poultry_Label.pdf

I'm thinking a spray that can be applied directly to Raven (for starters) might be best, since it would not require me to dunk her and worry about leaving her wet and cold? I will treat the whole coop ASAP, but first want to get these creatures to stop sucking on my baby!

Eager to hear your thoughts @micstrachan @silkiemother @Shadrach - thank you!

Another update: I am all-but-convinced these little jerks are chicken lice, rather than mites or fleas... some genus of chicken body louse (A or B below). See image below with the bug I found on Raven (far left) alongside these images from Amy Murillo at UC Riverside at this helpful page... This makes sense, too, given that the birds are all molting, so there are a lot of dropped feathers and flaky skin circulating in the coop and run. 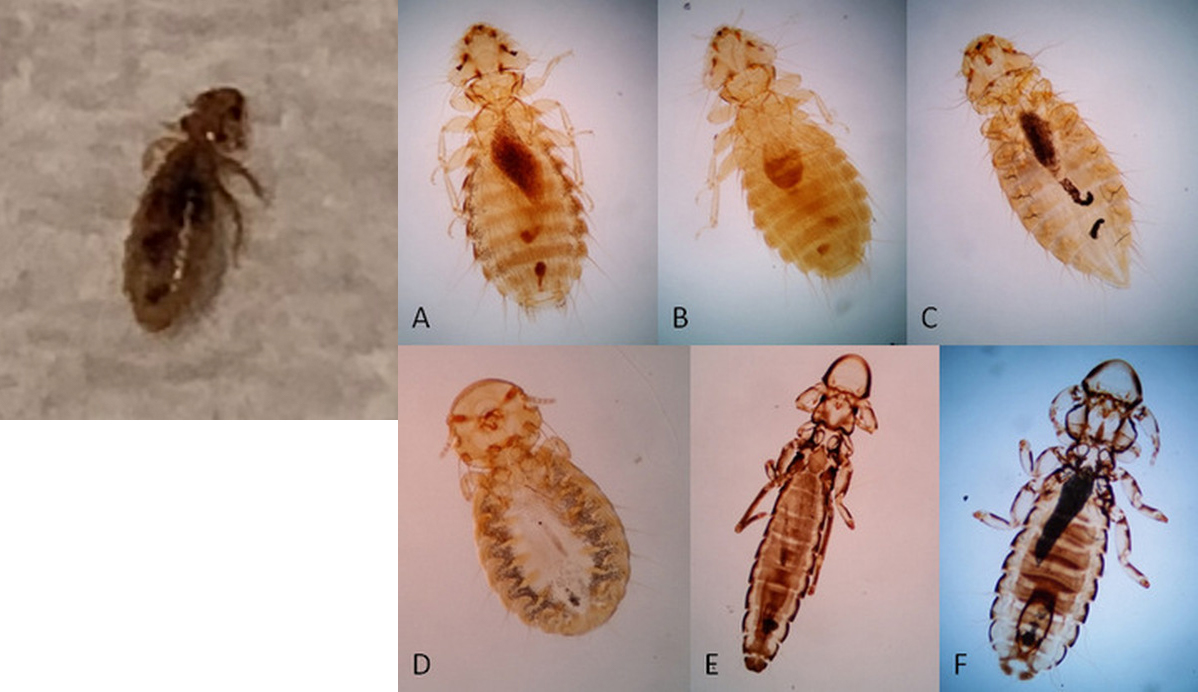 I understand that the treatment will be the same, regardless. Just hoping we can kill these jerks in enough time to help Raven get her strength back and pull through.
Last edited: Dec 4, 2018