I'm not sure why he's limping so bad. A few months ago, I give him a little toss when I was holding him to watch him flap down, and he had a little bit of a rough landing, but it wasn't that bad. He had a small limp for a day or so after that, but was fine for a couple months. Now the past week or so, he's been limping really bad. His knee joint is really swollen. He stays off it as much as possible. I feel terrible because I feel like it was my fault, even though that was about 3 months ago, but still. His leg is also considerably warmer than the other. Should I ice it or something? It isn't squishy, but kind of hard and swollen.

Does anyone know why?

Here's a picture and video of him walking.


See how his left leg is swollen at the knee joint? 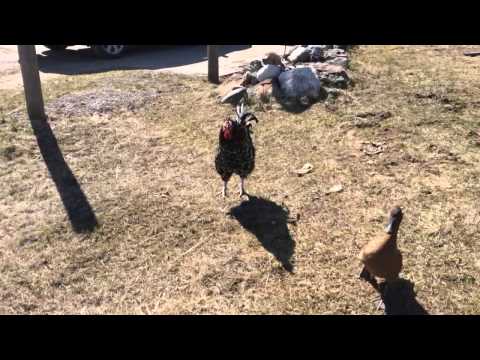 Anyone have any clues?

Should I give him a little asprin or ibuprofen to help with the swelling? He tried to stay off of it as much as possible, and scratching and roosting seem to be quite painful for him. He flinches when I move his leg.

No help yet. Mine is also hopping quite a bit. Would love to hear from someone soon! Please?

I will try that. Thank you.

Should I try messaging it or do you think that will hurt him worse?