The thread name is an inside joke between me and my dad. We've probably since upgraded from "minimum effort" to "I'm trying my best", but that isn't as funny to me.

Just made the thread to chronicle the way I'm effectively starting my flock over - with chickens, this time!

I used to only keep ducks. Then we introduced two geese. Unfortunately we had to move cross-country and could only take one duck with us. Two birds had to be euthanized for reasons I won't get into here, one of our geese and one of the ducks. The other goose got eaten. I considered it an honoring of her, she was a very good goose, and effectively served as a nanny or surrogate mother for the batch of ducklings we raised while she was alive. She was very tasty. RIP Christmas the Goose.

The duck that we decided to let travel with us was my Jumbo Pekin hen, Mymble, named after the character from Moomin. She was the first one of the three young ducks we had to start laying, and her personality was just wonderful, I couldn't let her go. We took her to the vet, got papers and everything so that she could travel. Then when we got here, I got her a friend! I was told she was a young duck, but I got there and she was actually a drake. No matter. I still love him, he's very sweet and shy and is getting used to trusting dogs again.

So then we had Mymble and her boyfriend, at the new house. Stay with me here, I swear the backstory is almost over. Promise.

I ordered two batches of live, day-old baby birds; one batch of 10 ducklings, and one batch of 15 chicks. Well, it didn't quite work out that way. An extra bird got shipped with the ducklings! Awesome. Her name is Freebird, and she has a funny looking beak, but I still love her. Within the first week, we lost four chicks to the effects of what I assumed to be dehydration during shipping. Not awesome. So now we have 11 of each. Honestly a fine number, I think.

At two weeks old, they outgrew the biggest box we could find for their brooder. By outgrew, I mean trying to perch on the sides of the box. I don't have a lot of money to spend on things they won't be using forever, and I was already several hundred dollars in with birds and brooder boxes and feed and such things, so building/buying another brooder setup really wasn't an option. Instead, I repurposed the shed/carport thing that the previous homeowners had kept their horses in as a chicken house! Cleaned things up a bit, levelled the dirt as best I could, and my dad and I made a roost for the chicks. Ended up running an extension cord out there and hanging up one heat lamp on each end of the roost for supplemental heat since we're coming into winter. Honestly I was a little concerned at first, but they're doing just fine! They seem to enjoy it, and temperatures are mild in the 60-70F range right now so I'm not too worried.

So, that's the end of the backstory. I think. Feel free to ask questions if you have them. Also, sorry I made you read so much. Have a chicken 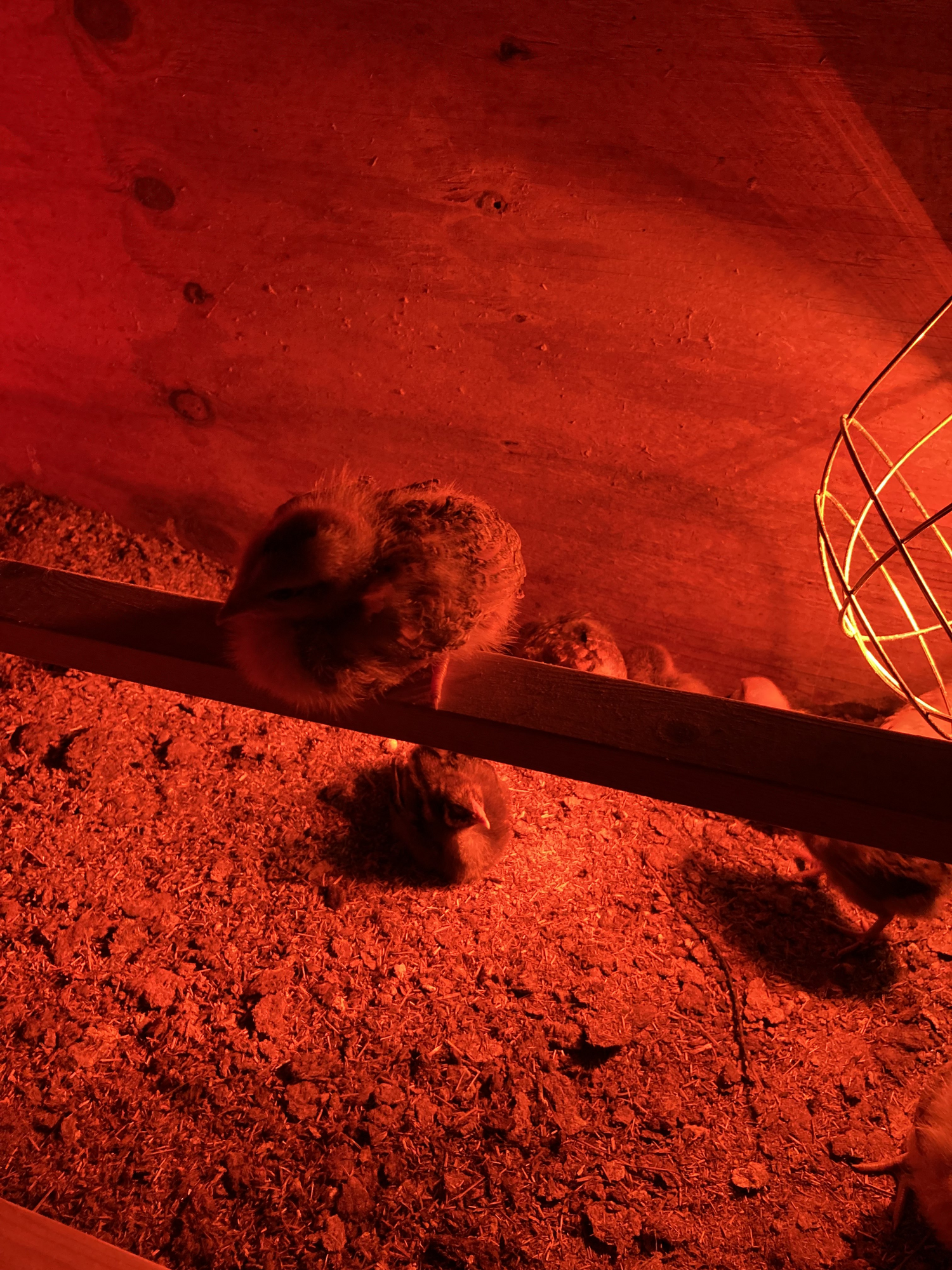 What breeds did you get?

I got the "Hatchery Choice Egg Layers" from Hoover's with the chicks, and just plain old mixed ducklings from Metzer. I made a thread asking for help with breed guesses, I need to update it with new pictures since they're starting to properly feather out. I was going to do it a good bit ago but I'm focusing on school and keep forgetting

With the ducks, I got a breed sheet; I have two Welsh Harlequin boys, three Blue Swedish girls, three Khaki Campbell girls, and three Rouen girls. Plus the two pekins, of course.

Current guesses with the chicks are three Buff Orpingtons, two Golden Laced Wyandottes, and 6 EEs. But of course, it's really anybody's guess at this point. I don't really care what breeds they are if I'm being honest, but they're all very pretty

updated photos of the babies

They are adorable. I wish I could have babies again. I am at my limit for now. Enjoy those babies.

Yeah, my minimum effort includes getting up at 5 am, putting on the coffee, feed myself then feed everybody.

I get up at 11. I go outside check everything top off food and water. Gather eggs three times between 11 am - 4pm. That is a normal day. I do extras from time to time.

I check on mine about three times a day, once at about 6:30 before i get on the bus, again at 4:00 or so after i get home and for the last time at 8:00 before i head in for the night. I refill food for the babies whenever they need it, and I'll feed the adults in the morning and at night. In the seasons we get eggs I'd do an egg check in the later part of the morning or whenever I get home from school, but Mymble isn't laying right now.

Unrelated, but I was sitting down with the chicks and one of the Wyandottes started pecking at my butt, so I grabbed them (gently) and held them up to my face. Not quite sure how to read chicken facial expressions, but that looked like one chicken who knew what they were doing alright. They understood their crimes. Both the Wyandottes are very mischievous so far- I'm hoping they grow out of it

Just refilled the pools + the waterer for the babes. Also just witnessed the first successful mating between Mymble and her boy. He looked so confused- he got on backwards at first, with his butt at her head, but she showed him the right way lol. He also only did it after express consent. What a gentleman. 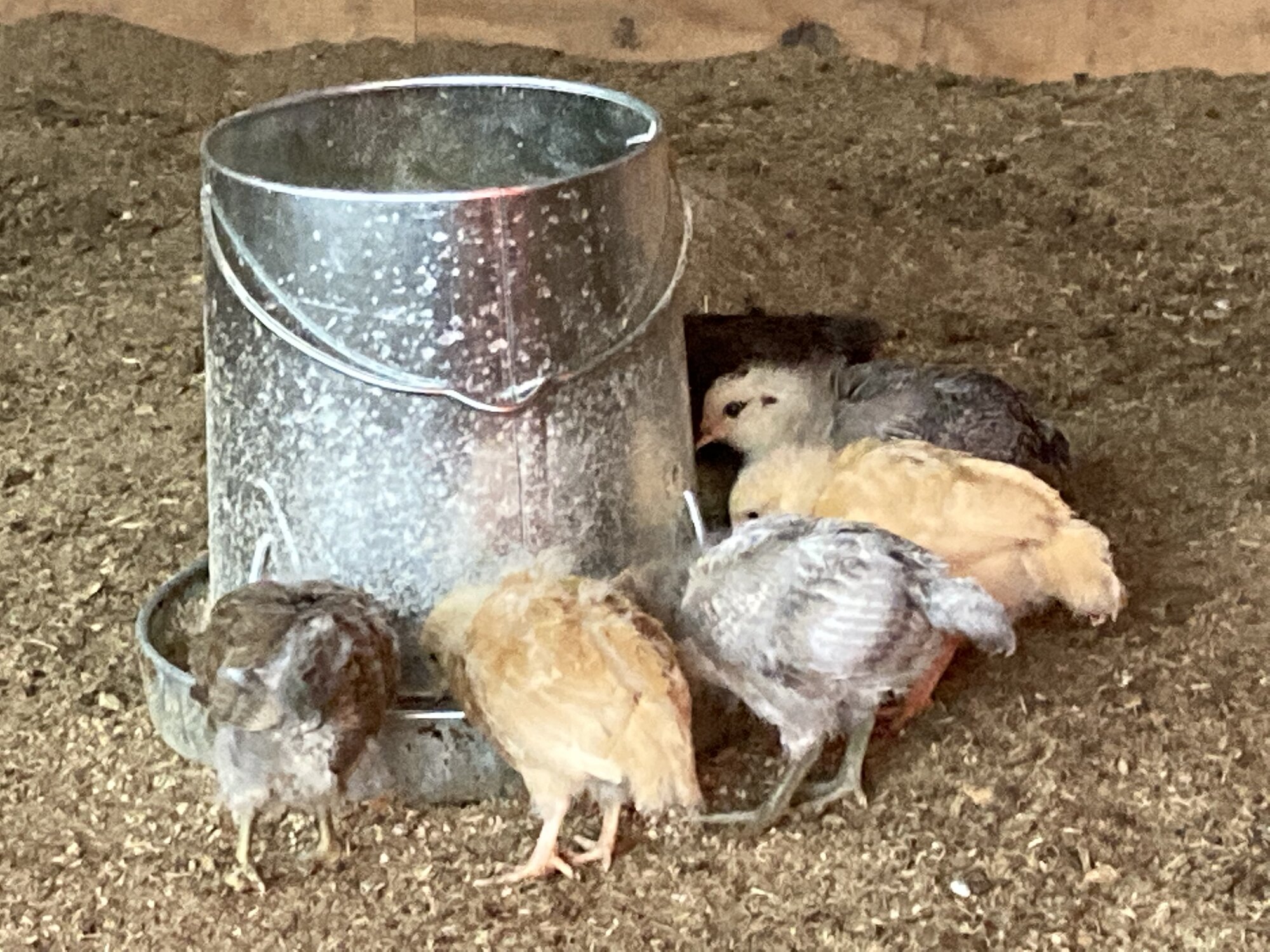 I call this one… “Banquet Attendees.”