Hello I was wondering what would happen if I mix my buff rooster with my white hen ....
would I get solid color silkies ?
What color chicks do you think would hatch?

Welcome to the forum, glad you joined.

Unfortunately the only way to find out is to try it. You are working with two colors that can be challenging to predict.

There are different ways genetically to make buff so these genes can have different effects. For example, if you cross Buff with black you can get solid black chicks, but when they feather out it's not unusual to have mostly black chicks with some yellow feathers. A few years back someone posted a photo where they got orange instead of yellow. Buff can have strange effects on other colors too. So buff is sort of a wild card.

Recessive white turns everything white whether it started black, red, or anything else so you don't know what can be hiding under a recessive white bird. Could be any color or any pattern. But since it is a recessive gene you need both of those genes at that gene pair for it to have an effect. In your cross recessive white genes pairing up so is not likely to happen so you could get anything from solid black, red, blue, or buff chicks to these colors with many possible patterns. It's possible you could even get white.

There is another challenge to making these predictions (I know, what have I predicted other than "I don't know"). It's quite possible your birds are not pure for those colors. What "pure" means is that both genes at the critical gene pairs are the same. Different recessive genes may be hiding under dominant genes. When that happens you never know which of those genes will get passed down. Sometimes it will be the dominant and sometimes the recessive. Depending on what the other parent passes down at that gene pair can give you some really different looks.

There are other factors at work too but this is confusing enough.

Probably the most likely color you will get is white, but you may get none. Wild as it seems don't be shocked to see black chicks. Or you may see about anything else. It's like Christmas when you didn't tell everyone what to get for you, you might get some real surprises. If you try it please post photos of the chicks after they hatch and again when they feather out. We like photos.

I have buff and white silkies, and i agree with Ridgerrunner, most of the time it is a light colored buff you get or a weird white, kind of like this, this is my experience though you might get different. 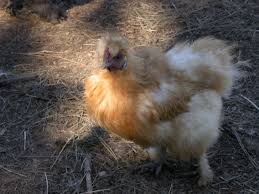 A
Bantam Cochin? What color?