I have 6 hens ( 3 brown and 3 black) and 1 polish white laced Roo all 1 3/4 or so old and 4 pullets and I live in Wisconsin. In August I broke my leg and had other people helping me with my flock until mid to end of October.

Some history and info, 7 of the 11 chickens live in a coop that is 8x8 sand rather than wood shavings bottom on stilts 4 ft high (below coop is 8x8 with oyster shells, more water and food and a flock block). The top part has 5 nest boxes and pvc water piping mounted to wall for winter to keep water from freezing by way of circulation pump and birdbath heater. 1 roost 8 ft long. Outside they access the run from the bottom part. Run is large L shape I would say one part is 30 x 15 and the rest is 12 x 30. They are allowed to free range a fenced in acre daily. Have to let them out at 12 or we end up hunting for eggs. Feeding flock raiser crumbles mixed with layer crumbles. Give the oatmeal sometimes, cabbage, pumpkins and BOSS.

All were doing great until late September, when I noticed a lot of the Roos feathers on the floor of the coop in the morning and he started to lose his tail feathers. Chalked it up to molting. Then 2 of my light brown hens were missing neck feathers just under the beak and down. They were bald and the spot was getting larger. Also had small quarter spots on the top of the wings. Molting and Roo treading I thought?

Then October came and mid month all of my hens were losing more feathers and had had small front neck feathers missing now ( just small quarter spots) I started using blu cote, pine tar ( not good on the Roo made it worse), pick no more, and finally separated the Roo when I went out into the coop and he was bleeding everywhere and was still dripping off his tail area. Did emergency stop bleed and put him in a dog crate in the garage. Then two days later gave him a bath to get the matted feathers from the pine tar that were left ( used hand orange cleaner) and clean up the area. At that point I stated to fear the dreaded feather picking has been going on. Mostly in the AM and evening roost.

I have a portable greenhouse we use for our broilers so I separated 3 hens (Queen ( dark brown) and 2 black ones ( one is just huge) after watching them be kinda bullies. I also put 1 light brown one in a dog crate due to unwellness and started getting isolated from flock. At the point we’re she was looking good I noticed she had Bumblefoot so that is getting addressed.

So now I have 3 in the greenhouse, 2 in dog crates (in the garage) and 2 in the big coop. So after a week they were all doing great in there little areas. I was not, it is starting to freeze and this was to be temporary. The Roo was growing feathers back in the tail area and not happy about the crate. Added him back to the 2 in the coop and all was great the first day, still using pickno more and blucote. Then I decided to sit and watch them, I witnessed the light brown literally pick a tail feather and rip it out. The black was also picking the Roos tail feather while perched but not the light browns neck that was growing pin feathers back. Omg!! So Roo ended up back in crate.

Now it’s November 9th, the 3 in the greenhouse we’re doing ok but a lot of black feathers everywhere in the morning, molting?. Seemed everyone was growing feathers back by the pin feathers except the light brown (bumble) in the garage, front neck is still bare. I put all 5 of the hens back together 1 at a time, except Bumble and Roo. Was going good until I went out today and the light brown one had blood on top of the wing where I am assuming one of them pulled out the blood feather that was growing back. I quick cleaned it, put iodine on it and spayed with blue cote and placed her back in. I noticed the large black one pecking the heck out of her and not allowing her to eat at the feeder, go outside to the run, get on the roost at evening time, or flock block. Queen was just inspecting lights injured wing now and then. Pecking occasionally but didn’t like the pick no more.

I finally resorted to peepers yesterday as a last resort. I am ready to cull a few. I am so stressed about it. Peepers were hard to install both mentally and physically. I don’t want to injure the birds or cause infection in there nares. I actually started crying after putting 2 on. I don’t know if they are hurting them or not. We did put them on 3 of the 4 in the coop to see if this will work out. Went out this morning and no new feathers laying around the coop floor. 2 of the hens were not happy with the peepers. Still scratching at them and wouldn't jump off the roost. I put them down and they started pecking food and grit. I am so stressed about this I am a basket case and second guess everything.

I need to get the 4 pullets that have been quarantined for 3 weeks in the coop in a couple weeks but need this picking under control.

Any advice would be great. I am not as experienced as some of you out there.
Last edited: Nov 11, 2018

Feather picking is a common and frustrating problem in a lot of flocks. You are not alone. It's also one of the most difficult issues to resolve. Several years ago, I thought I had a solution. https://www.backyardchickens.com/th...cure-for-feather-picking.697052/#post-9455600

Turned out there was no easy solution. Hundreds of replies to my thread turned up no lasting solutions, either. Over six years later, I still have feather pickers that challenge me to come up with solutions.

First, the only way to even begin to get a handle on the problem is to stake yourself out for stretches of time and observe the aggressors, identify each one, then put the peepers on them. (No, they don't hurt or harm the chickens who wear them.)

Peepers do not stop all feather snatchers. I have one hen, going on eight years old, who has learned to liberate feathers while wearing the peepers. I have a coop section opening onto a separate run where she lives apart from the flock. She had a similarly stubborn picker as a mate/friend up until a few weeks ago when she was killed by a bobcat.

So that enabled me to install a new feather-picking friend in her living area. This hen had peepers but I saw she was not able to breathe normally while wearing them. Now she and the isolated picker are new best friends, and neither seems to prey on the other's feathers.

Before I could breathe a big sigh of relief, I observed a new picker-plucker in the main flock. She joins another hen in wearing peepers. For the time being, having learned I can't enjoy the luxury of complacency, the two in the main flock who wear peepers are no longer plucking their mates.

It's an exhausting dilemma. So far, pinless peepers have been the best solution, and isolation is the next best. 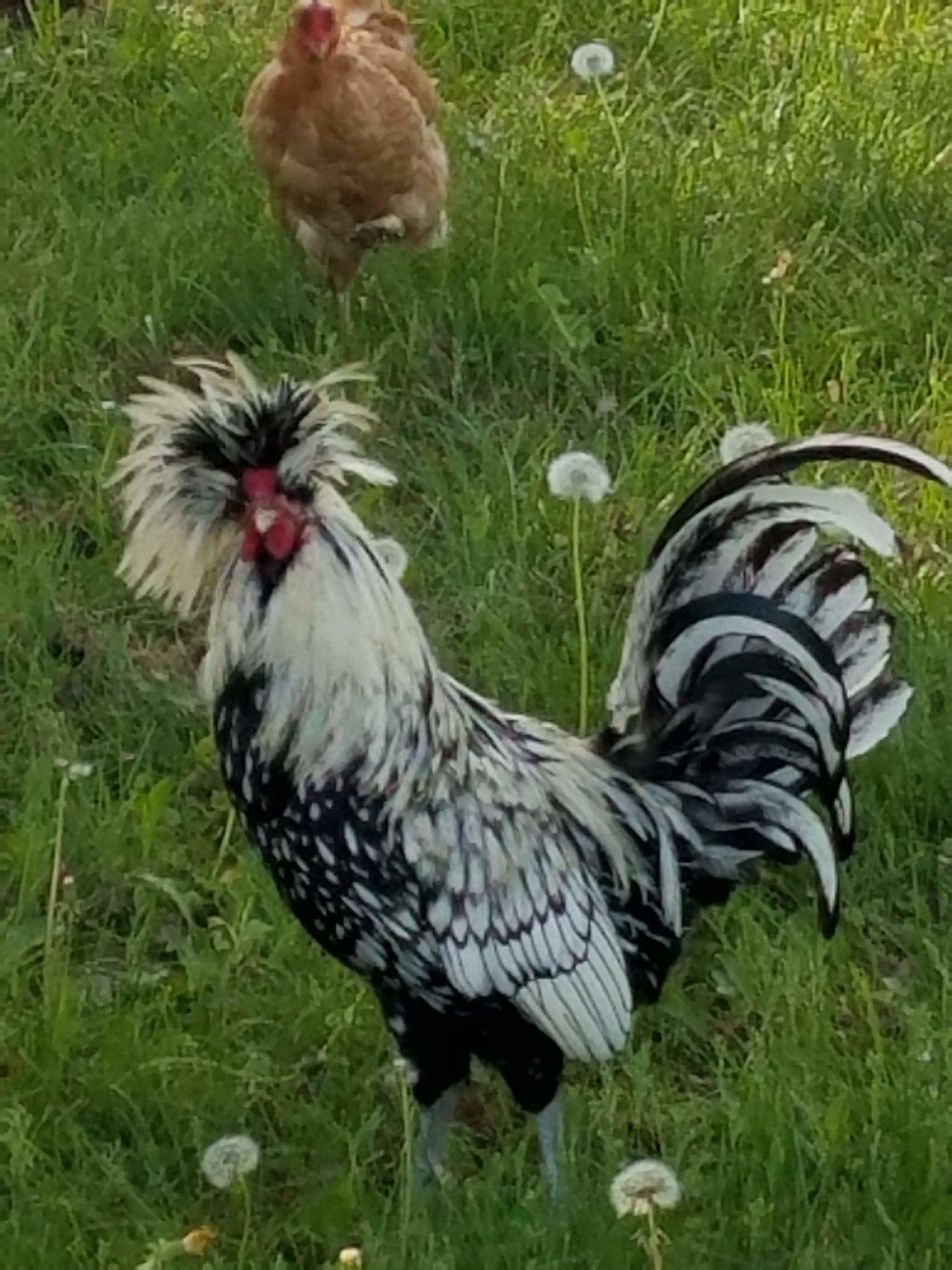 Thank you for your reply! So sorry for your chicken loss from the bobcat. You give both great relief and reality.

You help me feel much better about the peepers. I do have 1 that seems like yours with the breathing however I don't have many other options right now.

I wish i could speak chicken to understand or figure out the issue. I have spent many of hours just observing them, with no prevail, only guessing.

I don't have a seperate place to keep the pickers permanently.... seperation did work great but its the beginning of winter right now and not feasible. The greenhouse is for the spring broilers and the pullets have a portable fence that needs to come down as soon as i integrate them with the snow we are getting.

Any advice on when I should try to put Roo back in? I tried once before the peepers and he was bleeding within a day, traumatic and disheartening for me. The second pic of him was before I put him back in. All those quills were gone. Had to start all over. And rooster tail feather take a while. Seems like an inch a week of pin needles. But he was great with them and us. I feel like he is in prison for good behavior. Poor guy has been in the crate for 3 weeks. But the coop had dangerous beaks learking around.

The bad news! Unfortunately we had to cull 3 of our 7 chicken flock for picking and not having any room to keep them in a separate area for the winter.

To try and avoid it I placed each 1 back in the flock on separate occasions and watched them closely. Within 15 min each time they started plucking or picking other chickens feathers. I was so sad because I desperately wanted to keep my entire flock but nothing worked. I dewormed, tried Blu-Kote, tar, they had plenty of space.

The good news! Mr Chicken the rooster is growing back his tail feathers as is a few others on that were bald. Less feathers in the coop every day is such a relief.

Sorry I can not figure out how to add a photo to my previous post.

Here is the updated photo of my polish rooster recovering from the feather pickers. He has a ways to go but more and more feathers every day. 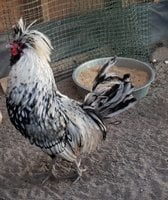