Last week, to our surprise, a beautiful chicken just showed up in our backyard. We share a continuous hill with our neighbors, so when we'd go out to look at her, she'd just run in the brush in the neighbor's yard. After a week of spotting her, we finally caught her with the help of a neighbor, using a pen with a door that we swung shut with a string. We loved watching her roam free, but there are so many coyotes and hawks, we just felt we should catch her. That first day, she was agitated and wouldn't even eat in our presence. We've learned that she is a silver laced Polish, and have been told that she looks like a juvenile. Though we have posted on neighborhood forums and put up signs, no one claimed her (although many said they'd take her). We decided to keep her because my daughter has long wanted to raise chickens. We will be getting a coop this weekend, but right now she is in a covered pen, approximately 3x3 or 4x4. We've been told to handle her as much as possible, and she has calmed to the point that she will eat a berry from our fingers. So we decided to try and hold her today. I thought I'd hold her and have someone else feed her mealworms and then after a few minutes let someone else hold her. We were instructed on how to hold her as to make her the most calm. Unfortunately, when we took the lid off the pen, she flew out (wings to the face are strong!) and hid in our bushes, flew against our house and then ran into our house. I finally caught her in a towel and sat with her against my body for about 15 minutes, but she would not eat and it was a very stressful experience. I didn't end up passing her to my daughters because we feared losing her. So we managed to put her back into the pen, and were relieved at that point. Is it realistic that we will ever get her to the point that she will be as docile of a pet as Silver Polish are described to be? I'm nervous about trying again tomorrw and then also about getting her into her coop when we do get it. Anyone have experience with getting a chicken to gradually acclimate? If so, about how long does it take? Any recommendations. We don't know how long she had been wandering the neighborhood, but it had been at least a week between the first time we saw her til the time we caught her. Any recommendations are appreciated!

I'd give her a little more time to settle down, before trying to handle her. Maybe start with hand feeding her for a bit longer. Then move to one person holding her (but not passing her around to others).
N

Thank you Rojo Marz for your helpful guidance. How long do you suggest we wait?

@New to Chicken I don't know that there is a real time line. Take the cue from her. If the hand feeding is going well and she is coming to you for treats, maybe sneak in a pet/stroke or two on her body while she's nibbling. From there, you can move to picking her up (football style) and holding her for only a couple minutes. Continue to gradually increase the hold time.

Another trick is to sit in the coop run and read or do something quiet...you just want her to get accustomed to you. At this point, you are not trying to touch/hold her. Sounds like your current pen doesn't allow for that and am not sure if your upcoming coop and run will.

Be aware though, not all chickens want or enjoy being handled. Thus, you may not be able to completely turn her into a lap chicken. Are you planning on getting her some friends. Chickens are social/flock animals and prefer to have other chickens around.

What a great story!
She will need time.
Don't rush her to trust you. Sit next to her, talk to her, etc. She will trust you but it will take time.

Awww, I love the fluffy headed breeds, I would have passed out from excitement if I had found a random polish pullet! Polishes, while "friendly" are more in the range of "not aggressive" for most of them. They tend to be programmed to be skittish because once they feather out they can't see much. If I were you I would try a few different treats, mealworms, pomegranate seeds, bits of torn up kale, strings of shredded cheese. I like to find my girl's Achilles heel so to speak, the thing they like the very most in the world then I use that treat. Give her a few chances at each treat before deciding she doesn't like it before moving to the next thing. One thing polish are is really, really cautious. Make sure to make a habit of talking to her, that makes a huge difference once she grows in her crest and can't see well, she will learn your voice is safe and run for you. My Buff laced comes at a full run when she hears me talking, she likes when she hears me start to set my chair up and waits until she hears me pat my lap so she can hop on. I plan on trimming her crest once she is mature, but until she grows her feathers in and they are free of blood at the base I won't trim her. Take a lot of time, don't rush. She is scared, chickens in general are terrified if they don't have a flock, she is on high alert right now. If you sit with her in the pen and just stay with her, sometimes I will just tap the ground and talk quietly to my chicks while we sit outside, it sounds like a mama hen grazing and talking to her babies quietly.
N

Thank you for all the advice! You are correct...I don't think I could fit in there with her

. We will have to give that a try. I really appreciate the different suggestions re. treats. She does seem to like most of those although we haven't tried the cheese so that will be next!

I'm glad you found a few things in there helpful. No worries if you can't fit in there, just hearing and seeing she isn't alone will probably be good for her. One thing to remember is to keep her treats under 10% of her total daily intake. Pictures 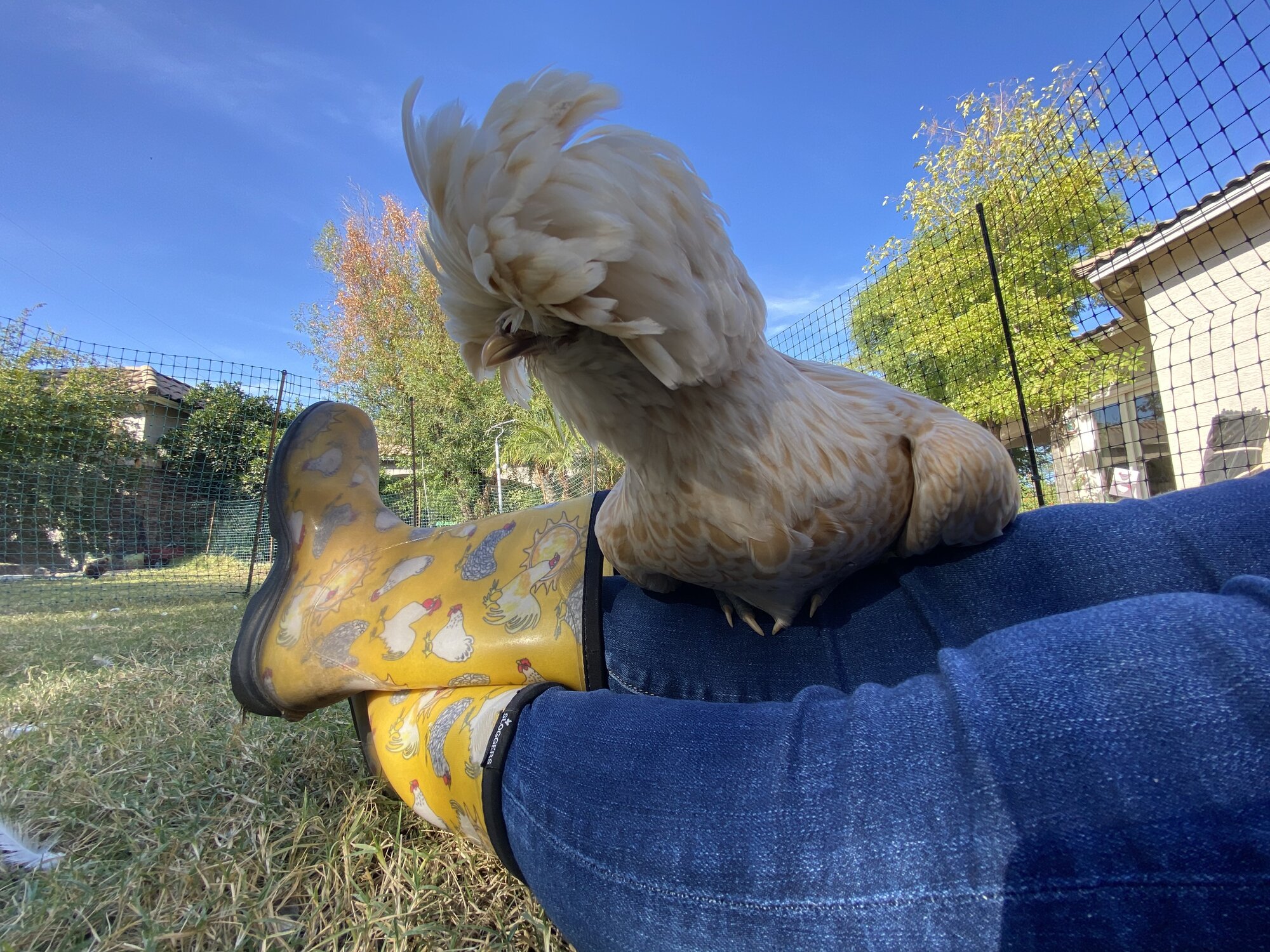 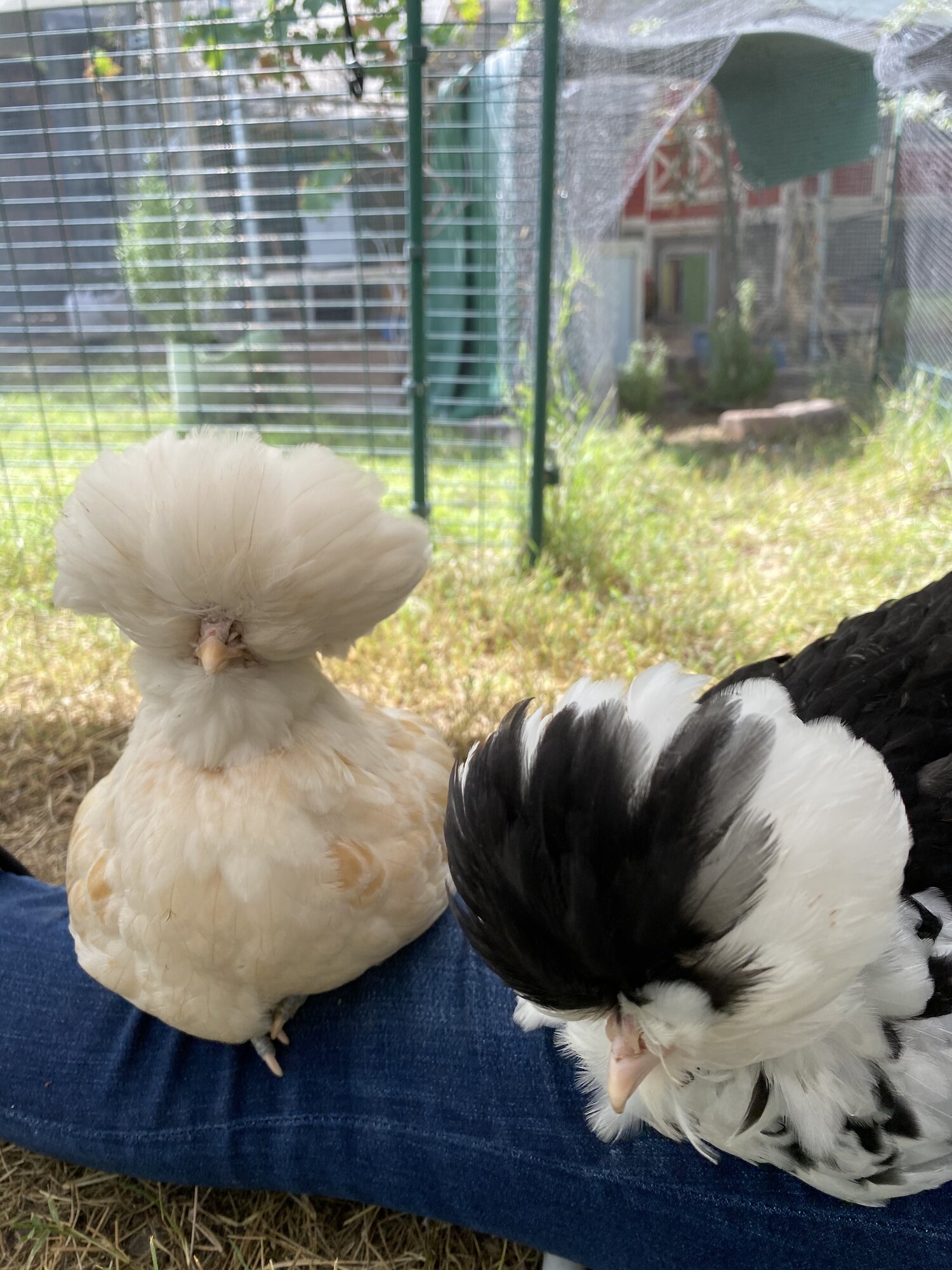 Aww! I'm glad you rescued her.

Try putting her favourite food on your lap until she comes on by choice.
She must be really pretty.

Have you considered getting her a friend? She will need another chicken otherwise she may be lonely.... what is your setup right now?

Don't feed her too many 'treats'.
Are you sure she's a female?
Post some pics?


RojoMarz said:
Be aware though, not all chickens want or enjoy being handled. Thus, you may not be able to completely turn her into a lap chicken. Are you planning on getting her some friends. Chickens are social/flock animals and prefer to have other chickens around.
Click to expand...