One hen seemed to have damaged feathers, of which we suspected mites but, I’m not really thinking mites since she seemed to be the only one with the problem, and since she was with other chickens and no grass at her old home, I’m assuming it is a combination between molting and getting picked on. I didn’t see any scarring, clusters of eggs, or evidence of scaly leg mites, so we decided not to treat for mites, but we did bathe her and her sister. Just wondered if anybody had anything to say about it. She also had runny poop for a day or so after we got her but seems much better now. If we should’ve treated, please let me know!

As for her sister, her sister has a weird eye thing. I think the third eyelid is covering the entire eye. There is no discharge or oozing from what I can tell. I have a picture but she kinda blinked during it so it’s pretty terrible. I’ll try to update with better pictures later. The other eye is perfectly fine. No discharge, no oozing, it’s clear, alert, and she seems healthy in every other way from what I can tell.
Should I rinse with saline, or just wait it out? Her previous owner said she hadn’t seen that on her before, so I’m guessing it may have happened during the ride home. 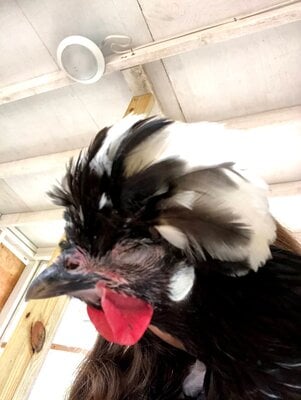 And, last but not least, the rooster. He seems very healthy but is missing some feathers on his head. He was with another rooster so I think he was getting picked on. The feather shafts are visible but broken, and the feathers are gone. Since he and the girls wanted to be near each other, I let them hang out together for a while while I was watching, and one hen started gently pecking him there. He didn’t seem to be bothered by it, but I don’t want them to hurt him. They are separated whenever I’m not watching them, but they really want to be together. 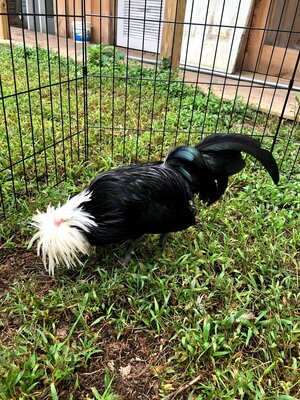 Thank you so much in advance!

All the new chickens are separated from my other chickens.

If you have BluKote you can use it. I always have veterycin on hand for injuries.

How is the hen with the eye issue?

New environments and moving to a new area can be stressful, I always have electrolytes added to the water for new members.

You can use the BluKote on him, but likely it won't deter the hens from picking at him.
I believe @Eggcessive kept crested birds at one time and may be able to give you suggestions.

If you can get some photos of the eye when it's open that would be good.

I would open the open and look around for a stuck feather or debris. Saline eye wash would be fine to use on the eye. If you notice drainage, then use some Terramycin or plain Neosporin ointment.

My 2 polish hens would have their head feathers picked out separately at least once a year by the others. Once I noticed, I would spray BluKote on the bare skin, and they would usually leave it alone until the feathers grew back. The first time it happened, the head became completely bare and the skin injured. So get the BluKote on it now, or separate to pecked one.

Another time when a young cockerel was trying to mate one polish, I found her completely scalped and injured. That time, she needed separation and some plain Neosporin ointment on the wound. Once it scabbed over, I used the Blukote, but it took about a month before I saw the new feathers coming in. Those new feathers are very attractive to the other chickens to peck out, so you must apply the BluKote every other day to keep them safe. Not everyone has had the same success with BluKote. Gentian violet which is found in some drugstores, is the blue staining ingredient in BluKote. There are some other brands such as Wound Kote, but I like BluKote since it is more blue than violet. Sorry for the long book.
You must log in or register to reply here.
Share:
Reddit Pinterest Tumblr WhatsApp Email Link