New to Turkeys - Why are poults so cute??? Also, serious questions.

DragonsNest said:
Show me the science. Every animal I have ever raised with loads of socialization has known their boundaries with humans and been respectful. Every animal I bought raised by someone else took years to become comfortable around humans. You have your experience. I have my experience. I also have not been able to find any science that imprinting causes aggression. Until I see the scientific research to prove my way wrong or your way right, I choose to believe both ways have their benefits.
Click to expand...

In that case you have been very fortunate. Animals, especially male animals that do not fear people can and do become very aggressive to the point of many, many cases of causing harm to people.

Zdonahoe said:
Here is my little turkturk, spoiled rotten.
These baby's are some of the most loveable things I've had in years.
View attachment 2661006
Click to expand...

You won't think that is very funny once that turkey becomes full size and rakes you with its claws and hits you in the head with its wings as it tries to secure a foothold on your shoulder.

I remember seeing a photo of 007 Sean working on his car with a large turkey lying at his feet- like a dog would. Made quite an impression on me.

Poults are the cutest. This is my first year raising turkeys. We got the bargain surplus heritage breed special from Cackle. We got 4 Blue Splash slate and 1 Black one. They are 4 weeks old. I'm pretty sure we have at least 3 Toms in the 5. I can't decide if the black one is a Tom, but we'll see!

Do turkeys come home at night if they roam? I'm hoping to let mine free roam in our dog yard with my chickens, but hope they come back to their shelter to roost or at least our Fort Knox run. We have raccoons, bears, fox, coyotes, stray dogs....

I finally put my poults outside yesterday. It got down in the 20's at night, but they stayed warm under their heat lamp in their shelter. They actually went in when it started getting dark and they got cold. They hadn't when I tried putting them outside a week ago. They have a section of the chicken run with an insulated house of their own.

They are loving it outside! 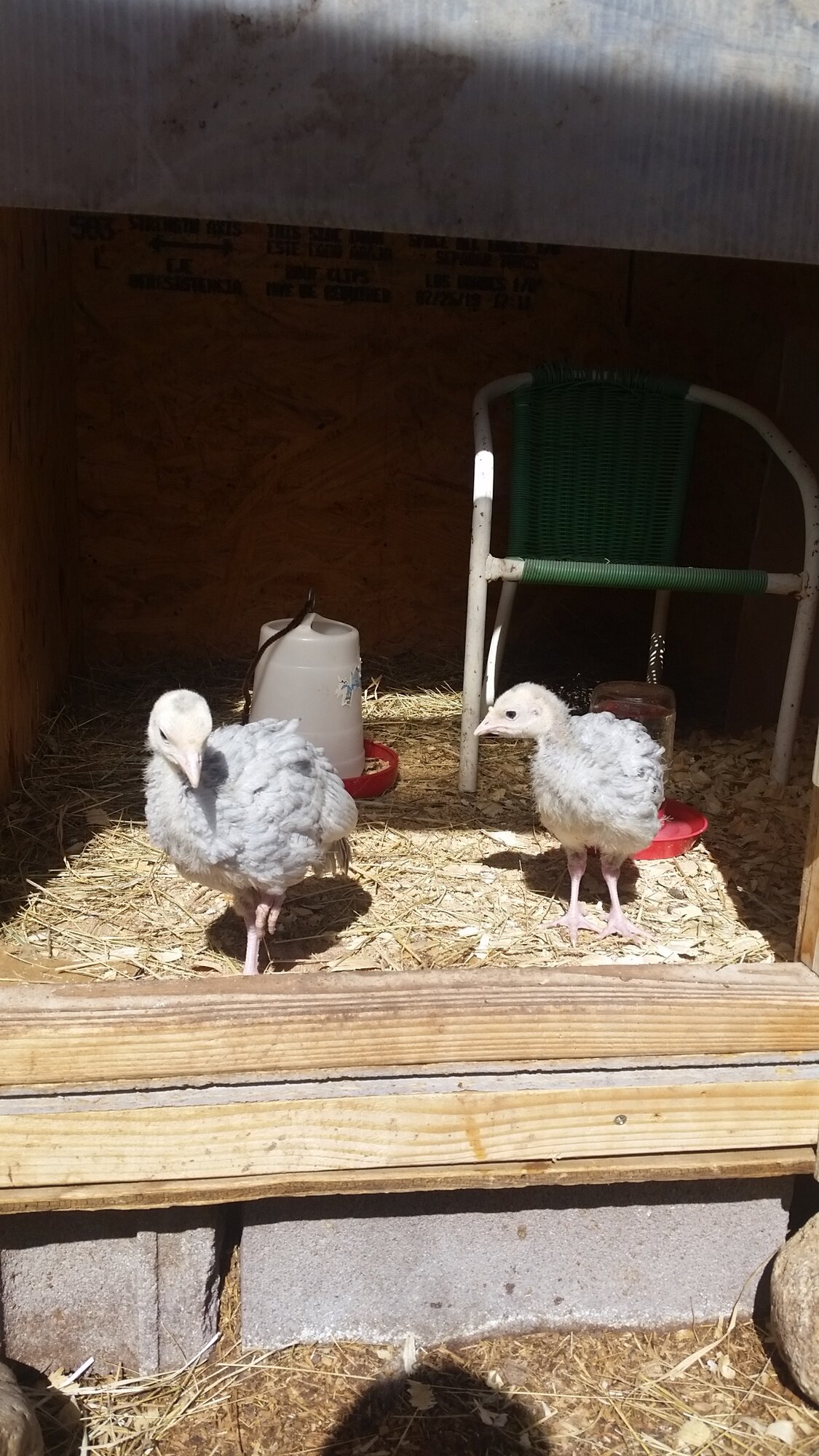 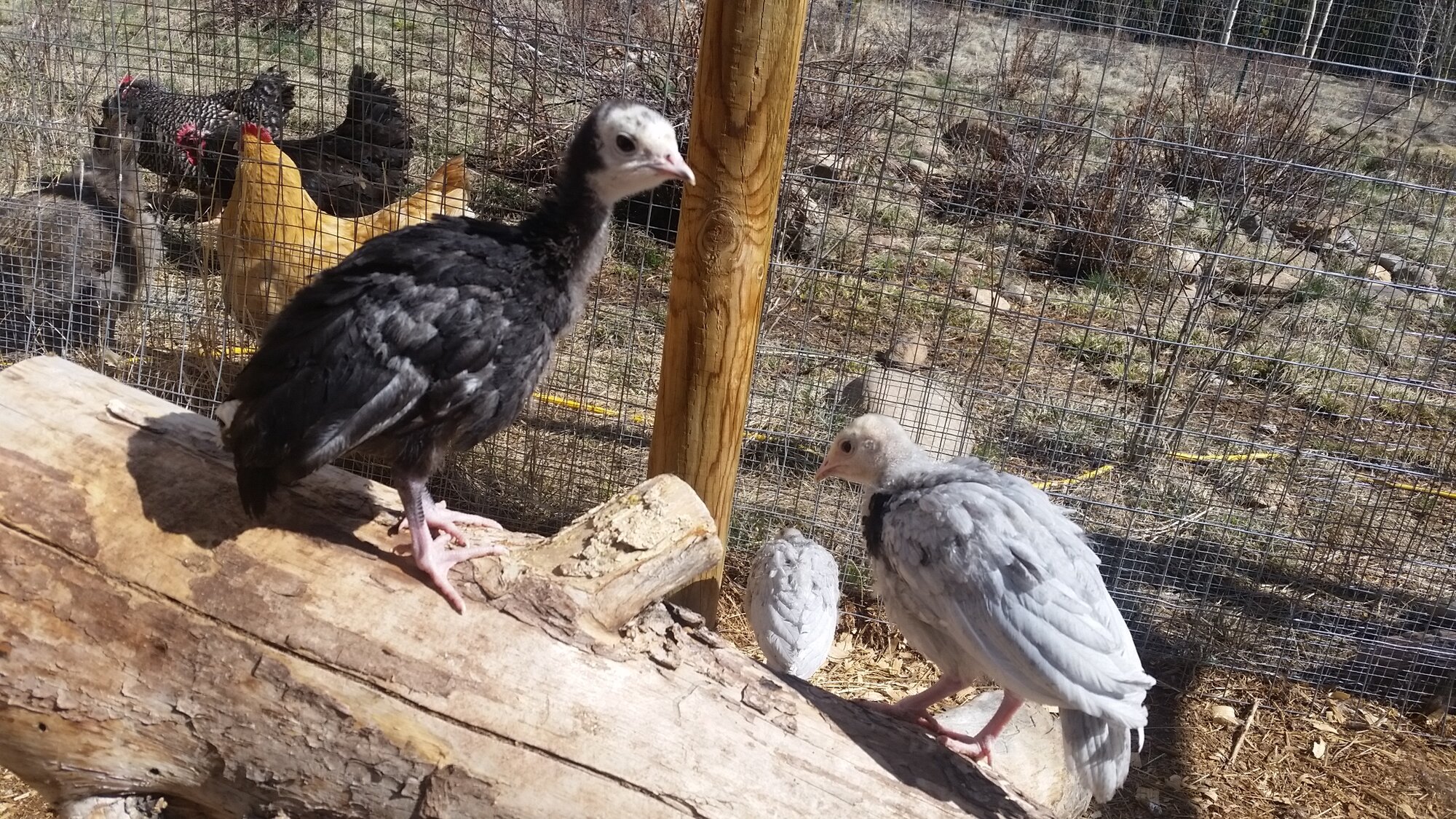 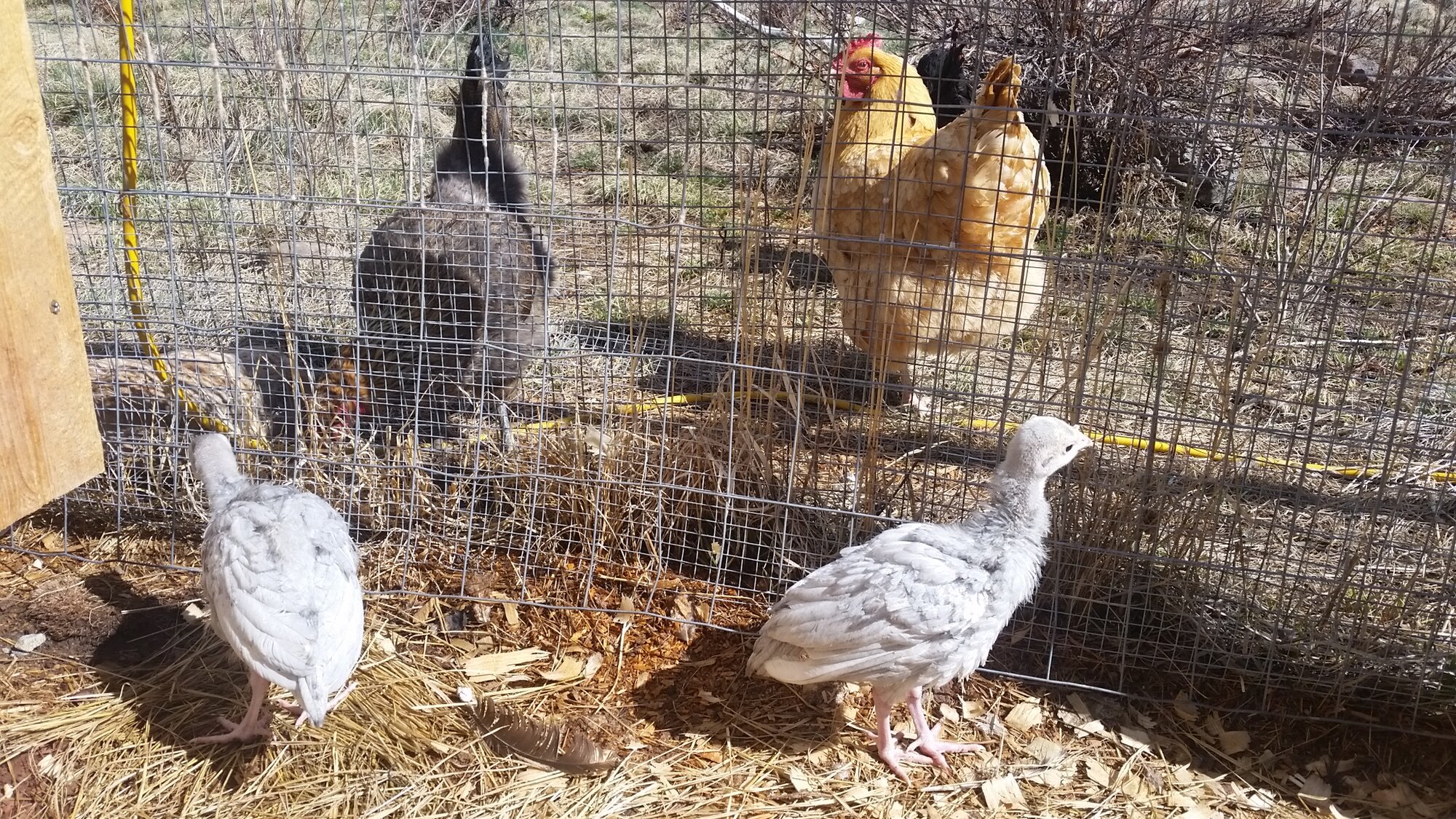 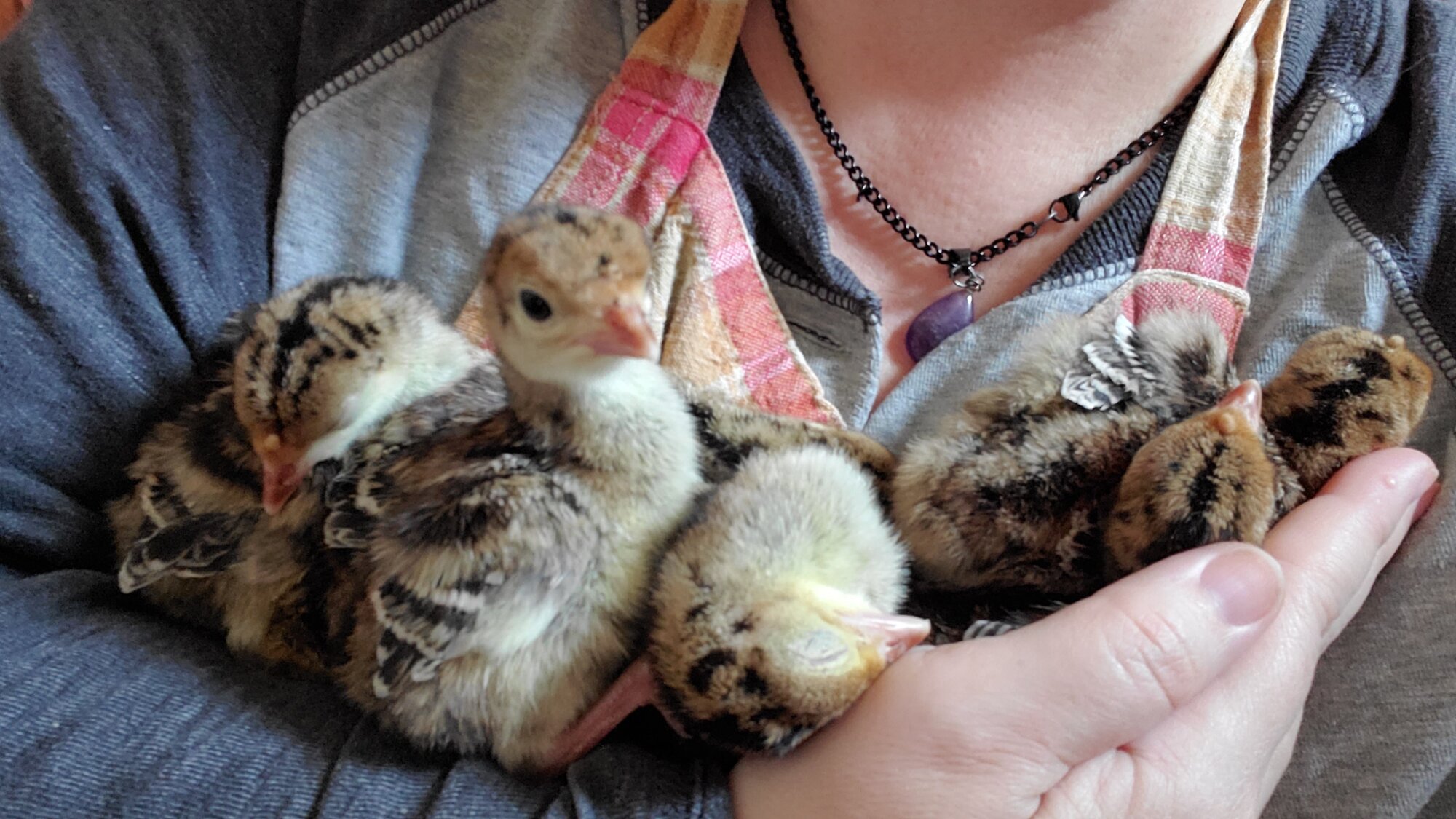 MeganFair said:
We decided to experiment with poults this year - we’ve raised ducks for three years and chickens for two. We got 15 turkeys - 6 Midget Whites, 4 Blacks, and 5 Royal Palms. I am already charmed by them, the cute little boogers, and I’m excited to have them around the yard. But I have a couple questions from more experienced keepers. I don’t know why I didn’t ask before, but I’ve done some research on requirements for brooding a such. However, I don’t think I ran across any information that answers the following questions yet.

We’re planning on butchering the birds we don‘t want to keep in October. The poults were hatched April 6th. Is this going to be too early for our particular breeds to get to a good weight or could we even slaughter earlier?

Are there any red flags we should look out for behavior wise or physically? I’d like to keep a tom and a couple hens for eggs and breeding, but we do have a policy of eating the rude. I know what to look for in chickens and ducks, so am I simply looking out for the same behaviors or is there anything particular to turkeys I need to know about?

The Whites and Royal Palms look the same right now. About what age will I be able to see enough feathering to tell them apart?

The poults seem to be very curious and willing to approach us when we check in on the brooder and allow touch as along as you move in a non-threatening manner. My experience with ducks and chickens is that usually it takes some time before they do more than cower in the corner when you get near. Will this behavior continue with encouragement, or will it fade out and they‘ll get more skittish as they get older?

I know it’s not advised to keep chickens and turkeys together, and we’ve got more than enough fencing and yard to give the birds separate areas to roam, but what about ducks? The plan is for each species to have their own coop for the nights, and let em out into the yard during the day. Would it be okay to let the ducks and turkeys roam together? We’ve never had an issue with our current males getting amorous with ladies of the other species - I’ve made sure to keep at least four to five hens per drake and we’ve almost always had at least ten hens for every rooster - but I know disease is the big issue with chickens and turkeys cohabitating. The original plan was to let em all run out together, since I thought that was okay for small backyard flocks, but I’m pretty sure we’re going to at least separate the chickens and turkeys from each other after reading through some of the threads here.

And lastly, because I can, babies.

How's your experience going with your turkeys?

I just had to post that I love my full grown turkeys. They are so funny! One of my Toms didn't like my different footwear. I have been wearing flip flops all summer. The other day I went out in the yard wearing brown leather sneakers. He attacked my shoes! Cracked me up! Lol!

I still think they are cute. Silly birds 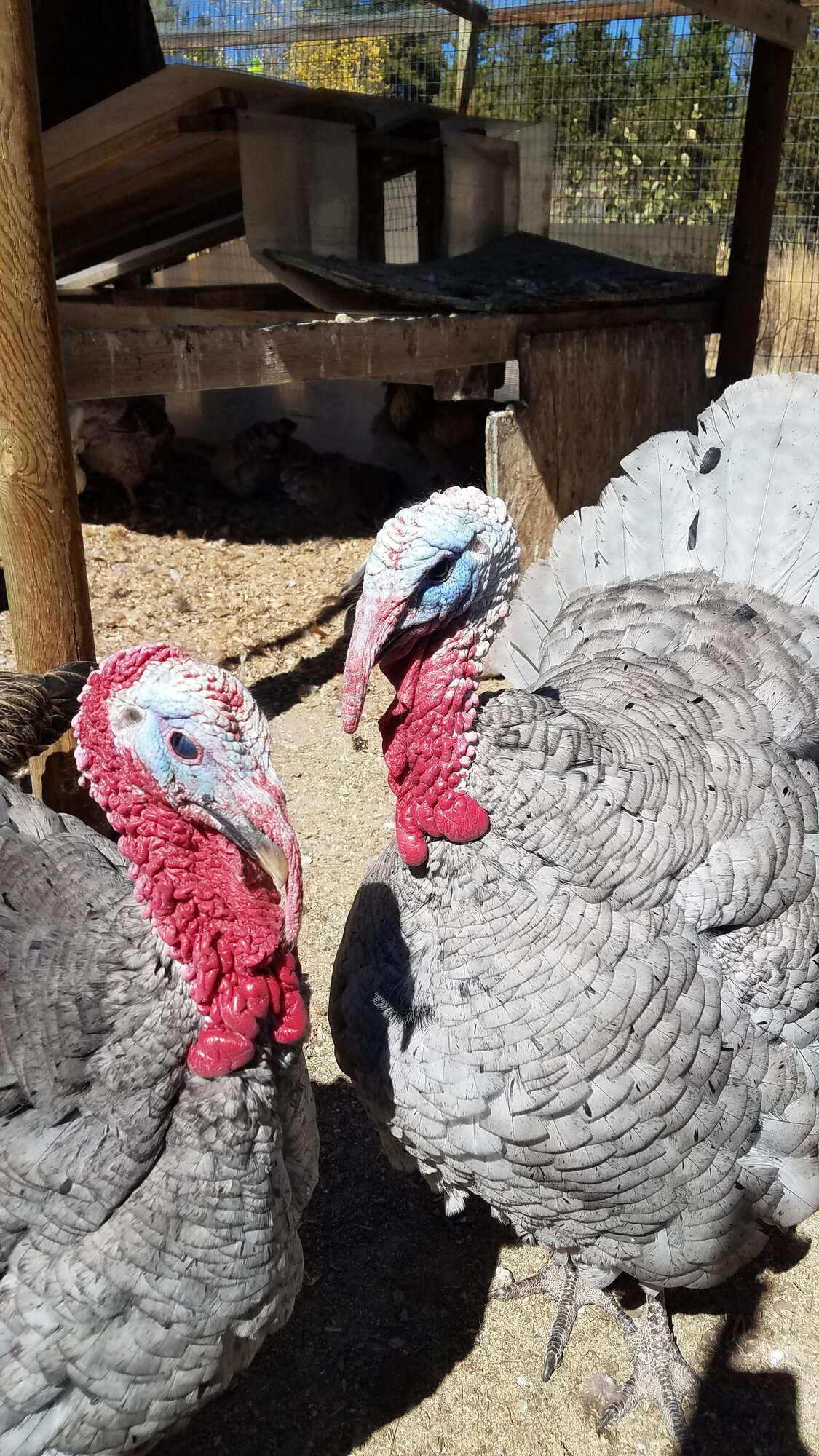