Hello Everyone,
Thought I jump into the fray instead of just observing from the sidelines. I got into this hobby after seeing chickens roam around in the yard of a house in my neighborhood. After a brief conversation with the lady about how easy or difficult it was to keep chickens, I decided to jump in with both feet. I started with 7 pullets, different breeds, from a local farm earlier this year in May. A couple of months later, lost 1 to sudden death. Then got the itch for some more. Added 5 Barnies. About 5 or 6 weeks later, lost all 5 of them to some preadator. While this upset me, it didn't dampen my itch. So found another farm & got about 9 pullets. A few weeks later, lost 2 to a predator & 1, a Speckled Sussex, just died in her sleep. The itch came back again about 5 to 6 weeks later & ended up getting 10 more. So I now have a total of about 22 chickens spread across 2 flocks. One flock has 12 chickens while the other has 10. Each flock has their own coop. While I still have the itch for more, I've managed to control it. Till springtime anyways. Apart from predation, I've not had any issues. Since I live in a semi rural area, I let my birds free range. Not sure though whether I'll continue that in the winter or not. Reason being that with less food around, predators will be more apt to attack during daytime. I'm also considering installing an electric fence. If I can find something reasonable. I'm welcome to suggestions. At the moment, I'm working on running an electric line to the pen where the two coops are connected to so that I can hook up the water warmers to. Living in CT, we will surely get a few blizzards between January and March. Not being a winter person, I would like to avoid having to schlep water twice a day. I don't even do that now. Besides that, I get bored with having to do the same chores every day. So I try & automate things if possible. This keeps the hobby enjoyable.

Please feel free to point me towards posts that you feel a newbie like me can learn from. Especially things related to winter since it's fast approaching.

Welcome! I hope you find a solution to your predator problem, lots of things people do, including only part time free range, etc. Im sure you'll find what works for you

I myself completely enclosed mine after a bobcat tried to get my hens but was unsuccessful. It's really a large area, a quarter acre so it works for me.

Welcome to BYC! Good luck with your 2 flock's!

For water try making the container black. Black will absorb more heat and it won't freeze as quickly.

Hi and welcome to BYC. These links may be interesting 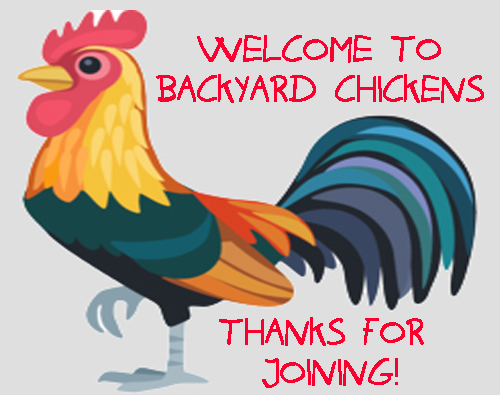 Hi, and welcome to Backyard Chickens! BYC is a very informative site providing everything there is to know about chickens!

Check out BYC's articles on just about every chicken subject! They're very simple, helpful and easy to read!
https://www.backyardchickens.com/articles/


We all really enjoy BYC!
I hope you enjoy this site as much as we do! Hope to see you around the forum!

Pork Pie has given you some great links to get started, and there are lots more in the Learning Center (under the Articles tab).

Best wishes to you!

I free range and there are predators here. Goshawk is the biggest problem.
All the chicks now are broody sat and hatched. I have four different groups each with their own coop. Each generation seems to learn better survival skills for this environment and each year the predation rate is less.