Official BYC Poll: What Kind Of Relationship Do Your Dogs & Chickens Have?

The thick end of the volunteer state.

My blue heeler normally ignores the chickens. She has killed several but normally it is an over aggressive cockerel that’s pushed the boundaries of personal space. I think 6 total in 3years. The dog is fenced in but the chickens can not resist her backyard area. Flying into the pen isn’t a death sentence but an attempted flogging is.

I wish my maniac dog liked my chickens, ducks or our kitten. I’m like a full time referee over here! We have a 2 year old boxer. He thinks everything is a toy! He has chased the ducks (thankfully they all made it in the pond before he made it to them).

We keep our chicks and obviously our kitten inside and he does okay with them. Chicks are in the safe in basement but when we hold them and carry them around he wants to sniff them so we allow it until he tries to touch it with his paw. He does okay with the kitten too for a small amount of time. He is obviously much larger so we try to keep them separated until she grows. Best way to describe Dallas (our dog) is a bull in a China shop so we try to keep anything squishable away from him. We are working on him and the kitten now. The birds and him will be our next venture. He did love the pig and play well with it. My youngest is his world! They are actually sleeping! We fell asleep watching a movie and I woke up at 1am and she’s sleeping on the floor with him haha

I have beagles. My boy dog has never bitten anything,but he plays rough, so whenever I see him go into play mode around the girls I have to tell him no. When we first got chicks my female would go into hunting mode when she‘d see them so I was worried. One day I thought she was inside so I let the girls loose into the yard. All of a sudden I heard Ruby demand barking which I thought she wanted to come outside until I walk around to the back and she‘s desperate to get inside because she’s surrounded by all the chickens. After that she hasn’t shown any interest in the girls.

Gemamma said:
I have an 8 month old great pyrenees/Anatolian shepherd/akbash pup and he LOVES his chickens and they love him. The problem is, he sometimes loves them too aggressively (poor chickens) and he wants to play with them (which leads to dead birds), so for now he stays penned during the day while they're free ranging except for training sessions and we let him out at night when they're put up for the night. We have high hopes for him, but it is definitely frustrating sometimes.
Click to expand...

If it's any consolation, our pyrenees was the same at that age. He just recently turned a corner where we can let him in with the chickens and he isn't interested in playing with them anymore.

AgnesGray said:
If it's any consolation, our pyrenees was the same at that age. He just recently turned a corner where we can let him in with the chickens and he isn't interested in playing with them anymore.
Click to expand...

Perris said:
My dog did (unsuccessfully) go for one when we first got chickens, but was trained out of it, and now ignores or avoids them, to such an extent that if they're sitting on the doorstep when we open the door to let him out, he decides he doesn't need to go out after all, or needs to go via another door

How did you train your dog out of it? My dog went for a chicken recently and now I don’t trust him! Any advice would be great!

I put him on a lead and walked him among them, giving tugs and praise as appropriate to bad and good behaviour respectively. Good luck with your dog!

Hello! Please take a look at my contest and have a chance to win a FREE BYC calendar! 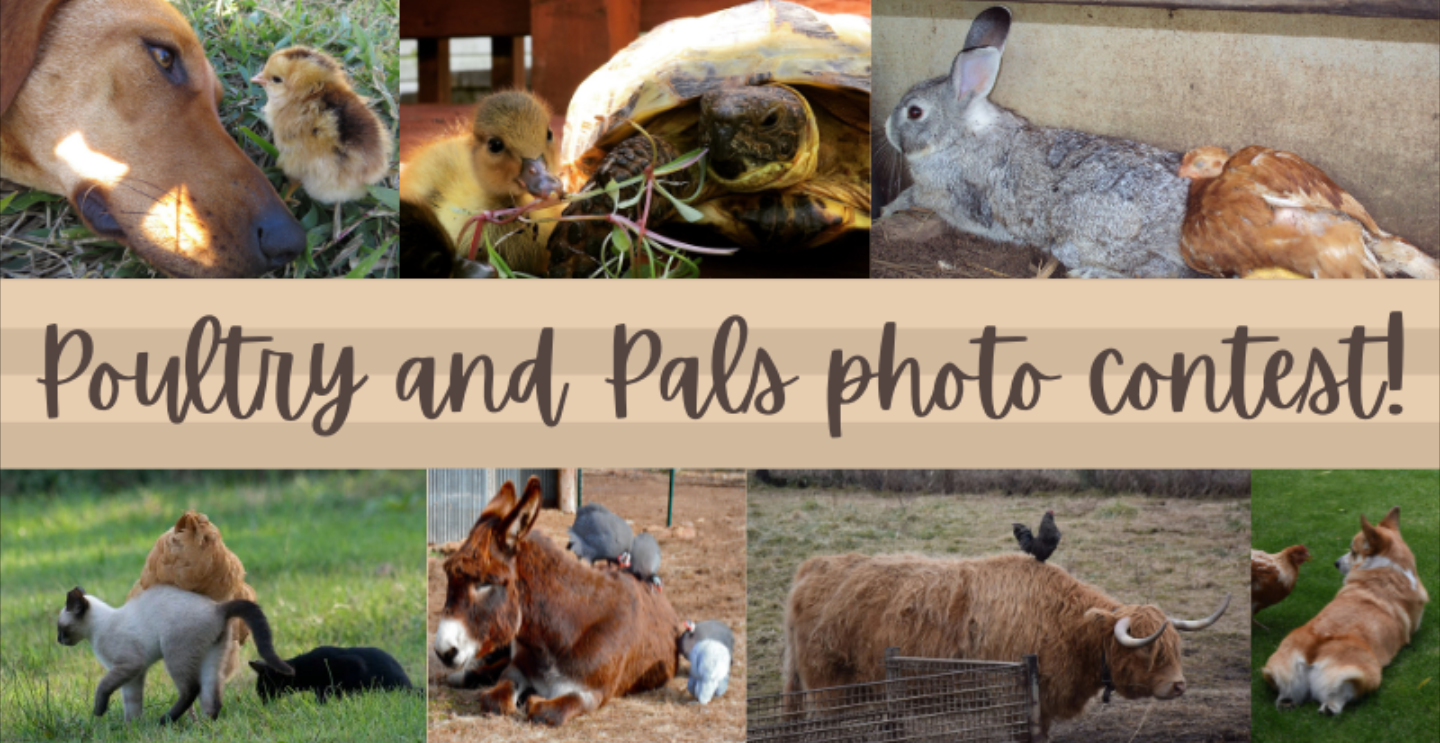 It depends on which dog... I have three Golden Retrievers, all trained gun dogs.

My oldest girl somehow figured out on her own that the Chickens were not Ducks, Pheasants or any other upland bird and therefore were not for her. I can and have used her to track down and retrieve escaped Guinea hen chicks and even though they really are as close to wild as you would want, she brings them back to me totally unharmed. It was amazing to see her track them through the woods until she found them. I have also asked her to retrieve the occasional escaped baby chick when moving from the brooder to the main coop. She waits very patiently at my side until I tell her to fetch and then she takes off. She has an incredibly soft mouth.

Dog #2 knows she is not supposed to go after chickens and she won't as long as I'm watching her. However, if she manages to find them when my back is turned all bets are off. She does not kill them, but she will pluck them and toss the feathers around. So far I have not lost a chicken to her antics, just lots of feathers. She even managed to get our Rooster who is something of a pansy. He really won't protect anything, including himself.

Dog #3 will take off after any available chicken and once she is in "hunt" mode, she can't be called off. However, if you see what she is doing and call her back to you once she has the bird, she clicks into her training, brings the chicken directly back and moves into heel position. She gives the bird up gently and the is chicken totally unharmed (but kind of pissed) However, if you miss that there is a chicken in her space and she gets it without anyone calling her back, she will absolutely kill it and eat it. As far as she is concerned she caught it and if I don't want it, it's hers.

Dogs are all different and all behave differently around birds. I would not trust any one of them until I knew what they were likely to do.

My dog is only a puppy and she *loves* running circles around the run barking at the chickens. I let her do it because 1. She uses up her energy. 2. The chickens don't seem to mind (they always chase the dog from the inside of the run). 3. It's adorable to see my little cross-beak puffing up her chest and run around chasing the dog. And 4. The dog can't get to them.

Official BYC Poll: Do Your Chickens Go Inside Their Coop When It Snows?
5 6 7

Official BYC Poll: What Is Your Least Favorite Thing About Keeping Chickens?
16 17 18

Official BYC Poll: Which Challenges Did You Face in Getting Backyard Chickens?
5 6 7