Article Reviews (2) Gallery
Leave a rating
Last spring we lived in a town that wouldn't let us put a shed on our 1 acre lot because we already had a detached garage. Chickens... forget it!

So fast forward to August of the same year and in the midst of a move to a place that suited us better, we found ourselves the proud owner of some duck hatching eggs from a new neighboring farm and 6 little chicks. and they were growing quickly! We had an old barn on our new property and a former beagle kennel, but the closer we looked, we realized that neither of these would be able to be converted in time for our little flocks to move out when they should. After much deliberation, we decided the quickest way to get something built for them that we would have room to grow with was a 10x10 shed kit from Lowes so we made a (very informal) plan and got started. 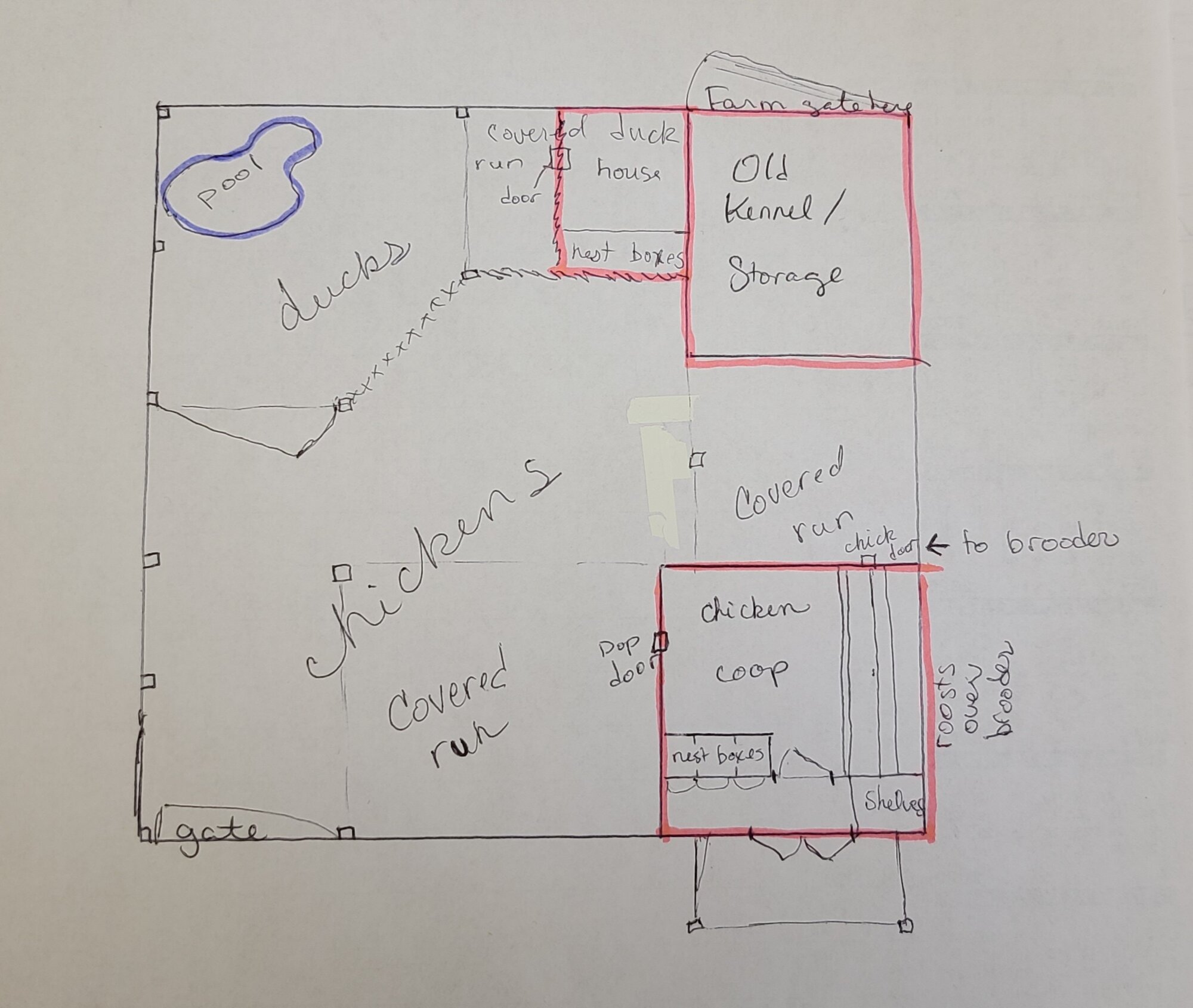 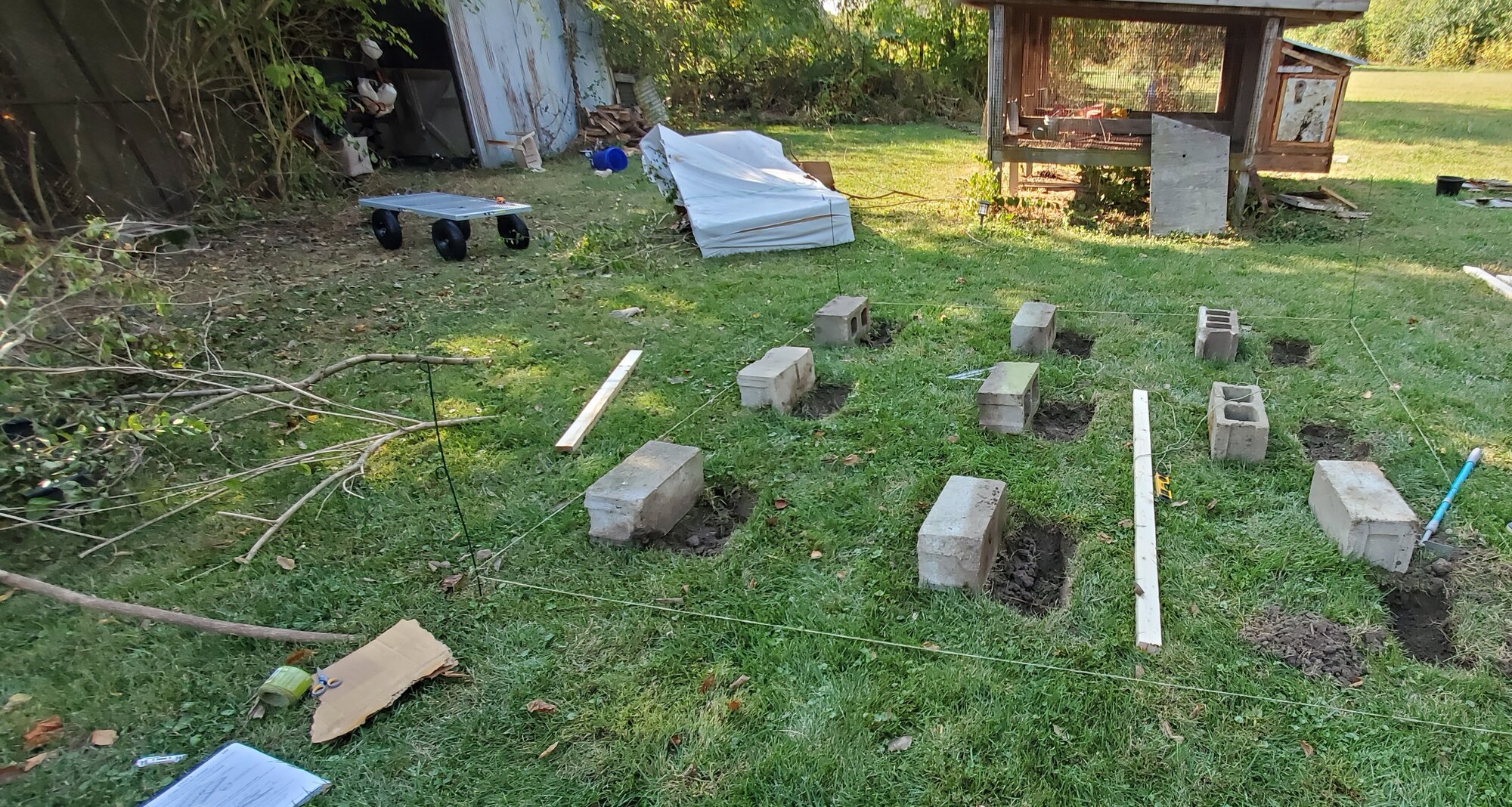 We made some mistakes along the way and wish we had let Lowes install it for us. (Totally worth being double the cost, by the way, for anyone out there that may be contemplating doing this. For this model, at least, the floor and roof do not come with the kit. By the time we purchased those and installed them, we wish we would have let them do it for us. But... we made it!)

Over the winter we had a lot of other projects come up with the new house and realized we weren't going to be done with this project anytime soon so we got them some TSC and Wayfair coops to get us through which will be repurposed as a quarantine coop and a bachelor pad/timeout coop as needed. Sounds like I'm all in with chickens!

We also decided to keep the former beagle kennel as it was incredibly solid and would be repurposed for storage down the road.

Here we are with the run shaping up. The run is 4x4x8' posts wrapped in hardware cloth that skirts out around the bottom of the run. We also installed 6 electric wire around the run - some of which was installed at this point - and a 30-mile energizer which we hope will be enough to deter the pack of coyotes that sat and howled on our back porch our first night in this house. We added a window over the door and will add one more when we can decide on placement and are adding some other vents in the wall and roof (solar with a fan) for ventilation.

Over the run, we ran some wire leftover from the fence between the posts and under chicken wire which then gets tucked up under polycarbonate panels. The polycarbonate panels provide some shade and a good amount of rain runoff which will feed two barrels and the duck pool and hopefully keep the run from getting too soggy. We are contemplating covering more of the run with these since they do allow a fair amount of light and would increase our water collection and give the chickens more of a space to use on a rainy day.

With the roof on, we moved the ducks with their temporary house into the back part of the run that would be their home. They have about the same space, but I am less scary to them because I can stand all the way up in their run and don't look like crazy frog lady when I am in their run. They must be happy since they will now let me hold them and are come running when they see me. They had been more flighty, so this is awesome! Yay! 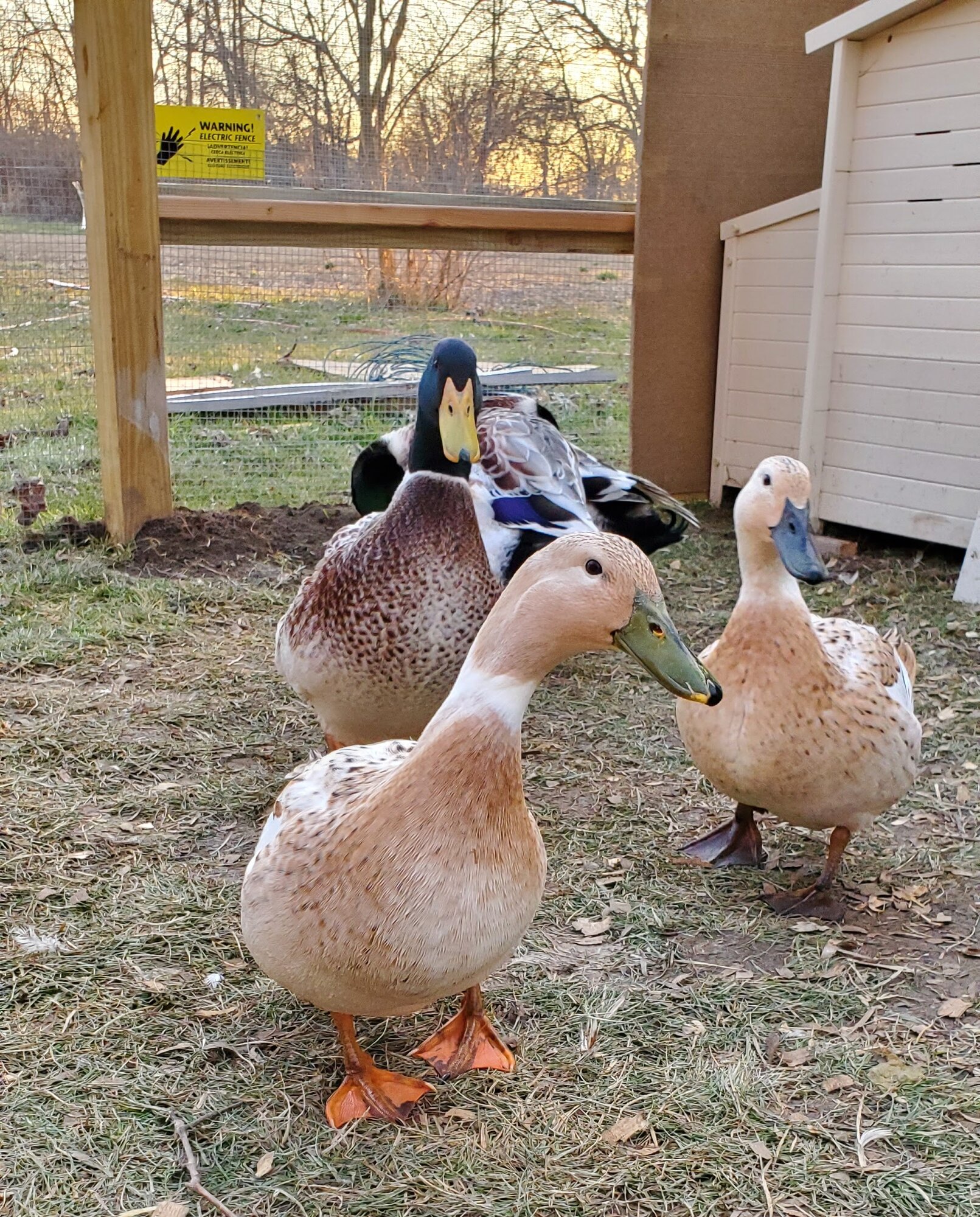 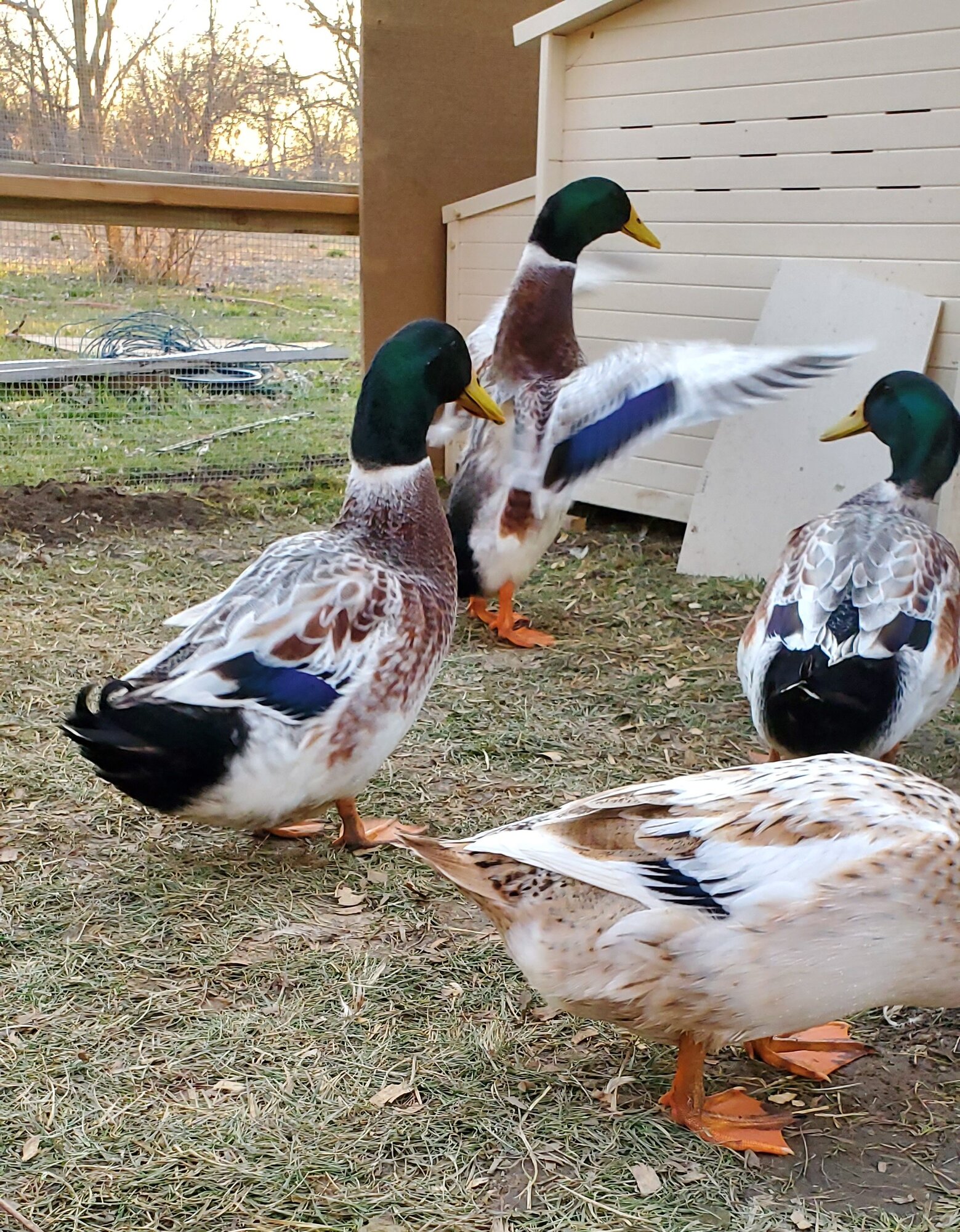 When we moved the ducks out, we put up the first cameras also. We can see the coop from the house, but this gives us a better view of what's going on as well as nighttime recording. We don't have the electric panel installed yet, so their heated water bowl is on an extension cord here for now. We also put on a gate and used pickets to create more of a "stall" for them to block wind and give them more space than the little wayfair house. The polycarbonate panels will also cover their stall, but for now, we have a temporary roof while we tackle the inside of the chicken coop.

I've been on the chipdrop list for so long and they called while we were building and brought us 3 free truckloads of logs and woodchips. We're incorporating some of the logs into the run as we go and everyone loves them. (We replaced their water right after this. They have the superpower of making it dirty faster than we could have imagined possible!)

Now that the ducks were in their space, we were back to work in the chicken run. We closed off the remaining holes and spaces in the run and brought RooBoo out to hang with us while we worked. 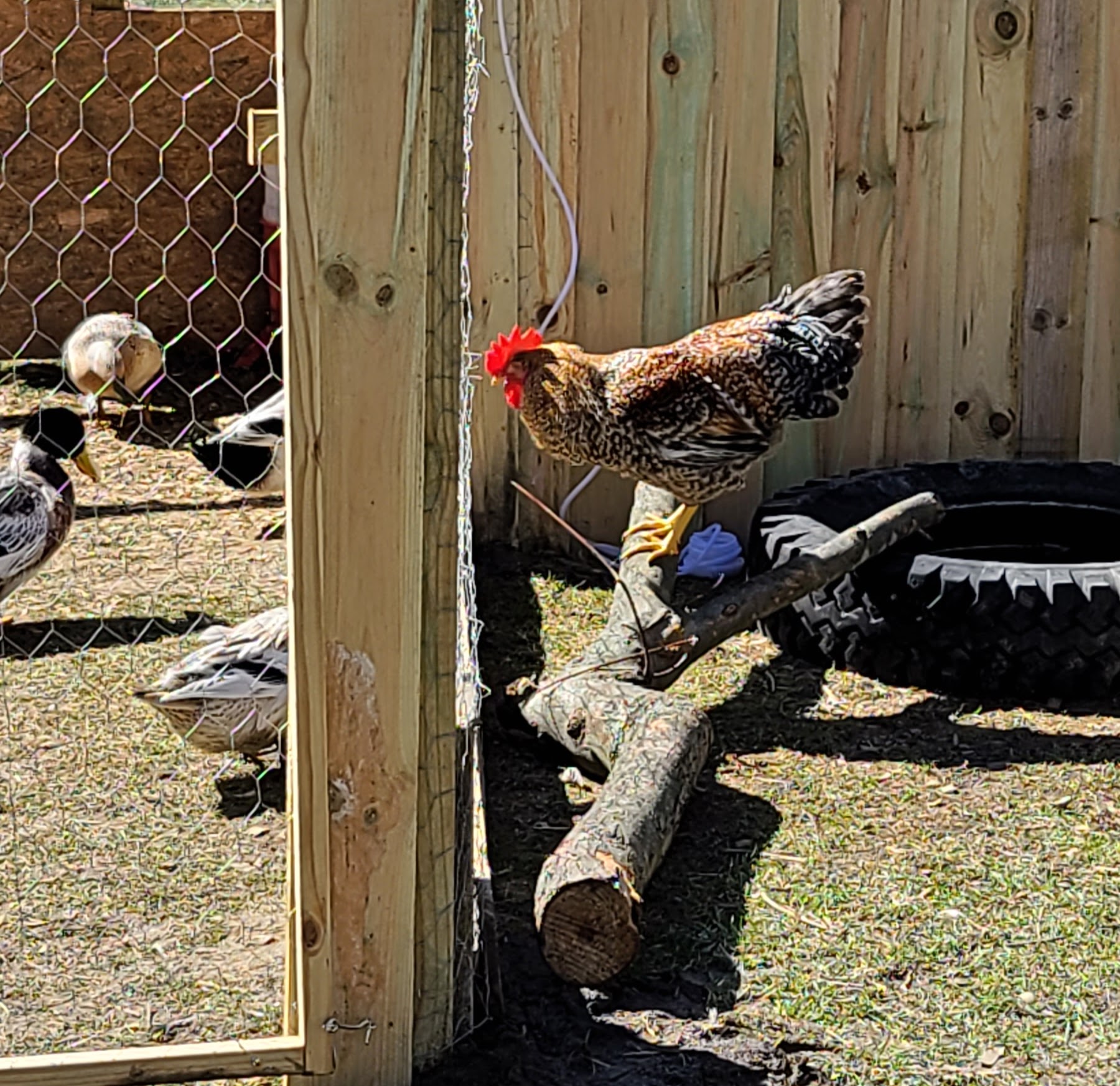 We brought one of the TSC chicken coops that the little girls had been using into the run, followed by the little girls themselves. Tucked up in my jacket, they were happy to take the walk. We put the TSC coop under roof panels as the quality does not seem to be able to survive our weather. 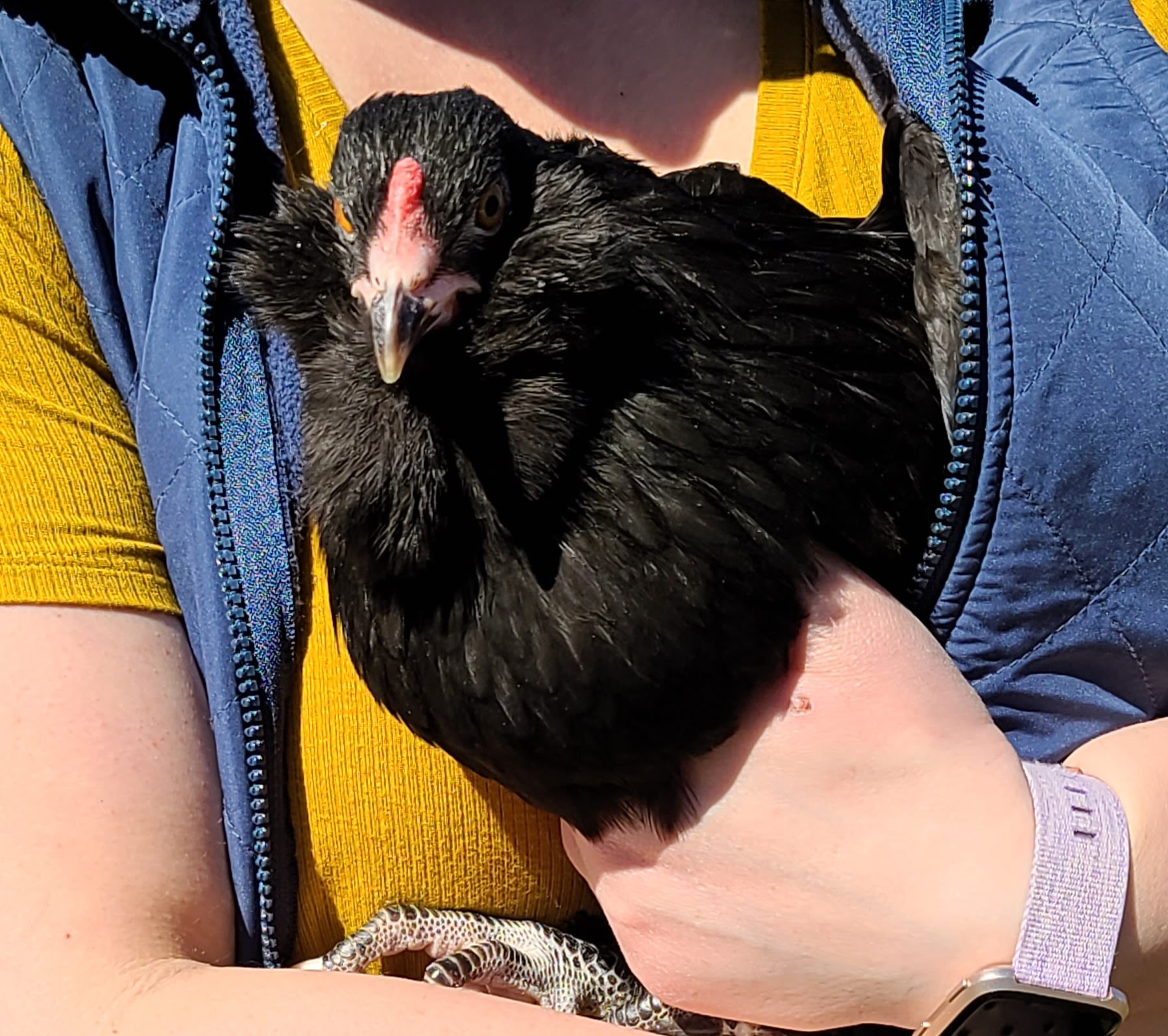 "Wonder where that door leads?" 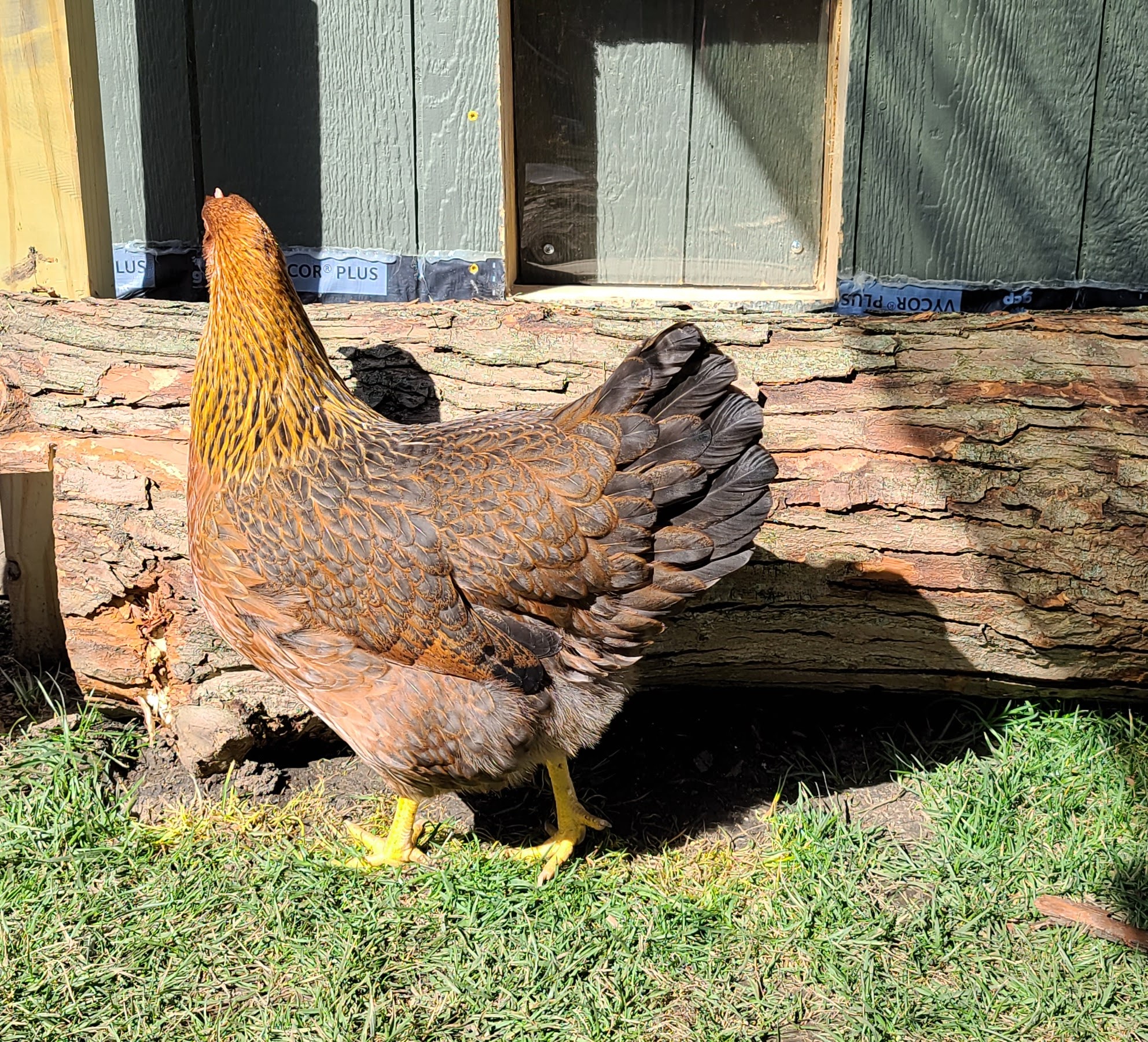 Meanwhile inside the shed coop, we laid some sheet vinyl and put in styrofoam insulation between the studs befor covering with some damaged wall paneling we found at HD for $2/panel. We borrowed the nest boxes from our chicken tractor until we can build the rollback boxes hopefully next weekend.

Next step was adding a wall two feet inside the door. This is to give us some storage and make the nesting boxes accessible from outside the chicken occupied portion of the shed for the rare occasion we have someone looking in on them for us. This is also to allow us some buffer space so the chickens don't come racing out when we open the shed doors. Nothing fancy, just 2x4s, some fence picket scraps, and chicken wire. 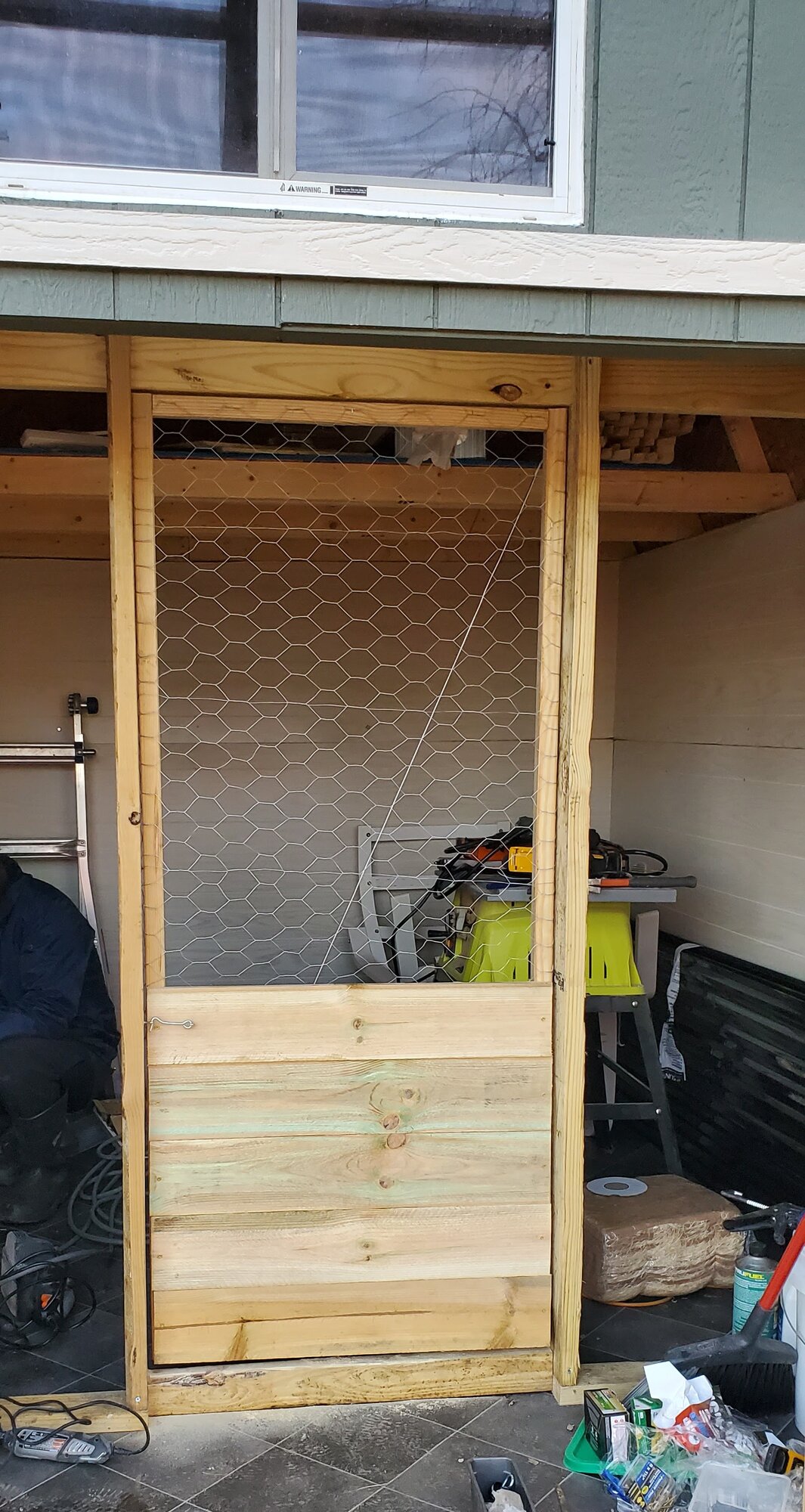 Now the roost bars... hope these are an ok height as there are so many different opinions out there. We did one with a 2x4 and another with a 2x2 and we'll see what they prefer. Under the roosts we put a board that will hold sand and be the roof of the brooder. We have removable panels that we will attach to the front of the space under the roost bars. We also put up some smart lights and another camera.

DH also installed a door that is controlled by an app as well as some rules about when to open automatically. This one is very simple, less expensive than the complete kits, and did not come with a door. DH laughs at the look of this one, but it is doing its job nicely. We still are deciding about what rules to set so if you have some suggestions on this, drop me a line and thank you! 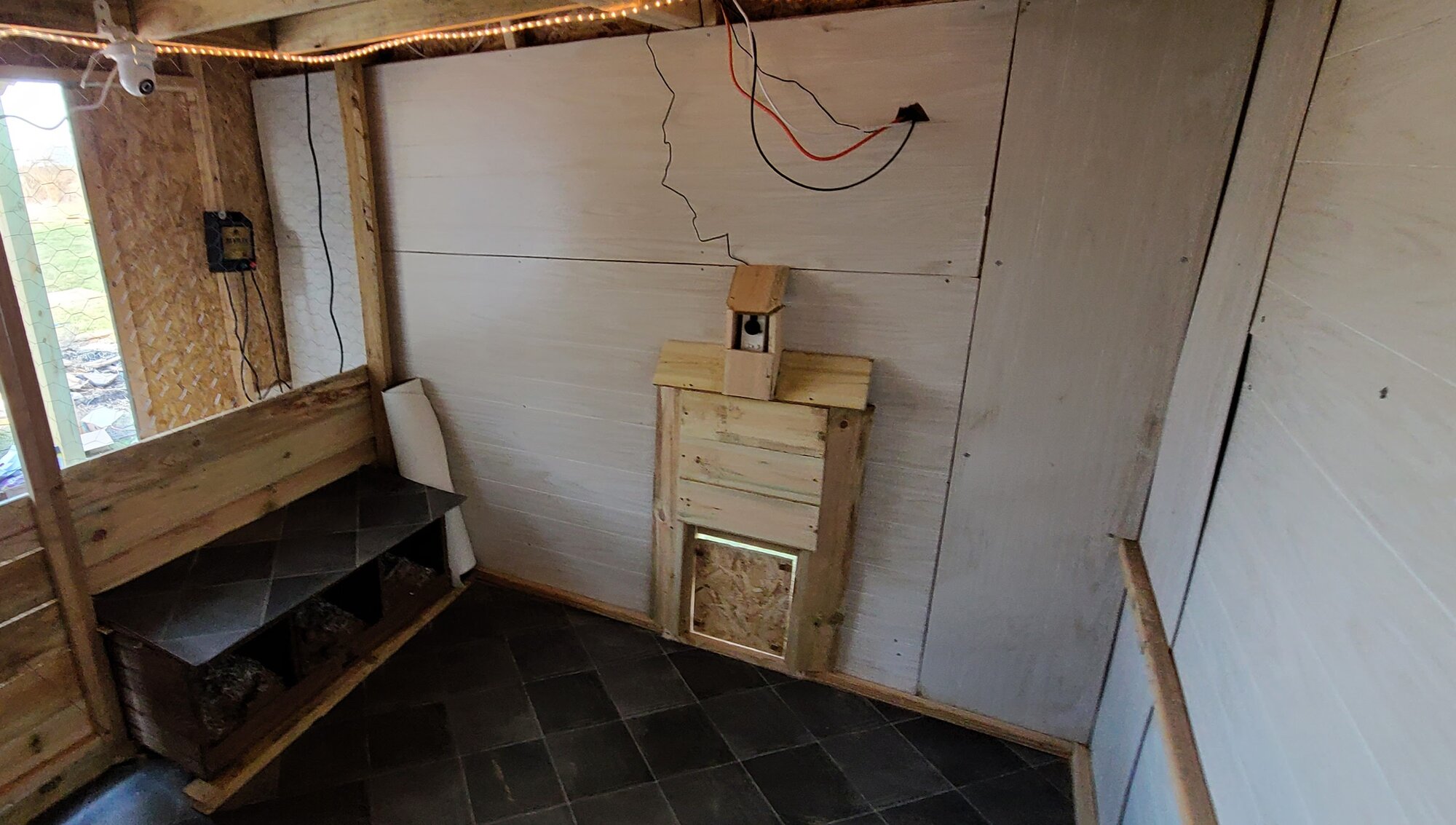 First eve in the new coop came and the sand that was supposed to go in it needs to dry out so it's pine shavings for tonight. Will sweep it out and add shavings once the sun has warmed the sand. Someone snuck in an egg while we were spreading shavings.

The two flocks got closer as the night wore on and seemed to be better friends today.

Still a ways to go! Don't think it will ever be done, but the chickens and ducks get to watch while we do the next parts. Like cleanup!

Inspired by @azygous article on brooding chicks outdoors, we've added brooding space under the roost bars, which now also have been extended to the other corner. (Will never brood another chick in the house hopefully!) 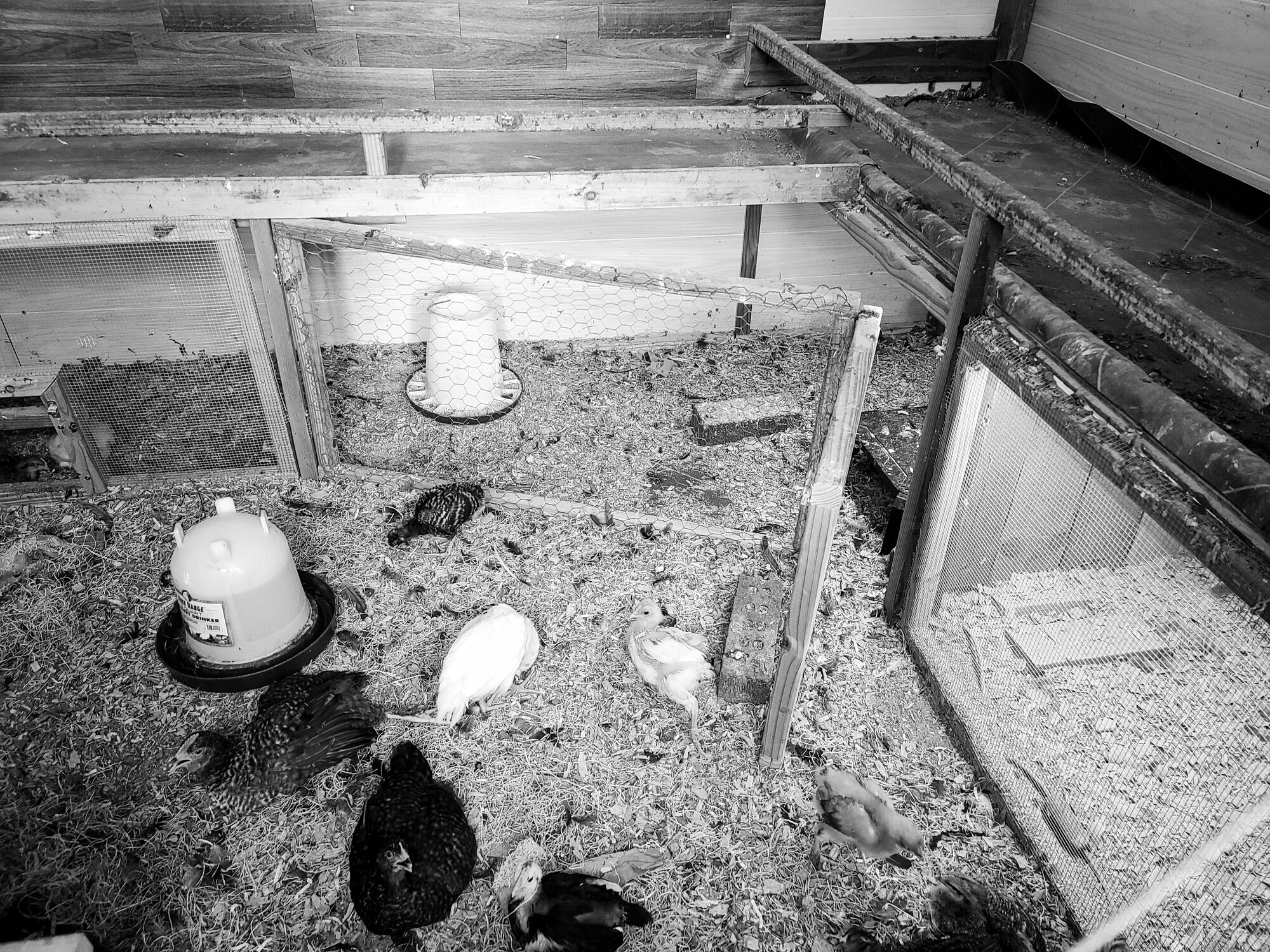 The space can be blocked off to a section or two for Littles or fully open as they get bigger. Here they're about a month old and preferring to spend most of their time out with the rest of the flock most of the time, but still have the option to scoot back to safety for some quiet time if they want.

Added sand in the chicken run and river rocks in the duck run for easier cleanup.

We've also added a drain in the ducks' pool until we can build something more permanent. Doing so, we can collect the water from that drain pipe to fertilize our fruit trees and non-root vegetables. The ducks live the new pool even if it is just a kiddie pool!

Duck house is now enclosed with electric for the Webcam and smart door and, as needed, a brooder plate. Suntuf panels on the roof which are covered from inside now that the hot weather has come. (No more straw now! That didn't work out for us.) 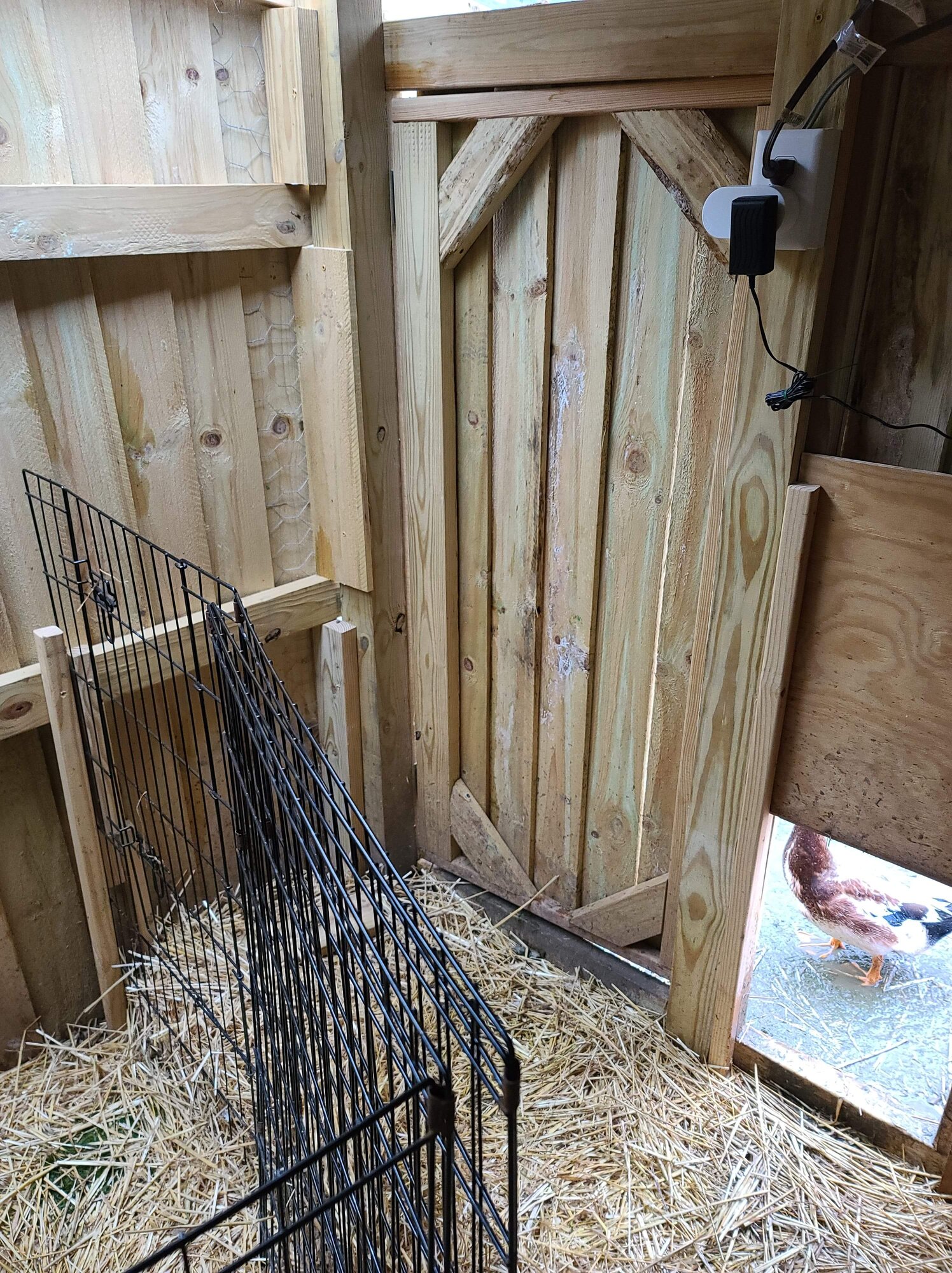 They love hanging out with us inside and outside their run/coop. We enjoy having them around! 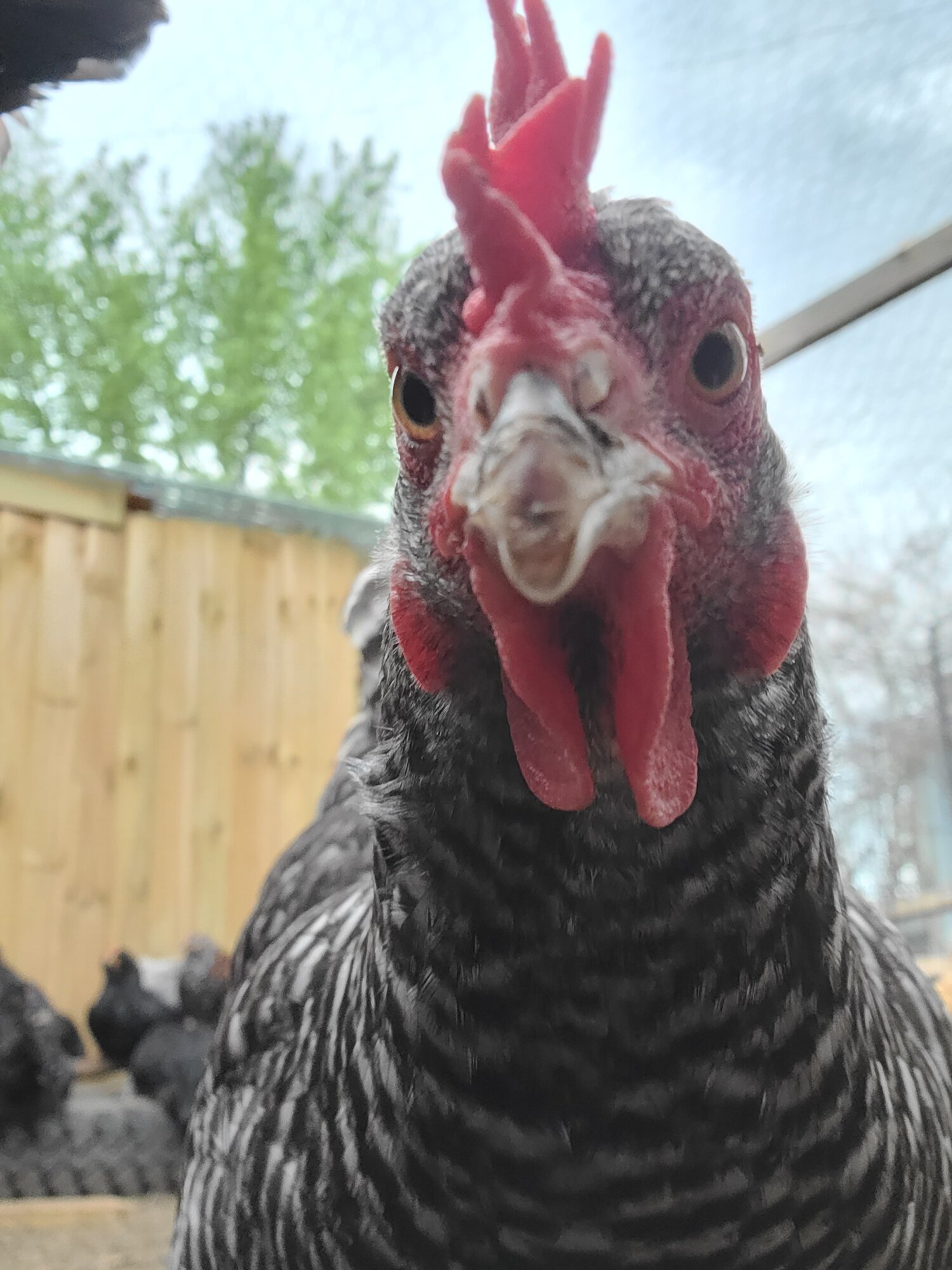 AgnesGray
Thanks for reading it! Hopefully one day it will be done! :)
Read more…

This reminds me I need to update this page, too!