Well this afternoon my mother informed me to come and see something. I didnt think I would be looking at this brown thing called an egg. But there I was amazed and astonished at the little egg. She said she found it cleaning our black hens sleep area. I was already coming to think on who could have layed the egg herself. I know its Silver. She has been doing some quite unusual behavior lately. I attributed it to being squatting-like gestures. I wonder are there any other signs out there that our little hens are ready to go in the laying department that we might be missing? We know of one already

. We are most excited over this first egg. 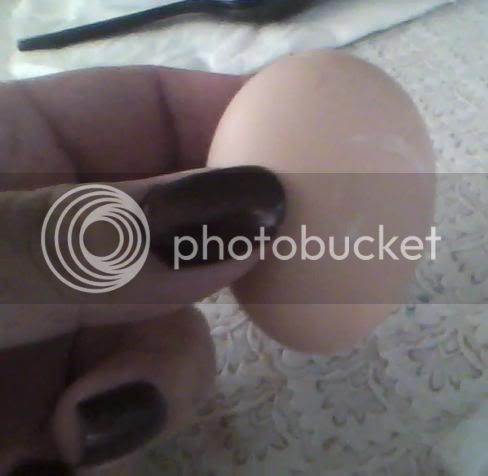 Aww lucky you have eggs!! Do you breed your chickens? What type of chickens do you have?

Quote:
Actually we were given four chickens about four to five months ago. I believe our brown ones are Buff Orpingtons though one is catching up in size to the other. Then they gave us two black ones as well. I think someone identified one as Astraulorp however you spell it. The other might be one too but I note some of the same characteristics as our buffs but in black. This would be our first egg ever. We dont breed chickens as of yet. I think they mostly will be egglayers and not mothers themselves.

Sounds cool. We have what we thought was an orpington but it was a leghorn so the comb and size can make a big difference in what type of breed. Seems like cool chickens but be careful when collecting eggs, I've broken many

Quote:
I think this one has a hole in it that wasnt from us lol. But yeah I do believe I have a buff. She has the right size and shape...the giant fluff and stuff. She does resemble them the most. The one as my icon she seems a bit smaller but is catching up in size definitely lately.
Last edited: Dec 30, 2011

Congratulations on your first egg! It never gets old for me to find an egg in the nest box.

I got my first egg yesterday! Such an awesome thing to find an egg, isn't it.

Congratulations! We got our first egg on November 12, 2011. That was so exciting for us. We saved it and had breakfast with our little granddaughter and she ate it. It was a double yolker too.

D
first eggs this week, but they’re on the floor
2 3

We got our first egg today!