Hey all. Recently my husband has been more involved in the chickens than he claimed he wanted to be. He not only is planning a larger coop/run so we can get a few more chickens but he made a comment the other day after discovering we have a rooster in the flock (they're all still young, 3 months) He has always told me we would have to get rid of any roosters, (my neighbors don't want me to keep him either) but My husband brought up free ranging the chickens, and keeping the rooster. I originally wanted to free range, but I'm worried about predators. We have a neighbor with an out of control dog who routinely tries to attack us in our own yard (they have no fence, no invisible fence and do not keep their dog on a leash) She has attacked outdoor cats in the area. Not to mention, we live in an area that is densely wooded and we have a large population of Raccoons, Coyotes, Foxes, hawks, owls... There was even reports of a Black bear seen in the area a few years ago, but I've never seen one. You name it.. We have it.
Any advice for keeping the small flock safe from predators if I do decided to free range? I currently have 6 chickens, 5 hens and 1 rooster. (I already have dogs, but they're not trained guardian dogs.)

i free range my chickens.. i live in the country on 6 acres of woods.. and while i have seen foxes and critters all over my property, even photographed foxes walking right by the coop.. the only "predator" i've had trouble with is a neighbours dog.. a close call with a hawk once.. but even in penned up enclosures, other predators make it in.. and then ive seen hens trapped inside with it..

as for having your own dogs, as long as they don't chase your own chickens, they work great at keeping foxes and critters away..

my chickens free range and are excellent for eating ticks, spiders, bugs..

knowing you have all those predators, choosing to still free range, i guess you realize you will lose some, eventually all of them.

Depending on how much area you have, you could try electric fencing, or train the dogs? But definitely make sure they have things they can hide under or around, run to when they see something. A good flock master rooster makes a big difference too, in my opinion. They are much more alert than most hens and will also try to fight for their girls when necessary. Also choice of birds can make a difference. Some free range better than others. Some are quick and alert, some are slow and trusting. You will lose the slow pokes first. Human presence often helps too. Spread your own scent around, walk the area often, cut down on the predators opportunities.

I had a small flock of golden comets at my farm. I liked Brahma roosters for their masters. At one time had 10 girls, plus a couple roosters along the way. Down to my final girl now, she lives at my house. But i had some happy girls for a long time.

Right now their coop and run has 1/4 in hardware cloth all around and on top, we have 1/2 in buried under the ground. (Call me paranoid LOL) I lost 2 to a raccoon break in their 2nd day in the coop, but it showed me where I went wrong with the locks.

I have 4 BCM hens and a Welsummer hen & roo.
I just don't want to lose my chickens. These are my first ever. My Bernese Mountain dog wants to chase the chickens. And they're kept behind a fenced yard when they're outside.
I have 2 acres and about 1/4 of it is wooded, we back up to a wooded nature preserve as well, which is huge!
Last edited: Aug 22, 2017

I think ur biggest challenge is going to be the neighbors dog. If it goes after cats..probly will go after chickens. There is a fencing system u can get that is electric netting type. It comes in green and would blend in to the background..bout 3/4 ft. It us pre assembled with stakes. U could try putting it between ur property line and the neighbor. If the dog hits if once or twice..may work to deter him. Also, feed/water your birds at the coop so they must always come back for feed/water. I free range my birds..but they stay pretty close since I keep food/water inside the coup.and I have them trained to go inside every night for lockdown. Unfortunately..u will lose birds to predation. Those electric netting fences work decent to deter most ground predators. I have had trouble w one neighbors dog...despite living on 29ac...i keep a gun handy...if u see him on my place..i holler at it and shoot in the air at the same time. Works well...but I would not hesitate to shoot it. I put a lot into my chickens...and I will not tolerate an irresponsible neighbor that can't do the right thing and control thier dog. It's just plain ignorant to let your dog destroy other people's animals. I have..n the past at a different location had to get animal control involved in forcing a neighbor to be " responsible" after his chow/ pit mix came onto my place chasing/killing my animals. Got really ugly..but I had small children and it was a safety issue. People DO NOT have the right to destroy your peace/tranquillity on your land..PERIOD!

Oh...another idea that might work for you better...let them out to range a couple hour b4 roosting/thier bedtime. That way..they will only have a couple hours out and won't go to far. You can plant some really nice chicken grazing spots around your coop to...there are mixes of grass seed u can plant/buy specifically for chickens. Plant ur chicken grazing area on the opposite side of ur yard away from the irresponsible dog neighbor. Hens live nice fresh baby plants to munch on. So..by planting a chicken grazing area and letting them out a few hrs in late afternoon you will be able to free range them some but keep them safer

I can't imagine living in fear of a neighbor's free ranging dog who threatens me, much less my animals! Animal Control would be involved, and then the dog would be gone. For the chickens; free ranging is always a risk, but the birds so enjoy their time outside, I think it's worth it. Usually. "Good fencing makes good neighbors" is totally true!!! Electrified poultry netting works for most land predators, or multiple strands of electric tape, with a very good charger.
I do like having roosters in my flock, but only keep individuals who are polite to people! Mary
Last edited: Aug 22, 2017

Folly's place said:
I can't imaging living in fear of a neighbor's free ranging dog who threatens me, much less my animals! Animal Control would be involved, and then the dog would be gone. For the chickens; free ranging is always a risk, but the birds so enjoy their time outside, I think it's worth it. Usually. "Good fencing makes good neighbors" is totally true!!! Electrified poultry netting works for most land predators, or multiple strands of electric tape, with a very good charger.
I do like having roosters in my flock, but only keep individuals who are polite to people! Mary
Click to expand...

That's what I ended up doin when I had issues with the very uncooperative chow/pitbull neighbor! I fenced in my property and adopted two rottweilers !

Not sure if it will work for you or anyone else, but I can share what I have put in place, and I have all manner of varmints.....foxes and coyotes.......and an abundance of neighbors dogs. I've never lost a bird to any type of predator. 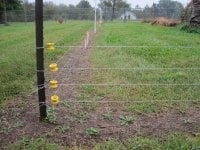 I know of at least 3 dogs that have tangled with it and they won't go near it again. If you are having trouble with your neighbor's dog coming on to your property, put one of these up. No fuss, and no drama with the neighbor or his dog. Hard to believe, but it will also keep in the birds.

As a permanent fence, it has to be maintained by keeping grass and vegetation away from it to keep it from grounding out, but also to establish a visible reminder of where the fence is for both the birds and predators. A fence of poultry netting is probably more effective, but maintenance issues are a bigger problem and they cost significantly more. For small areas, it's doable. For larger areas approaching an acre or more, the wire fence is far less expensive.

But if you want to allow your birds to safely roam about your property, this is what I'd recommend.

Thanks for all the wonderful advice everyone! I will run these ideas by my husband. I would really like to let my birds out, I know they would enjoy it. In the end, it will be my husbands decision. He doesn't like the idea of putting in fences more than what we already have for the dogs.
He may go for the wire fencing!
Thanks again!!!
You must log in or register to reply here.
Share:
Reddit Pinterest Tumblr WhatsApp Email Link