A few days ago my sweet Golden Cuckoo Marans, Rowen (23 weeks old), attacked my Welsummer cockerel, Wren (18 weeks old), for no apparent reason that I could see. I was right there but it happened so fast. He may have tried to mate with her but doubtful as I haven't seen him attempt such things with anyone yet (I have 33 chickens ranging from 18 weeks to 6.5 months, 2 of which are males, plus two 2 week old hatchlings, totally separate from everyone else with mama). Wren is a sweet boy and has never been aggressive with anyone. I immediately broke them up and she went back for more, ending up with an injured cheek. 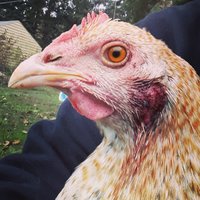 I immediately separated her and have kept her in a large dog kennel in the grass and clover in the day and inside at night. Today she looked pretty well healed up and just to be on the safe side I put a little Pick No More on her remaining scratch. All blood had been cleaned up, of course. She and I ventured back to the flock and literally the second she saw Wren, she ran at him and attacked him again. He defended himself without injury this time but I had to catch and return her to the kennel. In the process, several other girls chased and pecked at her.

Rowen (and her GCM sister Willow) are two of my top four favorite girls and I'm just heartbroken that these issues have arisen. I hate having to keep her locked up -- she's a free spirit and loves hanging out in the tall oak trees around their massive run. 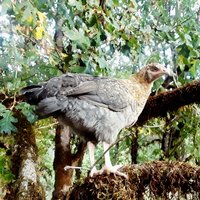 I don't have a second coop or space other than the brooder house that's already occupied and don't feel it's kind to keep her locked in a kennel for too long. My question is do chickens get over their "hatred" of each other? I have no idea why she dislikes Wren and keeps attacking him (she's totally accepting and tolerant of my other cockerel, Tarly, a Barnevelder, so it's not just a roo thing). Should I be patient or is that just my love talking instead of logic? Would she be better off if I rehomed her? I won't keep putting them in potential danger of being around each other, but I'm at a huge loss. Any input, advice or enlightenment would be greatly appreciated. I've raised a lot of chickens but haven't had an issue like this before (or such an attachment to the chicken in question). Almost any other chicken I'd cull, but there's no way I can do this with her. She's not aggressive with anyone else ever, other than the usual/occasional roost time pecking. 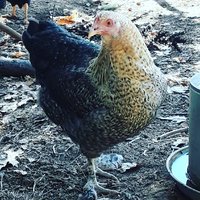 Just a guess, maybe she is the leader (dominant) and he is almost ready to take over and she does not like that. IF that is the case it should work its self out, but do keep an eye on them!

Hens can kill cockerels especially when they are younger. It isn't hatred just part of the pecking order. How long has the cockerel been integrated?

aliciaFarmer said:
I've raised a lot of chickens but haven't had an issue like this before
Click to expand...

Curious how many and for how long have you kept chickens?
Have you ever had this mix of ages?
Were all these birds raised from chicks together or were some added at different times?
Ever had multiple young males at the same time?

Chicken society can be complicated, until you understand it.
The 2 young males are likely a big part of the problem,
I would remove them instead of the injured female...
....and get that broody and her chicks back in with the flock asap,
before she loses her broody mojo.

It's always good(essential, IMO) to have separate enclosures or crates to isolate problem birds.

Increase A Bit Protein in their diet for few days for calm.them down

It's a pecking order situation. The more you remove and try to introduce her the worse things will become. Others in the flock, as you have noted, will start attacking her. As brutal as it may sound a fight until submission by one bird or separate pens are most likely the only solutions.

RWise said:
Just a guess, maybe she is the leader (dominant) and he is almost ready to take over and she does not like that. IF that is the case it should work its self out, but do keep an eye on them!
Click to expand...

It would be awesome if that were the case but unfortunately it's not.

Soon2BChixMom said:
Hens can kill cockerels especially when they are younger. It isn't hatred just part of the pecking order. How long has the cockerel been integrated?
Click to expand...

They've all been totally integrated and living mostly peacefully for just over two and a half months.

Soon2BChixMom said:
Hens can kill cockerels especially when they are younger.
Click to expand...

Possible, but extreme so not probable.
Those hens can really give young cockerels a rough time!


Saaniya said:
This behavior Is also a part of cannibalism
Click to expand...

Naaahhhh!! Unless birds are all starving, then maybe, but Naaahhh.

N
Aggressive hen out of nowhere

J
Scared, aggressive hen, what should I do?
2