Rabbit death-Need to know what caused it!

hello, First a bit of background,
We raise Siamese Satin, Mini lop and Mini rex rabbits. I have been raising rabbits for three years now. I also raised them when I was younger, for most of my childhood. We sell the babies to fellow show people, to people who want them for pets, and also to a local pet shop that recently opened in our hometown. It is a small pet shop family owned and a wonderful place. They do not know a lot about rabbits as their specialty is with fish and dog grooming. They buy usually four young rabbits at a time, every two to three months from us.
The last rabbits they bought where my five week old Mini-rex kits (I have sold kits at four weeks before, if they are eating etc, well on their own). It was a litter of four and they wanted all four. The kits where eating and drinking great on their own. I delivered them with their pedigree's on Tuesday the 16th. I got a call yesterday (the 31st) that there was a "problem" with the rabbits.
I called her back this morning (worked till ten last night) and she said that yesterday one of the broken otter's a buck if that is relevant stopped using it's back legs, it was still eating and drinking and would just pull itself along on it's front legs. They separated it thinking perhaps it had pulled something playing with the others (they are very active). It still kept eating and drinking, and was going to the bathroom. (she didn't mention anything about loose stools or anything like that, just said it was still going to the bathroom). She doesn't think it was paralyzed as it could feel it if you touched it's back feet. About three hours after they first noticed it acting odd, it died, no screams, no signs of distress just laid there and died. She was concerned it was some disease. Our rabbits here are just fine, happy, healthy and active, I have NEVER seen this happen before and I have had quite a few rabbits in my time. The only thing I have ever lost a rabbit to is heat, or predators if they get loose.

Anyone else ever seen this before? I am going to be contacting some of my fellow breeders to see if they have, as well as doing some internet research, but this is always my number one place to come for information.

probably broken back. They can still often feel the legs. I would think this even more if the babies are able to be held by the public.

Another possiblity is E. cunniculi but I dont think a baby that young can show symptoms yet.

Necropsy would show exacly what happened

Sounds like someone dropped/mishandled the poor thing and broke its' back.
Last edited: Aug 25, 2011

I'm thinking you may not know that it is illegal to seel rabbits under 8 weeks of age. Hi mortality rate from week 4-8, because of their delicate digestive system.

Quote:
That is what I am thinking too. I just want to make sure that it's nothing genetic, or contagious.

If they want to do a necropsy they can. I doubt they will though, she seemed like she thought it was something my rabbits have. As the first thing she said was "Is there anything going on with your rabbits?" there isn't my rabbits are fine.

I will keep checking in to see if anyone else comes up with anything else. I will call her back tomorrow and let her know.

Agreeing along that the most common thing that comes to mind would be spinal injury, or e. cuniculi (which about all rabbits are believed to have even in the womb, yet just never show symptoms).

Although kit loss is highest between 4 & 8 weeks old, I think age restrictions might vary from state to state.

I think someone injured his back or he was startled and jumped or flipped breaking the back. I saw that happen once and it happened and looked just as you are describing...it died within a couple of hours.

Quote:
My bet's on that, too, seeing as she's never seen any issues in the herd over a 4 year period.

Even with a milder spinal injury the resulting cord swelling can cause death. It could have even caused more injury when they moved it to the other area. Their backs are broken so easily...a quick movement, wrong kick, or moms stepping on babies in the nest.

Thank you! I also was thinking back injury but when she said it wasn't paralyezed I thought it must be something else. I will call her back tomorrow. Also I usually wait till 6 weeks (have never waited till 8, but sure will if its what is best for them) Usually by 4 weeks our does don't want anything to do with them, so we separate them, then usually at 6 weeks they go to their new homes. I let these go earlier, as I have one other time, because they seemed like they where doing great, and they had been out of rabbits at the shop for almost two months waiting for a litter from me as one of my does didn't take on a breeding. I know this isn't a excuse, and I will from now on be waiting till 6 weeks (unless I am told 8wks) if for no other reason then simply to give them some more time to grow and get stronger.

I also heard back from some fellow breeders who let me know that Mini rex are a bit more prone to back issues then other breeds, and that the back injury could of been caused by something as simple as him hopping straight up and then to the side or being run into by another when they where playing.

Such a cutie he was! 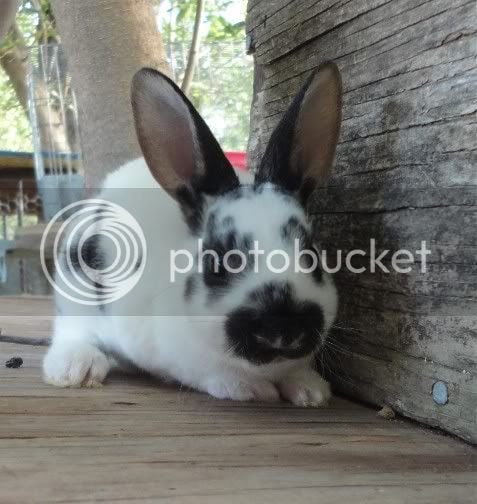