How do you raise meal worms?

Depending on how many you are looking to get its super easy.
Get three bins. (this depends on the amount you want to produce.)
Get some meal worms.
Put some wheat bran in all three bins.
Put the meal worms in one of those bins.
Let them grow, they will turn into these white alien looking things.
Those things will turn into beetles.
Separate out them into their own bin.
Let the beetles do what they do and die.
Not super long after that you will notice the bran moving like its alive.
Take the stuff in that bin separate out all the living beetles and white alien looking things.
leave the worms in that bin. They may be to many if that is the case take half and put in another bin.
the last bin should have the adult beetles in it.
Then it all starts over.
I use carrots to give them moisture. potatoes also work, and anything you can find. I use those two because they just dry up and you can toss them at your convenience. If you use something else you may have to remove it before it molds if the worms don't eat it fast enough.
I didn't watch this whole video but gives you a visual of what I am talking about. I produce a lot less and use a much smaller drawer system. Like one you would keep pencils in on your desk kinda' thing. 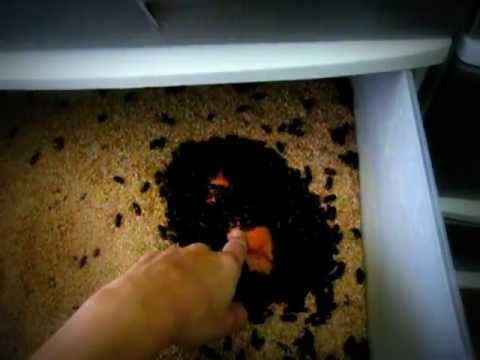 Wow, that's impressive! I appreciate the idea of using carrots and potatoes versus apples which seem to mold quickly.

E
Am I missing anything for my first chickens?
2

H
Question about using a dollop of safeguard

Raising Meal Worms-to separate or not to separate

K
Is this fowl pox or pecking wound or am I paranoid?!