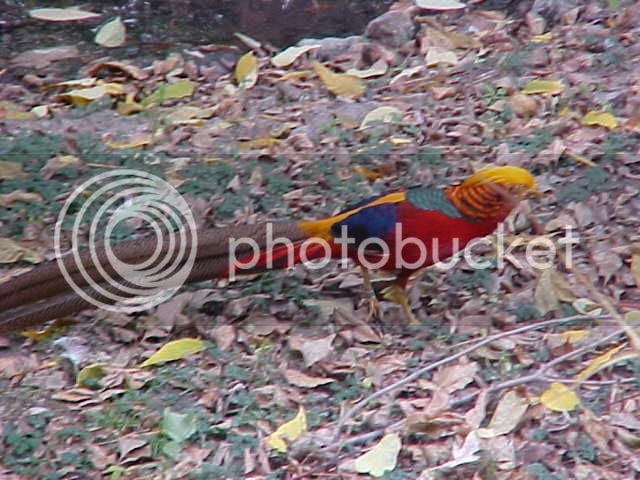 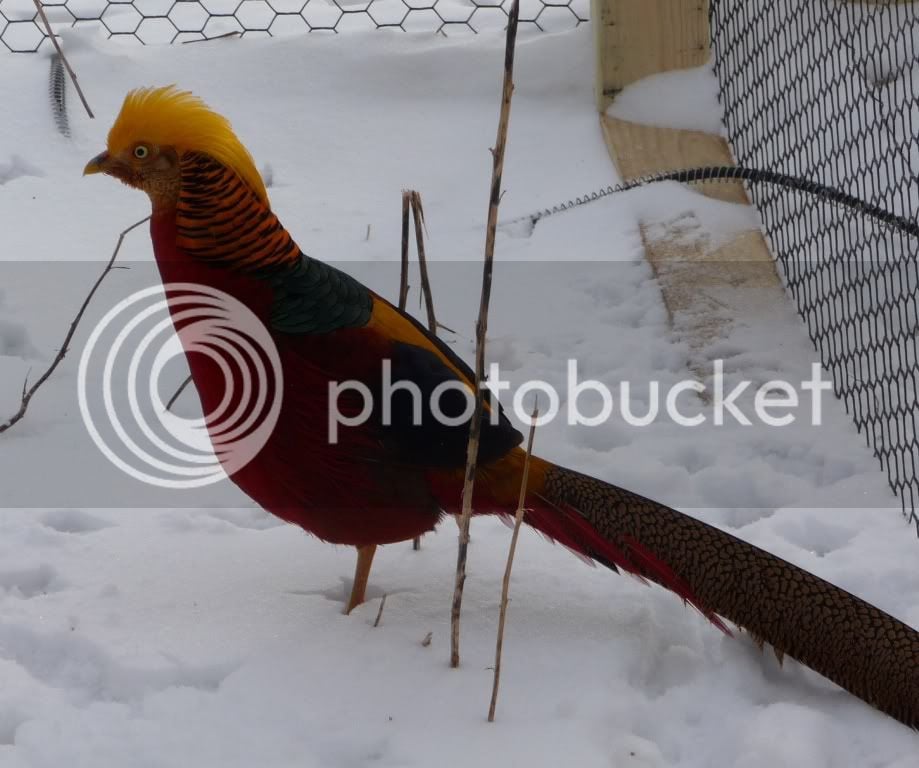 I noticed a red gold pheasant in the background of your photo.
This is my "dream bird" that I would love to have someday when I have more room.

Can you answer a couple of questions about them? Can they be tamed to sit on your hand or shoulder? Do they have to have a large "flight" cage? Do they have calm or excitable temperments?
Can you keep several males together if there are no females in the cage? Do they have any common health problems?

Thanks for the info.

I have seen some goldens that were hand tame. You would need to start with chicks are handle them often.

They do not require a large pen.

Yes several males can usually be housed together, just put them together before or after breeding season. You are better off with more than 2 males in a bachelor pen, when there is only 2 males together they seem to squabble more than if there are 3.

Here is a pen of bachelor males: 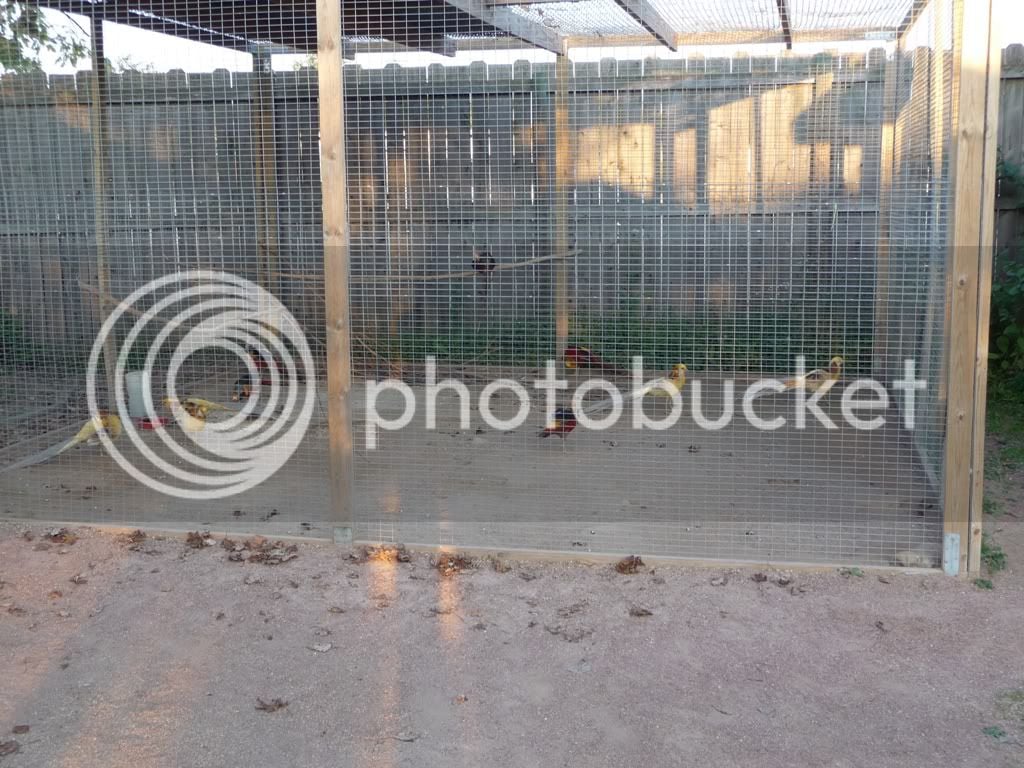 I'll jump in and mention I used to have a few species of pheasants, including goldens. By my experience, goldens were easy to tame, even birds bought as youngsters from someone else. But for truly tame ones, yes need to raise them yourself. Need to be gentle though, not much "against their will" restraining- that means no attempt at forcibly holding them trying to pet them into "relaxation"(like some people do with baby bunnies etc). That seems to freak them out pretty bad & get them suspicious of you or your hands.

All I did was hand feed from hand and let them walk on my arms in the brooder, also let them out to "play around" and when they were old enough to go outside in a pen, spend some time just sitting there and handing out treats by hand, encourage them to jump on your lap.. they really are like little monkeys, they can climb shockingly well with just their feet so it won't be long at all before they're running up your arm up to shoulder, head and back down. Many of them also just randomly flew up onto my arms or shoulders, although usually when they were hungry or thought I had treats for them.

As adults, the females were friendlier, the adult males just were too busy being "hyper" bouncing around trying to woo the females(it seems their sole life purpose was to pester the hens, ha), but they too would fly up when they were hungry or wanting treats.

I sometimes could manage to lightly pet one, but they did not really like that.. many would "put up" with that while they were hungrily eating food or I had a treat they really liked in my hand. So they were mostly "lookee but no touchee" while at same time they will willingly walk or fly up onto you.

They can and will become exceedingly tame.. so it becomes easy to forget they're still kind of wild birds.. like for example taking that cute little one outside to play on the lawn, and poof, it's over the 6 foot fence 100 feet away.. in a flash. Or 15 feet up the tree, being a little feathered monkey. And like monkeys, they won't come down because you want them to.

Despite episodes of alarm like that, they actually can free range pretty well, unfortunately hawks hit the females and juvenile males VERY hard, even if the hawks mostly leave your chickens alone.

Well that was my experience having them. They might be "common" pheasants but I really enjoyed them very much. Probably were my favorites.

Thank you all for the information. I see they take cold very well. I am in Florida, how do they handle the humidity and heat? They would be in the shade, but we still get days in the high 90's in the summer.

Are they generally disease resistant? What maladies should I look out for?

I would recommend regular deworming if kept with chickens.. 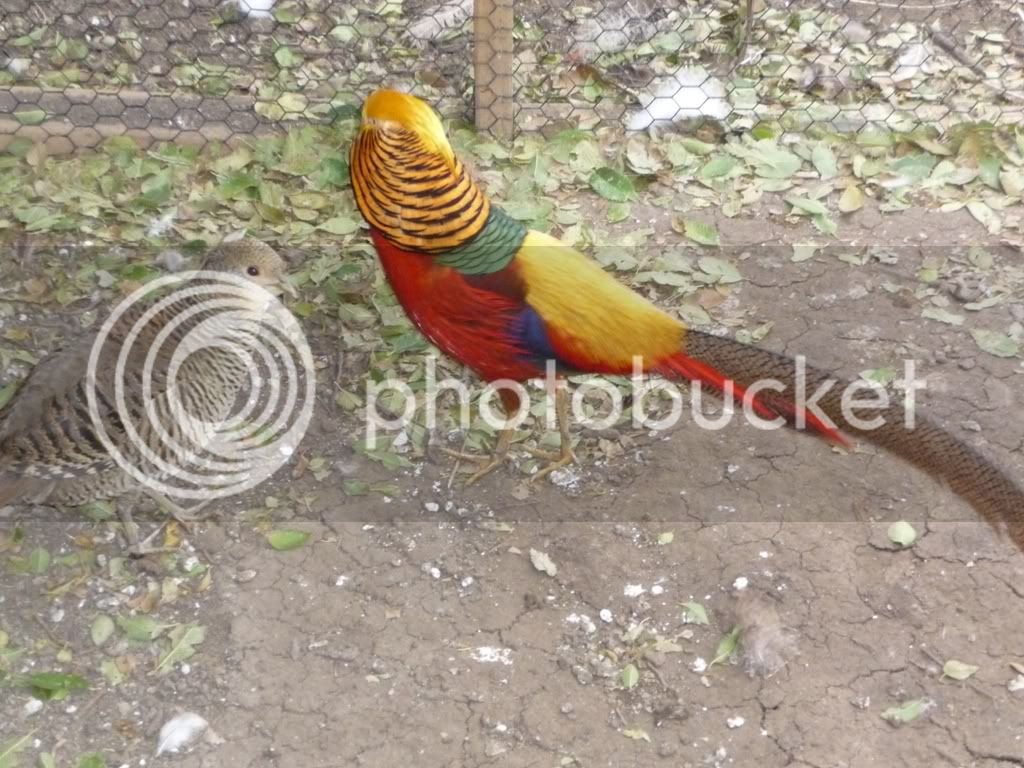 Mine seem to be pretty friendly, my males more so then the females at this time.. Mr Squeeks seems to love talking to me and seeing what I'm up too. ....... I have extra males and a YG male ........

This is one of the breeds I have considered trying to incubate some eggs from, have heard a lot of good things about them.

Am fascinated by the peach golden pheasants and have ordered some eggs which should be getting here in April. What is the history of the peach birds as opposed to the peach splash. How do they get them pure white and peach without any dark spots? Also, do they throw their color to their offspring? One last question. If you breed a peach with a red golden what do you get, and is that an appropriate thing to do ethics wize? Apologies for the horse terminology but I don't know what the technical term is for pheasant offspring!!!!! Thanks. Like your blue roan mare too!
Share:
Reddit Pinterest Tumblr WhatsApp Email Share Link