Rheas Temperament and other helpful info

We were introduced, by a fellow poultry enthusiast, to a bird called Rheas. After much research we see that some lay white eggs and others are green. What exactly do we need to know about caring for rheas. Enclosures? Medications? Vaccines? Hardiness? How long until they lay the first eggs? Do they Brood their own eggs? Simple stuff anyone might need to know prior to getting into these birds.

Here, a quick search of BYC for "Rheas" turned up this:
https://www.backyardchickens.com/threads/new-owner-of-rhea.596859/


In which I found this:
New owner of Rhea

Those ought to be a start anyway.

Hey, Dixie! Even years ago, when this site was at its best, there weren't a lot of rhea folks. So the good news is you get to be The Noo Rhea Expert! Please do post anything and everything. I've long wished I had the energy to do a serious study of all five of the family members (and there are extinct members also). I don't think you can own pet kiwis, so that leaves just the four ratites that owners can post about here. Somewhere 'out there' is Casuarius, who is nothing less than a world expert on breeding cassowaries. (I recall photos of chicks!) We've had discussions about ostriches; but it seems that not so many folks just wanna flat out own them as pets.

Here's a photo taken today. It's most unusual: the adult bird is not the chicks' Dad. It's a female. The chicks are tame-wild orphans, and observing them since we lost their Dad, we've learned that chicks pretty much 'lock onto' any adult emu in their vicinity. They went from Dad to (female) Number One, who then went bush. Then they teamed up with Felicity, even though she pecked them on the head for a week. Then finally the two still here settled down with their big sister 'Uno Chick,' the adult bird visible here. It's hard to photograph them while sitting.
They are sitting literally at the end of my carport, and the 'Lily Pilly' tree behind them is a native much favoured by emus. Wild emus will sneak right up to the house -- as well as battling the home team -- to get to the purple berries. These emus are rothschildis: 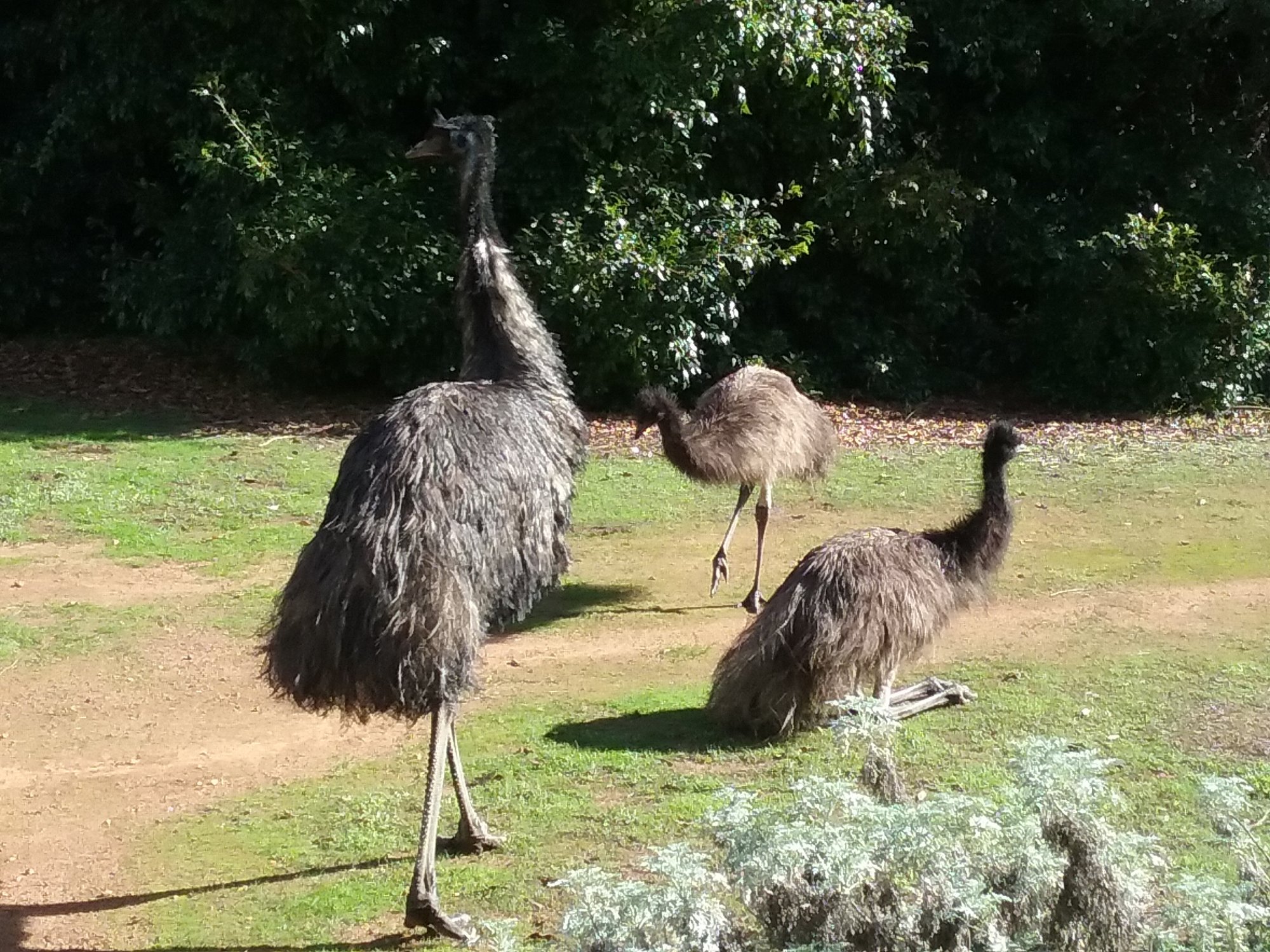 Thanks you guys for your help....

I have just over 30 rheas at the moment. Greys are hardier, whites are more fragile. They eat normal chicken food and grass/weeds. Minimum of 1/10th of an acre for an adult pair. Carpet for the first 4wks on the floor. 1m to up to 6f. Males hatch and rear chicks. Or u can use an Incubator. Start laying in their second year. Fencing 5ft tall minimum. Fairly Hardy, just need a 3 sided shelter. No medication or vaccinesomething usually necasary. Although I give mine medicated starter till 4wks old. Carry a stick with you when you are in with adult males untill you have got used to them.

Help get ducks out of house

The Beilfelder (what’s your experience?)