Shadrach said:
Someone has got a very red looking bum!
Click to expand...

Someone has a sprayed bum to stop the feather picking.

Waiting on them both growing their feathers back.

The middle of the middle roost for everyone tonight except Medh, who is taking a turn on the top roost. So far all the Campines & 1 Aracauna have managed a lone turn. The Wyandottes haven't attempted it. 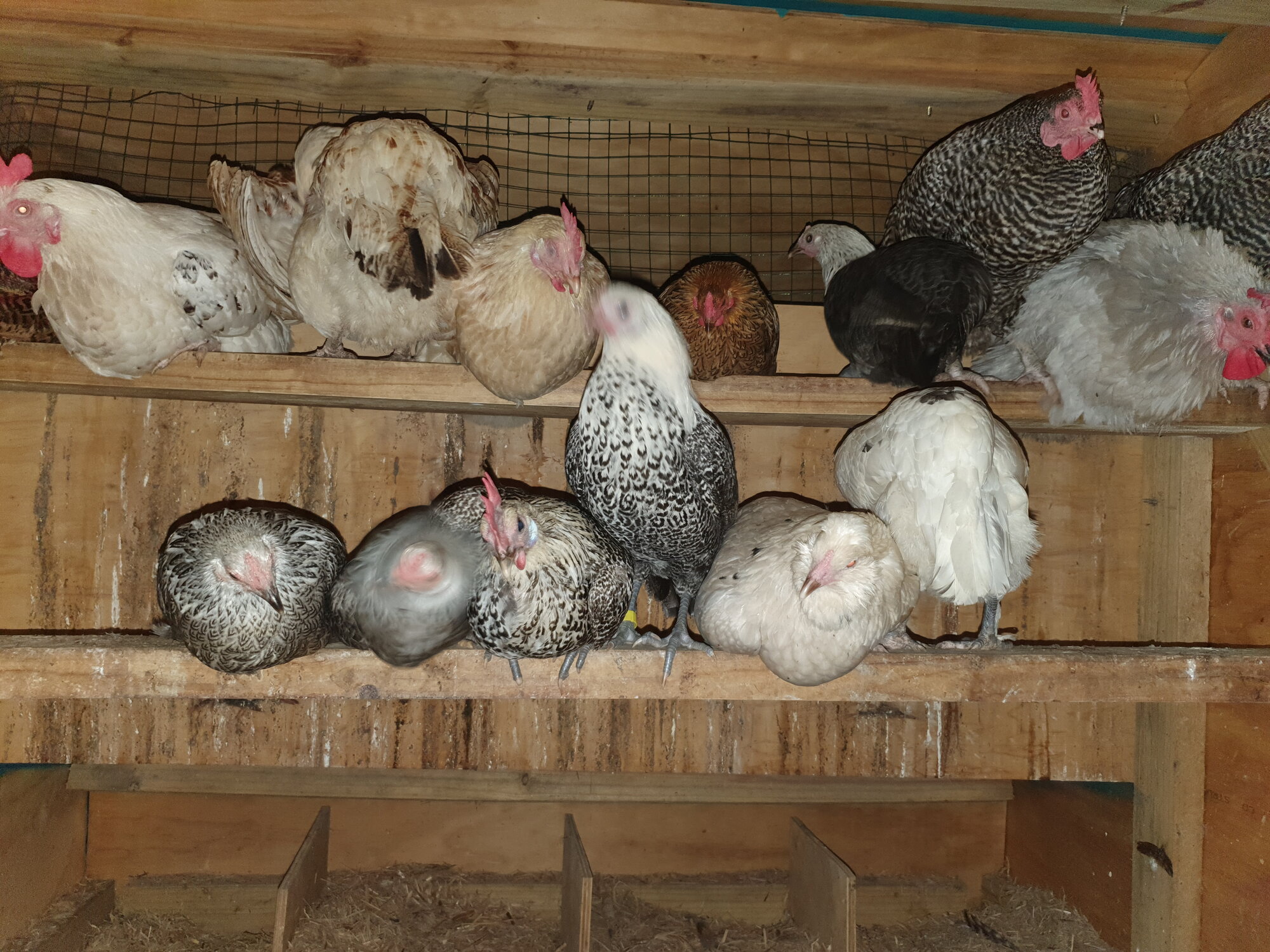 They are snuggled up nice & tight. 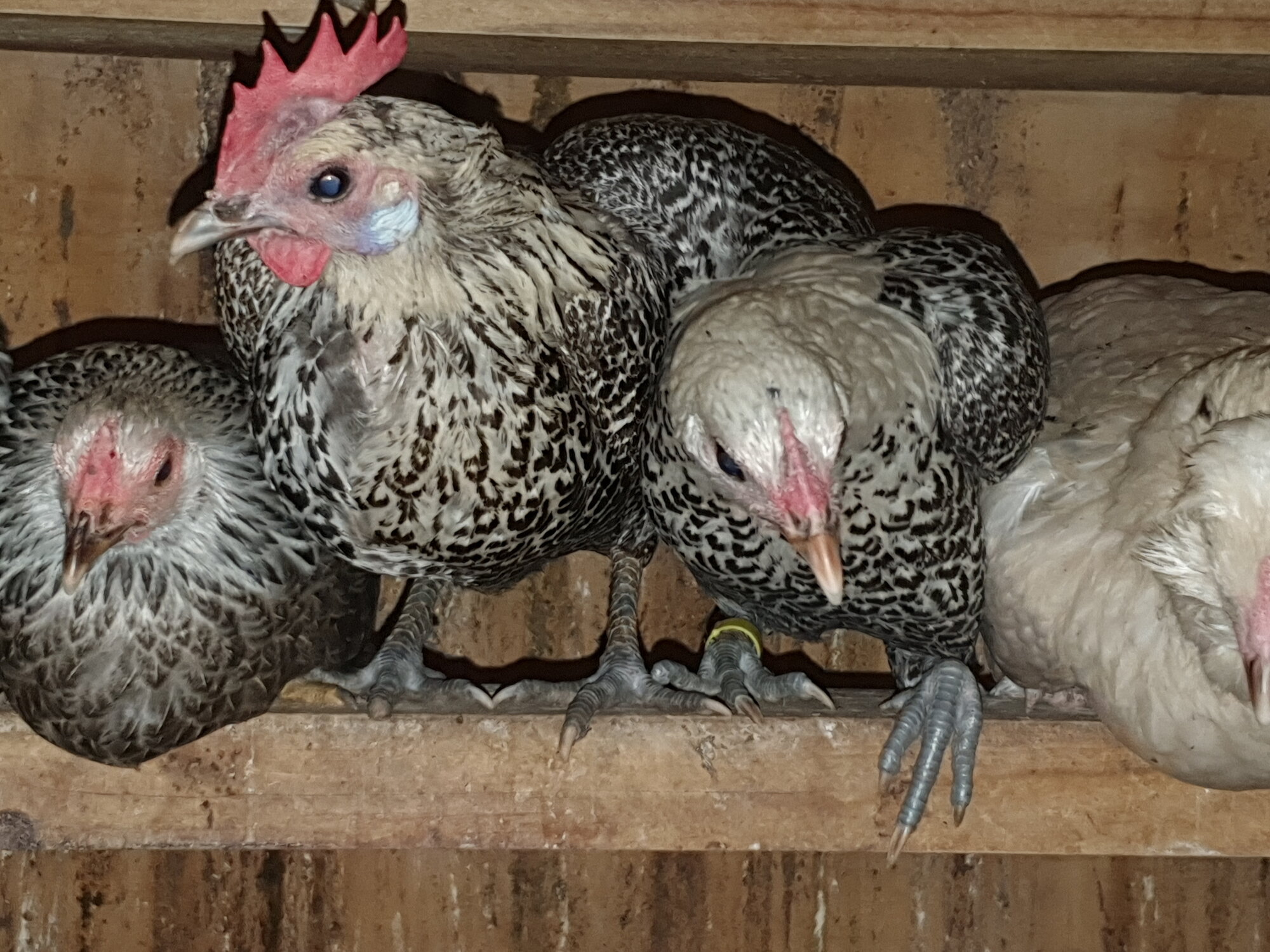 Shadrach said:
Okay. I admit it. They've got me this time.
The three largest eggs are Mel's.
The slightly matt looking egg at the front is Fudge's.
The two light brown eggs are Hurry's.
Now that small dark brown egg means Marans here and there is only one and that is Fat Bird and her eggs, if she lays any at all this year will come late spring early summer and will be large and slightly elongated.
I've had a look under the cooker and there are no Marans pullets hiding underneath.
It's either Tap or Moon. I think it's Moon and she is white basically.

Interesting. I will say White feathering seems to be pretty dominant genetically, based on my sapphire crosses this far. I need to get a decent picture of my Marans/Sapphire (CCLxLH) cockerel for you. He is so gorgeous, Sammy even lets him mate the pullets/hens (granted the hens aren’t really interested and put the little upstart in his place most of the time!)

It looks like one of the campines has a bit of toe missing. Or is it the angle of the photo?

MaryJanet said:
It looks like one of the campines has a bit of toe missing. Or is it the angle of the photo?
Click to expand...

I think it's the angle, MJ. I will double check in the morning.

Shadrach said:
I think it does.

He will also try to make a neck grab on my hand if I give him the opportunity. It took him a while to understand that he didn't have to rip skin off.

I wonder how he worked that out, without you needing skin grafts.

Ribh said:
I think it's the angle, MJ. I will double check in the morning.
Click to expand...

Hope that's all it is

MaryJanet said:
Hope that's all it is

I blew the roost photo up to have a look & her toenail seems shorter but all the toe is there & It it hasn't affected her movement so I'm thinking we're all good.

Ribh said:
@CrazyChookChookLady : I'm going to answer your comment here rather than on MJ's thread because if I'm going to rabbit on I'd best do it on my own thread. I'm going to state a couple of obvious points first because I have heard of tourists who expected to do The Sydney Opera House, The Great Barrier Reef & Uluru all in the same day so: Australia is BIG.

In winter it snows in some places [some places it's been known to do that in summer] so depending on what you want to see you need to plan your time & whether you are going to do your travelling by car, train or plane. That will decide where a lot of your money goes & how long you can stay.

That all said I am going to assume you want to see the country, not do the culture vulture shuffle. Because we are so big every state is different & has a different climate.
Click to expand...

Not exactly dissuading is here.... just means we will have to spend as much time as legally permitted seeing the awesomeness! And I want to see it all (well, except for the spiders...)

rjohns39 said:
Jeannie, you've done a wonderful integration. The girls are doing great. Your assessment of visiting AUS is akin to visiting the states. Where to start and where to go. I've lost all hope of visiting AUS as I would need at least a year to see everything I wanted to.


I'm doing great and love seeing how things are with you.

Bob, I now hate flying, but I don't fly American. Last four flights, well 3 and almost flights I had with them convinced me that I'm not going back. First three, I see structural defects as we're in flight and just pray that we land in one piece. When we landed I told the crew what I saw, quietly and was politely told "that's normal". NO THAT IS NOT NORMAL! I have a degree in aviation and am an aviation maintenance officer. Then for the icing on the cake.... I'm boarding a flight and the captain is greeting the passengers. As he greeted me we went eye to eye.. Yea, the reason he was no longer flying for the US Air Force was because I took his wings. I looked at the head flight attendant and told her to get me on a different flight, same class, same times, etc or I would happily tell the entire passenger contingent why I was not going to get on this bird. She initially pushed back, but the pilot told her to give me what I want. He really didn't want me to share.
Click to expand...

To quote a favorite comedic band re Canada

“The economy is lousy, we barely have an army
But we can still stand proudly 'cause Canada's really big
We're the second largest country on this planet earth
And if Russia keeps on shrinking then soon we'll be first
(As long as we keep Quebec)......

Most people will tell you that France is pretty large
But you can put fourteen France's into this land of ours
(It'd take a lot of work, It'd take a whole lot of work)
We're larger than Malaysia, almost as big as Asia
We're bigger than Australia and it's a continent”
The arrogant worms

Lol, but sadly a lot of that is really cold and tundra-ie. As DH says “we burnt your fries, so we gave you extra”

And as to the whole captain incident etc.... great, you’ve now reassured me that trains are probably safer... but I still don’t think I’m going to take a boat to AUS, even if that was how my mother travelled to Canada.
You must log in or register to reply here.
Share:
Reddit Pinterest Tumblr WhatsApp Email Link