Warning graphic injury pics at bottom of post!
A lot of you know Phillip 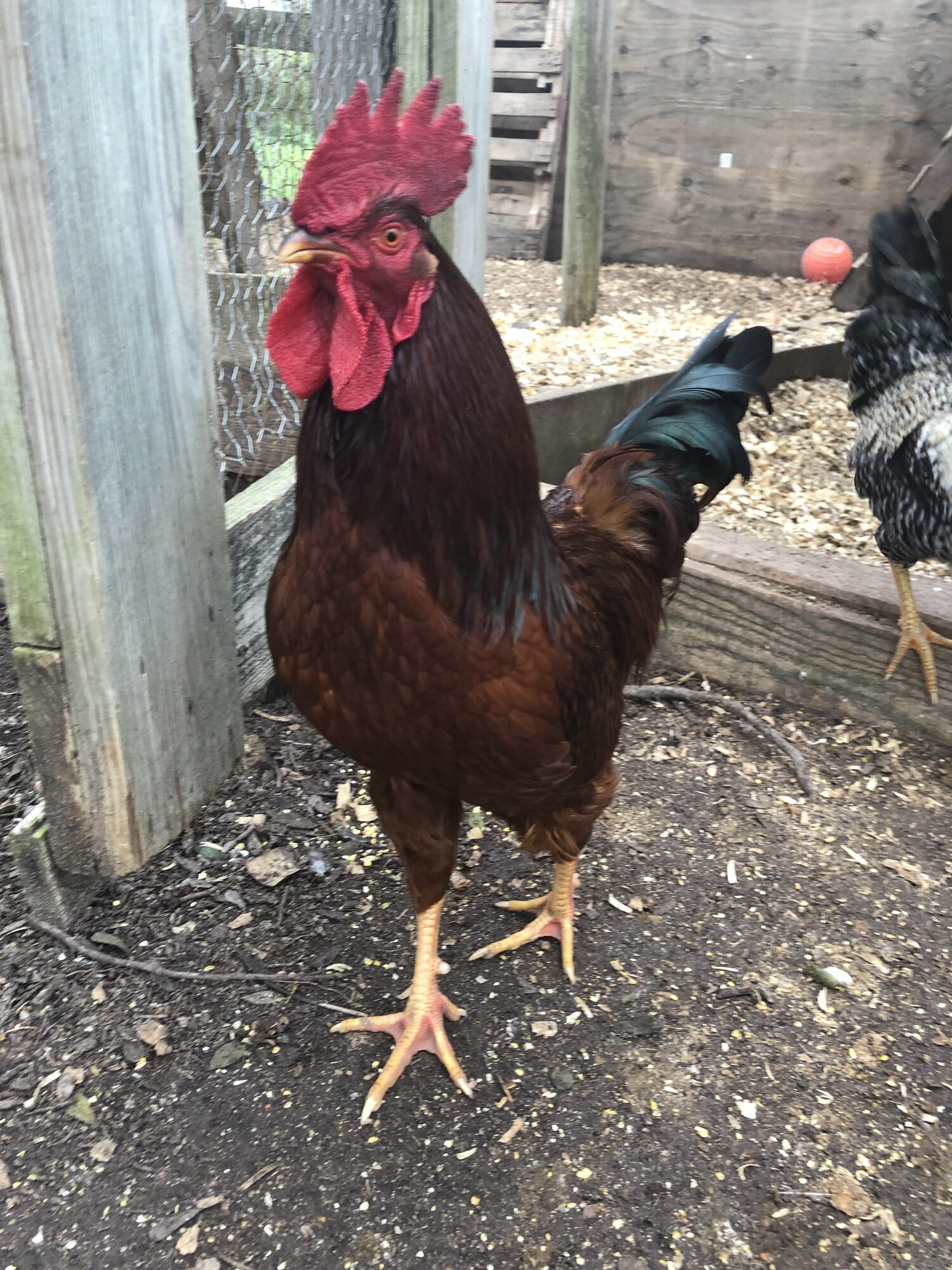 Our 19 month old RIR Roo.
Five days ago he saved some hens during a three dog pack attack on our coop.
He has multiple severe wounds, the worst being his back muscles between wings were ripped clear off.
He lost a lot of blood and fought dog bite infections in his back, both sides, left thigh and a broken left foot.
Luckily no mortal wounds, lots of blood loss and shock.
He's wanting to move around now and while he's healing well the nerve damage is starting to get to him causing bad tremors. I think part of the tremors could be blood loss or even anemia as over load of white cells to fight infection.
He's in a substantial pain and I want to know if I can give him Tylenol for pain. I know it would be just a little bit, but does anyone have an idea how much, how often?
Also any suggestions on helping him deal with tissue and nerve issues?
Have Vetamycin spray and some burn cream left over from when Connor lost half his face.
Connor was a baby and easy to handle.
Phillip is a large RIR (8 lbs) and he's usually happy spurring me if I startle him, but is now following me room to room and begging to be cuddled.
Not the cuddles type bird...but he cries and grumbles when I put him down.
He will go to his box when he is ready for sleep on his own.
Any advice on pain assistance for this large macho Man?
Thanks in advance. 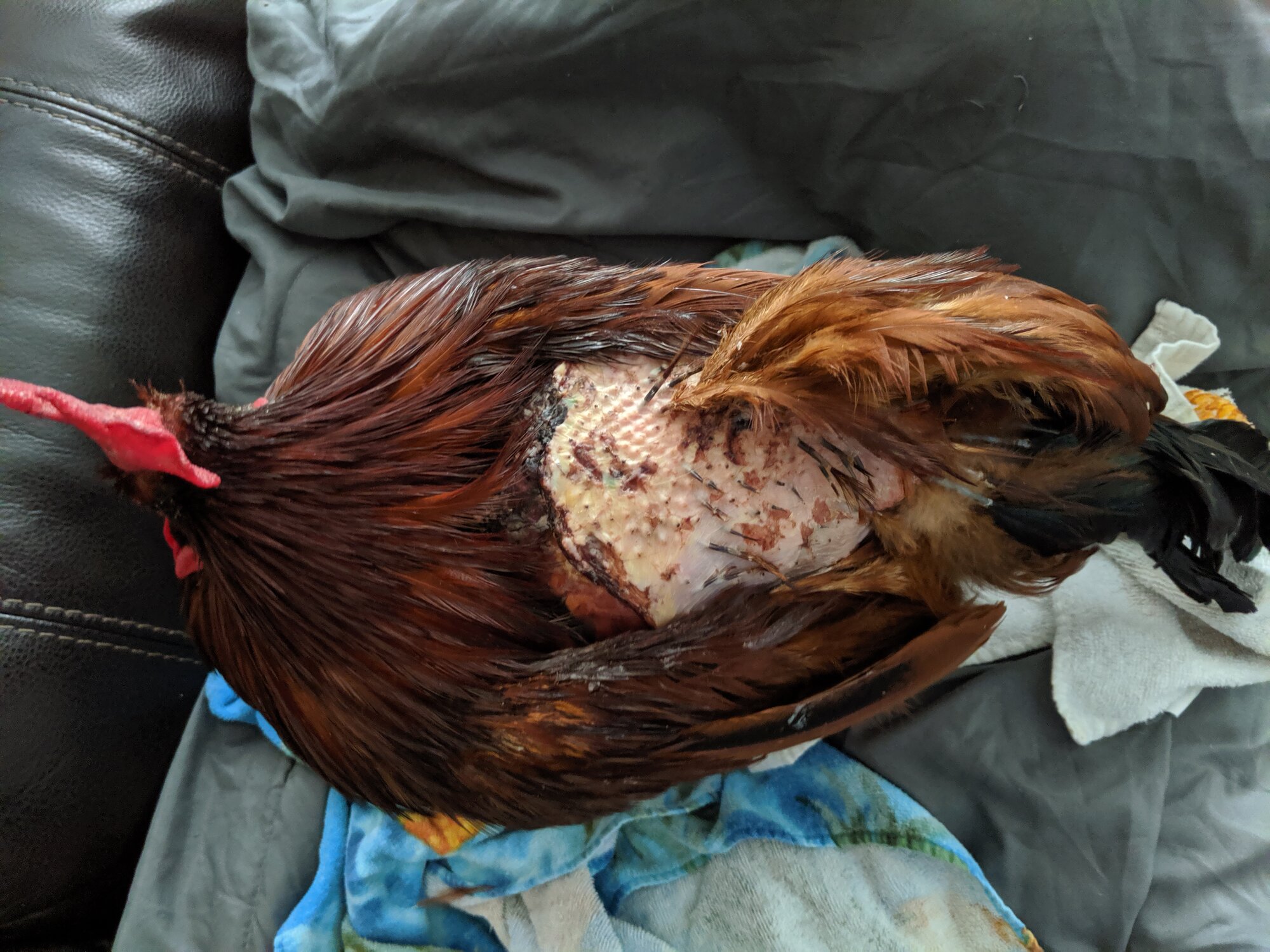 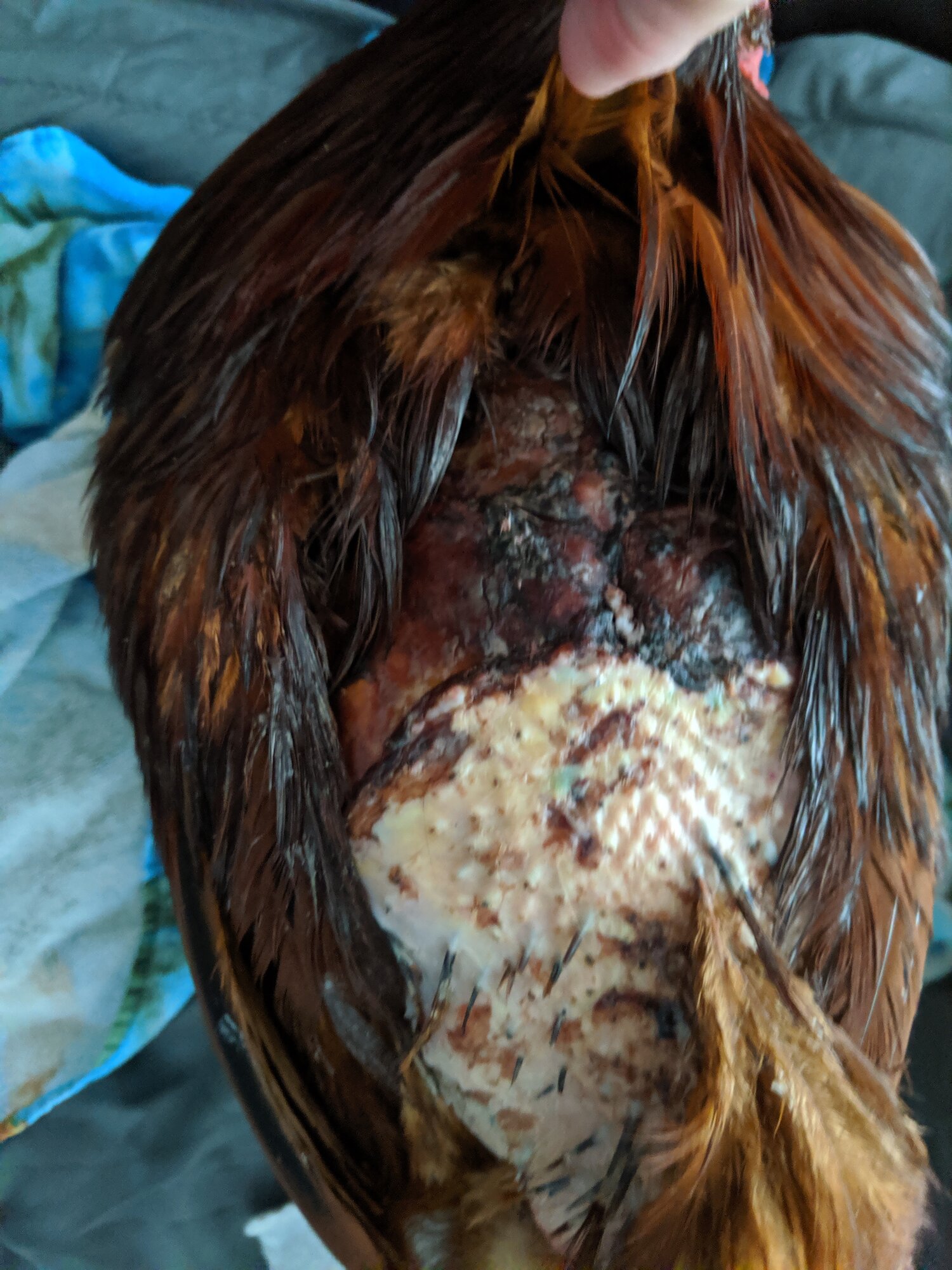 He still has skin under his wings, but it's cut up on both sides.
Day two he was turning green, but we use Neosporin with Vetmyacin spray and the tissues are looking healthy now.
Prayers for Phillip's health and strength please. 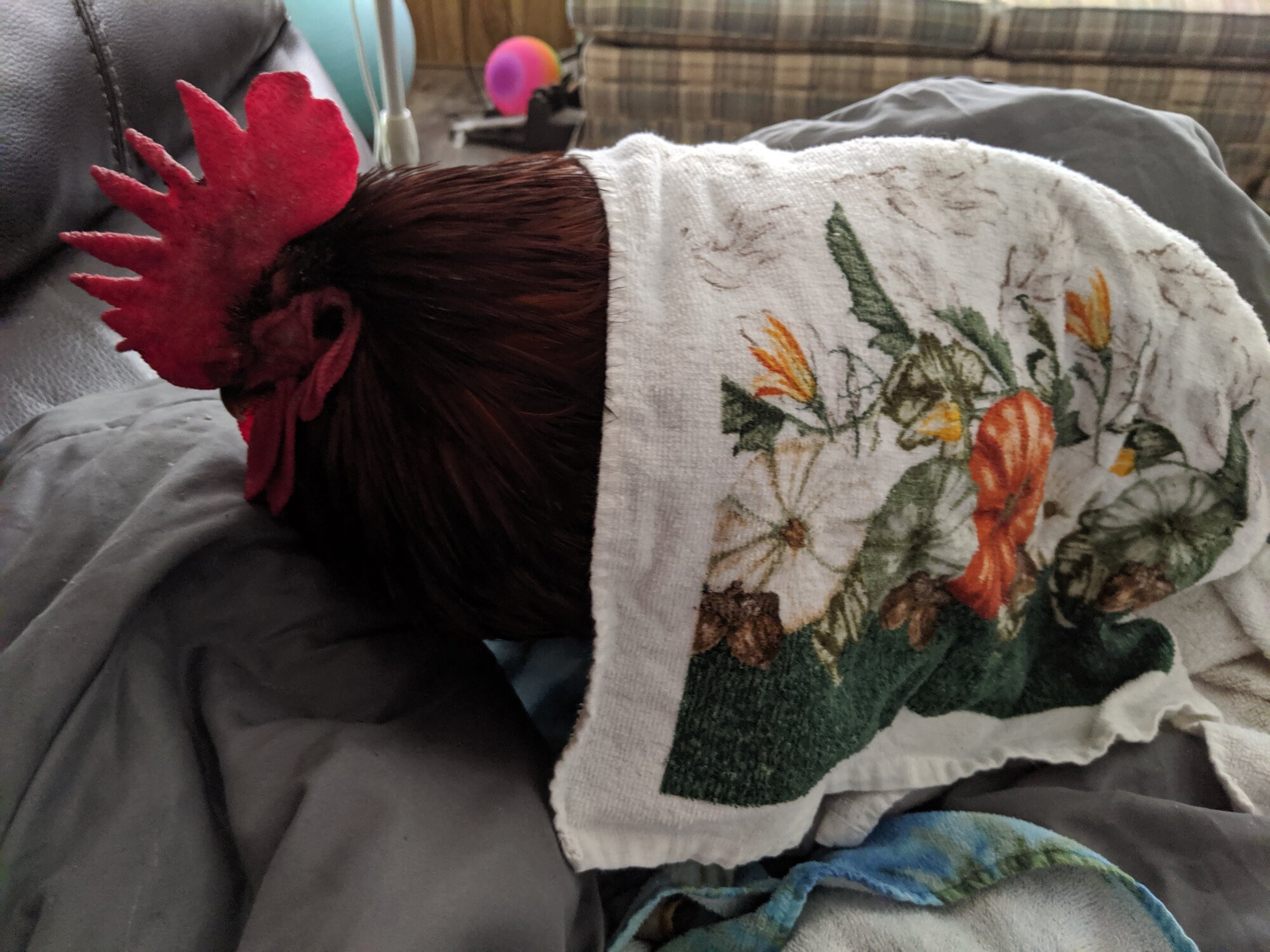 I sure hope Phillip gets better...

Ted_Harrell said:
I sure hope Phillip gets better...
Click to expand...

Thank you. He's slowly healing. It's going to be a long hard road.

I had a dog when I was a kid that ran out in the road and car was coming. The dog missed both tires but was a little tall to make it under the oil pan. She lived and healed up. We changed her name to Lucky and she lived with us until she died.

Also, Clyde(sdale) got drug into side Pasture and after five days of laying low he will peak up through tall grass at us but won't come home yet.
Any suggestions on coaxing him home?
He won't leave pasture and I unprotected out there. 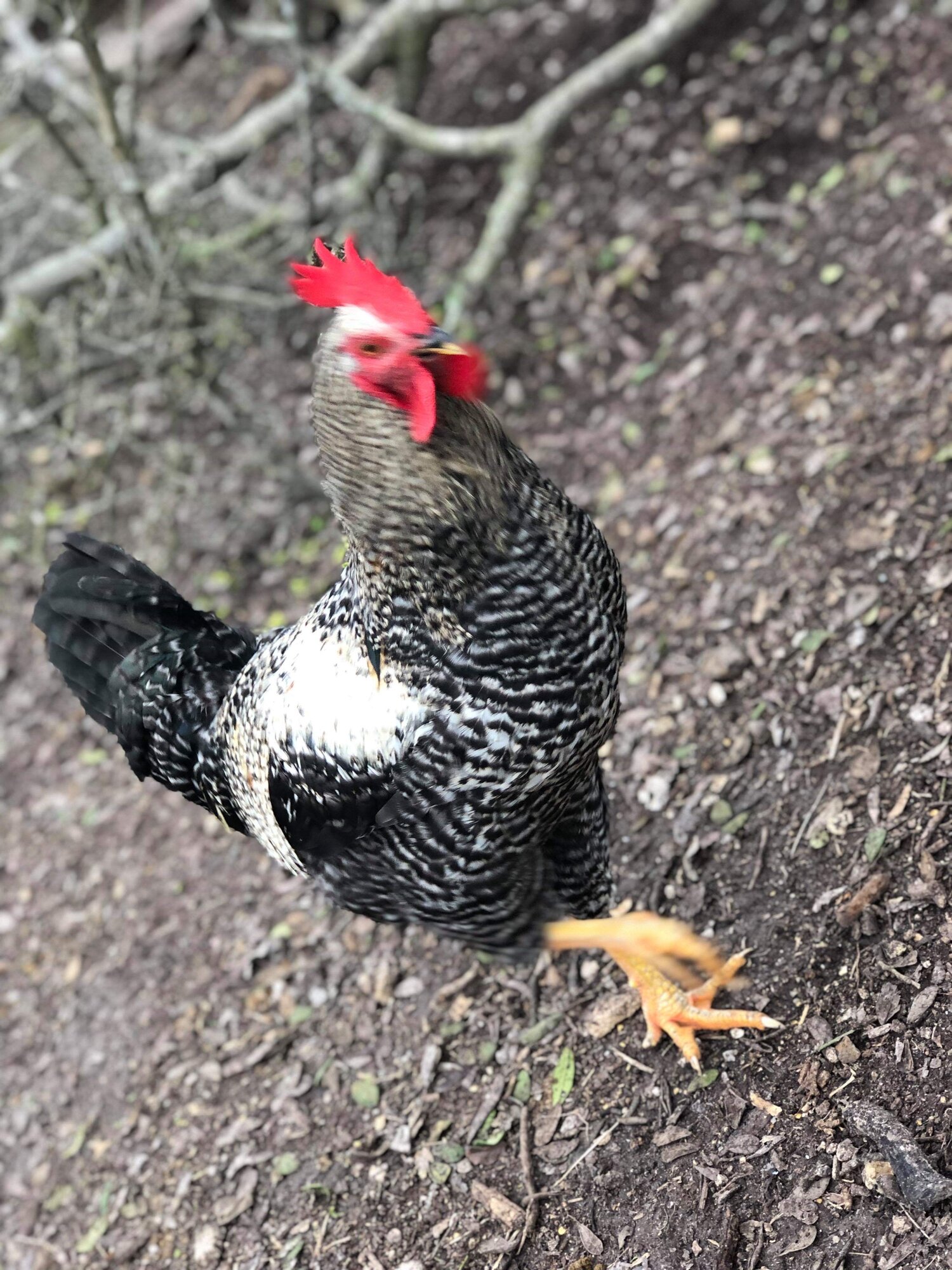 He's a huge boy (9lbs) but a little soft hearted.

I guess Clyde can't un-see what he saw, bless his heart...

Ted_Harrell said:
I guess Clyde can't un-see what he saw, bless his heart...
Click to expand...

We lost five hens in that attack. The next morning the dogs were back and broke into our broody house and killed three pullets.
We've been keeping watch with a shot gun each night since.

If there's a vet close to you, I would get a systemic (not topical) antibiotic and a painreliever like Meloxicam. If you can't afford a vet visit, a lot of farm animal vets are pretty good at giving out limited prescriptions for livestock...especially if they know you. I'm glad he is surviving. For Clyde--have you tried putting a big dog crate out where he is with special treats and food inside? I would put a small branch inside the crate so he feels really safe. Then you just try and sneak up on it and close the door.

Please dear God take him to see a vet. He will die otherwise. There are lots of vets who see chickens - http://www.poultrydvm.com/poultry-vets.php
You must log in or register to reply here.
Share:
Reddit Pinterest Tumblr WhatsApp Email Link