This is Cybil, she has a slightly stumped top beak when I got her. She is growing leaps and bounds but her beak remains shorter on the top, and her nostrils are closed. Has anyone ever had this before? She seems healthy otherwise and eats like a little pig, and chews grass by grasping it in the corner of her mouth. She does seem to have problems drinking as she has to gulp it down and breath through her mouth......
Last edited: Jun 17, 2009

The one thing I can foresee as being a problem with her is that she won't be able to normally wash out her face like other waterfowl using her nostrils. That might cause eye problems and what not down the road, respiratory illnesses.

With her, especially when older, I'd just make sure she always has clean water in which to dunk her entire head. They should have that anyway, but for her it will be especially important to get the water into her eyes.

It may be that she has sinus deformities because of the region of her deformity. But of course, I'm a sucker for special babies, and I'd probably just raise her and since it's from birth see if she even ever notices that she's different!

I had an adult goose who had a major deformity (or scarring from a wound) of his bottom beak. I bought him that way. He couldn't graze, but he was able to eat grains if I made sure that they were really deep in the pan. He died to a predator, not beak problems. Geese are tremendously resilient, so who knows.

I just wouldn't breed her.

My pilgrim girl has a deformed beak. Her nostrils are clear, though, so I don't know what problems the closed nostrils will cause.

Ethel eats and drinks fine, she doesn't realize she is different. She also grazes by pulling grass from the side rather than the front of her beak/bill. 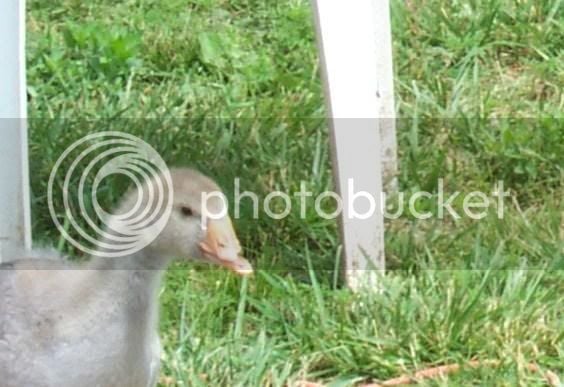 With your girl I would just keep an eye on the nostril problem - otherwise, she'll probably adapt just fine as Ethel has done.

Swelling around the beak