Should I add geese to my flock?

Someone I know is looking for a new home for a young pair of Embden geese. I am considering adding them to my flock, please help me decide.

I have about 60 laying hens, 6 roosters, 3 guinea hens, 5 Khaki Campbell ducks, and 45 teenage chicks being raised to show & sell in Jan's county fair. How well do you think a pair of geese would get along with this flock?

I went to see them & they were just aloof, not friendly nor aggressive. How should I facilitate their introduction to the yard and accustom them to a new home?

I thought I could clip their wings & keep them in a small enclosure for a while (how long?) until they seemed reoriented to their new home. Then I would let them free-range during the day like my ducks & guineas do, and keep them penned in at night. Could they share the ducks' kiddy pool, or should I give them their own?

Please help me decide whether or not to try this, and if so, what better plans I should make to accomodate them.

I raised my ducks and geese together from the day they were shipped to me and have had no problem between them, (I have white chinese, African and Toulouse.) I pen them in at night with the ducks and have no problem with them getting along. They put up with my chickens just fine and make a rucus if my dog comes around, but don't bother her unless she gets too close. I think it would be important to give them a little space of their own while they adjust to the rest of the birds, and learn where home is. They'll be the biggest birds in the yard, so I don't imagine it will be hard for them to establish that they are the bosses, so they shouldn't get picked on too much.

My geese send up a call any time anyone approaches their enclosure, people/human, but I think they are the reason I haven't lost any of my chickens or ducks to predators yet because they scare off the mid-sized threats, and the coyotes and cougars don't bother trying to get into the run over the six-foot fences. If you have close neighbors, you may want to feel them out about the birds. Mine make noise all night if an animal runs by, and always greet me the moment I step out my back door.

On the other hand, I like my geese and I think Embdens are supposed to be calmer and less bossy than Chinese, so you may end up with a great mix. My geese share the same pond as the ducks, and other than the gander trying to mate with any waterbird in sight (regardless or gender or species) we've had no problems. Also, they're heavy enough, they don't do much int he way of flying. With a running start mine got up three or four feet off the ground for a twenty-foot stretch a number of times last year while they were still juvies, but that stopped before this spring--I think they just got too heavy for serious flight (serious being what I just described, of course.

I'd think four -eight days sufficient for them to know where home is, and get them familiar with scratch or some other treat right off and they'll go right into their pen with little complaint at night. They herd waaaay easier than chickens. lol

i too think they're good for giving calls of warning. they will dominate the chickens and eat first so i just have food in a couple areas. i like having geese.

i have one goose. it hangs out with my six ducks and plays cop. i was gonna eat it but my hubby said the ducks would miss it. my chickens run around with them but not exactly together, just near them. the goose is a great guard bird. i would do it. i'm hopefully getting a few more geese next weekend.

I do not advocate mixing fowl in pens.

I have flocks of geese, ducks, chickens, guinea, turkeys. They thrive best when with their own kind and not fighting for food or dominance with other birds. They don't live together in packs or flocks in nature and I don't expect them or force them to live that way on my little farm.

Geese love water. Not as much as ducks but love it none the less.

They do best when allowed to graze. They are herbivores and don't eat bugs and other insects. They eat like cattle and tend themselves very well when they learn their home and their bounderies.

wow. who was going to force the geese to live without water?

"Could they share the ducks' kiddy pool, or should I give them their own?"

maybe that part was overlooked.

Yes. You must get geese.

Embdens can be loud and aggressive toward strangers, but if they were fine when you saw them then those two may be more laid back.

Embdens can't fly, so you don't have to worry about clipping their wings. If they do decide to flip out and flap their wings at you, clipping them also won't help - geese have actual bone spurs they punch you with - not their feathers

You can become friends in a week or two by offering them treats. They are ruled by their stomachs and once they realize you deliver tasty snacks they will come running when they see you. They probably won't become tame enough to let you pet them, but you can at least get them to tolerate being picked up.

We keep some of our geese in with our chickens, turkeys, etc. They get along fine with the other birds but need to be trained to go inside a building at night. Even our geese will sometimes go inside at night and sometimes they won't. We haven't picked up a pattern as to why they do that, they just do. For example, for the past four nights three older goslings slept out on the field on the first night and had to be carried into their house, went inside on their own the night after, slept _behind_ their house the night before and went inside last night.

If you have adults they can eat regular chicken feed without a problem. Stay away from feed with protein higher than 16-18% since it can help bring about angel wing. Egg laying pellets work fine, and we've been feeding ours sweet cattle feed since it isn't laying season. They go crazy for it.

They don't need a pond but do like to get into water to wash off, regardless of how cold it is, plus need to at least be able to dip their face in water to clean out their bill. Expect the water to be a huge mess. If you want, don't put any water in their house at night and just let them drink during the day. Geese have a low tolerence for boredom and will sometimes spend the whole night playing in their water, among other things.

I personally run a mixed flock..... everything freeranges during non breeding season ( everyone has own pen during that time of yr) They share a small man made pond and love it. The geese ,ducks,chickens and turkeys all get along very well and there is little to no fighting between the species in fact the chickens argue the most with one another but the geese are the protectors of everyone... Every one is thriving and doing well and are happy !!!! I couldn't beleve the number of setting girls I had this yr.
NOW...... I Think this is a major factor in the sucess of my set up is that the night pen is huge about an acre and there a places for smaller birds to hide if they feel the need.
My big flock is made up of 7 smaller flocks that will break off and go off and do things away from the others and its intresting to watch due to the runners like only runners but the calls hang with the geese and I even have one call duck that runs with a group of chickens ( she sneaks off to take a swim though) But..... if they feel threatend they will come from all over and make the big flock and stand as one group of birds.
Allie 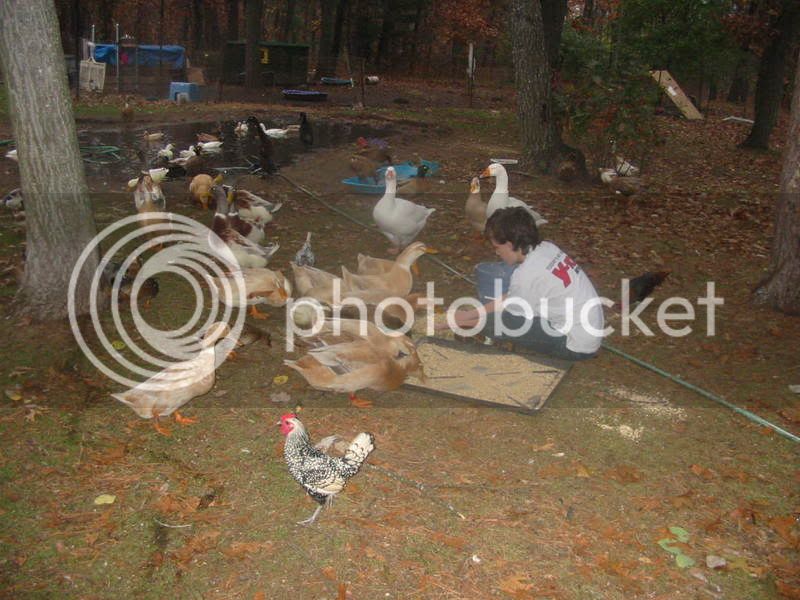 While all mine free range together, they go to bed in separate pens (chickens & guines together but the ducks and geese have their own pens). The geese tend to boss everyone else and it gives the ducks a break.

what a great picture to wake up to.

H
Adding trio to my 1 gander

Four Lovely Geese To A Good Home In Virginia
2