Something is chewing on my chickens neck...

Eggcessive said:
You can flush the wound once with 1/2 strength hydrogen peroxide, which would get down into the wound and fizz anything out. Clean off with tissue or paper towel. Don’t use the peroxide after that since it can damage tissue.
Click to expand...

Not a good idea. Peroxide has been discontinued as a recommended agent in first aid. Sterile saline in a pressurized can is better if a wound needs flushing because if you introduce peroxide to a deep wound, you can’t get it all back out.., you can find very cheap at the drugstore and have cans of sterile pressurized saline in the kit..

”for clean wounds, large wounds, or deep cuts, it’s better to avoid hydrogen peroxide, and instead either use an antibiotic ointment, or forgo the antibiotic and focus on simply keeping the wound covered and clean.”

Here’s another source on Hydrogen Peroxide..


How often should hydrogen peroxide be used to treat wounds?​

Hydrogen peroxide should never be used to treat wounds as it does more harm than good. In fact, no antiseptic should be used to treat wounds. While highly reactive chemical agents such as hydrogen peroxide do indeed kill some bacteria, they do more damage to healthy cells that are attempting to heal the wound. This fact has been known to mainstream science for almost 100 years. During World War I, military doctors followed medical folklore and treated soldiers' wounds with antiseptics, and yet the soldiers still died from infection at an alarming rate. Biologist Alexander Fleming approached the issue scientifically. According to the biography of Fleming written by Beverly Birch, Fleming discovered that those whose wounds were treated with antiseptics had higher death rates and slower healing times than those whose wounds were not treated at all. Surprised by this finding, Fleming conducted a controlled laboratory experiment that confirmed that antiseptics are harmful. In the years that followed World War I, scientists engaged in a hunt for a treatment that would kill the infectious bacteria without harming the patient's healthy cells or natural immune system. A decade after World War I had ended, Alexander Fleming discovered that Penicillin, a juice excreted by mold, selectively kills bacteria. Through the work of Fleming and other scientists, Penicillin was developed into a powerful medical treatment. The age of modern antibiotics had been launched. Because antibiotics kill bacteria without harming the body's cells, they can be taken internally and reach the bacteria below the skin's surface. Thus antibiotics proved useful in not only treating surface wounds, but also cured internal diseases caused by bacteria such as strep throat, syphilis, gangrege, and tuberculosis.

I got a couple of photos, but you can't really tell how deep it is. 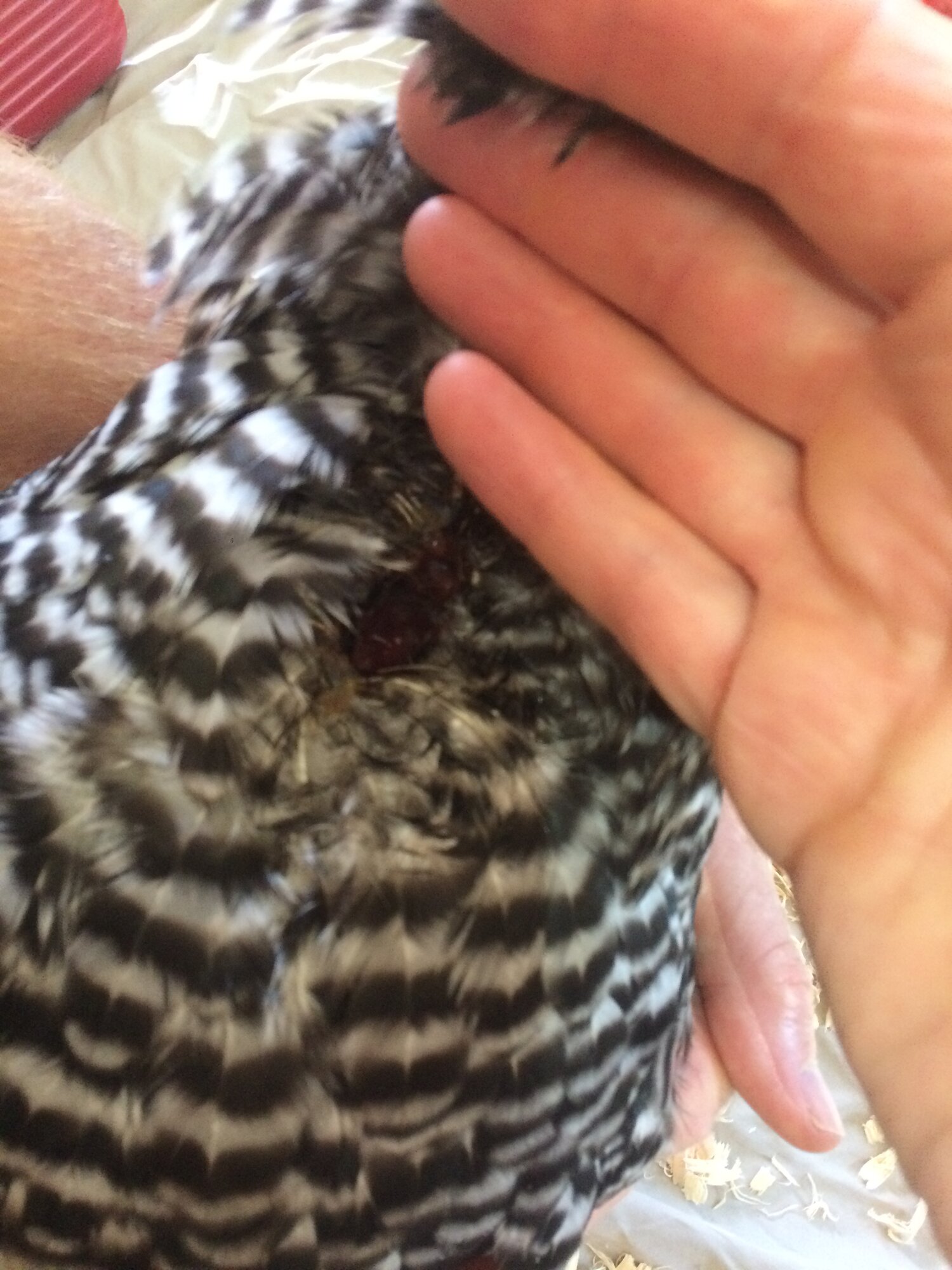 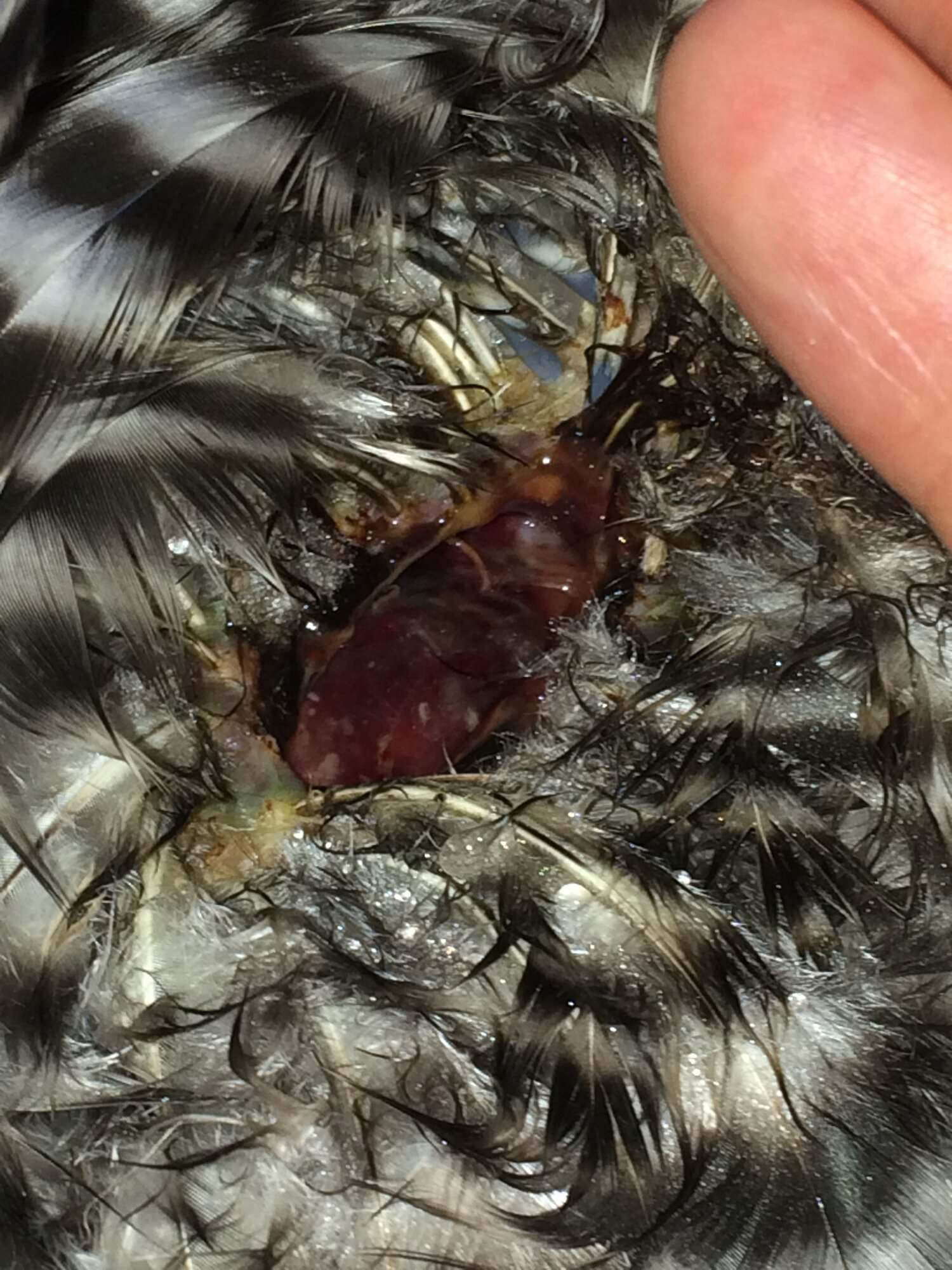 You can make your own saline wound wash..this is from Gail Damerow’s book..

We have vetericyn and are spraying it regularly to keep it clean. Any ideas on what could have done this?

fernv said:
We have vetericyn and are spraying it regularly to keep it clean. Any ideas on what could have done this?
Click to expand...

No..not without seeing it in person, even then..do you think this was one violent attack or puncture, or could it be something that started small and grew over time? A wound that deep..I wonder if packing is necessary..I’d think antibiotics for sure if it’s deep..I haven’t read back on the post, but, any plans to visit a vet?

fernv said:
We have vetericyn and are spraying it regularly to keep it clean. Any ideas on what could have done this?
Click to expand...

Is there any piece of anything sharp she could have done it on? Pleease look around the chickens area and coop ?

penny1960 said:
Is there any piece of anything sharp she could have done it on? Pleease look around the chickens area and coop ?
Click to expand...

One of my sweet Speckled Sussex had a cracked beak, I couldn’t figure out how she got it..I determined it must be the stupid swing I made out of a heavy 2 by 4, which I then switched to a very light fiberglass hoe handle. It must have swung back when another jumped off and hit her in the face..I ended up using the Bondic UV pen to seal and repair the beak..injuries are tough in animals we are not with 24/7..
Q 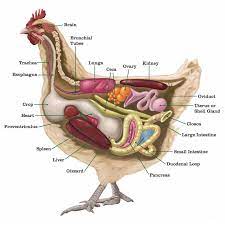 Where in this diagram would you say is the wound located?

No plans to go to the vet at this point. I'm not sure any local vets work with chickens and she is very content inside for now - eating, drinking, pooping, grooming.
Should we start antibiotics even if she seems to be doing good and we regularly spray with vetericyn? Or should we wait a bit and see?
I don't think there could be anything sharp, but we'll double check. She has been spending all her days in our garden, which is a pretty safe space. She comes in first thing in the morning and doesn't go back out until bedtime.