Just this past weekend our young (5mo) Tom found his gobble. His strutting and spitting button has also turned on big time. The wierdest thing is that he has started throwing temper tantrums if he doesn't get his way.

For example; it was time for him and our female to go in their cage. Normally they will follow us or we can coax them in by walking with them or behind them. The past two times he has been asked to go in his cage he's refused.

We picked him up, all 35 lbs of him, and put him inside the coop and closed the door. He then got all skinny, with his head and neck stretched out as tall as he could, he pointed his wings down to the ground and stomped them down at the same time he stomped his feet. He wasn't flapping his wings, he was pounding them into the ground as he stomped one foot at a time. He doesn't make any noises, just stomps like a 2 year old child.

The first time he did this we were surprised, as we'd never seen a turkey temper tantrum. The second time he tried it, it was hard not to laugh at him.

Tonight when it was time for them to go to bed, he tried it again, but we told him to knock it off, so it only lasted about 10 seconds.

Is our turkey wierd or is this temper tantrum behavior something that comes along with growing into his big boy Tom-self?

He has also started to not like our daughter's pink bike and blue helmet, the weed wacker, the power washer, the trash can. He puffs up and chest butts them.

He has been very friendly all along, but this new behavior has my husband thinking that "Big Guy" might go from family pet to the dinner table if he becomes agressive towards people.

So is Big Guy just feeling his oats or what? 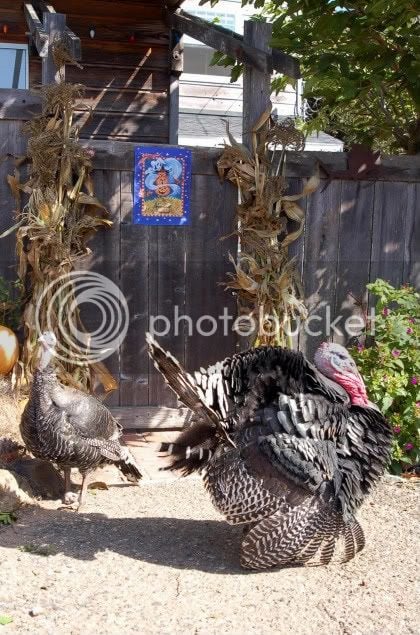 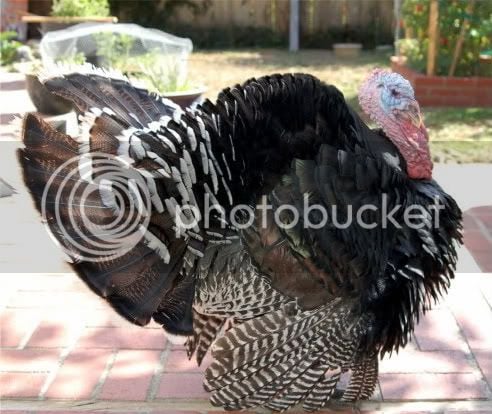 "We picked him up, all 35 lbs of him, and put him inside the coop and closed the door. He then got all skinny, with his head and neck stretched out as tall as he could, he pointed his wings down to the ground and stomped them down at the same time he stomped his feet. He wasn't flapping his wings, he was pounding them into the ground as he stomped one foot at a time. He doesn't make any noises, just stomps like a 2 year old child."

It could be a couple of things:

He wants to mate with you.
The stomping of the feet and shuffling of there feet, is sometimes part of the mating ritual. It's also part of the challenge for pecking order.


As for as those items: if they are all blue it's because he wants to mate with them. Females have blueish faces when excited.

We had One Red Bourbon that was the same way when ever I wore blue or blueish gray tennis shoes. It got so bad that if you sat down and stretched your legs out he would try to mount the blue objects.

I no long where blue or red around Tom's.

I've noticed that too w/ my 3 BR Toms. If I'm wearing blue or red, they stay puffed up. Never aggressive toward me, but I watch them. Also, if my turks are bugging me, I hold the blue manure rake. They leave me alone.

It's not a tantrum, it's part of the mating dance.

The Bronze toms don't seem to be as wary as other varietes, when i'm in their area ours will come and circle me strutting and drumming. If you are down at their level sometimes you have to wonder about them.... please don't grab an ear or my nose. lol Whenever I reach out to touch them they will take a step or 2 back but keep strutting. I don't take it as any sign of aggression, with birds that size keep an eye on them. Last Saturday we were working on their range roost and two of the older toms started fighting, you could hear a solid thump when they kicked each other. They are cool birds though, our oldest ones are maybe 16 months old now and I love all the colors in their feathers when they are in the sunlight.

That is the natural maturing process of a tom turkey. Also it's why people warn not to "tame" toms too much or you'll have to deal with a 35-pound turkey wanting to sit in your lap, or in your case, getting mad or wanting to sow his oats.

This behavior is not changeable, in general. I would just do everything to not encourage it -- which to me means not getting into power struggles with him.

At his age, he may get a bit feisty with young kids, so I'd be careful about letting a very young child near him. My young toms are very feisty, but once they get over a year, I find they calm down a lot. I ignore mine as much as possible, so as to keep him focused on turkeys and not on humans.
Last edited: Oct 6, 2009

Thank you everyone for your input. It is most appreciated. We will try to ignore the Big Guy as much as possible, but he won't have a choice when it comes time to go to bed.

He is not a lap sitter, thank goodness!