The bantams have gone insane!

Today, I was out in the chicken yard, spreading some cereal for the girls to peck at while they moped in the snow, when I heard the familiar sound of little wings, buzzing furiously away. Amy, one of my golden Sebrights, flew out of the coop, about 12 feet in the air above my head, and landed in a tree not far from where I was spreading the cereal. Of course, I ran in for my camera. 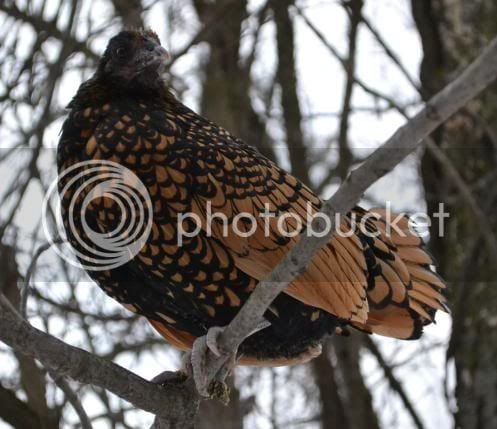 She looked around for a bit, then noticed me there, creeping closer for a better shot. 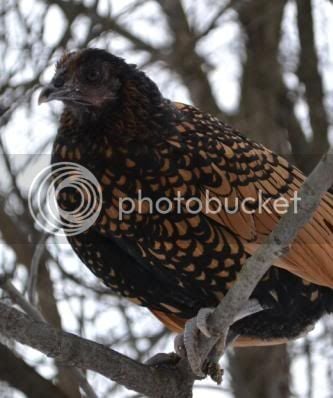 
In case you wondered, she was pretty high up. She was above my head, but within arm's reach. 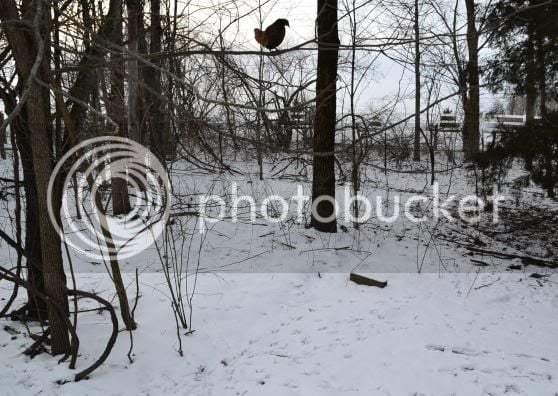 (About the bottom of the picture is right beneath her.)

Long story short, she eventually flew down to join the ground-dwelling birds.


This evening, as I was putting the ladies to bed and taking roll call, I found a few to be missing. Of course, Rose (another goldie Sebright) and Betty (one of the Easter-egger pullets) had chosen to roost in the nest boxes. Like they have for THREE NIGHTS IN A ROW.

But anyway, even with them found, I realized I was one short. With as much flying as has been going on, my first thought was to look up in the rafters of our little coop. Guess what I found? 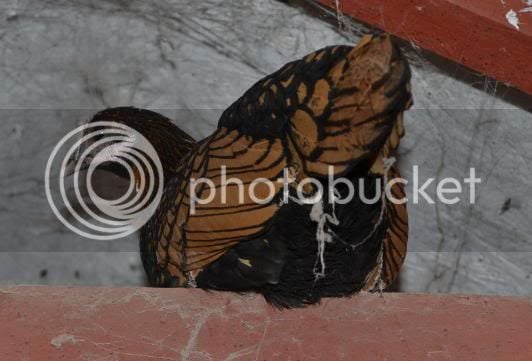 
The flash on the camera dazed her a bit. 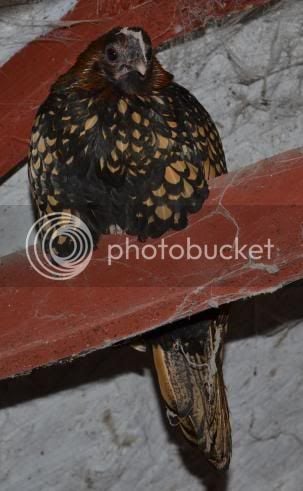 But she returned to her usual spitfire attitude when she realized what was up. 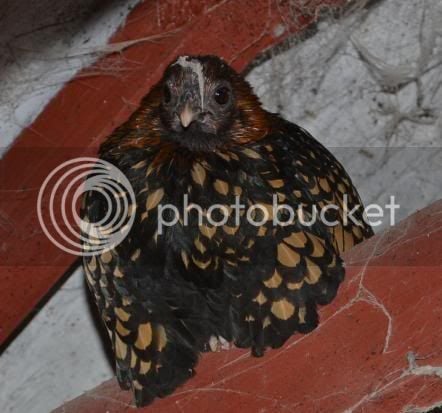 'Will you put that thing away and let me sleep?!' 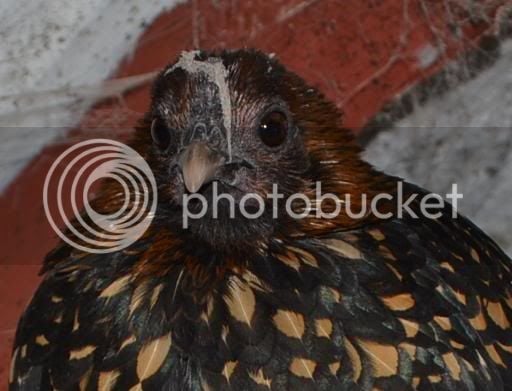 I couldn't reach anything but the tips of her tail feathers, so I left her. She seemed content there, after all.


There are numerous occassions that I haven't gotten pictures for as well. Scooter, one of the silver Sebright girls, flew about 25 feet from the coop to the cedar tree, just to avoid walking through the snow. Rosie has taken an attitude about it all. I frequently see her with her wings out, her neck fluffed, and her tail fanned, attempting to fight some of the barred rock pullets. I think little silver Sebright, Frankie, is the only one that has maintained her sanity. We'll see how long that lasts...
In the mean time, though... THE BANTAMS HAVE GONE INSANE!

and wearing a cobweb to boot!

there is just something about those banties, when i let mine out i have a nn girl and cochin that love to fly.... they go distance rather than height though....

lol the first day i brought my RIR home she flew up into a pine tree! so i named her amelia

The pics of the dust and her are GREAT!

Seabrights so far have been the best fliers ever... I had one but lost her because she flew over the fence to dogs...

The cobwebs are too much. That's the cutest thing I've seen all day (except my turkey, of course

Alice, my little Silver Sebright hen, was the first to begin roosting in the rafters of the coop (which used to be a garage). Now two other bantam breeds AND two white leghorn gals have decided that's the perfect place to roost at night, too.

I wish I had more Sebright hens.

Quote:
Same here but they are not that common to find for sale around here :-(

They are so pretty though and have so much 'tude.