The Most Adventurous Chicken I’ve Ever Met 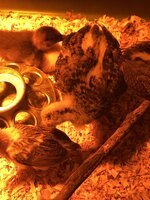 This is Daniel Ray, a gamefowl of sorts that I impulsively bought from a shady guy in a parking lot somewhere.

Anyways, D. Ray, as we call him, has been through some pretty crazy chicken adventures.

He, as well as his chicken sister and duck brothers escaped— and he was the only one who could be recovered.
He was put back to into his cage, alone, to be cared for— only to be lost again.
He was chased out of the bushes by the cat; caught, put back into his cage INSIDE, along with a few new brothers and sisters.

D. Ray is still inside now, safe, warm, and fed.

Adventures of the Chickens who think they're Ducklings