Topic of the Week - Frostbite, prevention and treatment - Graphic images in thread

Pic by @FireHazard
​
In wet and very cold winters, frostbite can affect poultry's combs, wattles, or feet, often resulting in loss of affected areas. Prevention of this condition can be as simple as providing the correct environment for our flocks to stay in. But what if the damage is done already?

This week I'd like to hear you all's thoughts on preventing and treating frostbite. What do you do?

For a complete list of our Topic of the Week threads, see here: https://www.backyardchickens.com/a/topic-of-the-week-thread-archive

*Warning for those with weak stomachs—graphic images ahead*

I live pretty far north, where frostbite is constantly lurking around the corner. The best thing you can do to prevent it is open up the coop. Yep, seems counterintuitive but nothing else is going to work. For temperatures in the neighbourhood of -40*C or below you might want to close up some more to keep drafts away from your birds, but DON'T seal the coop up! I can repeat that if needed to drill it into your brain... lol. Humidity is your enemy here.

If I have single combed roosters, they are going to get frostbite. No way around it, I refuse to bring 10 roosters in the house all winter and heating just doesn't work for my situation. If you have valuable showbirds then the insane electricity bill might be worth it but for a regular backyarder it just plain isn't. Having foresight and choosing breeds with combs better for your climate will go a long ways towards reducing headache that comes with monitoring frostbit cockerels. I am switching over to just Chanteclers and Ameraucanas.

A side note: dubbing might be useful in preventing it. I am not well-versed enough to safely attempt it but if you can find a mentor it's certainly a viable option.

As for what I do with "treating it"—I don't. Thawing and maybe saving some of the comb/wattles just means he gets to go through it again. Unless there is excess swelling, like if the wattles are affected, I leave the bird outside. I have never had one die from it yet. If there is swelling, I'll bring the bird inside for a bit and monitor for infection until it goes down a bit, then he goes back outside. Next year he'll be fine and shouldn't get frostbite again.

I don't have many pictures of roosters with frostbite because my camera stays inside in winter. I did find this one, though, of a cockerel that was almost done healing from frostbite. There's only a little chunk left of the frostbit parts. 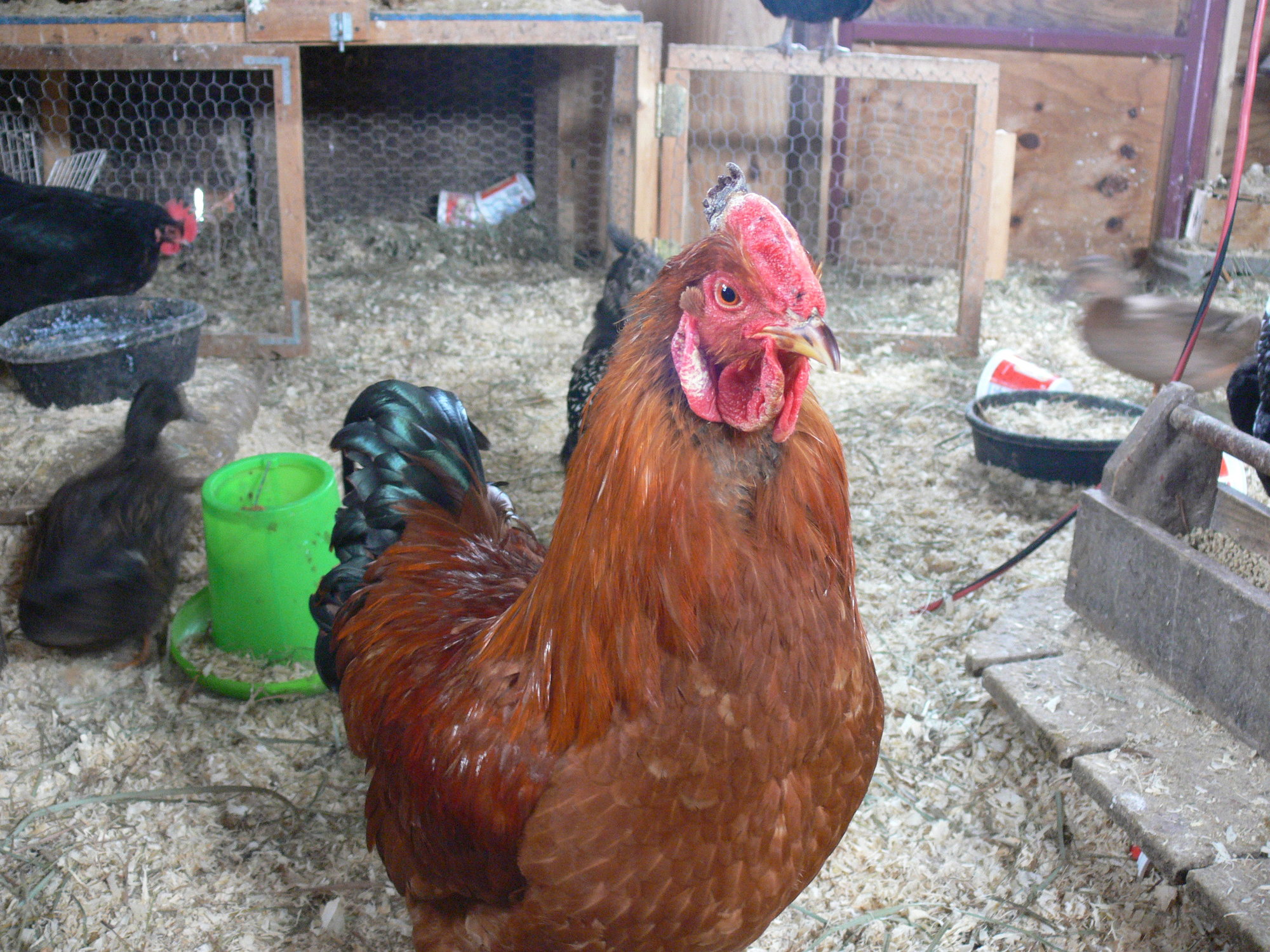 If you are getting hens with frostbite, then that means you're doing something wrong. Open up the vents more and make sure they're in a place where they won't blow on the roosts. I have Leghorn hens right now and they don't get anything more than maybe the very tips coming off even in some pretty cold weather.

That's all for frostbite on combs and wattles. Frostbite on legs and feet does require treatment and is a real headache. I have only dealt with it once and that was when I foolishly hatched in late August and the pullets (bantams) weren't ready for the cold. I won't do that again.

Here's a picture of the frostbit bantam. She lost all the skin off her feet, a toe or two, and all her toenails. Her feet are stiff to this day. 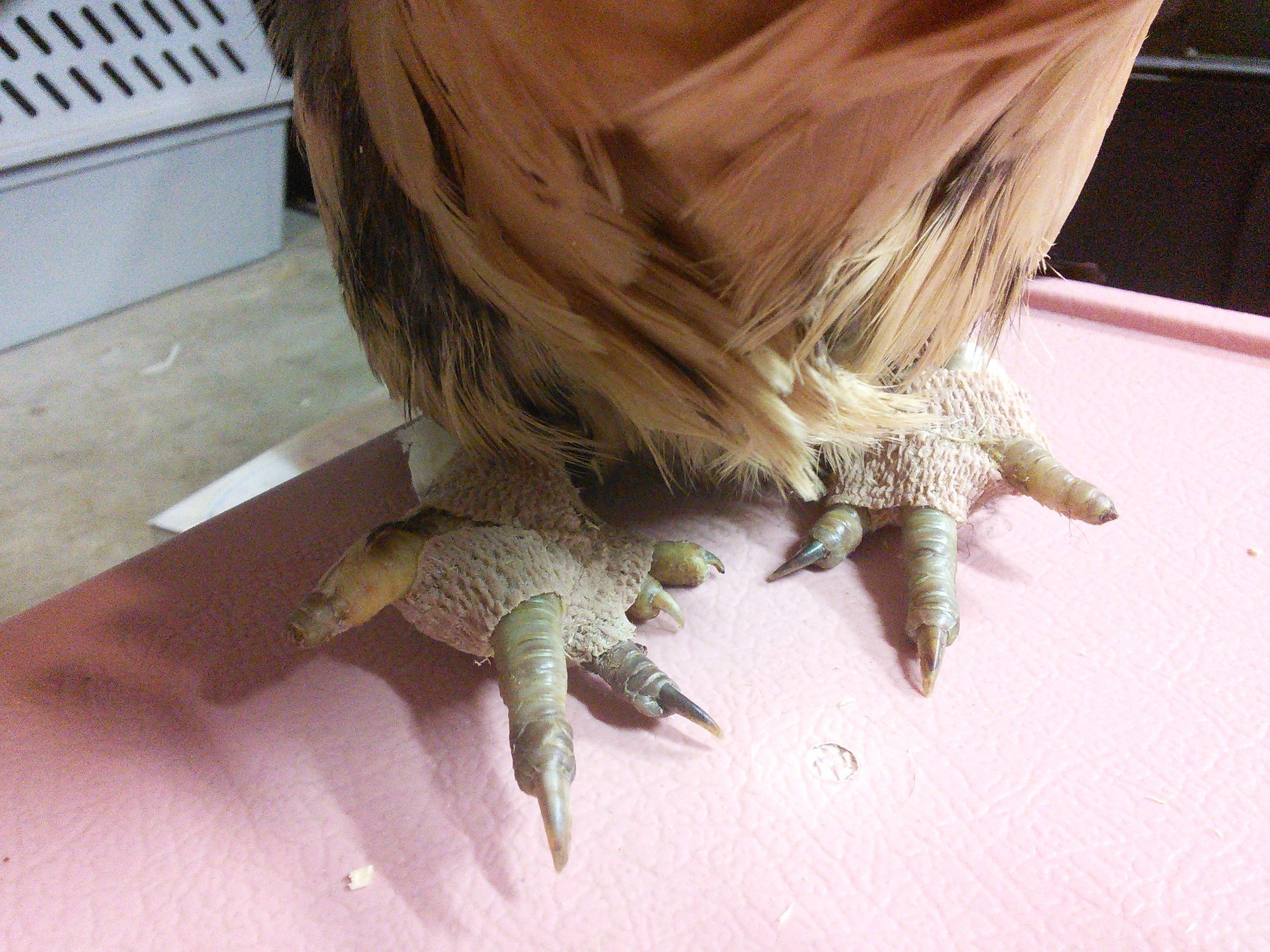 Because of how much swelling there was, I popped the blisters on the bottom of her feet with a needle. That way she could walk instead of tumbling around like those blow up punching bags. Then I slathered antibiotic ointment on the feet and bandaged with a cotton pad and vetwrap. After a few months she was good to go.

Oh, I just remembered. Chrissy, a WH duck, also lost a foot to frostbite after a mink attack left her unable to pull her web under her in the December chill. That was different in terms of treatment—it shriveled and dried without swelling or pus, so I didn't do anything with it. I just changed her bedding frequently, gave her baths, and it fell off on its own. She recovered well from that, but later she lost her life after another accident which I won't go into. 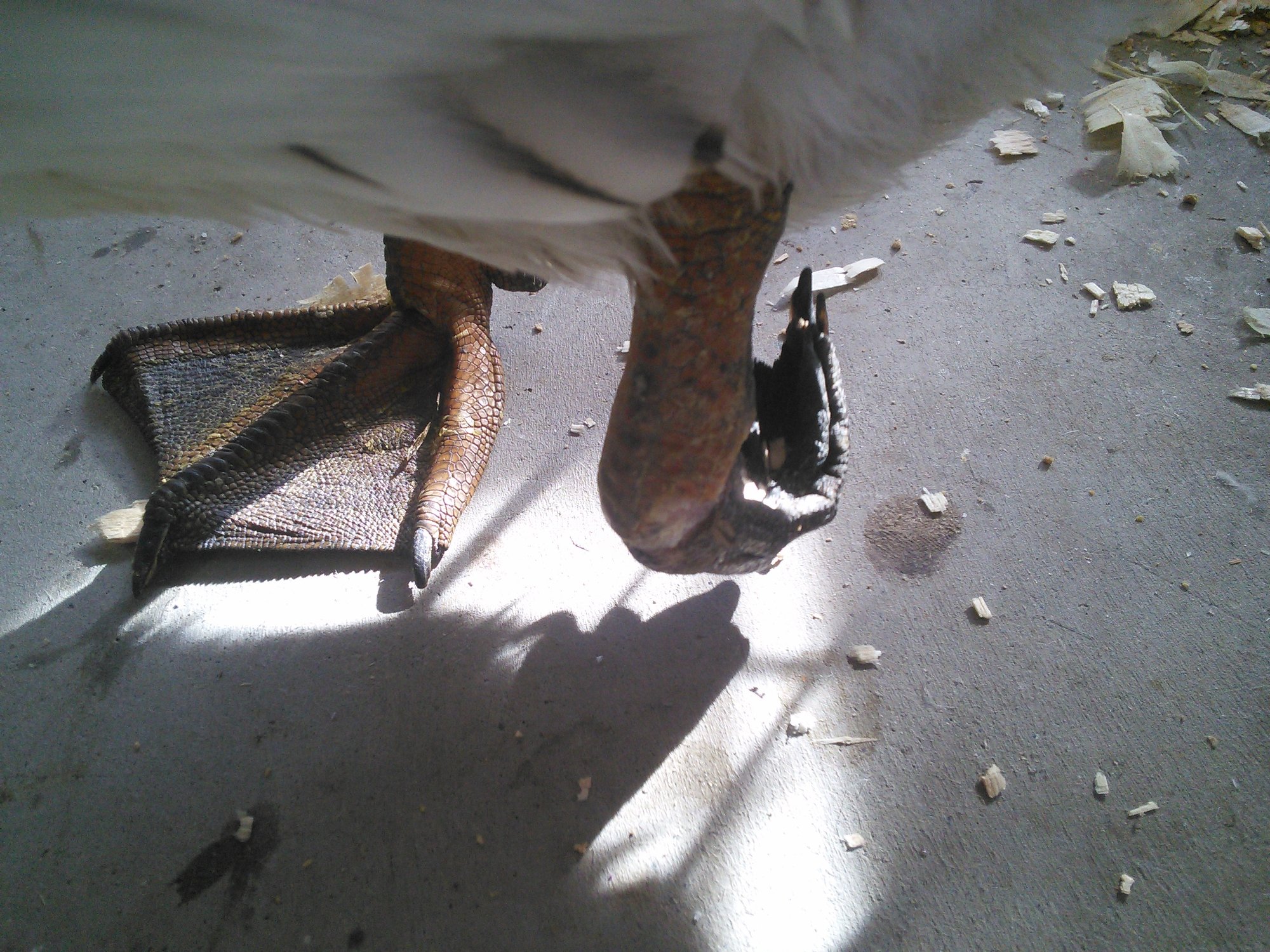 Foot after it fell off. Rather neat in a sick way, eh? 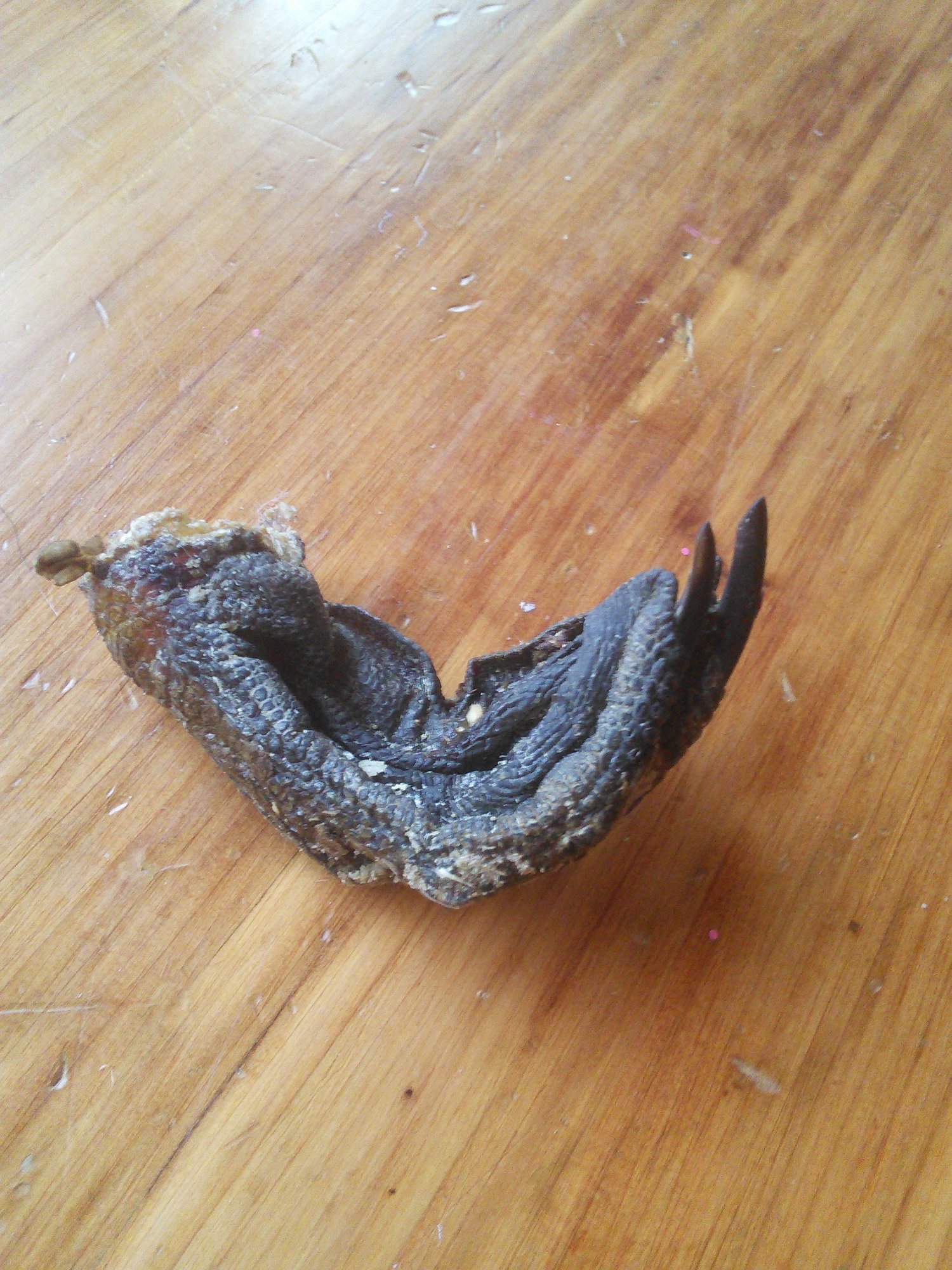 Here's the stump that was left. No infection, just healthy tissue. I bandaged this up with antibiotic ointment and vetwrap & changed the dressing daily. 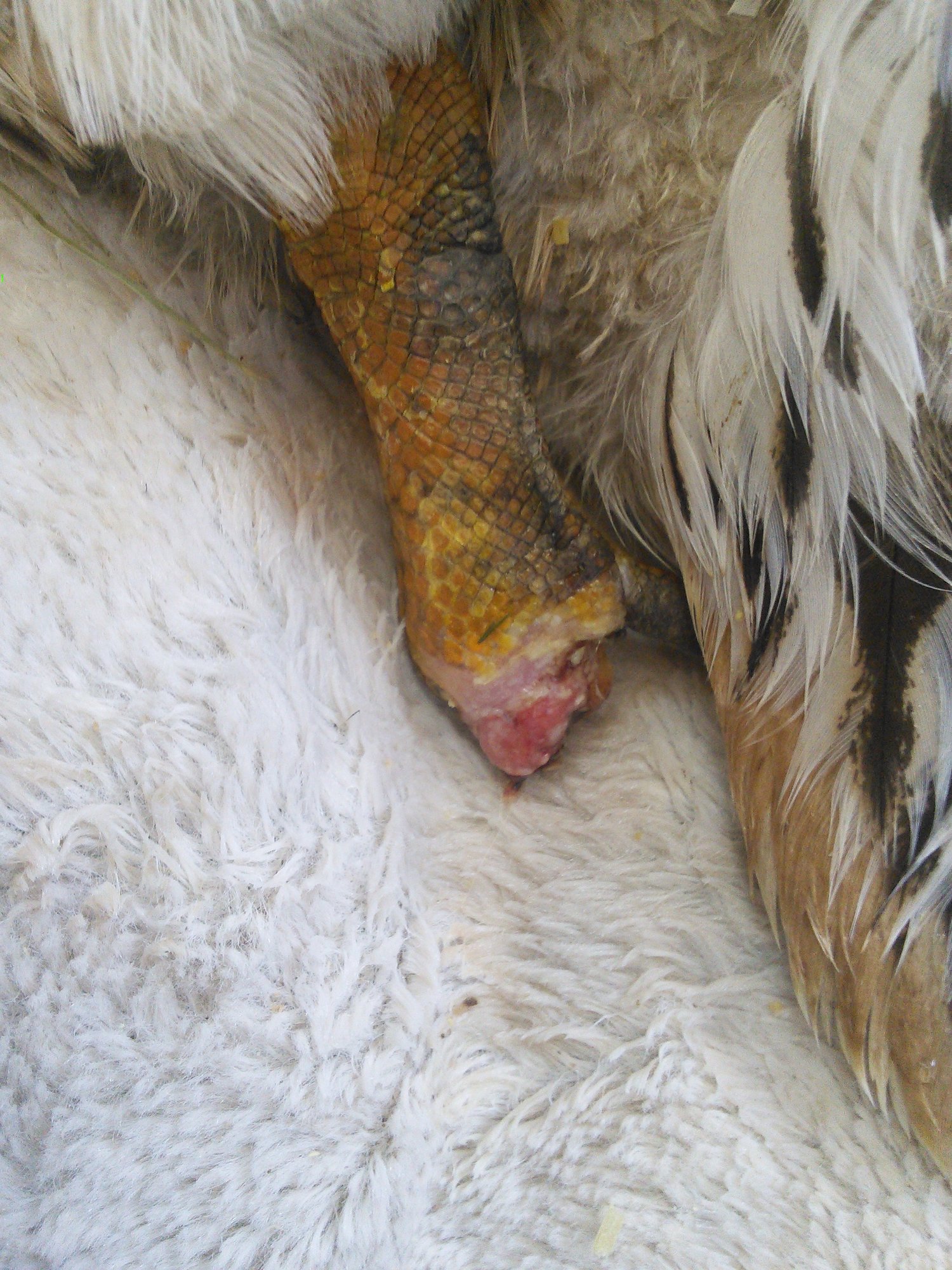 Yikes! Wouldn't want that to happen to my birbs. Luckily, temperatures only get down to around 20-10 degrees Celsius here, after all I live in a desert. And, I'm sorry for your Chrissy.
Last edited: Nov 12, 2017

I'm in Central Alberta, Canada...
This is my Chicken Winter Management...I also have Call Ducks...That's another story....
My Chickens have respiratory disease..Cold weather brings out symptoms...We could be +5C one day and as low as -25C the next..I run heat in my Coop, although it's never that warm..The water does Ice up..I block off the West and North facing vents and keep the other sides open..Breed of Chickens plays a big part in how well the do in cold climates..I have Orpington, Brahma and one little Silkie Cross that sleeps between my Rooster and an Orpington..
I use 2x4 roosts flat side up so they can lay on their feet..
Chickens on a Roost are like a parking lot of Cars running..They breath and moisture rises up and onto combs...Poop also is moisture as is the water in the coops..
My Heat is over the water not directly over my Birds..
I just helped a BYC member relocate her Birds that were not the right breed for our Alberta winters...My Friend bought them to help her out and to save the Chickens from Frostbite...
Knowing the temps of our locations and providing proper feed, water, adequate housing...No Animal should suffer frostbite..
Vaseline is recommended as frost bite prevention...Depepending on how cold you get?...That will freeze too...I recommend certain Cold weather Breeds and management for certain locations..

Eating halos in a corner somewhere

Master Quaillius said:
Yikes! Wouldn't want that to happen to my birbs. Luckily, temperatures only get down to around 20-10 degrees Celsius here, after all I live in a desert. And, I'm sorry for your Chrissy.
Click to expand...

Yea, I'm just going to wish everyone my luck from sunny California.

The coldest it has gotten here is a little below zero, and thankfully I didn't even have trouble with frostbite then. I have a couple of mild cases of frostbite, and I just let them clear up on their own (with good results.)

To prevent frostbite I just apply a thin coat of Vaseline on my chicken's combs/wattles. It never gets bitter cold here, thank the Lord

Here in Iowa, we get below 0 and way below 0 with wind chill. I used to heat-lamp heat my coop just a little, for a couple of hours before "bed". I stopped doing even that, last year. I occasionally coat combs with Corona ointment - it is thick and protective. My hens love being in the barn with my donkeys, so I make them a hay pathway, on top of the snow, to get from their coop to the barn. I use sand on the floor and in shallow "trays" under most roosts. All droppings are cleaned every morning, so moisture is not a problem. I have 7-month-old cockerels this year; I am not worried about my Ameraucana, but my Brown Leghorn has a comb and wattles that make up half of his weight! (just kidding) I will keep an eye on him. In fact, keeping an eye on all of them for changes in behavior and/or appearance is one of the best preventatives.

Bantychooks has really summed it up well with nice graphic pictures.

If you are still with us I can add a few more tips to the foray.

Wattles and Combs
Number one: pick the right breed with the right comb type. If it's too late and your farm supply offered only leghorns and large single comb varieties during the dreamy balmy days of April you are probably in the, " 'Oh Poop!' Nest." With a lot of others. Because why wouldn't a New Hampshire sold as "Winter Hardy" not be able to avoid this...? Thank you hatchery marketing team.

Around here it's called winter dubbing. I monkeyed around with my first rooster quite alot trying to 'help' him. I think leaving it alone unless he smells like rotten chicken (infection) or he can't drink because his wattles are swollen like balloons -- is the best thing to do.
Vaseline is useless. I've been told Bag balm which is waxier is better. I think it did work better as it sort of hardens and repels moisture. But then that wears off quite often and its just avoiding the inevitable with alot of extra work and pressure on you as a chicken keeper. For combs and wattles avoiding the moisture is key.
No warm, steaming oatmeals or squashes from the oven (as I learned). Your putting moisture right in their face when they eat it... and then flash freezing when they move back into freezing temps.
I have found the boys have most issue. Hens often are tucking their heads under the wings at night. Their wattles don't drag as much in the water fount...etc. etc.

Toes and Feet
Lower the roosts. They do not need to be in the rafters. That's where the moisture hangs out anyways and often drips from if it's un-insulated. They need head space to keep clear of the rising warm moisture air before it vents out. Lowering roosts also helps with feet. Broken toes on zealous roosters chasing hens do not fair well in 30 below. Helping them by lowering the roosts makes the impact less when they jump down. You'll need this especially for heavy breeds and roosters (again).

Wet muddy runs should be fortified with dry lofty leaf litter, straw, hay or what have you to keep their feet dry and healthy. Make a little jungle gym in there so the hens can get a reprieve from the chases by jumping up on a nice wide roost to warm their feet or to take a nap. 3-4 inch diameter logs or lodge poles. Flat sides of 2 x 4's. Just so the feet can be completely covered by their feathers and not curl around.

So that's what I know from experience. My rooster now is a big single combed Wellie. Much less dubbing then the New Hampshire I had in my rookie year. But it's possible he'll lose more gradually if it's a bit nastier this winter than last. I'll do my best for him from what I've learned. And that's what you do. Keep learning.
Last edited: Nov 13, 2017

Thanks for covering that. I haven't tried it, so good to know.

I tried and tried vaseline that first winter. It was a winter from Hades. It could help I suppose but it's really a delay for the inevitable. ...Wasted time...