What am I doing wrong..?

Hello, two months ago a friend gave me fertilized quail eggs and I bought one of those styrofoam incubators. I researched temps and humidity and set everything up. I bought an automatic turner. Took them off at 14 days to settle. Seventeen days later, nothing. Waited... 19 days later... nothing. Friend and I did exams of eggs. Of 20 eggs, 9 were viable, 2 looked fully developed and the other 7 were in various stages of development.

Her MIL then gave me 40 eggs and I put them in the incubator. I bought a hygrometer and temp prob along with another glass thermometer and kept track of humidity, temp, etc. At 10 days I had 24 viable eggs. At 17 days I water tested the eggs before taking them off the turner and had 7 with movement and the other ten still looked viable. On hatch day I had 1 struggle with what seemed a really dry membrane despite 65-70% humidity readings and one other hatch... the other eggs never hatched and I left them for about 3 more days. Candling just looked like soup.

New incubator, styrofoam with the circulating air, 24 new eggs. Candling on day 10 showed 14 viable eggs. Day 17 showed 12 eggs with good looking air sacs as I took them off the turner. Hatch day nothing. Hatch day +1 lead to one chick born. Candling showed flickering and good air cells for two more eggs but the others never had air cells move to the side and lengthen.

It’s hatch day +3 and I’ll candle the eggs tonight and probably toss them all out if nothing has changed.

I’m so frustrated trying to figure out what I’m doing wrong. I’ve followed all the help here as well as reviewing other articles. Any suggestions as to what I’m missing..? Or is it all incubator issues? 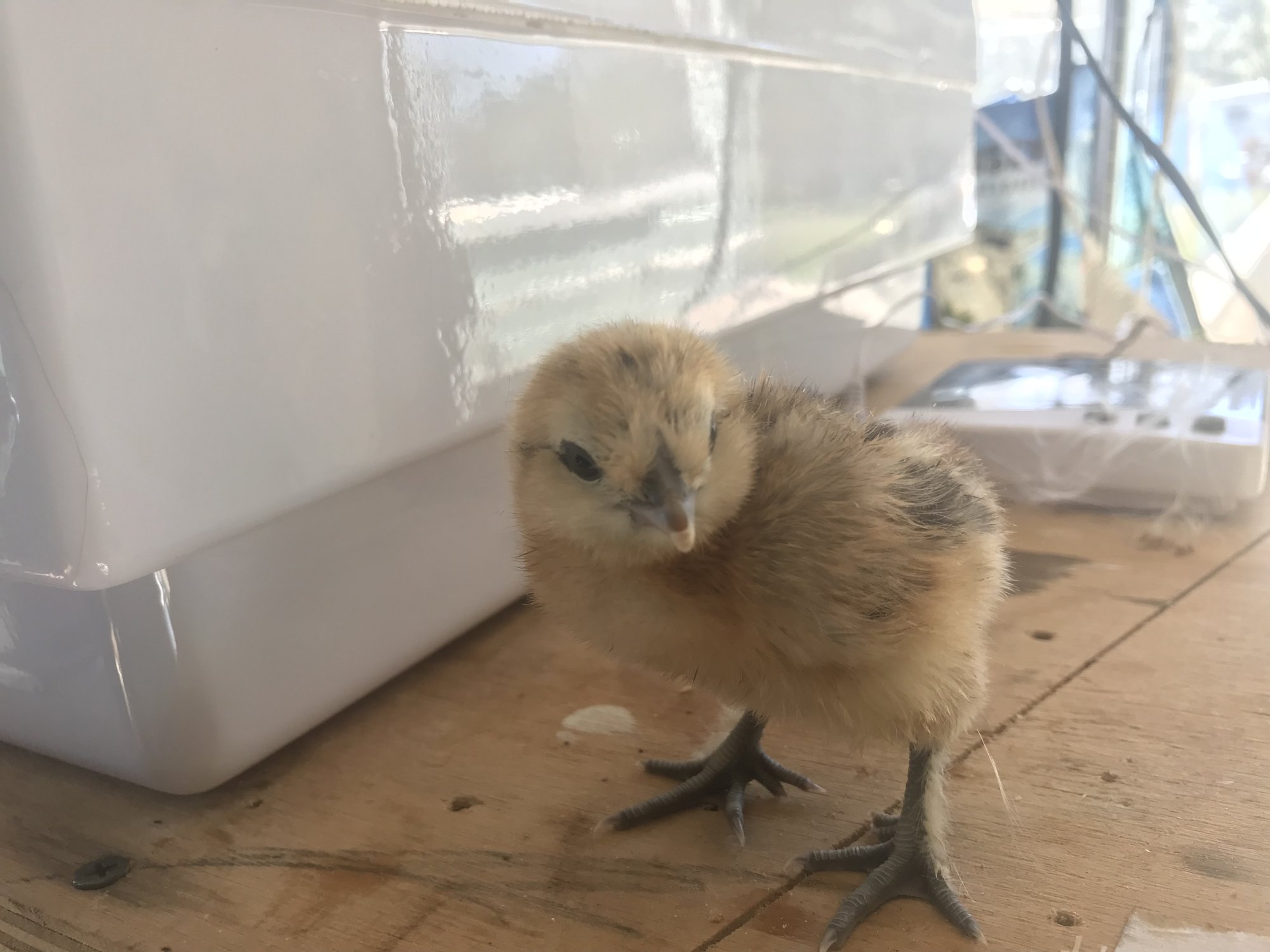 This is my sole chick from this group... five toes with feathered legs... came out of a small brown egg... really bummed as these were all green eggs and pink to salmon colored eggs and I was hoping for those chickens...

It sounds like you have had two different incubators, the first a still air and the second a styrofoam forced air with turner. A lot of chicks have been hatched with those incubators. I use a Hovabator 1588, a styrofoam forced air with automatic turner and generally have good hatches. It's possible there could be an incubator issue but if temperature and humidity are being maintained it should work. You say you've opened some of the unhatched eggs and gotten scattered results. These troubleshooting guides may help pinpoint something for you to look at but especially with scattered results it's possibly different things. Still by opening the eggs you are way ahead of a lot of people.

Have you calibrated your instruments to know that they are reading accurately. Often they do not. At what height you take the temperature in a still air is important as warm air rises, but in a forced air it should not.

In general if an egg fails to develop or stops developing in the first week or so of incubating it's because of something that happened before you started incubation. That's not just fertility even if they don't start developing. Health, diet, and age of the parent flock can have an effect but you've gotten eggs from different sources so this is not likely your problem. There are certain storage conditions that are ideal. Most of us don't have ideal storage conditions so the further you are from ideal the faster the eggs will become not viable. I store mine too warm (room temperature) and too dry (room humidity) and still get great hatches after a week of storage. If I go much beyond that hatchability drops. Storing them pointy side down or laying flat and regular turning helps. Cycles of cooling and warming is not great, even if the temperatures are in a reasonable range. Air from a AC duct can dry them out if it is blowing on them. Direct sunlight through a window might heat them up. Shaking them up is not good, I had that problem once when I did not pad them sufficiently when on a bumpy country dirt road. Horrible hatch.

If an egg stops developing in the last week of incubation it is usually something to do with incubation. Turning the first two weeks is important with chicken eggs. Pointy side down is important unless you have one that incubates them laying flat. Temperatures or humidity may be too high or low. The later you are in the incubation cycle the more you need fresh air in the incubator. The chick can suffocate if enough fresh air in not going through the porous shell or even after it pips or hatches if the air is bad.

I can't tell what is going on. With that lack of initial development it sounds like you may have issues before you start incubating. But losing so many that do develop says there are other issues during incubation. All I can suggest is to calibrate your instruments if you haven't and continue opening eggs to see if you can get any clues as to what is going on.

Thanks for your information-packed reply. Running everything in my head, I'm wondering about storage. The quail eggs had been sitting for days to weeks before I started incubating, so who knows about the freshness. I did have a turner, so they were turned adequately, but I wondered about the humidity as the developed embryos appeared "dried out" somewhat.

The eggs from my friend's MIL had been sitting in their mudroom for about a week after gathering. I'm not sure about the extremes in temp, but it's a possibility that they weren't well maintained temp wise. Also, we have those "country roads" so lots of jiggling there. That was with the still air incubator, and again I wondered about humidity even though I had bought the hydrometer from a greenhouse supplier and used that instead of the built in one.

Reading through your materials, I again wonder about age of eggs as I bought these from a local farmer who had been collecting eggs over last 2 - 3 weeks. She's been keeping them in her kitchen, which I know can vary in terms of temperatures. I tried these in the new incubator with the circulating air, had two other thermometers along with the hygrometer in there. I didn't remove the air vents until the last 4 days and wonder if maybe I should have removed them sooner.

I tossed out the last of the eggs today. One of 14 out of the original 24. At least 4 of the eggs had fully developed chicks, none appeared dry and one even appeared "too wet." The others had arrested or no development even though they hadn't appeared clear at the 10 day candling mark. Don't know what to make of those.

I've got enough chickens for now, even though I would love to add some Australorps and Ameraucanas since all my chicks are white... hoping the one lucky surviving chick will be a female to add some color variety to the bunch.

Thanks for listening and helping me troubleshoot...

A argument for keeping the turner on until day 20.

D
Air cell on side of egg