What's the difference between blue and lavender?

I'm no expert and certainly have a lot to learn, but its my understanding that its more than just one gene from each parent, but a set of genes, which when combined with the set of genes from the other parent create a mixture that results in what the chick becomes.

There's dominant and recessive genes. Its possible for a parent to pass on a recessive gene that wasn't expressed, possibly for generations. If the other parent also passes on that same recessive gene, also unexpressed, there is a possibility for it to express in the chick, depending on what other genes are in the mix. The more offspring that pair of chickens would have, the greater the chances of one of those recessive, unexpressed traits to show up.

Okay, I'm jumping in here with my question. I am so totally confused by reading all of this - I can't keep it straight in my brain! If you hatch "Lavender Split" eggs, what does that mean? I have Blue, Black, and Splash Ameraucanas. I wanted some Lavenders. So, I bought some "Lavender Split" eggs expecting to get Lavender chicks. So far, 3 chicks have hatched. To me, they look like 2 blacks and 1 splash. Where does the Lavender come in? Will the offspring of these chicks be a percentage of Lavender? I am confused!

Quote:Lavender split means they carry one copy of the lavender gene. Lavender is recessive, so you need 2 copies for it to be visible.

I know I've seen someone here auction lav ameraucana eggs. I can't think of who at the moment.

Quote:No, there are many genes for colours and patterns. What you may have heard is that chickens have only two pigments: black (eumelanin) and red (pheomelanin). However genes can dilute or enhance that pigment, or redistribute it.

Or you may have hard that each chicken has two of each gene (except that females have only one copy of specific, sex-linked genes). This is true of all diploid creatures; htey inherit one copy of each gene from each parent.

Each gene has two or more alternatives, called alleles. When a chicken has two different alleles, the relative dominance of those allele determines the appearance. In most cases the more dominant allele will express; occasionally a recessive allele is leaky and may display to a minor extent.

The Blue Mountains of Pa

Quote:in laymen terms..Correct and so buff has many make ups and a lot of unknowns about it, buff is unpredictable even in these days and times..

so breeding lavender/blacks to buff will have many unknowns..so it really will not breed true. but most will be lav mutt colored after recross and recross..when you breed a black bird to buff there are many results then add the lav to it and the recrosses ,o my.

If one is breeding lets say a project lavender orp known to be basically black bird diluted by lav and then bred to lets say, a buff orpington the variation will be so different in chick patterns and colors that all will be basically different looking and so you will not end up with all chicks being a self color..over a period of years I'm guessing some will be if selected right, but to keep it going may be tough
Last edited: May 28, 2010

Here is a visual example of what Suze is saying. I can't say what she did about the different genes that can affect the color outcome but I can show you.

These three chicks came from a pair of white birds. The buff color is a first, the gray I've been seeing for years. In a nut shell we have two white birds that have apparently produced three color gene combinations. 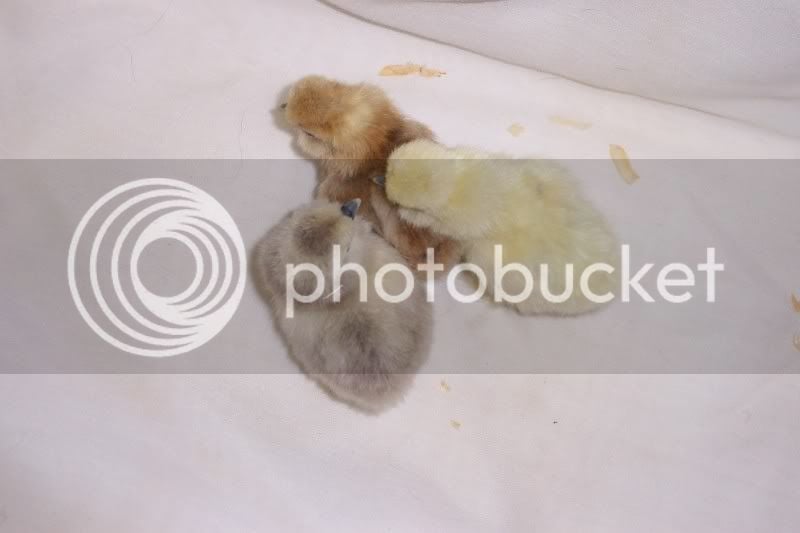 Quote:Just out of curiosity, what does the adult plumage turn out to be on these 3 colors of chicks?

And no, it is not lavender. Side by side the color is not the same. Its more of a mauve color when seen in sunlight.

Quote:Would that be a porcelain?