Ok soooo my egg gathering this eve led to this BIG gem. LOL What is it and who it came out of I havent a clue-from a pen with all young hens. No ridges, shell appears normal...going to put in the incubator for grin and giggles, but still curious WHO gave me this..AND HOW...pen contains Turkens, Reds, Barred Rocks, and 1 White Giant. Hmmmmm ???? 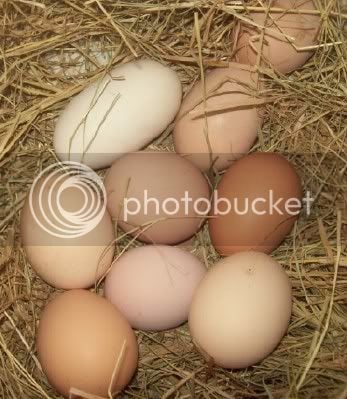 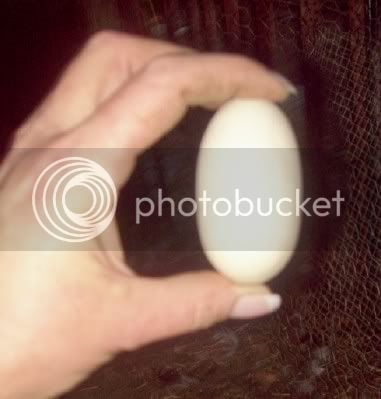 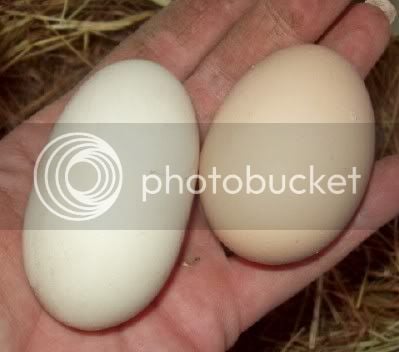 chick a chick a bang bang

I've had random eggs like that.. they usually have a double yolk in them! I use to get them frequently when the hens were just starting to lay, but now it's a little more random.

Hmmm ....ok and Ive been raising chickens forever....but thinking if it is a double yolker and it was fertile...conjoined chicken twins?? Does it happen???

No, a double yolke may start to develop, but it's very rare for both chicks to make it and usually neither one does. At least one will often develop fully, but they have a hard time hatching and are usually pretty weak--just not enough room in one egg (even a big one) for two chicks. They aren't anymore twins then two seperate eggs with the same parents are, they're just contained in one shell, but still two yolks fertilized by two sperm and due to hatch on the same day just like all the normal eggs in the clutch.

People try to hatch them quite often because they think it's neat, but it makes me sad. I just don't see the point in setting an egg that's pretty likely to develop, but not to survive hatching.

The shape of that egg looks like a throw back to the dinosaur ages. Long oval shaped eggs are what I remember seeing in the fossil displays. You might a velociraptor on your hands.

OMG! Violeta Duck is missing! … Disclaimer: The story has a happy end!

F
10 month old hen cannot hold herself up to walk all of a sudden.