When I got white leghorns I was warned of their aggresive personality towards other chickens. Now that they are grown up, they are some of the sweetest birds I got! Is it becuase I raised them with more docile birds in the brooder? I was just wondering if they really are an aggresive breed.

Quote:that is correct, they can be agresive

Mine aren't agressive either. Very sweet and full of personality. I find generalizations about WLH's annoying. Your situation is not annectdotal.

My six brown leghorns did this to six or seven of the SLW and GLWs when they were all the size of the chick in the picture
They nearly balded the GLW cockerel before I could separate them. I reintegrated them about a month ago and although they no longer pull feathers, the will peck some of the milder mannered wyandottes HARD for seemingly no reason. 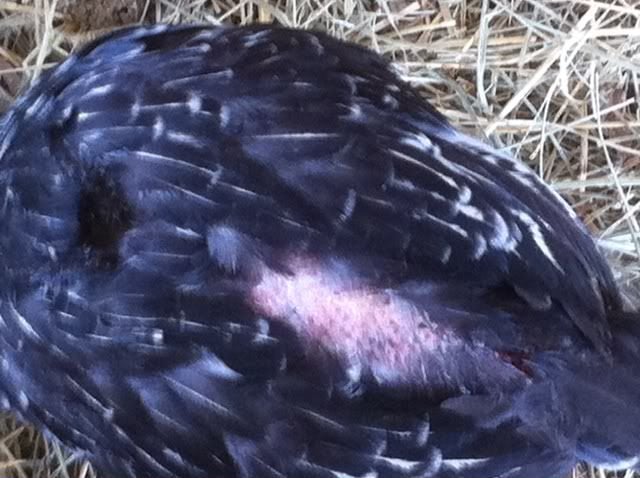 The first two leghorns I got this year were sweet and loving from day one. They were constantly jumping out of their pen to follow us around looking for special treats and foraging. Pearly and Shirley made me forget about how nasty leghorns can be. The next batch had 7 leghorns in it. They brought everything back with a bang. Those horrible cannabalistic mean little monsters came very close to having their necks snapped on a daily basis. I know that sounds harsh to some, but I do what's right for the whole flock. They had plenty of room, food (of the right protein level), and appropriate light. I used blue kote, pine tar, and bitter apple to no avail. They would just pick a different spot on the other chicks. I separated them, so they started eating each other. They killed one leghorn and one partridge rock. They are now 20 weeks old and looking for places to lay eggs. Dianna and Carla like for me to pick them up and put them into a nest box. Marla, Darla, and Claira like to follow me around, but at this time don't want to be picked up. Laura stays with the Turkens that she used to eat bloody. Caroline wants nothing to do with her, but then she still has no feathers on her back or tail. Even the few feather she got on her neck were picked off. The other three tolerate her, but I don't think they really want her around. The times they are a changing. I so much appreciate this older and sweeter version. We still have so many pullets that have no tails or large section of feathers missing on their backs or necks. There were 26 chicks in that batch. Twenty four survived, but what a raggedy batch they are. I moved them in with the older (by all of 6 weeks) girls and they look so horrible next to those sleek and smooth young ladies. Thankfully we have some time before winter hits and they become bored. Hopefully the naked girls can get some feathers in by then. Also the older girls will not tolerate getting their feathers plucked, so they will get some much needed discipline if they start trying it again.

My feather picking and cannibalism problems with my high-speed Leghorn girls stopped when I changed the way I fed them.

No more grains. Just straight layer feed mixed to 18-20% protein. No treats, nothing but layer feed and pasture. Egg production went up, feather picking went away.
You must log in or register to reply here.
Share:
Reddit Pinterest Tumblr WhatsApp Email Link