Why Chickens are Incredible

Studying at the Library

Why Chickens are Incredible

This was not made for educational use.

Aren’t chickens nasty and dirty? Don’t they go to the bathroom everywhere? They should never be let inside the house, nor any neighborhoods! They can peck your fingers off! They are birdbrains that should stay in barns! If you can define chickens, most would say that they are annual egg-laying and cute, fat, and uneducated birds. Right?

But no, no, those rumors are false. Don’t think so? Then continue reading this!

We think that chickens are not as devoted or caring as we do, but we are definitely wrong! Chickens are amazing and affectionate mothers. Starting from an embryo all the way to a chicken, Hens will purr and cluck to their chicks, giving them advice about safety and health. The most common reason that they peck you is not that they think that you are food, but to defend their babies. Like many parents, the hens would usually chicken out if their children are missing or injured. Also, when they are eggs, they always keep their eggs warm with their body. Even if they know that the eggs are not fertilized and they are not going to hatch, they still treat them with care. Awww, how sweet!

“The domesticated fowl is able to apply logic, understand physics, navigate efficiently, and much more(S. Henkel, 2016).” If you read these next few facts, you might even stop eating chickens. How about this fact: Chickens are smarter than dogs.

I bet at least half of you reported this article as a fake when you read that.

But no, no lies involved. In fact, sheep, goats, cows, and pigs can be smarter than dogs!

For now, let’s stick with chickens. If you think about it, how many signs on street poles or signs have you seen that said that there was a dog or cat missing and/or lost? Because I’ve seen tons. But starting at the tiny age of TWO WEEKS, “chicks can navigate using the sun’s position and height(S. Henkel, 2016)!” Wow! Even most ADULTS need a GPS to navigate a certain location. Don’t underestimate birds, everyone.

One last fact: They develop a skill called object permanence, which is the ability to understand that an object exists, even though they can’t see it. Two days. For normal human babies, it takes about 6 MONTHS to develop this ability! That’s so cool!

Great Uses of the Chicken

Many people will not believe this, but chickens can actually learn to play games and do puzzles! For example, on America’s Got Talent, Jokgu, 2, played “America the Beautiful” on the keyboard. “Now, that’s what I call talent!” -Tyra Banks, Host of AGT.

This is a true fact that not everyone would know. Chickens can lay up to 350 eggs per year, depending on the breed and parents. If you have a rooster and a hen, then some of your eggs will be fertilized, which means that you will have chicks. But, since roosters are not allowed in many places, if you don’t own a rooster, you’ll still have the best-tasting eggs of your life. No one can compare supermarket eggs to fresh chicken eggs. Supermarket eggs are nice, and fresh chicken eggs are indescribable. Chicken meat is also tasty, but you might have to take them to a butcher for them to be slaughtered. I wouldn’t be able to do that on my own!

(And if you have a dog, it might eat the chicken’s poop.)

And also, there is NO better feeling than having a fluffy chick fall asleep in your hands. 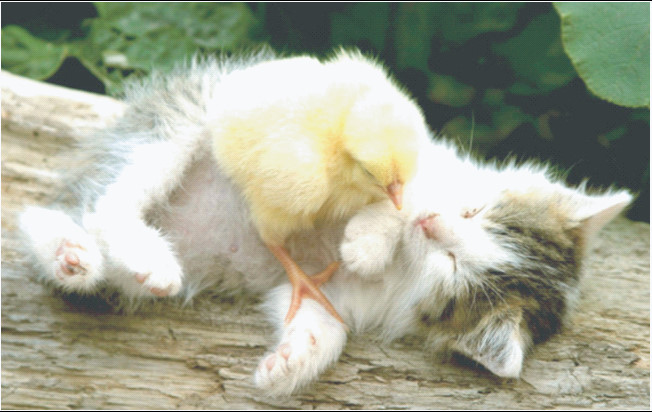 Studies show that chickens are smarter than dolphins: http://www.freerepublic.com/focus/f-chat/3511627/posts

Are chickens smarter than toddlers?: http://www.globalanimal.org/2016/04/18/whos-smarter-the-chicken-or-the-toddler/

5 farm animals that are smarter than your dog: http://www.onegreenplanet.org/animalsandnature/farm-animals-that-are-probably-smarter-than-your-dog/

Jokgu is amazing, and so calm about it all! Thanks for sharing.

I've hand reared some finches and they too are incredibly intelligent. I also read an article today where they have discovered that Zebra finches have a special song they sing to their eggs during hot weather to prepare them. The chicks exposed to this song grow slower and cope better in the heat.

Being called a 'Bird Brain' isn't an insult, it's a compliment!

JaeG said:
Jokgu is amazing, and so calm about it all! Thanks for sharing.

I've hand reared some finches and they too are incredibly intelligent. I also read an article today where they have discovered that Zebra finches have a special song they sing to their eggs during hot weather to prepare them. The chicks exposed to this song grow slower and cope better in the heat.

Being called a 'Bird Brain' isn't an insult, it's a compliment!
Click to expand...

Thank you Lauren Kim for the wonderfully put post. I had successfully raised my own flock of chickens.....15 years ago, successfully rescued countless songbirds and found all of my winged friends to be quite intelligent. I'm so glad to be a part of this group!

Chicken contest (NEW, OTHER ONE CLOSED)