Will my chick be ok?

My chicks are now 4 days old and ive been closely observing them.My black australorp chick has always been really quiet and calm compared to the other chick,but i think there is something wrong with her.I have noticed she has diarrhea and is laying down and sleeping alot more than the other chick.She still will run around and eat and drink for a few minutes but she tires out very quickly.Is something wrong or am i just being paranoid chick mother?

You're not being paranoid - it sounds like something is up. I can only suggest what I've done for mine - I'm not that experienced, and I just research a lot when I have a problem and then give it my best shot. There are many folks here with loads more experience and knowledge than I have.

Are they on medicated chick feed?

She may have coccidia and whatever she has, they will probably all have it soon, if they don't already.

I would give her some vitamins/electrolytes in the water ASAP and make sure she's drinking. TSC sells something called Chick Saver you can try. I'd also try to get her to eat some plain yogurt, for the good bacteria for the gut, or use Benebac

The medicated chick starter is supposed to keep coccidia in check. If they are on plain chick food, I would probably do antibiotics in the water, rather than just putting them on the medicated food; the levels in the food probably aren't enough once they show symptoms.

1/2 tsp Corid powder mixed with 1 gal. water [I've read lots of different opinions on dosage so that's just the one I chose to try] 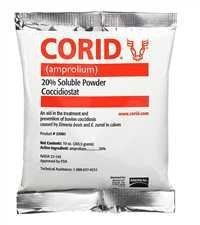 Try the Corid. If she is by chance working on a nice case of coccidiosis you may save her. If it's cocci and you don't treat you will loose her. Simple as that. It's lethal and it kills fast. hrhta812 listed the dose for the powder, if you get the liquid the dose is 9.6 ml per gallon of water. Either one is fine. Make it up fresh every day, give it for 5 to 7 days.

Medicated starter is "supposed" to keep cocci in check. But it often doesn't, I've had chicks come down with coccidiosis while on medicated starter. So don't depend on that or use that to rule out cocci.

I feed them medicated chick feed,shes been eating it since day one and i have probiotics in their water.Ill make sure to go out and get some electrolytes too.Anything else i can do?

Chook eye is closed most of time but can still open and looks slightly puffy compared to the other.