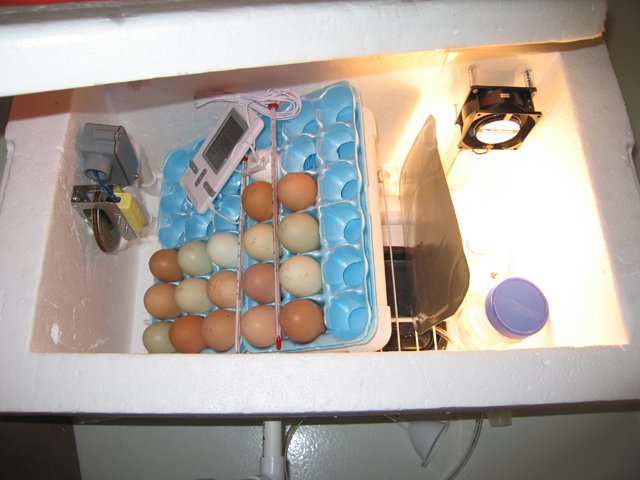 Birdbrain's Better Bator
​
Okay, I realize that is a bit presumptuous, but it rhymed, so I went with it. After all, having a homemade bator is "better" than having none at all.
About a year ago we ordered some beef from a grass-fed beef outfit in Amarillo, TX. When the order came, we were happy with the meat, but I was THRILLED about the big thick Styrofoam cooler that it came in. I immediately thought of building an incubator and squirreled it away for the future when I could persuade my DH to let me make and use an incubator. The kids knew that the big white cooler in the box was off limits for their inventions and waited more or less (okay less) patiently for the persuasion campaign to take effect. Late last year my DH finally caved: "Yes, dear, you can go ahead and make an incubator. By the way, I have some ideas on how to put it together." Being translated means "you can make it but it will be done my way". I could live with that. Besides he usually has some really terrific ideas.

We immediately began to collect the items necessary to make this wonderful contraption. DH's main concern was safety and as such he wanted all the wiring in electrical boxes or conduit. AAAARGH. I could just see the outside of this looking like something from Star Trek's Borg. However, it turned out great and even looks pretty good to boot. So, here is how we did it....

We started with that meat cooler. We cut a whole in the top for a double window made out of plexiglass and a groove on each side of the lid for the plexiglass to sit down into. We then used caulk and duct tape to seal it up. As I said before, I don't think we will use the caulk again as I don't think it really added anything. Then we set about constructing a turner. We used PVC pipe and fittings to make a frame that would support a couple of egg cartons. We figured out that it was easier to cut the cartons along the fold between the top and bottom and then (after cutting off the bottom of each cup) glue the bottoms into the tops. From there we glued the two egg cartons on to the PVC turning tray. We attached the turner to the bator by cutting out a hole on either side of the bator and inserting a short section of PVC through the Styrofoam and into the turning apparatus. We added a PVC "T" on one side and an elbow with a 5-6 inch section of PVC on the other side to act as a turning arm.

We installed a wafer thermostat and a computer fan and found a rack (old section of wire shelving from a shelving project) that would work. Tested the turner for fit and function:​ We ran all the wiring inside the bator through plastic conduit so the kids wouldn't get shocked if they decided to go excavating. The wiring for the fan bypassed the thermostat so it stayed on the whole time while the light turned off and on depending on the temperature. When we installed the fan, we cut short sections of tubing to off set the fan from the wall (several nuts added between the fan and wall would work in place of the tubing as well). We ran long toggle bolts through the tubing and bator wall. To prevent the tubing and nuts and bolts from pulling through the Styrofoam as we tightened them we used some heavy scrap plastic as sort of a large washer. The thermostat turning key was replaced with a long toggle bolt with threading that matched (it is the middle screw in the first picture) and adjusted temps with a screw driver. The light is connected to one of those shallow round junction boxes with a screw in type pvc connector that joins it to the conduit. We also added vent holes and a tube to add water (we stuck a small funnel onto the end to make this easier). We used a 60 watt bulb behind a foil shield (bottom of a lasagna pan--regular foil folded over cardboard or something else stiff would work) and added a peanut butter jar full of water to act as a heat sink. A plastic TV dinner tray was used originally for the water but found it upped the humidity too much and we added a half cup container (apple sauce cup) which we kept full and it held the humidity just perfect. We left the original container in there and used it during the hatch for higher humidity. Four small holes were added for ventilation and left open the whole time...two just above floor level and the other two (on the opposite side of the bator) near the lid. Our Water wiggler is actually an egg filled with hair gel and sealed with hot glue and the temp probe inside. We call it the "fake egg'. It is the very white egg. Our bator held very steady. We added a couple of scientific thermometers to see if the digital one was accurate. It was pretty close. We calibrated the hygrometer and found it read 4% points lower than actual. When we stopped turning the eggs we took them out of the turner and set them in an extra egg carton. We then removed the whole turning aparatus and plugged the holes (tape works great). We slipped in a foil lasagna pan with nonskid shelf liner and returned the eggs to the bator for hatching. They hatched a day early so I may have had the temps a smidge on the high side. The three weeks passed quickly and we were rewarded for our diligence with 9 very healthy active chicks. Half of our eggs had been refrigerated at 37 degrees for 5 days so we didn't know how those would turn out. Four of them hatched out. The other five were not refrigerated for any period of time.


Here is how we calibrated our hygrometer (thanks to some knowledgeable people on BYC):​
Using a mug, mix a half cup of salt with about a fourth of a cup of water to make a salt slurry. Place the mug and your hygrometer into a large Ziplock bag and seal it. Wait for 12 hours. Your hygrometer should read 75%. If is off one way or another, just at the difference to your display when you read it and make adjustments to your humidity based on the new value. For instance, our hygrometer read 71% after 12 hours. I new that I needed to add 4% to the displayed number to know what the humidity truely was.


We homeschool, so everything we do ends up in a learning adventure. This project was no different. We looked up information on the web. One of the neatest sites we found actually had lesson plans which we used to some extent. Those can be found at:


Worksheets and a game:
http://www.urbanext.uiuc.edu/eggs/pdfs/worksheets.pdf

Lesson plans and activities: (see links on the left of the site below)
http://www.urbanext.uiuc.edu/eggs/activities.html​
We kept track of our progress using the form below.

Another two in one article: Styrofoam Incubator plus DIY egg-turner.
Comprehensive list of materials used, detailed description of the built and even a suggestion for a progress form . Perfect!
Informative page and I especially like the well set out items used.
Reactions: WannaBeHillBilly
The article could use an update letting us know how it worked for hatching chicks
Reactions: WannaBeHillBilly
Read more…

thats very creative like it very much i got mine at tractor supply but didnt come with a turner thinking about using your idea for the egg turner
Wow, amazing job! You my friend are a meticulous builder =)
Dont mean to be a doubting Thomas but how do you know the salt test on your hygrometer is accurate? WAs it a university test or some scientist?
Why did you trust its accuracy and not the set point it came with? Just wonder. Not saying its wrong at all.
How did your eggs come out Did you get a good % hatch?.
Very practical set up