Coyote - Chicken Predators - How To Protect Your Chickens From Coyotes 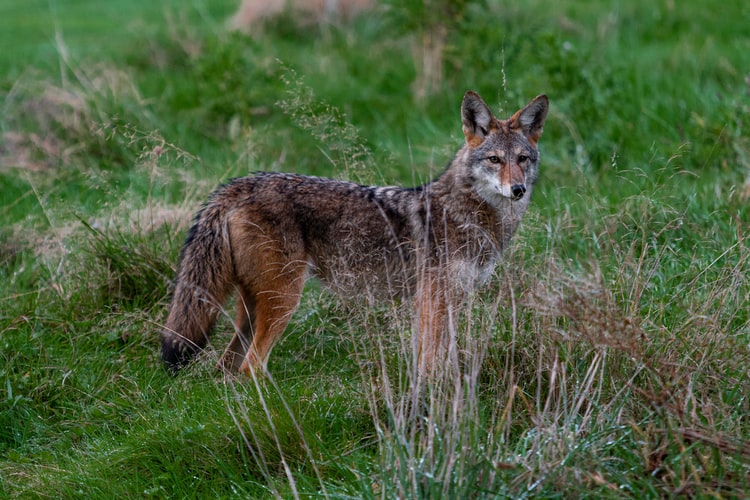 Coyotes (Canis latrans) are a species of canine found throughout North and Central America, Mexico, Panama and Canada. Coyotes tend to travel in large groups, knows as packs, bands or routs, though they primarily hunt in pairs. Coyotes have adapted to living and thriving in urban areas, where the presence of humans and their activities drove them to more nocturnal behaviour, though they are still sometimes observed during daylight hours. Coyotes will sometimes mate with domestic dogs and the resulting hybrids, called coydogs, are cosidered a more serious thread to livestock than pureblood animals.

Most adults weigh between 22 to 25 pounds on average, with males being larger than females. In the hotter drier regions, coyotes are tan-brown in colour with streaks of gray. In the more mountainous or humid areas, their coats are darker with less brown. In the winter their coats become quite thick, especially in the colder areas. They have large triangular ears on top of their heads and long, narrow muzzles. They have black noses, yellow eyes and long, bushy tails. One way to tell coyotes apart from dogs and wolves is the way it holds it's tail when it runs. Dogs run with their tails up, wolves with their tails straight out and coyotes with their tails down.

The Coyote is found throughout North America from eastern Alaska to New England and south through Mexico to Panama. It originally ranged primarily in the northwest corner of the US, but is has adapted readily to the changes caused by human occupation and, over the past 2 centuries, have been steadily extending its range. Sightings now commonly occur in the majority of the US and Canada.

Coyotes are tenacious and opportunistic predators that can easily wreak havoc on your poultry farm. These nocturnal hunters will hunt for food whenever they are hungry or if the opportunity presents itself. A chicken buffet that is laid out for their easy access and convenience will attract not just a lone killer, but a pack of merciless coyotes. They kill chickens by going for the jugular area. After killing it they will drag a chicken away from the coop and eat it elsewhere. However, coyotes who are in dire need of food will not hesitate to stay and hunt, in some cases may even take your entire flock! Check for signs of struggle and coyote tracks around your coop to ensure that it is indeed coyotes that are harming your flock.

The easiest way to protect your birds against coyotes is by keeping them in a Coyote-proof coop and of course, to make your properly as least attractive to coyotes as possible. Coyotes are mostly attracted by dog food, garbage and sometimes bird feeding stations and any animal small enough to appear as prey.

If you have an existing problem there are a few ways to get rid of coyotes. Many farmers in the US make use of well trained livestock guardian dog to protect their livestock and drive away coyotes. If you are not allowed to shoot or kill a coyote you can scare them off by letting off a few rounds of shot. Another option is setting traps, but make sure that they are out of reach of your chickens, children and other pets. Another great way to deter coyotes is to install motion sensor cameras and electric fences around your property/chicken coops. You can also call your nearest Animal Control centre to assist and advice you.

Make sure you read your state's specific regulations before killing or relocating a coyote though.

The Coyote ranked number 5 in our Worst Predator Poll! Take a look at the results here!

For more discussions on other predators and how to deal with and deter them see the Predators and Pests section of the forum.
Reactions: Hensintexas, TLCMidMichigan, Prairie Orca and 1 other person

I have a black lab my only dog that stays outside. She is a year old and is close to the house. She wont bother chickens but would it be smart to put her near my new chickens I get soon to protect them from coons and coyotes?
Coyotes can gang up on 1 dog and Coons can lure the dog into a pond and drown them. We have a guard Llama and a mini horse in our chicken pen and they keep all predators away. The only thing that wouldn't scare off I suspect, would be a cougar...can't win em all....
Never heard of Coydogs. Around here we call them Dogotes. We have TONS of them around, too.
Whoa... never in my life heard of a coyote breading with a domestic dog... weird!
It's common.i think
Here in Michigan Coyotes are not protected. You can shoot them 365 days of the year.
The law is: "If doing harm to live stock"! Lock and load with #4 buckshot in a 12 gauge.
Coyotes will also hunt in the daytime, especially in suburban areas.
Do you want to call in the coyotes to DISPOSE of them if you have chickens or is that just inviting trouble? My chickens are in a pretty strong pen and awaiting a fence we purchased but it's on backorder. I see some mountain lions and coyotes in the trail came from the back yard. I'd like to take out the coyotes, so should I call them in with a PREDATOR or ????
Calling them in involves a predator call use. Most times a rabbit in distress or a chicken in distress.
Use a shotgun when under 50 yards with #4 buck. Long range done with a rifle such as a .223 or 22-250.
That would be out to 100-300 yards. Whatever your good at. And if your in a rural area with no restrictions as to neighbors close by. Use common sense.

tvlrich said:
Do you want to call in the coyotes to DISPOSE of them if you have chickens or is that just inviting trouble? My chickens are in a pretty strong pen and awaiting a fence we purchased but it's on backorder. I see some mountain lions and coyotes in the trail came from the back yard. I'd like to take out the coyotes, so should I call them in with a PREDATOR or ????
Click to expand...

Trust me, they already know your chickens are there.

If they haven't gotten into your pen yet, they're either not too hungry or else your pen is doing a good job. If you want to call them in to dispose of them, and it's legal in your state, a rabbit call at dusk is what my husband uses. But they're smart and spook easily. Good luck!

tractorgirl said:
Trust me, they already know your chickens are there.

If they haven't gotten into your pen yet, they're either not too hungry or else your pen is doing a good job. If you want to call them in to dispose of them, and it's legal in your state, a rabbit call at dusk is what my husband uses. But they're smart and spook easily. Good luck!
Click to expand...

A few years ago, we were sure that it was a coyote taking one chicken per day from our free range group. So we sat behind a group of trees, calling a rabbit distress at dusk. No coyotes showed up, but we turned around and there was a large male fox watching us from BEHIND, no more than 100 feet away, hidden in brush and trees. He came in through our yard and followed tree rows and tall grass. He was beautiful and of course, we just startled each other so he ran off a bit - but just far enough away to be safe. Very smart. We just pen the chickens up now. And - coyotes are more likely to slaughter the whole group, not just one at a time.