Introducing a Single Hen to an Existing Flock 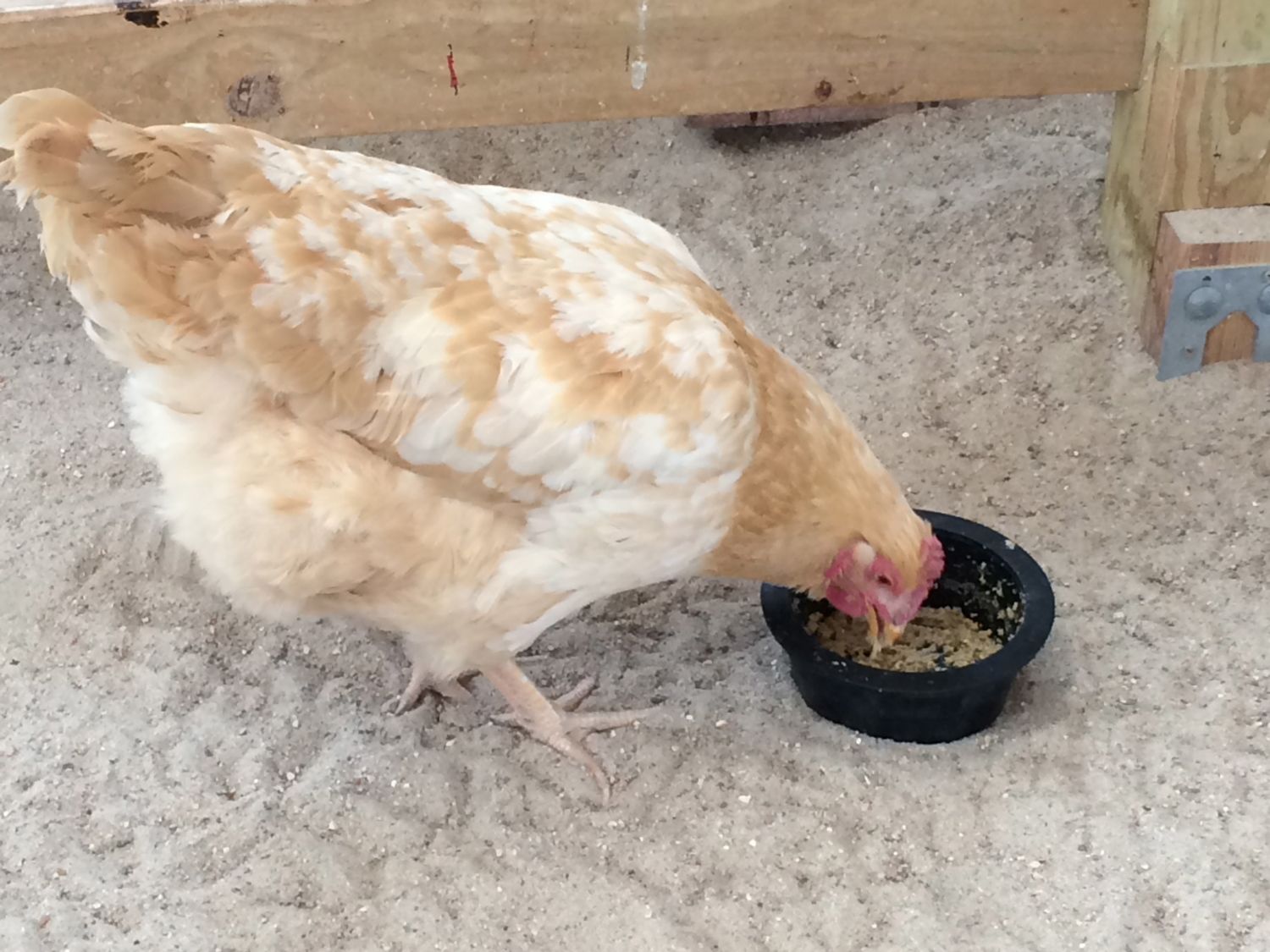 On December 18, 2015, a friend and I embarked on a long trip of several hundred miles to pick up a two-year old Buff Orpington hen at an animal shelter where she had been brought after a neighbor discovered her all alone and the rest of her flock dead. The owner apparently had moved and abandoned his chickens to fend for themselves. I named her Edith.

I knew it wasn't going to be a stroll on a sunny beach integrating this strange hen into my flock. Chickens wrote the book on xenophobia. I wasn't concerned about quarantine since she had been thoroughly examined by a vet, wormed, and observed over almost a week in the shelter before I got her. So upon arriving at her new home, she was installed in a large wire dog crate situated in the middle of the run. The flock crowded around the crate, mobbed it is a better description, actually, and proceeded to stab at Edith through the bars of the cage with their beaks. They conveyed to her that she was definitely not welcome. I figured she was safe enough, and I left her with food and water to begin the long process of becoming a member of her new flock.

That first night I threw a blanket over the crate and let her sleep there, instead of putting her in the coop with the others.

The next day all but a couple of young hens had lost interest in the stranger among them. But the ones still hanging around her crate had managed to bloody her comb and some of the blood had smeared her golden breast. Well, this cage isn't going to keep her safe with these vicious beasts, I decided.

So I moved Edith and her provisions into the "jail" pen, a much larger enclosure than the crate, so she would be able to get far enough away from stabbing beaks to avoid further injury. That worked splendidly, and the integration proceeded from there without further incident.

On the second night with the flock, after the others had settled in for the night, I took Edith out of her pen and placed her on the roosting perch at the far end away from all the others. No problems at all.

On the morning of the third day, I took her right off her perch and placed her back in her safe pen with breakfast and fresh water. The day passed without incident. However, that night I was late getting out to the run, all the chickens had gone in to roost, and Edith had flown out of the pen enclosure and was perched on a ledge over the coop entrance, obviously at a loss as to where she was supposed to sleep. I felt just awful for letting her down. Everything had been going so well, too.

It turned out not to be a big deal. I picked her off the ledge and deposited her on the roosting perch inside the coop, and she settled right down for the night. The others left her alone.

Over the next week, Edith was waiting for me in the coop to carry her to her safe pen. It seemed we had already established a bond. But before the end of the first week, I thought it was crucial to begin exposing Edith to the pecking order. After she ate, I opened her pen, and she spent the rest of the day mingling with the flock, getting pecked and chased. She needed to learn who was going to leave her alone, and who she needed to watch out for.

During that first month, I made sure she was fed twice a day in her safe pen so she would get enough to eat. If the pecking order was stressing her out too much, I let her "vacation" in her safe pen, and it was obvious she appreciated the rest. I also began adding the two youngest pullets in her pen to keep her company. Aside from the obligatory peck on the head to let her know she was ranked last, they got along peacefully. By week two, Edith was free-ranging with the flock, and by week three, dirt bathing with other older hens. The bond between Edith and the youngest pullets was also growing, and they were roosting together and loafing together.

Today, Edith is fully accepted by the flock, although she's still at the very bottom of the pecking order. She moves freely around the run, goes in and out of the coop, and roosts with very little fuss from the others. She has developed the self confidence to boldly attempt to eat from the feeder, until she gets pecked, that is. But undaunted, she just keeps coming back and manages to get what she needs.

Best of all, Edith has become very cuddly and affectionate and enjoys hugs and snuggling. She even participates in group hugs with little to no jealous pecking from the others. While it's a difficult undertaking, it's not impossible to integrate a new single hen into your flock. Integrating this single hen into my flock was worth it and proved to be a very rewarding experience. I just wanted to share this story with the community to let you all know it can be done successfully. In a surprisingly short period of time, a single hen can be fully accepted into the flock.
Reactions: Oldenburg Mom, ameliathedominant, M Blance and 68 others

Helpful article for integrating new flock members
Wonderful article! Gives me hope. I am currently about 3 weeks into trying to integrate a beautiful Barred Rock Hen into my small flock (4) She came from the exact same situation, abandonment by previous owner when they moved. A friend of mine was working at the house, saw her all alone & called me. She has bonded with me & spends a lot of time in the house when the stress of the other girls gets to her. (& ME!) Last night she spent her first night sleeping in the large coop & there was no bloodshed! Taking it slowly, but there is hope!
this is a wonderful example of how to integrate. I find some examples seem rushed. I think it’s so important to slowly introduce our girls to each other. Thanks so much
Read more…

Great article!
Good job! I followed a similar approach with two pullets two years ago. They are now treated like long-lost flock members.
Edith is gorgeous by the way!

Congratulations on getting Edith integrated into the flock. I usually only have chicks who are raised by my broody hen. When it comes time to integrate them into the flock. Stella (my broody) takes care of any hen trying to peck her chicks.
Thank you for sharing this! Excellent!
What a GREAT story about that beautiful bird. I love a good rescue story too. Edith. I think everybody should have an Edith.
She's adorable. I'm glad you were able to save her!
Thank you. Wonderful article. I will also be in the same position as I have one 1 year old black australorp, She has been in quarantine quite a while, 4 months to be exact, combating a CRD which is not responding to antibiotics. Now we are misting her with oxine on suspicion of it being a fungal infection, and she seems to be slowly improving! When she's symptom free she'll be in the dog crate next to the chicken coop (my other 3 chickens free range)
I just got 8 hens 7 of them are about 8 weeks old and the other is about 12 weeks. I found some more hens to get, a 5 or 6 week old legbar and two 13 week old ameraucanas. i figure the ameraucanas will be bonded becasue they are both coming from the same place. im more worried about the legbar since she will be younger then the rest and new. i also dont have a cage but i have two coops and one run. but i will need to put two of the other hens in with the three new arrivals. my first idea was to put my faverolles and my australarp in with them but im a little afraid that the ameraucanas will pick on them, i then could put my wyandotte and sussex with them but im afraid the legbar will get picked on. I currently have a barred rock, sussex, wyandotte, easter egger (the older one, 12 weeks), faverolles, golden comet, australarp, brahma. which two should i put in with the new arrivals?
Found this VERY INTERESTING since just today I'm debating if I should get this single white AM pullet (6 mos) & attempt my first integration to my "flock" of 4 Buffs (16wks). The person that has the AM separated it from her flock as it's been pecked on, neck feathers missing.

I thought of putting it in a wire crate in the middle of my enclosure during the day, then securing the cage on the corner roost (highest) at night. My buffs roost on the lowest on the other end of the enclosure, or I could also bring the lone girl in as my "brooder" is huge with roosts.

Still thinking but I believe in "signs" and this popped up

Glad it worked out for Edith and you!
Great job!
That’s great!!! I recently got a new bared rock and tried to Integrate her into my flock and it hasn’t went so well, she is smaller than most of the others and younger, I have her in a separate small
Coop next to the rest. She cries and whines at night because all she wants to do is snuggle with the others but 2 of my older chicks just won’t let up on her. It hurts me so bad, don’t know what to do. I don’t want to keep her separate from the rest of the flock but for her safety I have to.

Read my article on outdoor brooding. Look for it under my articles on my profile page. It has everything you're looking to know.
I have 5 week old Golden Sexlink chicks, who look pretty much like Edith!
You must log in or register to reply here.