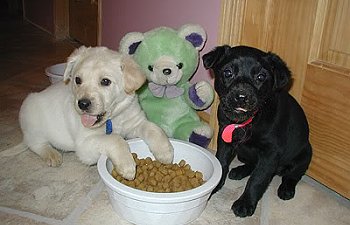 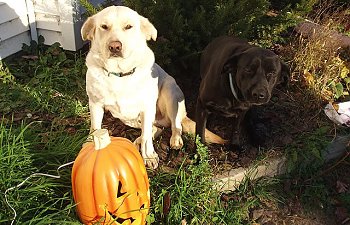 Next came the ducks and geese every spring, beginning in 2004. Our local fox and her kits ate most of our ducks each year until we finally fenced in a large area. We dug a little pond for them too. Here is a photo of our first Goslings when they were a couple weeks old.​
​ 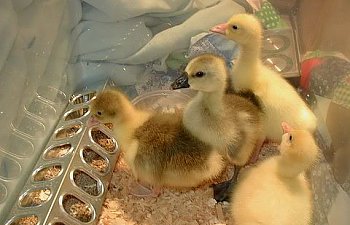 ​
Here is a photo of Rolie and Odd Ball. We named her Odd Ball because she had a pink beak and pink feet. All the other geese like her had both black beaks and feet! 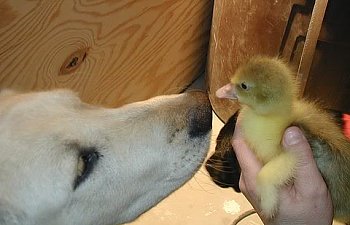 ​
From the beginning I taught Rolie and Drew that any furry animal was MY baby and not to be eaten! They may get into a lot of trouble for mischief, but I am very proud to say that Rolie and Drew have NEVER eaten any of Mommy's babies!

The summer of 2007 our oldest son, then 9 yrs old, kept asking if we could have chickens. It was too late to start raising chickens in Northern Minnesota for the summer, so I told him we would "next year".
Well, "next year" came and he had not forgotten what Mommy had promised! So, I took him to our local "feed" store and let him pick out 8 pullets. He is mentally impaired and I was hoping he'd learn more about responsibility, and caring for animals, due to the chickens. I am blessed to say that raising chickens HAS helped him! It is his responsibility to check for eggs at least once a day. On weekends and non-school days, he probably goes out and checks a half dozen times! It's pretty funny because right now we only have three chickens laying!​ 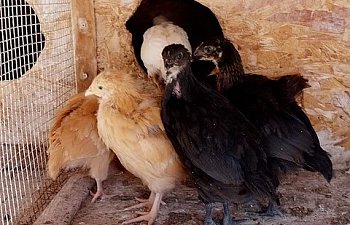 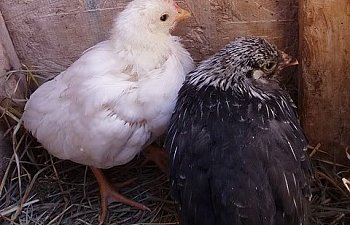 ​
By the time our 8 Pullets were six weeks old it was very apparent that we really only had SEVEN pullets! To make matters worse, when they were about 2-1/2 months old a weasel got five of them! I ended up with a White Leghorn cockerel and two pullets - an Australorp and a Buff Orpington.
By the beginning of May, 2008, I had fallen in love with Bantams. I purchased several from the "feed" store. I learned a hard lesson right away... Bantams are delicate creatures! Although choosing a chick because it is the smallest and looks like it needs the most loving sounded like a good idea at the time, I realized that those babies were NOT the ones to purchase because chances are pretty high they won't make it. After a couple purchases, a couple replacement chicks, and one saved chick, I ended up with 9 assorted Bantams - 8 Cochin's and one Rosecomb.​ 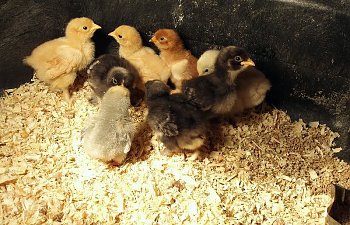 ​
By the time my three Standards were 14 weeks old, I knew I needed more Standard pullets! I ordered six more through our local "feed" store and received eight. I know, I know... extra ones are usually cockerels, but somehow I lucked out and not only ended up with two FREE ones, but they are ALL Pullets! YAY! I have 2 each: White Rock, Barred Rock, Production Red, and California White (they were suppose to be Leghorns). 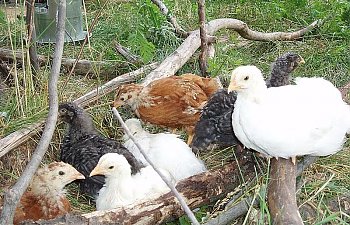 ​
At this point I realized that seven out of my nine Bantams were cockerels. Talk about crappy luck! I found Ideal Poultry through BYC links, so I placed an order for five different Bantam breeds... three chicks per breed: Blue-Red Old English Game Bantams, Golden Sebrights, Blue Wyandotte, Sultans, and Self-Blue Cochin's! (When I get obsessed, I really get obsessed! muaahhh haaa haa haa) I ended up losing one of my Sultan's.​ 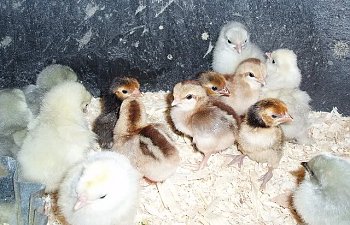