Article Gallery
Leave a rating
[FONT=arial,helvetica,sans-serif]
[FONT=arial,helvetica,sans-serif] Long story short! I said I was never going to use an incubator to hatch eggs. Then I was given a Hovabator with air circ and a turner (FREE) and I said to myself " I should see if it works" and there was the beginning.[/FONT]​
[FONT=arial,helvetica,sans-serif]First hatch: was mutt eggs from my newly aquired laying hens.. When I collected their eggs they had not seen a roo in 18 days. So I did learn that they do stay fertile for at least 18 days or longer. Out of 8 eggs collected 3 were fertile , 2 hatched a day early and the third I oopsied and cracked open on day 9 to find a little chick pic below. That mistake talk me what I was looking for though in future hatches. That was a green egg and I could not see anything in it. ​ 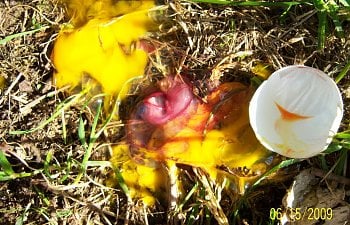 almost 5 weeks old.. and looking rooish to me
Since this hatch I believe they are both roos.. and the barred rock/EE is not very friendly since day one. My RIR/cochin chick is getting a red comb and waddles, still keeping my finger crossed he is a shie.
Second Hatch: this hatch was more relaxed and went very well. Only added water every couple days if it fell below 25% , trying the dry hatch kinda..LOL I put 10 eggs in the bator. One RIR egg died (I put it in upside down). A EE egg had a crack when I candle it so I tossed it, but it was alive. 7 outta the other 8 hatched and are all doing great. The 8th egg I opened to find a full sized living, breathing chick that had only 1/2 its upper beak and a deformed head. I wrapped him back up and let die, never did hear a peep from him. Dad to all is a blue andanlasian and moms were a Barred Rock, Buff Orpington and a EE.

All dry and in the brooder waiting pickup, they are more yellow tinted cuz of the lightbulb. I went out to see these little guys and girls.. they are all doing great.. the creamy/khaki I can't wait to see feathered out.. interesting.
3rd Hatch is in the works. I shipped in lavender orp eggs. I hope the bator works as well as it did the first two times. I put the eggs in the bator on July 29th, I candled at 4 days old and they are looking hopeful.. Most look like they are gonna thrive. I have 2 that have nothing in them and broken air cells I think. I'm not tossing any at this point however.

and my lavender orps at 4 weeks old... 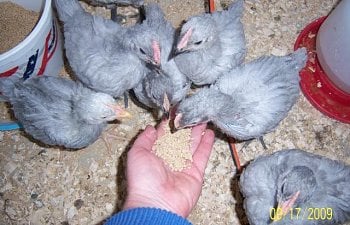