Possum - Chicken Predators - How To Protect Your Chickens From Possums 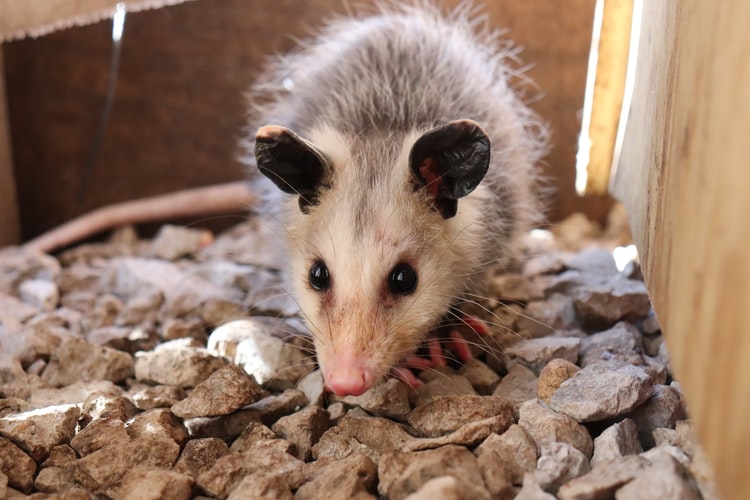 The possum is North America's only marsupial mammal. (The female has a marsupium in which she carries and nurses her young until they are 2-3 months old.) Mature possums are roughly the same size as a cat, has grey to black fur, black eyes, pink noses, feet and tails, black ears, and pointed noses. Possums (also known as opossums) are usually slow-moving, nocturnal animals. Gentle and placid animals who prefer a quiet solitary life, may growl, hiss and bare their teeth when threatened and will sometimes, when frightened and unable to flee, fall into a shock-like state, known as "playing possum".

Though indigenous to Australia, Sulawesi, and New Guinea, possums are also found in eastern, central, and west coast states of North America, as well as some parts of Canada. They are absent from the Rockies, most western plains states, and parts of the northern US.

Possums as Chicken Killers can be a problem for poultry owners as they prefer hunting at night and may never be seen during the day. Hens often do not survive a possum attack. The possum's razor-sharp claws have been known to lacerate their necks and bowels—leaving them to bleed to death. When possums gain access to chicken coops, they will prey on and eat the adult chickens and the eggs and they also like attacking and eating the young chicks.

Possums are attracted by pet food, windfalls from fruit trees, rubbish bins, bird feeders, and chicken coops. Make your property unattractive by keeping garbage bins shut and secure, taking pet food bowls in at night, and regularly pick up windfalls under fruit trees. Possums are very easily deterred by light and noise. Christmas lights have proven to be particularly effective in keeping them away and keeping your flock safe. During the day, leaving a radio playing near the chicken run and coop's entrances will also help deter them. Also, make sure your hen house latches and locks are properly locked.

Another very effective way of keeping them away from your backyard chickens is by placing empty tins with ammonia-soaked rags inside around the perimeter of your coop and run. Punch holes in the tins and keep the tops sealed. Possums are very good climbers but can be prevented from climbing over hardware cloth & wire mesh fences by installing a tightly stretched electric fence wire near the top of the fence 3 inches out from the mesh.

Humane, live traps would help if you have an existing possum problem. If you caught a possum in your trap, contact your local game warden or wildlife control office for assistance. Please note it is illegal in many states to relocate possums.

The Possum ranked number 8 in our Worst Predator Poll! This list includes Raccoons, Weasels, Bobcats, Hawks, Rats, Coyote, the Fox, and more. Take a look at the results here!

For more discussions on other predators and how to deal with and deter them see the Predators and Pests section of the forum.

I always find helpful answers in this page
We’ve had opossums, and we just rattle the door and they disappear. We put up a motion detector light, and we’ve not seen one since!
Reactions: Hensintexas, SuperWhoLockian and penelopebianchi
Helpful article about protecting poultry from possum attacks
Reactions: Hensintexas
Read more…

This is the most misunderstood animal of all time and yes they will kill your chickens and eat the eggs but they are following their instincts. Examine the flaws of your coop and fix the problem and the opossums will go away ~ they may hiss at you when caught but they are a very peaceful animal. Calling a game warden will most likely end in death and that is so unnecessary.
I concur! However. I am wondering...after much research and of course I may be mistaken... Has anyone seen a possum kill a chicken...perchance with a game cam?

I know people find the tell tale eating pattern, however, possums are generally not "attackers" of larger live prey.

They are, however, known to eat carrion. I wonder...

If a fox or coon or weasel has been through, and done the killing...an opposum comes behind and does the eating....they get the rap.

From everything I have read, they are all about an easy meal, if chickens are locked up properly there should not be an issue with this, "predator".

Thoughts?
I live in Virginia in a valley near the river where there are many animals. My neighbors failed to close the door to their coop one night. They heard a terrible noise, went out, found a possum curled up with the hens. Their rooster was fighting to protect the hens and in return the possum bite his backend several times and he lost his tail feathers. They killed the possum. Recently another woke them trying to get in the coop.
Possums are present in Macomb County, MI. One surprised us on New Years Eve a couple years ago-it dug through and made its way into our old house which has dirt floors in the basement! Watch out for the crafty little buggers.
Pretty sure an opossum took a few last night. The dog caught him this afternoon, and I smashed it's head in with a rock. Does anyone know if they leave any parts of the bodies or consume the whole thing? I followed the feather trails and only found piles of feathers...
We saw a possum try to kill our chicken, but scared it away just in time. Friend of ours had possums frequently coming in to their coop and killing chickens. More then once their dog woke them up and they caught a glimpse of it dragging a chicken away. Once, the possum brought her whole family and 3 chickens died.
Let me add to what I said. 63 chickens died in the end.
A Opossum killed every bird I had except one died before we ever had that problem.. This is helpful! I might go away for a couples of nights in a few weeks.. I guess I'll try keeping a radio near the coop.. Do u think that will work?
This is false information. I ran a licensed Opossum Rehab facility for years. I and many of my cohorts let our opossum be in with the chickens, they DO NOT KILL CHICKENS, this is fabricated. They will eat the eggs, but they DO NOT EAT CHICKENS, (ever.) It would pay to actually research before you post false information. If you are getting your nonsense off of Google or Wikipedia, you might want to do real research.
The single exception to this rule is if they are starving, and even then it's rare.

justjoenhix said:
This is false information. I ran a licensed Opossum Rehab facility for years. I and many of my cohorts let our opossum be in with the chickens, they DO NOT KILL CHICKENS, this is fabricated. They will eat the eggs, but they DO NOT EAT CHICKENS, (ever.) It would pay to actually research before you post false information. If you are getting your nonsense off of Google or Wikipedia, you might want to do real research.
Click to expand...

False information huh? I just ran out to my chicken coop when I heard a chicken screaming in the middle of the night. I came out to find a nice, big opossum with my full sized hen in its clamped jaw. Multiple deep puncture wounds with internal abdominal hernia...I don’t suspect my poor hen to make it through the night.
I agree with silky4. Justjoenhix...I appreciate what you’re saying but witnessing an actual possum mitigating your chickens tends to dispel your confidence in possums never kill chickens. In fact, in our neck of the woods in La, it’s extremely common for them to kill, mot often severing their heads, and leaving them. We’ve seen it with our own eyes and we aren’t out to punish these possums. In fact, they are usually found eating with our cats, even before dusk, especially very young ones that don’t quite know they are typically nocturnal yet. We don’t get aggressive with our deterring methods until we have proof they are the aggressors. We are by nature lovers of all types of animals and understand this is their nature, at least here, but they have plenty other means to feed themselves and no reason to kill our chickens and leave them for us to find the next day. We have possums who even take advantage of small kittens who can’t protect themselves yet. They’ve wiped out an entire new litter before we could get outside to stop it. I’m willing to try any non-lethal methods and I know radios keep the coons at bay, so seems logical the possums might stay away as well. This is a regular Noah’s ark here but rarely do animals in captivity OR in a habitat behave the same as if they were in the wild, fending for themselves. In my opinion, it’s also not wise to apply the same personal knowledge to all species of opossums and/or different geographical locations. I always say...firsthand knowledge and eyewitness experiences trump what the books say are the “norms”.
Sorry...*MUTILATING, not mitigating.
I too love all animals and do all I can to allow all creatures to live their lives. I too have seen a possum attacking my adult chickens.... found the breech location and fixed it. My chickens free range from sun up to sundown and to be a responsible chicken parent, I make sure to count the chickens and lock up the coop at sundown as soon as they all go to roost. I also do a safety inspection of the coop structure each afternoon/evening. I haven't had issues in years because I collect eggs several times a day and while the chickens are free ranging, I move the feeder out of the coop and put it under their favorite tree. I move it back in the coop after the nightly count and coop inspection. All that to say, I know that nothing is fail safe but taking reasonable steps to protect the chickens in my care is my responsibility. "Predators" are just following their instincts of survival.

justjoenhix said:
The single exception to this rule is if they are starving, and even then it's rare.
Click to expand...

this is what I thought, but it is NOT true. We have seen possums eating the chicken food in the run and thought “oh as long as there’s food they won’t bother the chickens”. Well two nights ago I heard my chicken screaming and saw a possum attacking her. We scared it off before too much damage, but are not sure if the chicken will make it. This is the second chicken this year. One of our chickens got out of our yard a couple months ago when a delivery person left the gate open and neighbors watched a possum drag it across the road. They tried to save the hen and brought her to us, but she was sliced open and didn’t make it.
A possum kill and ate two of my favorite chickens. And kill three weeks old chicks. I saw it on the camera I set up after the second one disappeared.