The History and Mating Behavior of Pigeons 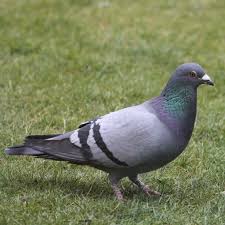 Pigeons. When the average person hears this word, most likely the first thing they think of are the hybird "city" pigeons developed through cross-breeding of the Rock Dove. To the average birder, perhaps a Rock Pigeon (Rock Dove), or Mourning Dove, or to ornithologists, the clade of Columbidae, which is a higher classification of pigeons and doves, comes to mind. But to a poultry enthusiast, whether they raise pigeons or not, they usually recall what they heard or seen of the beautiful assortment of colors and breeds, and the amazing acrobatics that pigeons can perform in the air, or on the ground. For 4,000 years, pigeons have performed many useful functions for mankind. Some of the varieties have been selected for fancy colors or forms. Others for their endurance and homing instinct. Not only do pigeons possess a range of skills and beauty, but are relatively easy to cared for, and can be kept in populated areas. They are easily tamed, don't smell, their noises aren't loud or harsh, are hardy and adaptable, inexpensive, and require little space. Pigeons have a long, colorful history in the service of men. Breeders' efforts at breeding and selection have given us a huge arrangement of pigeons with different colors, sizes, shapes, and talents.

Perhaps the most widely known role that pigeons have played in history, is that during warfare. These pigeons, known as "war pigeons", played an important role during battle. Due to their homing ability, speed, and altitude, they were used as military messengers, delivering messages to the army. 32 pigeons in total were decorated with the Dickin Medal. War pigeons ceased to be used in 1957. Pigeons are also employed in rescue work, and have been used to carry messages from ships to nearby land areas. They have often been used in "underground" movements and people engaged in rebellious activities, where other forms of communication could be traced.

The sporting category of pigeons is one of the most popular show classes for pigeons. It includes three general breeds whose names indicate their ability. They are Rollers, pigeons that roll in flight, Tumblers, pigeons that cannot fly, but tumble across the ground in a series of somersaults, and Homers, pigeons that possess the homing instinct. The next category of pigeons is the utility breeds. These breeds are specifically bred to produce meat. Mature pigeons are never processed as meat birds, as their flesh is hard and their body weight is low. Instead, baby pigeons, called squabs or squeakers, are taken from the nest at 28-30 days of age to be sold at market. At that age, they are at their maximum body weight, and their meat is tender. Breeds in the meat production class include King, Carneau, Mondain, and Hungarian. The final category for pigeons is the exhibition and fancy class. Pigeons in this class have unique, identifying characteristics that give them advantages in show, such as frills, feathered legs, large breast, fantails, etc. Breeds include Fantails, Jacobins, Modenas, Frills, Pouters, Owls, and Trumpeters. Some pigeon fanciers believe that pioneer aviators learned to do many of their flight maneuvers based on observing pigeon. Feats such as loops closely resemble the movement patterns in the flight of pigeons.


Mating and Brooding Behavior of Pigeons

Pigeons are monogamous; they generally mate in pairs and remain together for life. After a pair has gone through the courting stage and have mated, they are ready to build a nest and have squabs. The pair will remain true to each other as long as they live or are allowed to remain together. If a mating pair is broken by the death of one bird or by separation, the birds will mate again with other single birds. Birds which have mated can be shipped long distances without breaking the bond, however, a pair occasionally breaks their mating from relocation, or the influence of unmated birds around them.

In providing nests, at least two nest for each pair of birds should be provided. This should be done for the reason that pigeons generally have at least two broods of squabs, and having two nests allows the pigeons to give sufficient care to each brood of squabs and/or eggs. The nests should be approximately twelve inches square that can be attached to the wall. A three-inch long perch should also be added to the nest boxes. A good supply of nesting material should always be in both nest boxes. These may be straw or hay, but the best material is tobacco stems, which prevent insects from the nest, and can be purchased from pigeon supply stores.

The breeding habits of pigeons are unique. After a cock has selected a hen he desires for a mate, a course of true love-making follows. The cock struts around his favorite, coos to her, and eventually tries to show her what a grand bird he is. The hen, if attracted, becomes friendly with him, and the two "bill" each other (as though they were exchanging kisses). The two then select a nesting-place and build a nest. At this time, the cock becomes very anxious for the hen to lay. If she does not promptly begin, he will drive her into the nest, reprimanding and striking her with his wings. Finally, the hen goes to the nest and lays an egg. She then skips a day, and lays another. Incubation begins immediately after the first egg is laid. The hen sits on the egg from about 4:00 in the afternoon to 10:00 the next day. Then the cock sits on the eggs while his mate eats and rests. At the end 18 days, the first egg hatches, and then 24 hours later, the second egg does. Thus, the first squab is a day older and often larger than the second squab, and will attempt to dominate the other, depriving it of food.

The parents immediately begin to feed the young and they grow quickly. The parents feed the squabs "pigeon milk", a fluid that is a combination of secretions from the parents' crops and later of partially digested food.

After several days, the hen begins to lay again, and the parents are kept very busy with two nests of young to care for.

At four weeks of age, the squabs are as fat as they shall ever be in their lives. At this time, they are sent to market, or if not, the parents will push the squabs out of the nest, and they fall to the floor, so fat that they can barely move about. Soon, they become lean from learning to find food for themselves and become sleek and trim, rather than fat and awkward. It sometimes happens where a pair of pigeons cannot produce young. This is because of one of the birds is barren, or that they are infertile, and unable to reproduce. In this case they should be separated, and each furnished a new mate.
Reactions: Con Joy and Crzytrkr

Good basic information, and some great photographs.
Very good read and information on pigeons. As a non keeper of them I found it very interesting.
Very informative Article. I love the pictures.\!
Read more…

Great article! I started with rescued squab, unable to release him because from his fall he received a broken beak. Also, even though I let him free fly aroubd, he always came home. So after a year, I purchased one, hoping it would be female, as it was not of age and it turned out to be one! They have successfully raised their first baby. I am thinking it is around 4 weeks old at this point. I did not realize they would kick it out, so to speak, I am looking forward to this next step! Thanks so much for the information!
You must log in or register to reply here.