It finally happened we lost our fist chicken ever. The weird thing is she was just dead, I couldn't find anything wring with her. No marks, blood or anything. The girls were all clucking around doing there thing and there was blondie stiff as a board behind the chicken tractor. The only thing different was they had the left overs from our dungeness crabs yesterday. Could the crab have been bad for her? Should I be doing anything as a precaution for the other girls? I almost wish a cat had got her so at least I knew what happened. Know I'm worried if maybe there girls have a disease, was the crab bad, was it some kind of predator? What do you guys do when a chicken just dies for apparently no reason? 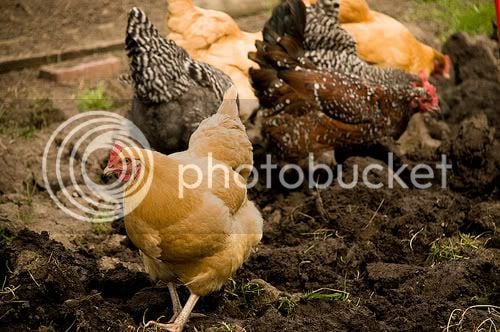 Awww, poor Blondie, she was a pretty hen. I also have a Buff O named Blondie. Was your Blondie much older than the other hens, had she laid a lot more eggs? It could be she just wore herself out.

Otherwise, it could be that she either ate something bad that the others did not, or she was unusually sensitive to something they all had eaten. I don't know about anything bad for chickens with eating crabs, others here may know more. Perhaps she swallowed a sharp bit that the others avoided.

If you can manage it, you could open her up & do some investigation, or have a vet do a necropsy but that would cost $$$. If Blondie hadn't shown signs of illness before, and the other birds aren't acting ill now, then there probably isn't much to worry about with disease.

Bury her under your favorite tree or shrub so she can live on helping it grow. Sometimes these things happen & though sad, just cannot be avoided.

Sorry to hear of your loss. We lost our first hen about a month and a half ago, seemed like she must have been eggbound, the rest of the hens were fine. Last week we lost our second girl, but she seemed fine, no marks, no stinky smell, she was just lying there straight out and stiff as a board. I don't know if the crab you gave your birds would have done it, but I would keep an eye on your chickens just to make sure . Sometimes they just die of no apparent reason. It's weird, I wish I knew what my second one died of, maybe it was a heart attack or something.

Blondie was young less than a year old, ten months old to be exact. We buried her today not that I'd be able to cut her open anyway.
I must have jinxed us. I was just thinking today how lucky we were not to loose a single chicken in our first batch of hens.
I should have found some wood to knock on. Somebody said chickens are born looking for a way to die. I think there may be some truth in that.
It was sad putting them to bed tonight the perch looked so empty with one missing.

Our girl that died last week was 10 months old too. We were thinking the same thing too, that we had been lucky to only lose the one a few months ago, then the day after we said that, boom, we had another one dead. We should have knocked on wood too! We are waiting for the ground to thaw out than we are going to bury her under our apple tree where we have one dog and 2 cats buried there. Funny, our girl looked alot yours did too, we named her granny( well my kids did, I don't know why they would have named such a young chicken granny though)

We too lost our first ever saturday. She was a B/O that was egg bound. Last night I found myself doing the nightly head count four times forgetting that the new number is 17 now not 18. It was then that it really hit home that one is really gone. We all do our best and nature does the rest. At least everybody's chickens on this web site are better cared for than all the chickens people see in the supermarkets.

B
Quiet/lost voice but no other symptoms - what to do?
2