I've got 7 chickens and 4 ducks, the chickens range from 8 to 16 weeks in age and the ducks are all 4 weeks old (2 Rouens and 2 Pekins, 1 male and 1 female od each). The male Pekin took an early lead in growth and gaining weight compared to the others and quickly started to become pigeon toed, however other than stepping on its own feet and tripping more than the others it was doing fine. The ducks were in the house until about a week ago and then I moved them outside in a temporary coop with the chickens. Again they appeared to be doing fine, however they were only in the coop with the chickens for a few days before I had to leave for 6 days on a business trip. There was someone still home, so they always had plenty of food an water. Before I left, I put the food and water containers on a shelf piece from a plastic shelving unit I got from home depot. I did this to make sure the food stayed dry and so that if they pooped it would fall through the shelf onto the grass below.

We I got back, the male Pekin which had been the largest and heaviest of the ducks was now the lightest and appears weak and under fed.

Is it possible the with it having the pigeon toed feet that it was having trouble getting food and not eating enough?

It's 4 weeks old today, should I be concerned about the pigeon toed feet?

Is there anything I can do to encourage it to eat more to get its strength back?

Should I be watching out for anything?

Any advice would be greatly appreciated. For now I've removed the plastic shelf pieces, moved the temporary coop to my cement patio where I can rinse of the floor when it gets dirty. I plan on building a larger, more permanent coop this weekend.

Post a before & after pic if you can so we can see what's going on. Makes it easier to give recommendations that way.

I don't have any pictures that I can post at this time. I will try to take and post some pictures tomorrow. I've also noticed that the Pekins droppings are thick, perhaps pasty and the Rouens droppings are thin, watery; though I don't know how significant that is, the female Pekin seems just fine, growing and gaining weight, it's just the male Pekin that I'm concerned about.

I would say pull him out & feed him separate for a few days (just during feeding time) & watch him to make sure he is able to eat & drink ok. Once you are sure he's ok there, check into adding some vitamins & electrolytes to his food & water when you feed him separate. Not sure what type of feed you are using but sometimes a niacin deficiency can be the cause of leg problems. Maybe try adding a bit of brewers yeast to his food.

What kind of feed was he on before you moved him to the coop? Did you change his food when moving him to the coop? Have they gotten an opportunity to bathe or dip their entire head in fresh clean water? Do any of the others appear to pick on him? How about any of the chickens?

Here is a link to info about leg problems in ducklings please read: http://metzerfarms.blogspot.com/2011/03/are-my-ducklings-leg-problems-due-to.html might be able to help his pigeon toes. I would deff add some kind of poultry vitamins to his drinking water. Poultry Nutri drench is a very good one... link about it. http://barnyardsandbackyards.org/2010/09/18/review-nutri-drench/

Here are some pictures of the duck. He's just over 4 weeks old. I also took a short video of him walking, intending to post it, but I'm having problems posting it. I don't know why, however the pictures and text in the post above do not display in the order I entered them

Looks like he has some leg problems that may be related to niacin and/or thiamine deficiency (just a possibility). I am not picturing your setup very well (extremely tired). Is it possible he could not get at the food?

I agree with Nsampsel, watch closely, make sure he is eating. Thick poop might be a sign of dehydration. I would not wait to give some vitamins with electrolytes and probiotics, as it is a good idea with ducklings in any case.

My first guess would be niacin deffiniency. I know alot of people like to use yeast but I like the liquid vitamin B method I read about on Metzers site. I bought a bottle from Walmart for like $5 so I would have it on hand just in case. 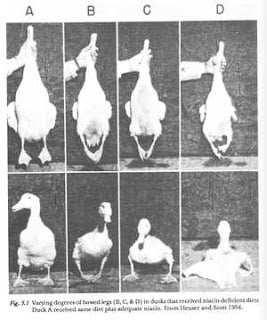 A series of pictures from the book, Nutrition and Management of Ducks, with permission of the authors, showing a normal duckling (A) and ducklings (B,C,D) that were fed Niacin deficient diets.

May 2, 2021
cortmsp7
C
A
Do ducklings chirp for their owner’s attention?