So, i have been stalking different pages of this site that pop up when i am searching for things about my chickens. Finally decided to join and post.
I had a beautiful red black laced wyandotte rooster. His name was Bantam, he was huge, mostly quiet(he didn't crow often, but when he did you would hear it). My dog got a hold of him on mothers day this year, he didn't survive the ordeal. After he died, I allowed one of my 5 hens to go broody and hatch a clutch of eggs from him.

The resulting clutch has been really interesting. Figured you guys might like to see them. They hatched 6/11-6/13 There were 9 total.


This is the father of all the chicks. Red/Gold Laced Wyandotte 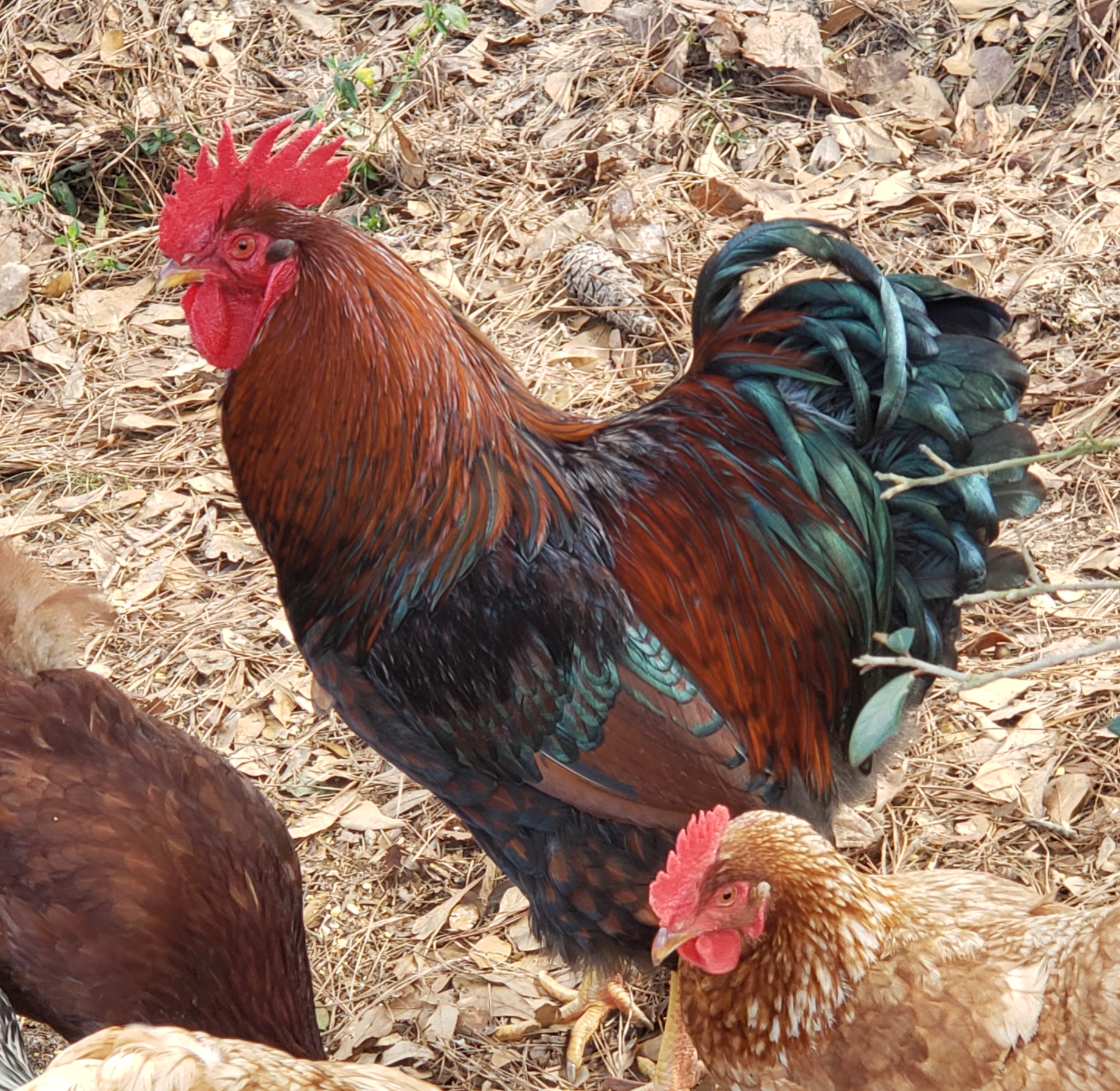 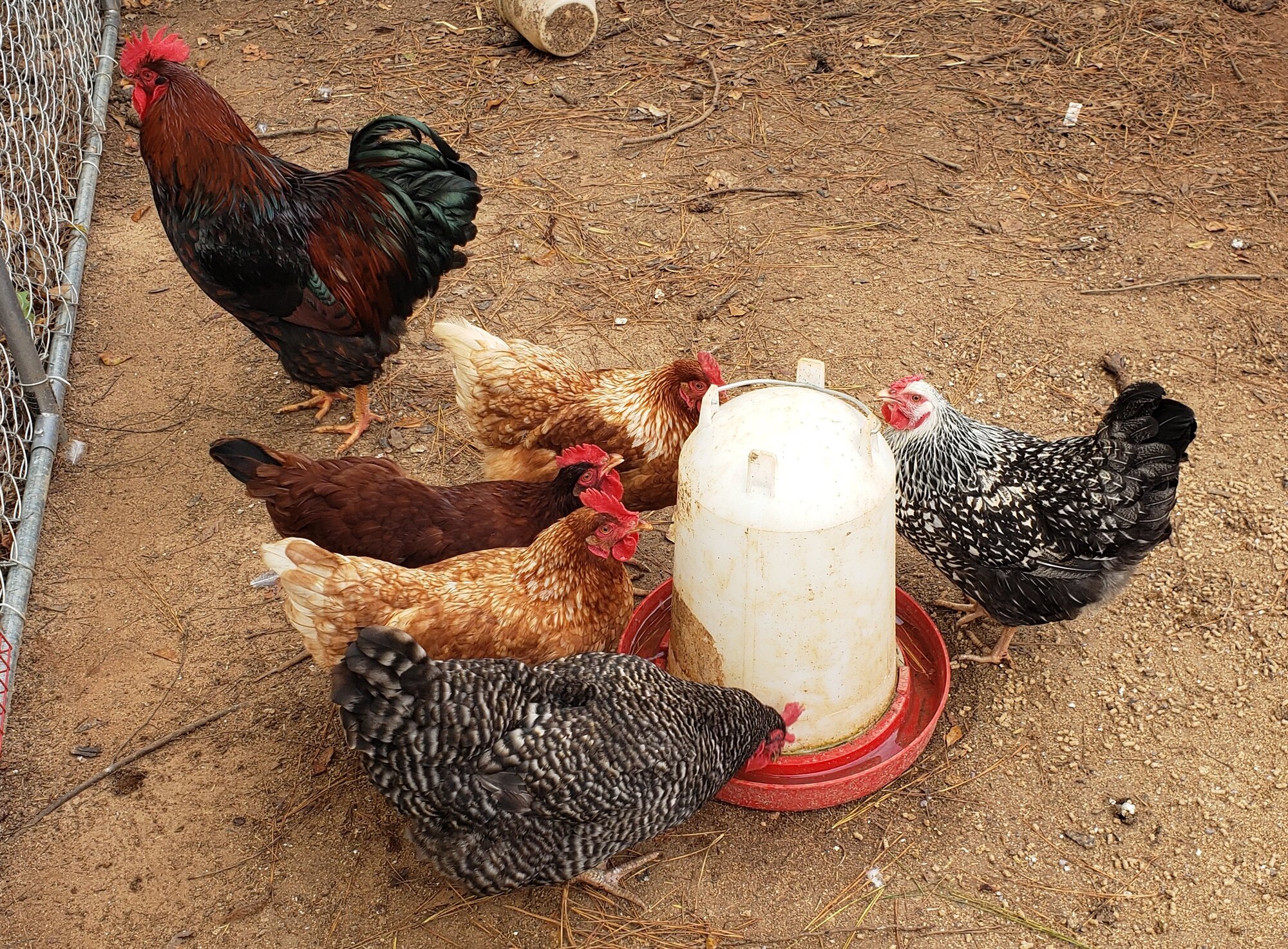 These are 5 of the 9 babies. One of the gold ones, whom i believed was a hen, liked to wander from momma, she died to a dog as well. 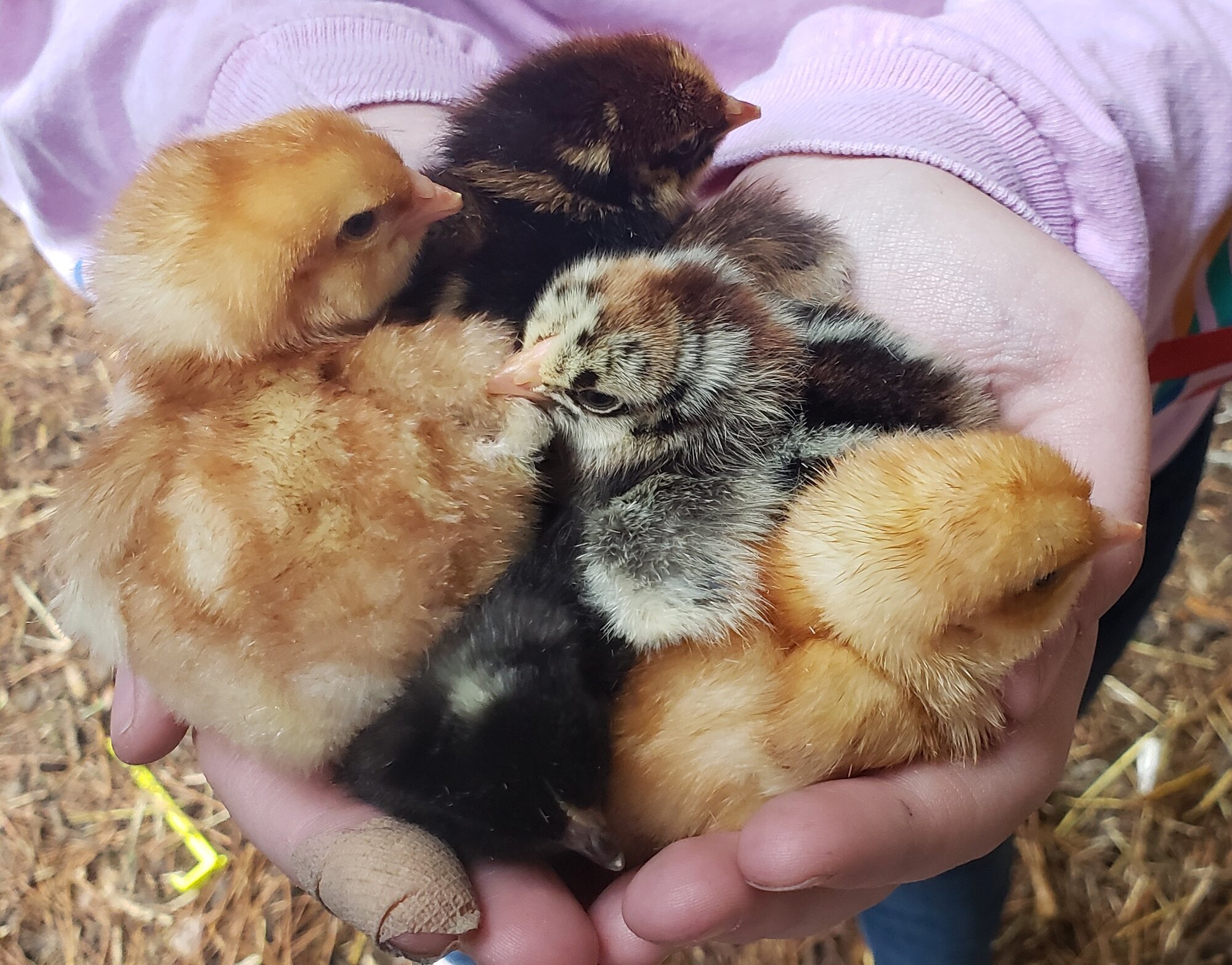 This photo was taken July 17th so they are little over 4 weeks old here. Can really see which hen they came from. My guess is 3 from silver wyandotte, the gold laced is a pullet while the two silvers are cockerels. Two from the barred, the one that is barred is male, while the solid black is female, the two brown ones 1 pullet and 1 cockerel, the red and white i believe came from one of the comets. Feel free to correct me. 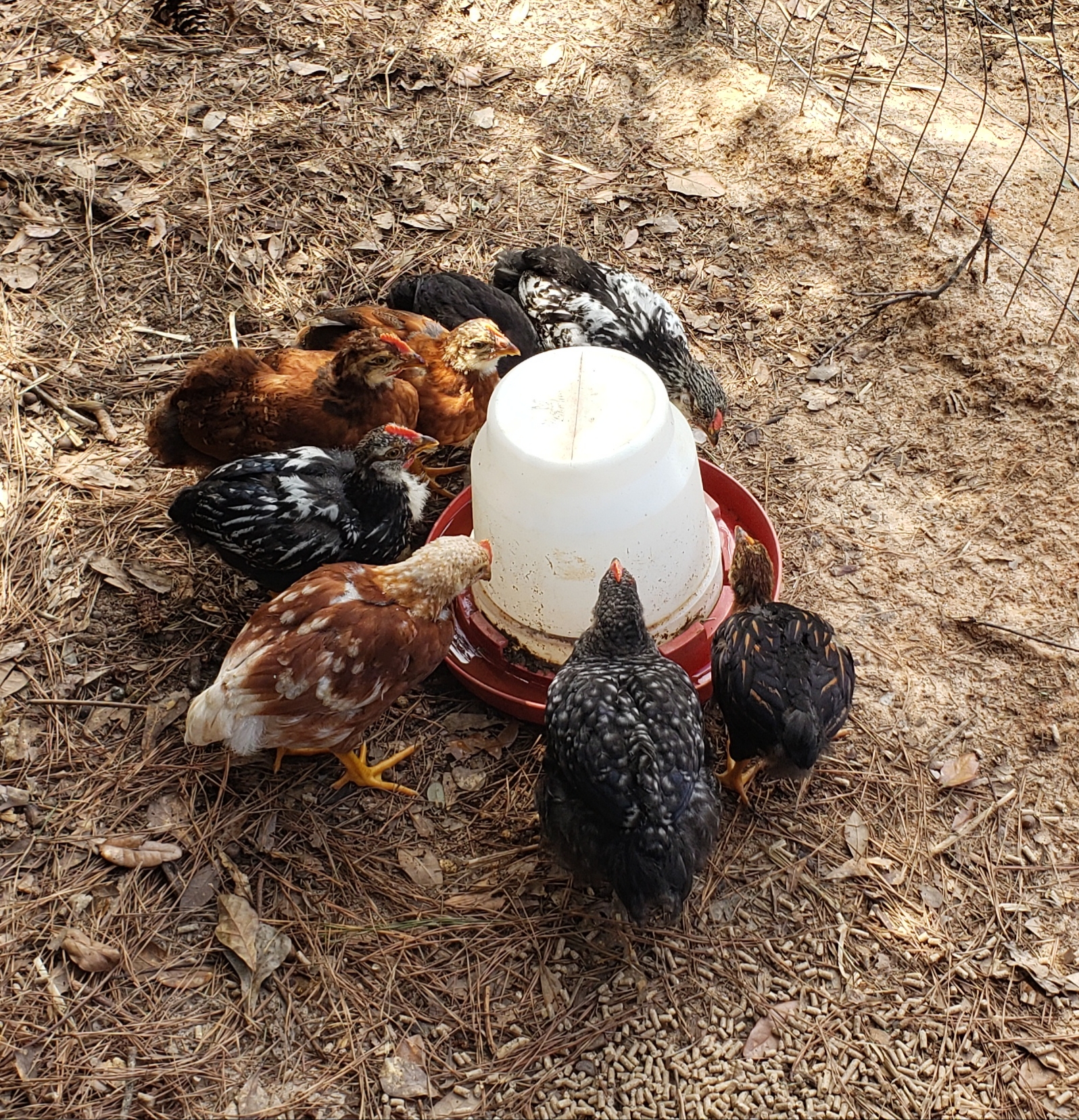 This is the RIR/Wyandotte cross (I think) pullet . I call her Turkey bird with good reason. Was taken on July 9th. Now that she is older, her feathers look laced, the centers are a light tan and the outer edges are more brown. I'll try to get a better photo of her, her butt/thigh feathers are a dusty grey/blue. Not sure where that came from. 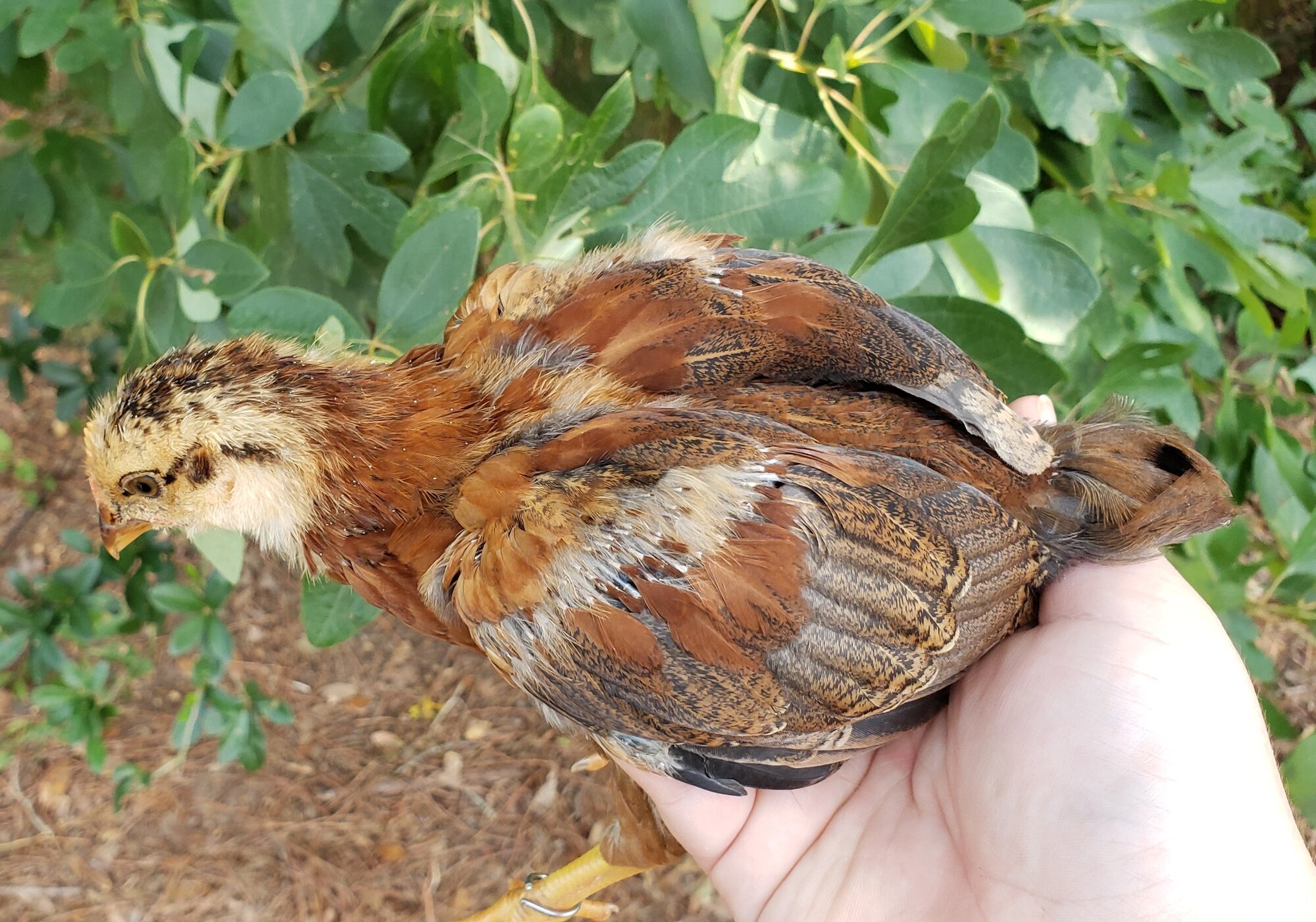 Two of the boys. A silver Laced wyandotte, and the Golden Comet/Wyandotte cross. Im guessing on the GC cross but his head looks like the two hens. They are also the only ones with red and white feathers, but his pattern is strange and keeps getting weirder as he ages. His body is red tipped feathers with fluffy white down and his tail is white that turns red closer to his body. The saddle feathers coming in are blood red. 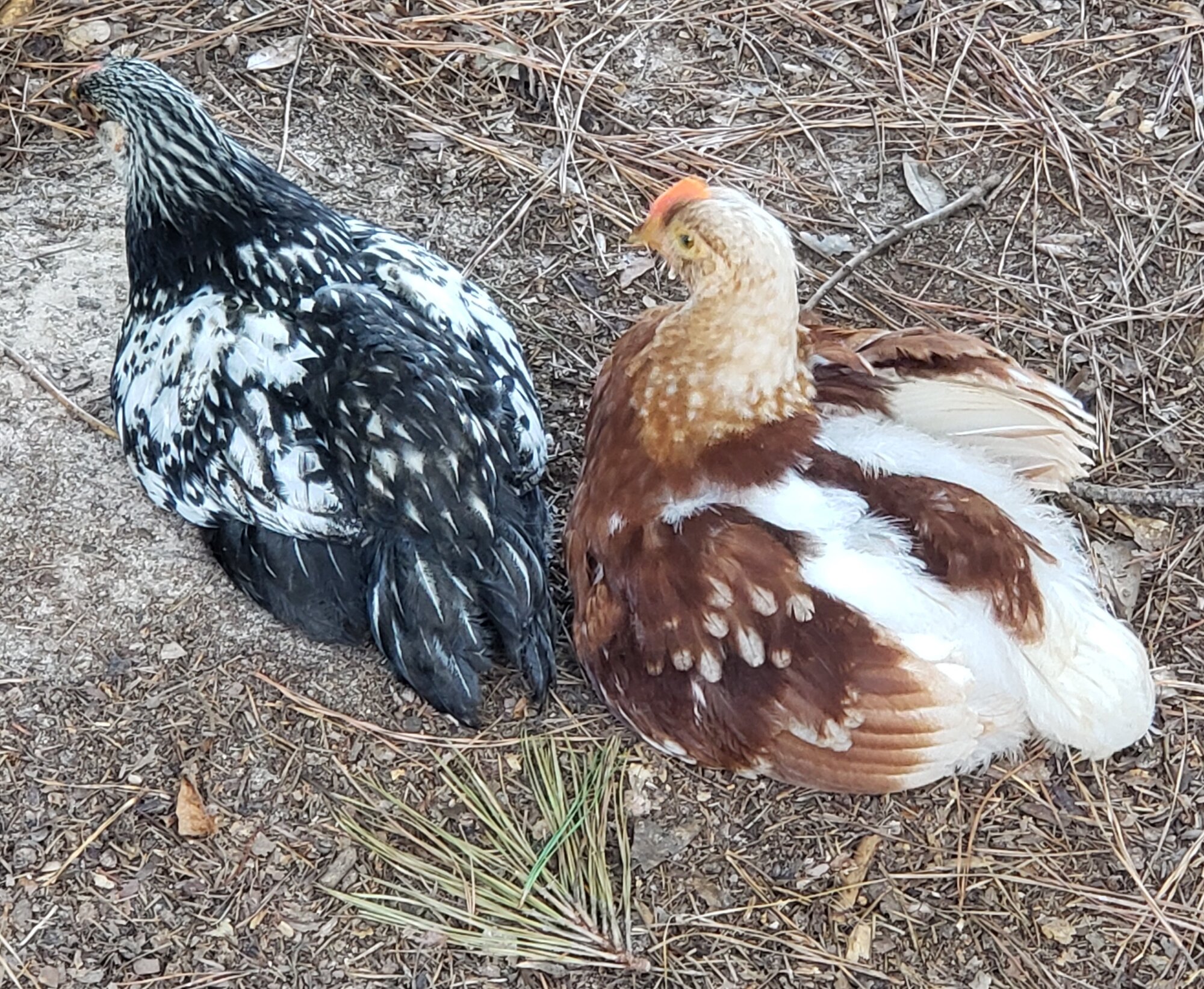 This is my favorite little keeper pullet. She looked like a penguin when she hatched and turned solid black with iridescent purple and green barred feathers, which are really difficult to see in a still photo. Photos do no justice for how colorful she really is. Her feet are also very interesting, they have changed as she as gotten older, but when she hatched her feet were solid black with only the middle toes being yellow. She is out of the barred rock hen. 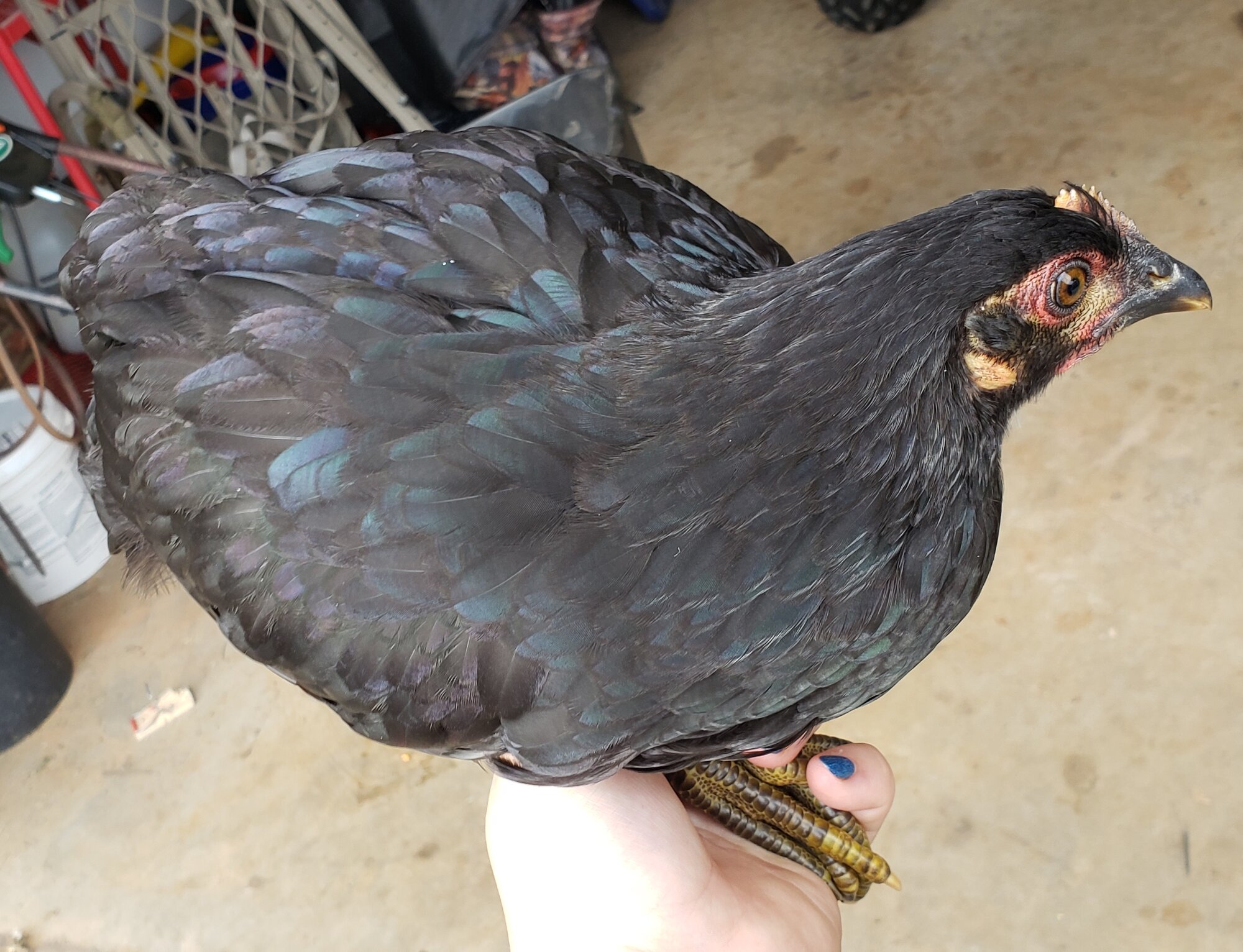 5 of the 7 left. One of the silver laced ones decided he wasn't going to roost with the rest of the chickens one night, and well, He is no more.
The gold laced is the only female out of the 3 wyandotte chicks. It was interesting to me that the boys were silver like their mom, but she is gold similar to her red father. She is also extremely iridescent like he was.
Can also kind of see "Turkey Birds" 'lacing' and a bit of her grey thigh feathers.
This photo was taken August 22nd which makes them about 10 weeks. 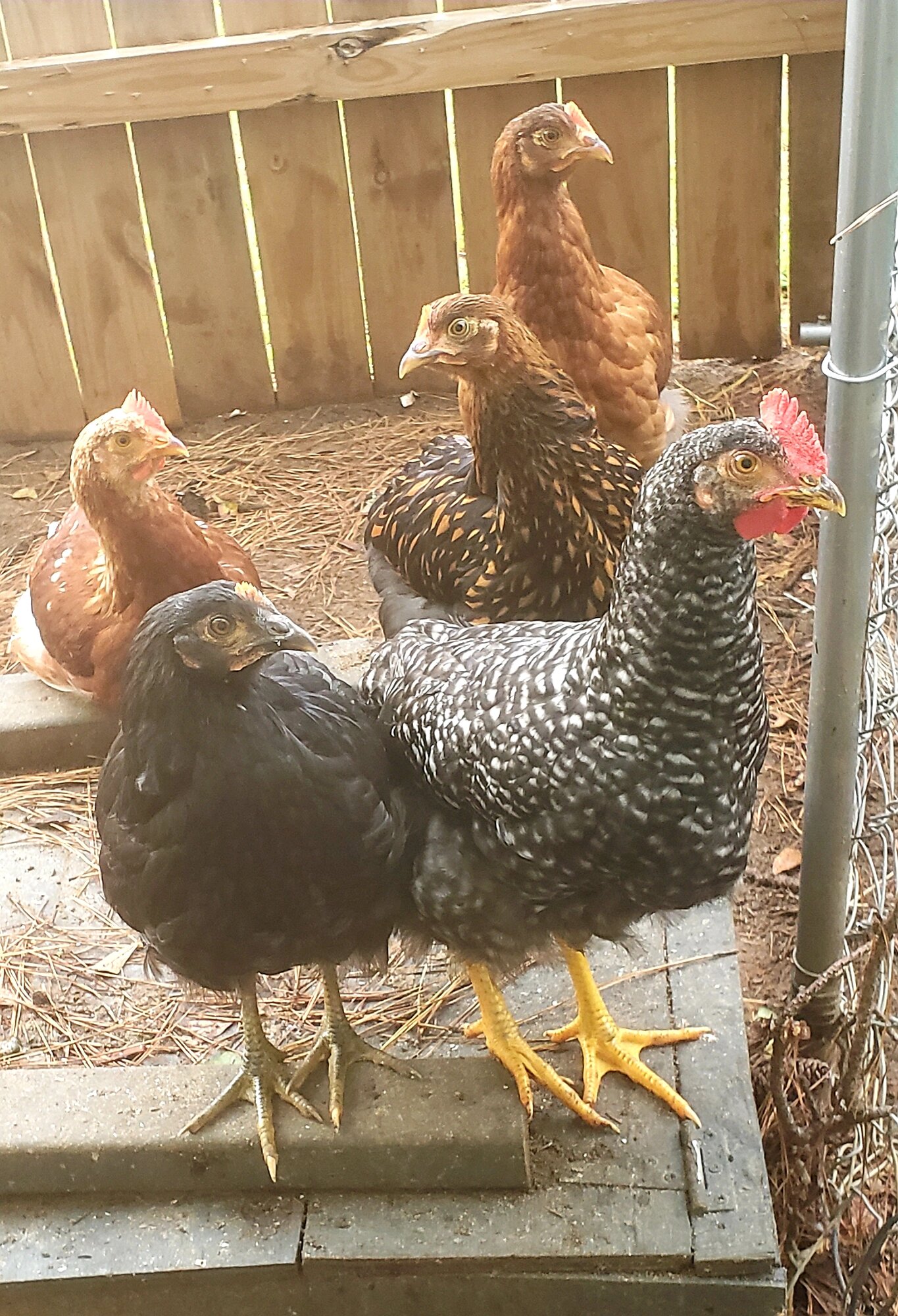 Here are the last two boys. A friend of mine took them a few weeks ago, turns out they are growing saddle feathers. They are boys, so i took them back and she is going to take two of the pullets.
The one standing is the male RIR/Wyandotte cross. He is massive and almost the same size as the adult hens, at 10 weeks. He might be my keeper rooster. Note the lacing on his tail. He looks a little scruffy, but in a few weeks he won't look like the same bird.
The silver laced is a carbon copy of the hen he came out of, he also has saddle feathers growing but they are not currently visible. 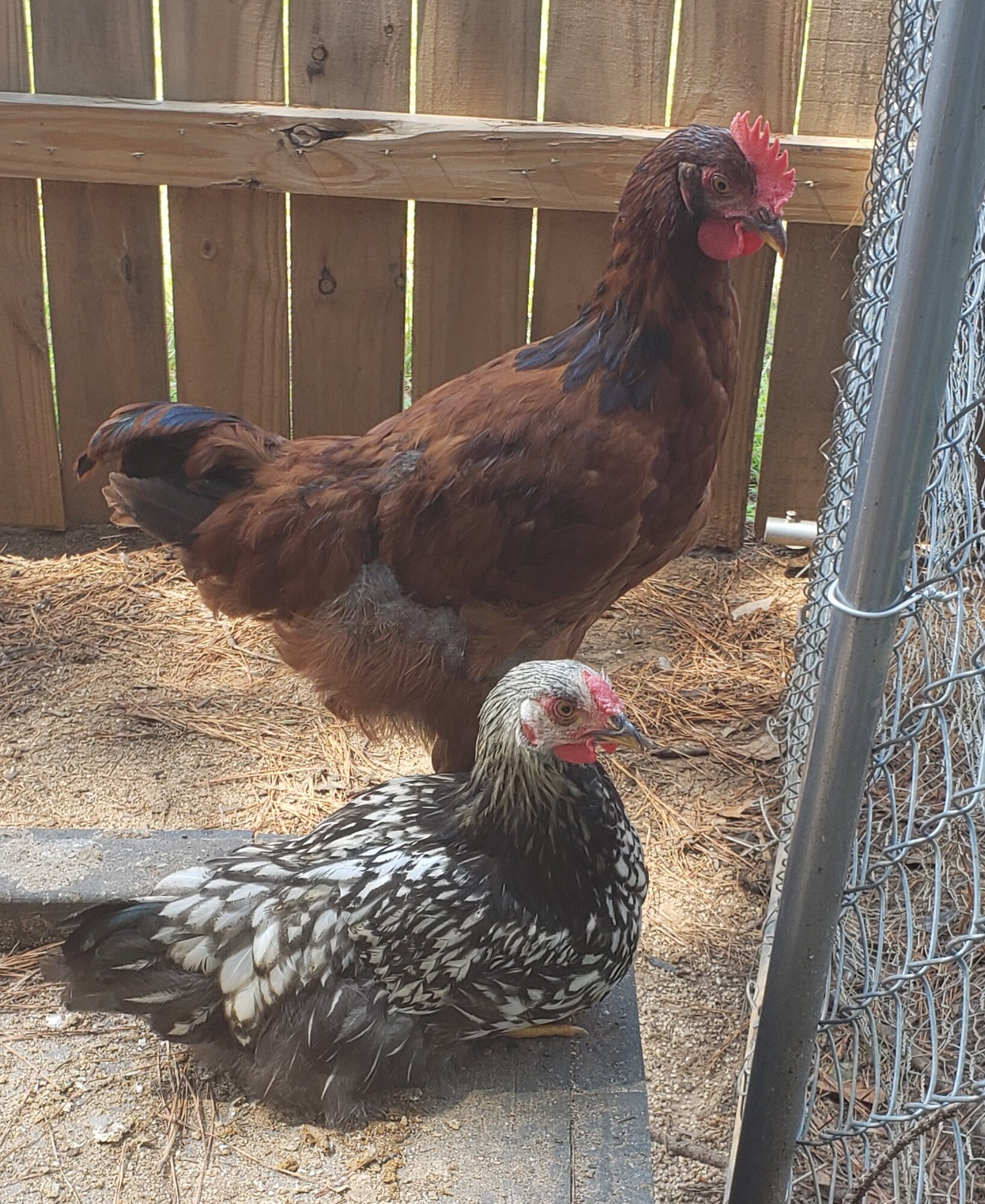 Aside from my keeper pullet, and the two pullets leaving for my friends house, and my keeper cockerel (haven't made final choice) the rest will be culled for the freezer.
I find genetics super interesting. Let me know what you guys think!
Last edited: Aug 27, 2019

... glad you joined! It’s a great place to be!
You have a beautiful flock

... glad you joined! It’s a great place to be!
You have a beautiful flock

Thank you! I think so too

Your Bantam was very handsome, sorry you lost him. Nice looking chicks he contributed to!