Hello everyone, I posted here last spring about the injured duck with the fishing hook stuck in him. He seems to have gone off on his own because after about a month I just never saw him anymore. I hope he's doing ok wherever he is.

Now my current dilemma. Female muscovy had a clutch of 12 last month. That gradually went down to 5 after a few weeks due to predators. She was holding pretty good at 5 for over 2 weeks until this morning I saw only 4 left.

At first I saw only 1 baby all on her own with the Mama and other ducklings nowhere in sight. She was sitting outside my patio in the grass all by herself. I went out to give her some bread and saw the side of her head was an abrasion with clotted blood. Thankfully it doesn't look like a deep cut on her.

I gather a predator swiped her head while taking the 5th duckling overnight. I saw the mama duck with her other 3 babies all the way down the pond and when she saw me she started coming over, but put her head down to shoo her away when the injured baby went up to her.

Do mother ducks reject their babies if they're injured?! Mama and her 3 babies went off again, and the other one stayed in front of my patio all day. I did bring her into the house to put some peroxide over her wound. (that was nearly impossible to do with how much she kept wriggling free)

I managed to get some of it on her and quickly placed her back outside where she's been all day. I THINK she's around 5 or 6 weeks old. So my question is, is she basically a "sitting duck" to predators now?
I'm tempted to being her inside my screened patio to stay until she grows bigger, but afraid that would hinder her growth and wind up killing her anyway.

Should I just leave her alone and let nature take its course? There's about 3 big male drakes that sit near her so i'm hoping they'll provide some protection for her until she gets old enough to be on her own. I feel terrible for the little one.

I snapped a pic and if you zoom in you can see the wound on her head. Can anyone make a guess to her age and if she has a chance to make it out there alone? 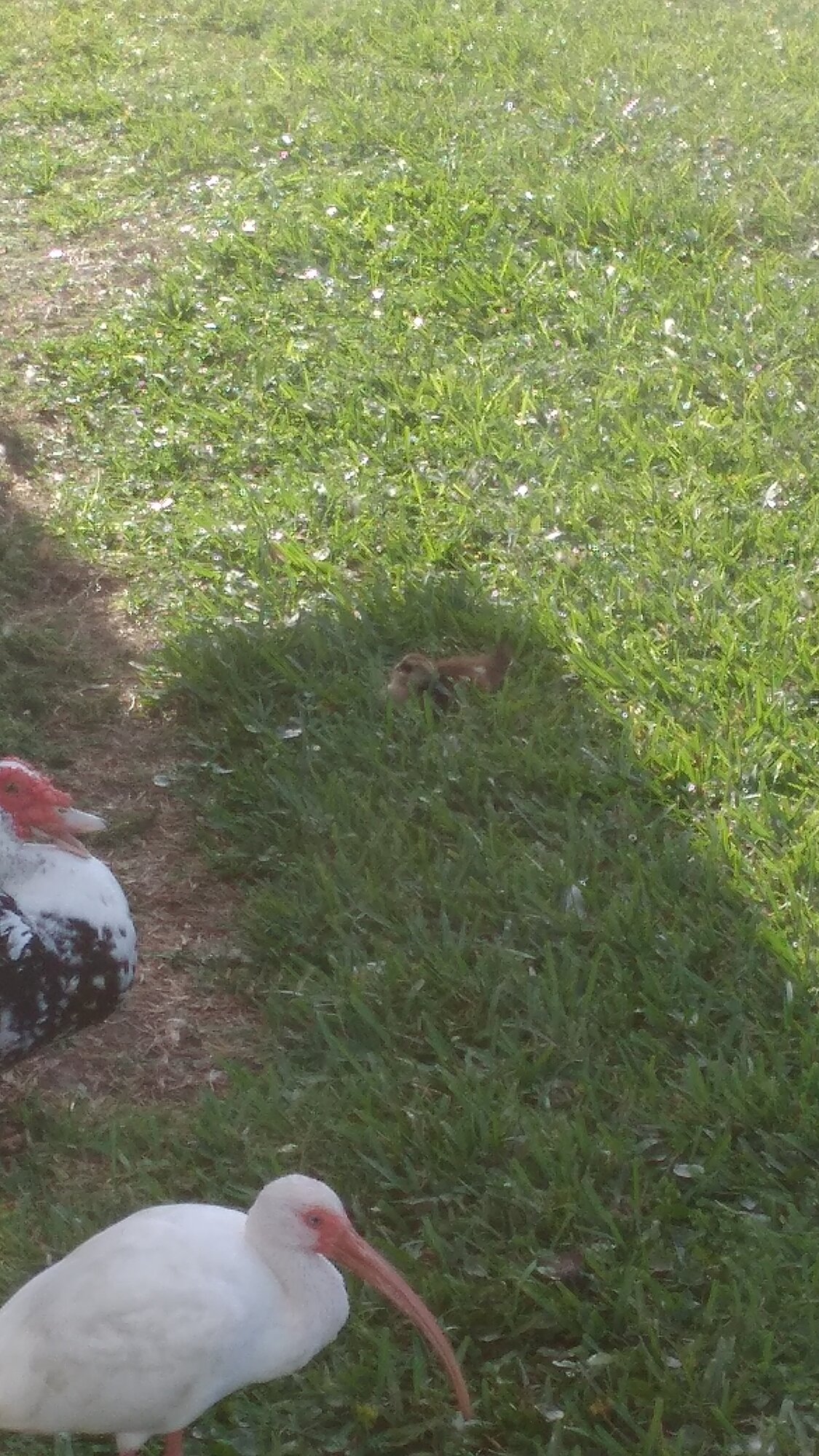 I'm so sorry for your losses. Honestly, i think they are all in danger. Sounds like you don't have a safe area to free range ducks.

Are these your own ducks?

I agree with the above poster.

I think these are feral Muscovy? Yes when one is injured to protect the rest they will abandon the injured one. There is a Muscovy rescue in south Florida if that’s where you are you can look them up on line. Thank you for caring, with blood on her excuse the pun but she is a sitting duck.

Yes they are all wild ducks. I live on a pond where they all live out there in the wild. The mother just came with her other ducklings and the injured one went to the brothers and sisters, but the mama shooed her away and she scurried into a corner by my ac unit and is sitting there alone while the mama and siblings went off again.

I managed a closer pic of her. The injury doesn't look bad to me, just an abrasion. Nothing that would hinder her ability to walk, run and eat. If I bring her inside my screened patio to keep her safe from predators until she gets bigger will that just do more harm to her?

Does she look old enough to survive on her own? My guess is she's 5 to 6 weeks now. 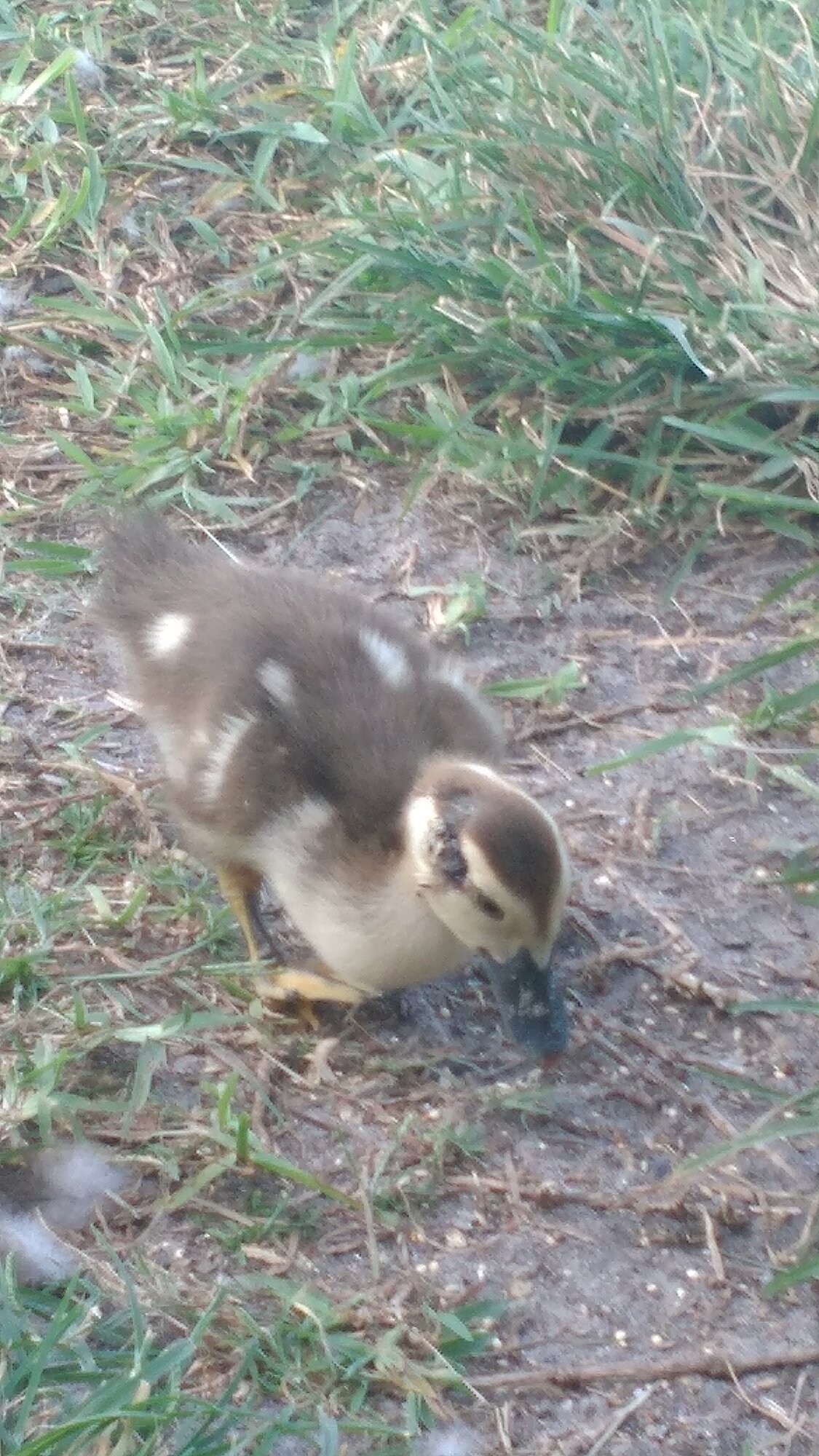 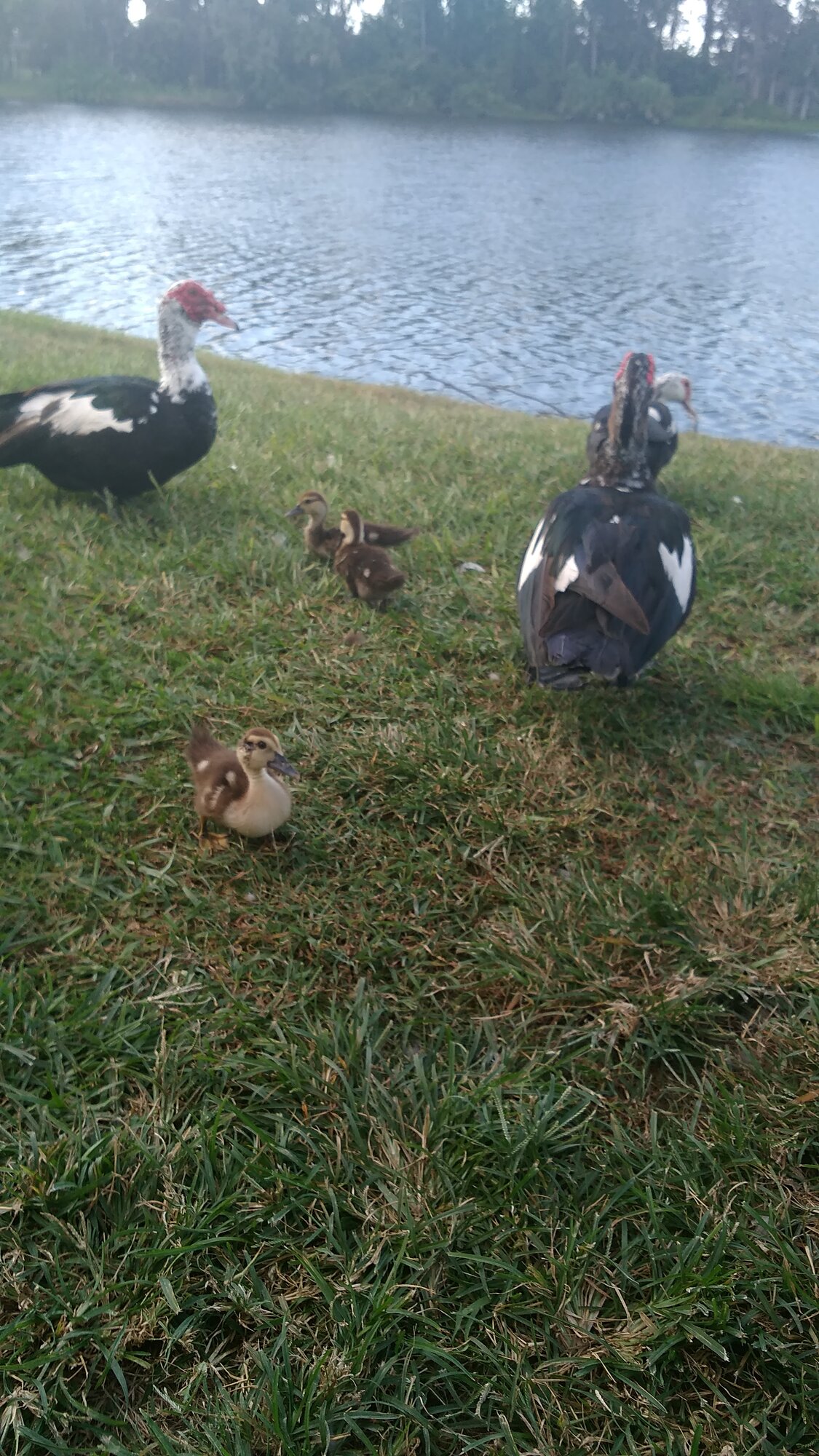 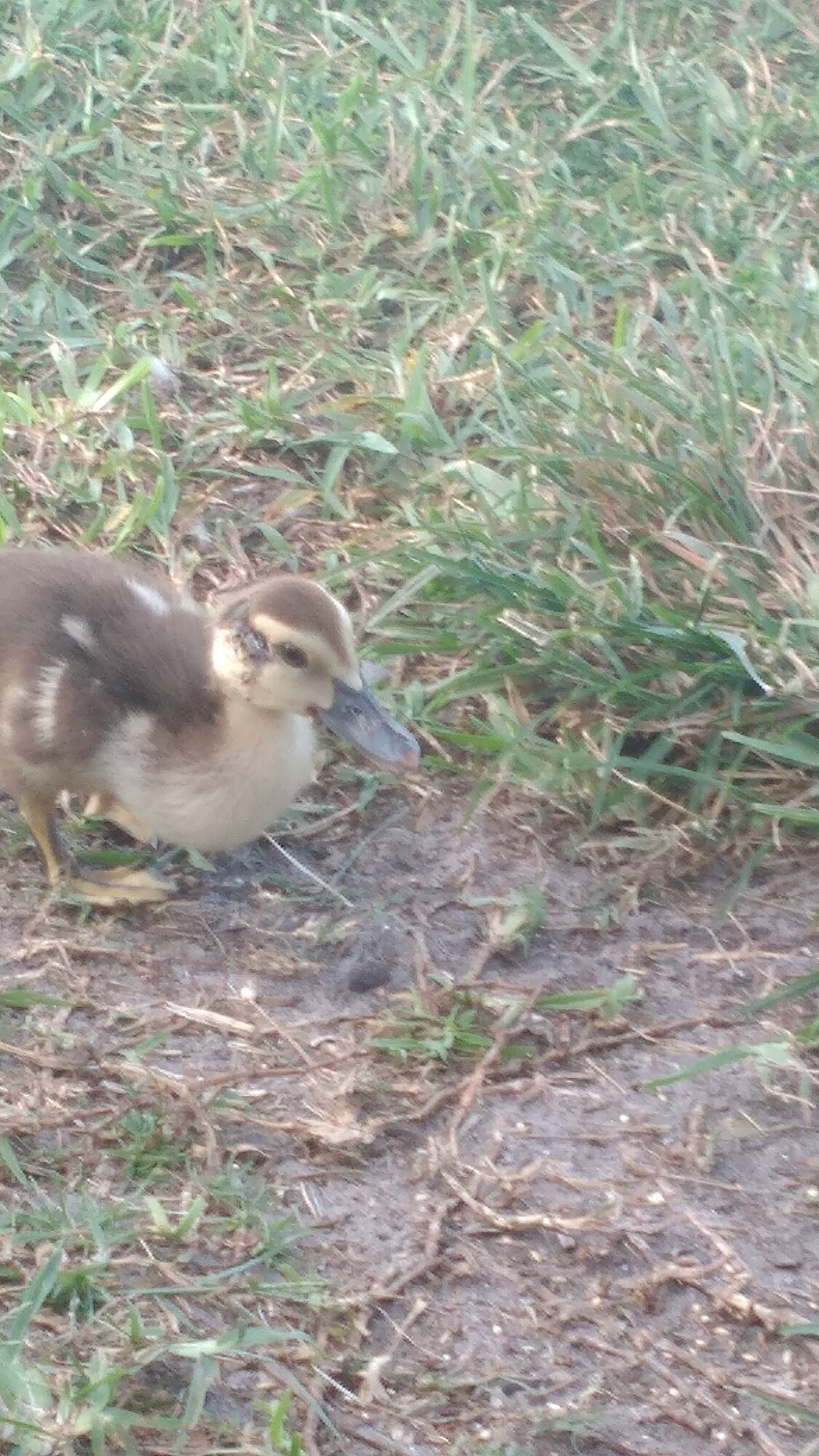 I'm in Orlando. Don't think there's any wildlife rescue near me. I remember from when the duck last spring had the fishing hook stuck in him, there was no one nearby to call.

Well, since they are wild ducks, I'm not sure what you could do. Hopefully someone with a lot of duck experience will come along and help out here.

If I put her in my screen patio to keep her safe will that cause her more harm? She's about 5 or 6 weeks old.

How much longer until they're old enough to fend for themselves out there? I know they grow pretty fast so if she can survive another 2 or 3 weeks, will her wings and feathers be full grown by then?

I have a large Rubbermaid tote I can place her in inside my screened patio if that would help keep her safe until she grows big enough to fend for herself.

She is a target because she is young and I know even if she was with her mama she’s still be in danger as you’ve pointed out from others disappearing but by herself she stands no chance. If you bring her in you’ll have to provide more than bread they need a diet that’s meant for them like a poultry feed or water fowl feed. And ducks are extremely messy so think about this before deciding. I love my Muscovy and usually by 5-6 weeks they are on their own but here they are protected by me there they are pretty much on their own.

chris330r said:
If I put her in my screen patio to keep her safe will that cause her more harm? She's about 5 or 6 weeks old.

How much longer until they're old enough to fend for themselves out there? I know they grow pretty fast so if she can survive another 2 or 3 weeks, will her wings and feathers be full grown by then?

I have a large Rubbermaid tote I can place her in inside my screened patio if that would help keep her safe until she grows big enough to fend for herself.
Click to expand...

I understand your main question is whether you should take her in and get her well and bigger. There are people at the Humane Society who know how to do this without completely imprinting on the bird. I wonder if the duckling will become dependent on you for food once you put her back outside. They learn how to forage from their mamas.

To catch a duck